A Discussion of Time Bomb 2000 (Prentice-Hall, 1997) by Edward and Jennifer Yourdon, Data Smog (HarperCollins, 1998) by David Shenk, and Why Things Bite Back (Vintage Books, 1997) by Edward Tenner.

End-of-decade and end-of-century musings are not uncommon in western societies. Sometimes these periods were marked by wild ravenings and occurrences when people—indeed whole societies—seemed to go crazy and do outlandish things. For instance, historian Barbara Tuchman tells us in her award-winning study A Distant Mirror that during the Middle Ages people deeply frightened by the bubonic plague and other natural disasters, which they understood to be divine judgements, sought reconciliation with God in bizarre rites of self and social abasement. That was then when societies were fundamentally God-directed and deeply religious.

Today, our western societies are thoroughly secular and yet, still being human, are at root religious. The "god" in which we have been placing our trust for the past couple of centuries or so is Science and Technology. Our obedience to this god has been exemplary. Our societies are so thoroughly technological that they would devolve into chaos if a technological meltdown occurred. Our technological systems do not merely support our way of life, they effectively define our world.

Modern technology is a system of inter-related and inter-connected technologies that change us and the way we see the world. As one commentator has helpfully put it: technology is not simply a better tool, a mere extension of ourselves; it is more like a prosthesis to a crippled person. It is a part of us, opening up possibilities that did not exist and could not exist with merely better-designed tools. Like eyeglasses, technology influences how we "see" the world.

With Science and Technology as our god, with technology so deeply embedded in our cultures that the two are indistinguishable, and with the end of the millennium approaching, the questions we are likely to ask are not going to be about reconciliation with God. No, our musings are likely to be about technology: where it has led us, how we are to relate to it, or possibly escape from its all-embracing web. In short, where centuries ago the most serious threats to societies were natural, today the threat is technological. We seek reconciliation with our modern god.

Are we in fact threatened by our god, Science and Technology? The judgement, according to the authors of these three books, is a resounding yes. For instance, Edward Tenner describes these threats in his stimulating and entertaining book Why Things Bite Back: Technology and the Revenge of Unintended Consequences. Anyone who has used a computer, a telephone, a fax machine, or an ATM will feel the meaning of "revenge" when one of these fails. When your hard drive crashes and you haven't backed up you are bound to feel that technology is trying to get even in some way.

That isn't true of course. What we are experiencing is the failure of some small component of a complex technological system (as opposed to technical, stand-alone devices) which, because of its complexity and inherent instability, can have unforeseen, unintended consequences when a part of it fails to operate properly. Complex systems are inherently unstable because we cannot know precisely how every sub-system will respond to every possible condition. Today, even our mundane technologies like calculators and telephones are incredibly complex.

Our technologies are also closely connected to one another. A failure in one ripples through to others, gathering momentum and weight, as it were, like a tidal wave after a small quake far away. Complexity and connectedness function together. "Complexity makes it impossible for anyone to understand how the system might act," comments Tenner. "Tight coupling spreads problems once they begin" (20).

Tight coupling and complexity explain the enormity of the so-called year-2000 problem or "Y2K." Edward and Jennifer Yourdon, the authors of Time Bomb 2000: What the Year 2000 Computer Crisis Means to You!, comment on the seeming insignificance of the problem—years being represented by two digits instead of four in computer software. They quote someone's disbelief. "It's like reading through 900 pages of Gibbon only to be told that the decline and fall of the Roman empire was really due to a bad case of head lice" (374).

It does indeed seem like that, but the unpleasant reality is that since our computer systems are pervasive, complex, and closely-coupled, a small problem quickly becomes huge, as the Yourdons document. Almost every aspect of our lives will be negatively impacted by Y2K: our jobs and workplaces; utilities (telephone, electricity, water); transportation systems (trains, buses, cars, planes, guidance systems); banking and finance; stock markets; delivery of food; home computers; news and information sources; health delivery systems; governments; education; and so on. Little will be left untouched at the turn of the millennium. This is technology's revenge.

Yet another revenge is the information overload that daily gushes from our complex, inter-connected, communications and information technologies. This is the irony of our information age; we have more information at our command than any other society in history, and yet we're incapable of using it wisely. David Shenk examines this phenomenon in his book Data Smog: Surviving the Information Glut, defining data smog as "the noxious muck and druck of the information age. Data smog gets in the way; it crowds out quiet moments, and obstructs much-needed contemplation. It spoils conversation, literature, and even entertainment. It thwarts skepticism, rendering us less sophisticated as consumers and citizens. It stresses us out" (31).

Shenk is no technophobe. He calls himself a technorealist—one who "appreciat[es] the benefits of technology while recognizing and responding to its drawbacks." He can be contrasted with Jacques Ellul, that French scholar, resistance fighter, and social activist, whose beef with the pervasiveness of technology and technique is its tendency to focus solely on the "one best way" to the exclusion of all other ways that would have been appropriate but which were considered less efficient. By warning us of its dangers, its inherent tendency to narrow and diminish life, Ellul wanted us to get off the technique/technology bandwagon. Shenk, on the other hand, accepts technology, indeed embraces it; but he also wants to filter out the noisome data overload that our technologies have produced in order to create a more peaceful island of controlled information flow in a turbulent sea of trivia.

For those who use Internet accounts or corporate e-mail, Shenk's desire not to be "a victim of the information glut" is understandable and laudable. He has a number of suggestions, some of which rely on the individual person (wherein resides "the awesome responsibility of self-editing, of information restraint") and others of which call for government regulation ("cities and states should guarantee refuge from data smog"). It appears a bit like trying to control a cloud; it's insubstantial, and it reformulates itself ceaselessly. In the end you have to ask yourself whether it's at all possible.

It is possible, but like weaning yourself from junk TV, it is primarily a personal thing, requiring a lot of self-discipline. Governments can and should regulate TV content. Getting rid of the junk, however, is a personal option only. Shenk says that "television is physically hypnotic" and psychically it offers "an extremely comfortable way to forget about our troubles" (186). For many, always having the latest in technology and always being up-to-date with "breaking news" is addictive and just as hypnotic as television. The problem then is not technological but personal and internal.

Tenner agrees with this interpretation, saying, "What really appears to be a technological question—how much of anything we really need—is in the end a social one. . . . Human culture, not some inherent will of the machine, has created most revenge effects" (352). His solution is to "de-intensify" technology, to let potential fields for technological cultivation lie fallow, as it were, or introduce to them alternative, less intensive, technologies—a process of diversification as well as de-intensification. It is the use of finesse in our approach to the problem of technology's revenge. "It is the substitution of cunning for the frontal attack," says Tenner.

Both Tenner's and Shenk's suggestions, although different in many ways, can be reduced to two common factors: the need for personal, human will to do things differently, and political will where necessary. Both these authors—Tenner explicitly, Shenk implicitly—recognize that technology's revenge, although painful, has a value. Tenner comments, "The real question is not whether new disasters will occur. Of course they will. It is whether we gain or lose ground as a result. . . . It is whether revenge effects are getting worse or milder. I think, but cannot prove, that in the long run they are going to be good for us." Why? Because these failures make us think more deeply about what we're doing. They force us to be vigilant.

The year-2000 revenge, for instance, could have been avoided easily by early vigilance. But the crunch was seen as something that wouldn't come for years; something would probably be done in the meantime, many assumed. Now, of course, we will likely have to pay dearly indeed for our facile neglect. But, to follow Tenner's argument here, the enormity of the catastrophe that may descend upon us come January 1, 2000, and for months, perhaps years, afterward may well be the Titanic-event that finally prompts us to take more care up-front, not later when the cost is so high. (The Titanic sinking, Tenner points out, prompted legally mandated iceberg surveillance and reporting which continues today with aircraft and satellite.)

As the old saw has it, "Nothing concentrates the mind like impending death." We are like the condemned person. Our highly complex, tightly-coupled, inherently unstable, technological society is figuratively facing death. The question is, will the millennial concentration on things technological be sustained long enough to do us some lasting good? 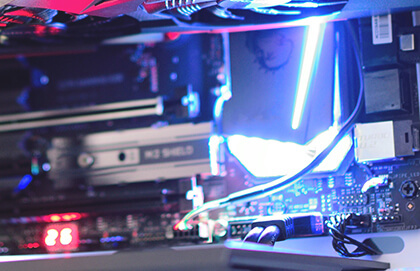 The God of technology, or the god of Technology?

A thoughtful theology to transform our relationship to tools and technology.

Business and Technology: An Integrated View

Technology is not just for "IT people" any more.