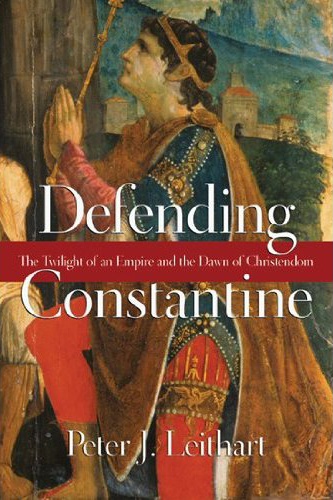 Defending Constantine: The Twilight of an Empire and the Dawn of Christendomby Peter J. Leithart. IVP Academic, 2010. 373 pp.


Most agree: Constantine was a bad boy. Today's Christians, pietistic ana-Baptists and culture-transforming Reformers alike, often conclude, politically, that Constantinianism—some call it caesaropapism—was a bad call. Secular reflection clearly concurs. Constantine and the subsequent collapse of the western Roman empire ushered in what is casually called "the dark ages." When you get stuck with the bill for a whole period with that name, you know you've got a tough reputation.

But is the vilification justified? Peter Leithart argues in Defending Constantine that it's not. His key argument is that Constantine has been read backward through the embarrassment of colonial Christendom, and—especially—John Howard Yoder's and Stanley Hauerwas's sharp criticisms of the political corruption of the Church. Leithart presents an unapologetic historical polemic directed against the positions of two of America's most powerful and articulate theologians.

Americans want to know about Constantine because he is the first (though certainly not only) major Christian to wield tremendous (super)power. And indeed, the world and many Americans understand America to be a Christian state, one which has emerged in the last two decades as a hegemonic superpower.

Protestants in the developed north have made a cottage industry out of guilt-ridden angst over their concentration of power and money. Take, for example, the historian Simon Schama's landmark book The Embarrassment of Riches, or Ron Sider's now-famous Rich Christians in an Age of Hunger. Defending Constantine is one more chapter in that long conversation. This book centres around these very old and basic questions: What does it mean when Christians have power?

Yoder and Hauerwas are brilliant precisely because they ask the prior question: Should Christians have power, if Christ's kingdom is not of this world? Leithart starts to edge us deeper still by asking whether there is any settled consensus on how religion and power relate—and, perhaps most brilliantly, whether it meant the same thing for Constantine as it means today to those trying to apply it in superpower twenty-first century America.

Which brings me to one of my few disappointments with Defending Constantine. Leithart skirts just shy of articulating a really incisive criticism of Yoder's and Hauerwas's theology, missing the opportunity to actually make deeper historical criticisms of the whole practice of contemporary Christian political theology. Quite aptly, it is William Cavanaugh's thesis (who provides dust jacket endorsement) in The Myth of Religious Violence that ought to be extended into this conversation: There is no such transhistorical, transcultural thing as religion—that is to say that religion, in the modern meaning of the term, did not exist in Constantine's era. To say that he mixed religion and politics in a corrupting way is not only completely wrong. It's actually historically unintelligible.

What modern states think of as the separation of church and state was an invention of the modern period, rooted in the European religious wars of the seventeenth century. This is the brilliant irony: the corruption of religion by secular politics that Yoder specifically laments is comprehensible only if we accept the liberal and Enlightenment narrative of the state. That narrative simply did not exist for Constantine. Constantine's narrative was closer to Julius Caesar than John Locke. And when Caesar made war with his Roman legions, it was no mere exercise of state power—it was with cultic sacrifice and fealty to the gods. It's too easy to forget that the Pope's inherited office of pontifex maximus—high priest of Rome—has, among its forebears, many a Caesar.

Leithart does come around to this when he (somewhat anachronistically) draws John Locke into the fourth-century conversation, arguing that the Lockian doctrine of religious toleration amounts to the practice of public religious tyranny. He writes, "Constantine had many faults and committed many wrongs, but he apparently knew this much: neither society nor social space, neither public life or the space in which it takes place, can be religiously neutral."

Leithart also makes an effort to paint Constantine as a tolerant emperor, ahead of his time in the practice of religious freedom. This is a bit of a stretch, but the fundamental point is instructive: Constantine saw his religion as an integrated continuum with his politics. He did not use religion to unify his empire, as though it were some kind of externality. Religion and its duties were bound to the very heart of Roman public and private life. Therefore, Constantine's conversion also meant political change; not because of some novel, odious mixing of theology and empire, but because fourth-century Rome didn't know any different. He was still centuries from the careful liberal dissection of religion from public life that Yoder and Hauerwas implicitly project.

An interesting thought that Leithart mentions only as a half-hearted aside: why not challenge historical readings on Constantine in the context of the Byzantine Empire? If ever there was Christendom, it was in Byzantium. Medieval scholarship has long since qualified the collapse of Rome in 476 by noting that, in fact, the empire survived and even thrived for many centuries after this point in the East—in (of all places) Constantinople. Shouldn't the hegemonic and corrupting outworking of Constantinianism be most marked in that context, if this thesis were true? This, argues David Koyzis, is explicitly not what happened in Eastern Orthodoxy's iconic political ethic, a political theology which survived Constantine by more than a thousand years.

Of course, what I've called this book's strength could also be argued against it as a weakness—namely, one might argue that Leithart has prostituted historical data in a fashion that suits him for trendy theological mudslinging. But that's a hard criticism to stick, since Leithart unapologetically states that intention straight out. In fact, what he has done is unique, because his argument is really theological, but uses historical data. The idea that theology is a series of disembodied ideas which can be abstracted and debated apart from context seems self-evidently wrong. But not everyone recognizes this: consider the rise and growth of missional churches trying to "get back" to the first century and the church fathers. This naively purist ecclesiology is exactly what Leithart has in his crosshairs.

This book balances rather than exhausts Christian political theology. It gives real weight to the shocking inversion of Christian power in the third and fourth centuries and sympathetically reads the plight of struggling Christians to make good, to make a proximate justice, with the tools of their day. It was awfully far from perfect and occasionally barbaric. But it was also far from its characterization as the unqualified corruption of the church. Christians wrestling with power today should take heart, rather than shrink from, the long, difficult inheritance of religious and political history that this book brings us for fresh insight.