If we want to support local farms and businesses, we need to ask questions about how best to use technology toward that end.

Locavorism is alive and well in this semi-urban inner suburb of Washington, D.C. The county hosts a farmers market almost every day of the week, and a constellation of "urban villages" boast restaurants making signature sausages and churning ice cream with milk from nearby dairies. Earlier this year, a locally-owned restaurant group opened a cafÃ© and wine bar that quickly became a popular spot for the neighbourhood's young professionals to plug in their Macs (by day) or share a bottle of wine (by night).

As a nearby resident trying her best to support independent businesses and eat local produce, I watched the development of this place with great interest. Months before it opened, I walked by the historic house it now inhabits and peered in the papered windows. I looked for signs of counters, stools, bags of coffee. When would it open? How could I find out more about it?

I became a Facebook locavore. When I didn't know whom to ask, I asked the internet. A quick search revealed a Facebook page dedicated to the forthcoming cafÃ©, and I learned the names of the manager, sommelier, and pastry chef. A post announced when the espresso machine would be delivered. When the opening was delayed, friendly notices were posted. The Facebook page helped me feel invested in the project and created a sense of anticipation. When the café finally opened, I went to order my first cup of coffee and smiled knowingly at the hip baristas. "Isn't this great?!" I said, without actually saying it, "I'm so excited to be here and to try your locally-roasted coffee."

The new café's Facebook page is just one example of how technology enables locavorism. My husband and I joined a community supported agriculture (CSA) program last spring. I found it online and each week a blog announces what we'll be receiving, along with recipes. The food section of The Washington Post (print edition!) recently exhorted me to visit its website for a Thanksgiving list of local turkey suppliers. Even the tech-savvy contributors to Wired magazine have joined the locavore movement; a recent article diagrammed how to maximize a small backyard for urban farming.

In urban neighbourhoods, websites and social media can be invaluable resources for residents looking to support local farms and restaurants. But being a locavore doesn't guarantee a commitment to the local community. There is a difference between using Facebook as a tool to become connected in reality and using it to feel connected. When I stepped up to order my first latte at the new café, my smile feigned a real relationship with the café's employees and patrons; I had only a virtual one. But my Facebook familiarity seemed sufficient. There were a lot of people in line—it seemed best to just smile and hand over my VISA.

Urban locavorism has distinctive features, and one of those features is the integrated role of technology. If we want to support local farms and businesses, we need to ask questions about how best to use technology toward that end. Does checking the location of a nearby ice cream shop on your iPhone encourage locavorism? Yes. But what if you tweet while selecting the flavour? ("Sampling chocolate & coconut @ great local scoop shop.") Do you look at the person serving you and say "Thanks?" Why do we feel the urge to celebrate our local purchases electronically? (Full disclosure: In early October, I updated my Facebook status to brag about my Virginia-grown pumpkin.)

After a year and a half in Arlington, I have sampled fantastic produce from dozens of area farms. But I don't know any farmers. Facebook locavorism may be a condition more likely to afflict urban neighbourhoods. The farmers market is often too crowded for an extended chat and it's easier to settle for the cultural currency—and high self-esteem—that comes with publicizing one's local purchases and eating habits online. I know it's naÃ¯ve to romanticize returning to small town values and patterns, but perhaps it is easier for rural communities to foster relational foodways without resorting to status updates and Google searches.

In his chapter in After Modernity, Norman Wirzba employs the term "agrarianism" where others might use locavorism or localism. When being a locavore means documenting consumption online rather than building relationships in person, Wirzba's definition of agrarianism is a helpful corrective. He insists the concept is not a "throwback to some pastoral arcadia;" it is

"a comprehensive and compelling worldview that aims to understand human life in terms of its practical and concrete interdependence with all other life. . . . [It] represents the sustained attempt to live faithfully and responsibly in a world of biological and social limits and possibilities." (244)

Is there a place for smart phones and Facebook in this description of what it means to live locally? I think so. But consider the last phrase: "biological and social limits and possibilities." We can—we need to—understand both our limits and our possibilities; one does not preclude the other. We can support our local community while satisfying our impulse to be connected virtually, but we need to consider how constant connectivity strains our biological and social limits.

As part of its series, "Your Brain on Computers," the New York Times ran a report on how our devices push us to multi-task. Clifford Nass, a communications professor at Stanford University, explains how heavy technology use causes physical presence to lose its power: "The way we become more human is by paying attention to each other [â€¦] It shows how much you care." The article continues, "That empathy, Mr. Nass said, is essential to the human condition. 'We are at an inflection point,' he said. 'A significant fraction of people's experiences are now fragmented.'"

As Christians seeking to invest in our local communities, the spectre of fragmented interactions with our neighbours (including hip baristas) should be a larger concern than where we get our eggs. Perhaps we should take another cue from the New York Times—its magazine recently published a theme issue on "Eating Together"—and use our "buy local" commitment as a first step to building relationships that extend beyond Facebook. 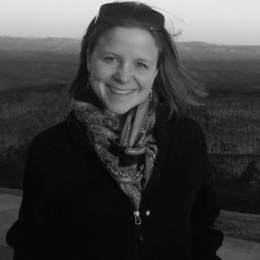 Anna Littauer Carrington is assistant editor of The Review of Faith & International Affairs and program assistant for publications at the Institute for Global Engagement. She graduated from Wheaton College in Illinois, where she studied international relations, served as news editor of the campus paper, and met her husband.