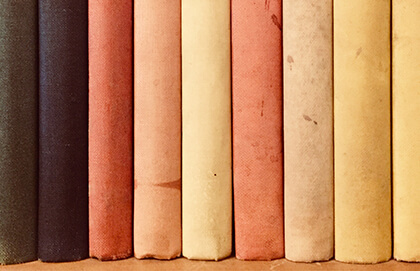 The Joys and Perils of Overlapping Reading

I find myself reading not books so much as suites of books, so that one book feels like an increasingly improbable continuation of a previous narrative—providing balance, connection, surprise.

There are many reasons why I was never able to finish reading Crime and Punishment—the type was a bit on the small side, the names and the chapters were a little too long, the plot reminded me of a bad experience I had in high school—but, in hindsight, I'd say the blame falls heaviest at the feet of two men. I am speaking, of course, of Gandhi and Hitler.

Allow me to explain.

For much of my post-college reading life, I've been interested in the experience of shifting between texts, in particular the way that, for a short spell, the text I shift to inhabits the same mental space as the one I've just left, so that the second book feels like an increasingly improbable continuation of the previous narrative. Say you're reading Great Expectations and just as your expectations begin to flag, you switch volumes and the scenery becomes more agreeable, the prose less stultifying, the seedy incidental characters more plausibly named, till at last you give in to reality and admit that you've abandoned Dickens for Graham Greene. Better yet, you can shift genres entirely. Sociological surveys may suddenly, with a little sleight of hand, contain sonnets.

Walker Percy talked about something like this experience in an essay about education and expectation called "The Loss of the Creature":

I wish to propose the following educational technique which should prove equally effective for Harvard and Shreveport High School. I propose that English poetry and biology should be taught as usual, but that at irregular intervals, poetry students should find dogfishes on their desks and biology students should find Shakespeare sonnets on their dissecting boards. I am serious in declaring that a Sarah Lawrence English major who began poking about in a dogfish with a bobby pin would learn more in thirty minutes than a biology major in a whole semester; and that the latter upon reading on her dissecting board

The time of year Thou may'st in me behold
When yellow leaves, or none, or few do hang
Upon those boughs which shake against the cold—
Bare ruin'd choirs where late the sweet bird sang.

Fish spoil too easily on bookshelves to fully implement Percy's idea—though, come to think of it, a friend did once bring me a book titled Shark! Shark! that he'd come across on the way to his lab work at Harvard's Museum of Comparative Zoology, all about killing as many sharks as possible with unadulterated 1930s gusto. It was bound in a flaky red leather made, the colophon informed me, from dogfish skin.

Still, the point on practicality stands. But within the world of books, you can do a lot to ensure the occasional dogfish in your sonnets, and vice versa, just by carefully choosing (and, perhaps as importantly, not choosing) the kind of company a given volume keeps. So I find myself reading not books so much as suites of books. To this day I keep five or seven bookmarked volumes by my bedside, just in case my latest novel could do with a few pages of Spanish, or of scripture.

In fact, I laid the foundations for this habit by reading the Bible, first through various lists and studies and the theologically dubious Open-at-Random Lectionary, and more recently, the daily readings listed in the back of the Book of Common Prayer: Old Testament, Psalms, Gospel, New Testament—suddenly a goofy bit of Ancient Near Eastern crime-solving can indeed give way to a glorious psalm, which itself bleeds into a narrative discussion of winds and harbors on the southern shore of Crete.

Reading the Bible daily has taught me to exult in the transitions between surprisingly varied voices and lowercase-authors, trusting that it all does relate, so that however and in whoever's hands the mechanics of divine inspiration worked out, I can trust in its capital-Authorship. In its way, it's an expectation that seeps into my other reading as well.

When picking a suite of books to read, you have full randomness and serendipity on the one hand (the Percy method), or deliberate and thoughtful contrast on the other (the Lectionary). In my reading life, I've swung back and forth between both approaches; usually the suite I end up with is a muddle of the two modes, and nine times out of ten it gives me the experience I'm going for—of letting the voices and narratives seep into one another in surprising ways, providing balance, connection, surprise.

Every once in a while, though, it all can go horribly wrong. Ten years ago, I spent a summer reading many biographies and was fascinated with both what makes a given life stand out from other lives and what makes given a biography stand out from other biographies—which is almost, but interestingly not quite, the same thing. I wondered what would happen if you pushed the extremes of the genre, mashed together the most and least exemplary lives of a certain era, and saw what traits and quirks emerged. Thus was born my plan to read alternating chapters of the autobiographies of Hitler and Gandhi, to see what I could learn by quickly switching between the two.

There was, I still admit, a nice symmetry to the pairing. They were, after all, the middle 20th century's most infamous one-name exemplars of history-altering good and evil, and their equally odd autobiographies were published more or less simultaneously (the volumes of Mein Kampf were published in 1925 and 1926; The Story of My Experiments with Truth was published weekly between 1925 and 1928 as a series of columns in the Gujarati magazine Navjivan).

"Mein Experiments with Kampf," as I called the project, started out reasonably well, as I noted the parallels between the two men's boyhoods, their struggles with shame, their observations about the power of youth. They had their respective quirks: Gandhi pitched alternative medicine, including an all-fruit-and-nuts diet (a friend of mine suggested the book should have been called "My Experiments with Food") and a cure-all that involved putting wet dirt on your stomach before you went to sleep. Hitler, meanwhile, railed on as expected—against the latest fashions, against architecture he didn't like, against un-German songs, and (inevitably) the Jews. Actually, the future-führer had only just started in on that when the see-saw of alternating chapters got to be too much. I'd hoped the project would reveal nuance and surprising insight, but the only thing I got besides the obvious conclusion—that Hitler was the bad kind of crazy, and Gandhi was the good kind—was a series of splitting headaches.

My breaks from this Manichean battle of the autobiographies were filled by a third book, which I happened to have started a few days prior: Dostoyevsky's Crime and Punishment. It seemed a happy accident: perhaps the latter's moral investigation would shed light on my dueling heavyweight eccentrics. But instead it pulled it all down: the ever-madder, ever-badder Raskolnikov's overthought craziness bled into Hitler's, tainted Gandhi's. The only balance it afforded was a knot in my stomach to go with my headache.

Just as Raskolnikov develops all of these elaborate justifications for his plot to take an axe to the local pawnbroker, and then kills the pawnbroker's half-sister too because she happened to be in the way, my own perfect plot flew apart and took poor Dostoyevsky with it. Not halfway through all three volumes, I realized it was time to give up—I wasn't doing justice to anyone involved. The bookmarks came out and I returned all three to the library, being careful to make sure nobody was looking when I dropped Mein Kampf into the slot.

It was my most spectacular failure as a parallel reader, and it took some time (and a Walker Percy biography or two to fortify the soul) to gather up the pieces. I still choose my titles and seek out serendipities, but a lot less audaciously now. One day I hope I'll make it back to Crime and Punishment and finally find out how it ends. Till then, though, there a few more books, and suites of books, I want to start and switch between.

On the genius of the OED, and other idiosyncrasies of everyday English.