The Legacy of Max De Pree

Max De Pree served for over 40 years with the Herman Miller Corporation. He held a variety of positions, leaving his mark most profoundly as CEO and chairman. During his tenure of leadership, Herman Miller was one of the most respected companies in the United States, continually studied for its people-centred management, its successful innovation, and its strong return to its shareholders.

In recognition of his outstanding leadership, Max De Pree received a wall full of awards. He was elected to Fortune's Business Hall of Fame and received the Lifetime Achievement Award from the Business Enterprise Trust. Almost every major study of leadership written in the 1990s contained some reference to Max De Pree and the legacy he left at Herman Miller and far beyond.

The legacy beyond Herman Miller took three distinct forms. First, he gave himself to service on the boards of non-profit institutions to which he was committed. He invested his wisdom and his resources, providing consultation, coaching, and accountability.

Second, the legacy of Max De Pree has been shared through his writing. His three leadership books—Leadership Is an Art, Leadership Jazz, and Leading without Power—continue to be bestsellers among the literature of management and leadership. With its gentle story-telling style, Leadership Is an Art has become a must-read and re-read book in many languages for leaders all around the world. Max De Pree's little book about his granddaughter, Letters to Zoe, did not see wide circulation, but has been a poignantly powerful book for those privileged to read it. He has also published a new book, Called to Serve, on the development of boards in non-profit organizations.

Third, Max De Pree's legacy is found in people. Hundreds, probably thousands, of Herman Miller employees would testify to the impact his leadership had on them, their work, and their families. But there have been a handful of men and women who have benefited particularly from the gracious wisdom of this leader. Over the years, Max De Pree has served as a mentor and friend to a group of younger leaders who looked to him as a model, including myself. His mentorship has been a wonderful gift to me.

For over 20 years, Max De Pree has been my mentor, my teacher, my coach, and my friend. His steady wisdom followed me through the turmoil of various middle management positions, the successes and struggles of 12 years as Regent College's president, and now into a new role where I am charged by a board to promote and continue his legacy.

In my new role with the De Pree Leadership Center, I am looking at Max De Pree through a new lens. For years he was the model for leadership for me. His philosophy of management and his theology of leadership formed the framework for my forays into leadership. If I was trying to do anything at Regent College, it was to apply the leadership model of Max De Pree to a graduate school of theology.

All in all, I think it worked. But now everything changes. As a person engaged in organizational leadership, I quickly came to learn that leadership cannot be taught. It must be lived. It can be learned, but it cannot be explained in a neat package or formula.

The best article title on leadership I have seen was called "Leadership as Muddling Through." That says it all. Leadership is a messy mixture of people, passions, vision, and constraints pushing and pulling in multiple directions. There is no one way to do it. Not even a right way to do it. It is more a matter of living with vision, character, and integrity in the midst of a network of relationships.

Consequently, I have not been very gracious with the many leadership models that have emerged over the years with their neat steps, principles, habits, rungs, rings, or paths. Occasionally, I would try to put what I was learning into a formula or structure, but it always fell short.

But that is what I am being asked to do now. The De Pree Leadership Center wants to understand and teach the leadership model of Max De Pree, to encourage leadership that nurtures more companies like Herman Miller, to develop more leaders who can serve the boards of non-profit organizations. We are trying to identify the teachable, reproducible factors that shaped Max De Pree and design a curriculum that will encourage other leaders along a similar development path to leadership.

I don't know if it is possible! But let me sketch out some of my thinking as I look into the De Pree Model of Leadership.

Five formative elements seem to emerge in conversation with Max De Pree: mentors and teachers, a philosophy or theology of management, the personal character and integrity of the leader, investing in others, and asking questions.

These five elements appear as recurring themes in the writings of Max De Pree and in his talks and conversations. It seems to me that to understand him you need to spend time with each of these five themes. But foundational to all five is a deep commitment to relationships—first with God then with mentors—because who you choose to follow shapes your leadership.

Whatever form the De Pree Leadership model takes, it will certainly have at its heart the mentoring relationship—the investment of one's self in the life and leadership of another. That may be the essence of the legacy of Max De Pree. 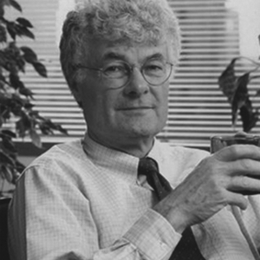 Walter C. Wright, Jr., PhD, is a senior fellow at the Max De Pree Center for Leadership at Fuller Theological Seminary in Pasadena, California, where he served as executive director from 2000-2012. He came to this position after twelve years as president and professor of leadership at Regent College. He sits on the board of Cardus.