The poet's ear for gospel

This summer, when the lectionary cycle of readings had us spend four Sundays reading from the Epistle to the Colossians, I decided it was a good time to revisit Brian Walsh and Sylvia Keesmaat's Colossians Remixed. Subtitled "Subverting the Empire," one of the book's central claims is that at the heart of Paul's letter to the Colossian church is an insistent and resilient demonstration of alternative imagination.

When, for instance, in Colossians 1:15-20 Paul breaks into his great "song of the first-born," he is standing in that long line of prophets and poets who refused to let the empire determine the shape of their imaginations. In a world where the emperor's image was imprinted on everything from coins to public buildings, Paul proclaimed, "Christ is the image of the invisible God." Which means Caesar is not. Regardless of whether that empire is Babylon or Rome (or even Israel and Judah under kings who had succumbed to the glamorous lure of that kind of monarchy), the response of the faithful biblical poet is to beg to differ, and to sing of an alternative possibility.

And according to Walsh and Keesmaat, that challenge is no less pressing today than it was for Paul or for the Hebrew prophets before him. In a social context characterized by a "radically consumptive imagination," we must, they say, follow Paul. "Follow Paul, who was following the prophets. Write and perform evocative and subversive poetry that provides an imagination alternative to the empire's."

It is always a bit dangerous for a preacher to read such a challenging bit of text and to immediately conclude that this is what has been taking place in his or her own church. I do have to admit, however, that I take some consolation in knowing that, from our earliest beginnings back in 2004, at saint benedict's table this has actually been a part of our self-identity. The writing and performing of poetry—primarily in the form of new music for our common life—along with the creation of visual art and the production of books and recordings have been valued, supported, and celebrated in our life together.

Since 2006, we have published three books and produced three CDs of original music, as well as an audio book of lectures presented by a visiting speaker. The latest of our books is a full-colour hardcover collection of art and writings called Beautiful Mercy, produced with an accompanying CD of original music offered by recording artists connected to our church community. It takes a good deal of time and energy to produce something like this, yet we've come to realize that it is work we need to be doing. It changes us.

And in many respects, this young Anglican community in Winnipeg needs to credit (or is that blame?) Calvin Seerveld for moving us in this direction. For when Cal writes in his book Bearing Fresh Olive Leaves of art that is "crafted for God and neighbour" being "spilled like an offering of perfume," or as being "as basic a service as a cup of cold water," it resonates for us.

Cal first came into my orbit when Steve Bell and Gerald Folkerts—two artists connected to our community—kept referring to his work and insisting that I needed to do some reading. And because Cal was scheduled to come to Winnipeg in the fall of 2007 to take part in the opening of a major exhibit mounted by a circle of artists serious about doing "christian art," I started to do that reading in the months leading up to his arrival. I soon came to appreciate his style of writing—what Folkerts loved to call "Seerveldian"—characterized by a kind of grit that made even his most academic speculations ring with a colourful earthiness. His scheduled presence at the exhibit opening gave me a great excuse to invite him to preach at our Sunday worship, which then opened up an ongoing e-mail correspondence, which spurred many of us to explore his work further.

His next visit to our community came in conjunction with yet another art opening, this one a January 2009 exhibit of the work of Gerald Folkerts, who was then in the midst of a nine-month battle with terminal cancer. The visit after that one brought Cal to Winnipeg in June 2009 to preach at Gerald's funeral, where he offered artful words of deep and profound lament-words of a preacher who knew the truth of resurrection even on a day when we felt only loss. In other words, he preached truthfully.

What Calvin Seerveld's writings and teachings and visits with us have done is to give words to some of what we had begun to know in our practice.

His important distinction between "church art" and "christian art" immediately made sense to us. Of his understanding of "christian art," Seerveld writes,

Art that fashions materials to present imaginative, nuanceful meaning, opening us up to the providing, redeeming Lord of the universe, is art the way art was created to be by God and was given for human hands to work with.

And against this, one doesn't even have to define what he means by "church art"; we've all seen it, and we all know its limitations. For Seeveld, it is Christian artists creating "christian art" in this more substantial sense whom the church should be supporting and celebrating.

In this most thoroughly Christian vision, suggests Seerveld in A Christian Critique of Art and Literature,

. . . art and literature as human activity is not simply a harmless pleasurable emotion or a cultured response to unconscious drives which is the artist's own business: this vision takes art and literature and brings it firmly into the presence of God and an earthshaking drama where angels peer expectantly over the human shoulders to see what is coming out of the palette or typewriter.

It is possible to create the kind of Christian communities wherein the poets are listened to, nurtured, and supported. It is possible to take seriously the church's de-privileged and exiled status, and to begin to rise to the same challenge which faced Israel in its exile in the Babylonian empire: that of re-texting the community, of re-membering its core story. Re-texting our communities and re-membering our story, and not only with the preached word (something, as a preacher, to which I'm pretty strongly committed), but also with the word painted, sculpted, sung, chanted—maybe even danced, filmed, performed—in short, offered in every way imaginable: literally imaginable.

Most churches, of course, have a full-time preacher, a part-time musician, and maybe a youth pastor, but why don't we all have a poet or a painter on our staff? A writer-in-residence? A filmmaker? A director? A choreographer? We've recently appointed an artist-in-residence, paying a very modest stipend to one of our key songwriters to support and encourage him in the artistic ministry he has been carrying out in our midst for years. Even that seems a small start on such a crucial task. But it is a beginning.

And this is not to say that we can ignore the need for other, often more immediately pressing "cups of cold water." There are and always will be hungry stomachs aching for food and hungry souls in need of deep spiritual care. To pursue or prioritize the cultivation of art in a church as a matter of mere aesthetics—rather than as an expression of the Christian theological and philosophical aesthetics of the sort that has so captured the imagination of Calvin Seerveld—is a thin pursuit indeed.

But the more "Seerveldian" sort? As Amos Wilder so richly observed in Theopoetic, "Before the message there must be the vision, before the sermon the hymn, before the prose the poem." And before we can offer that more literal cup of cold water to the thirsty wanderer, we've learned we need to have had our imaginations opened by a great piece of music, a simple sculpture, a striking mosaic, a challenging drawing, or a poet's ear for gospel. Before we can contemplate doing any ministry, we need to bear witness to things born of an imagination alternative to that which marks empire and exile.

We need the poet.

Cal Seerveld's books, including Bearing Fresh Olive Leaves and A Christian Critique of Art and Literature, are available from our friends at Hearts & Minds Books. 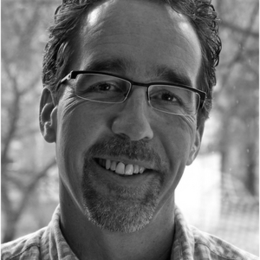 Jamie Howison is a priest of the Anglican Church of Canada, and the founding pastor of saint benedict's table in Winnipeg. In his 24 years of ordained ministry, he has worked in a variety of settings ranging from conventional parish work to chaplaincy in both institutional and university settings to his current ministry at the rather uncoventional saint ben's. Passionate about writing and jazz, he is currently working on a book dealing with the theological significance of John Coltrane.