The Quest for Community

Governments, everywhere, are running out of steam. A certain sense of bankruptcy has become palpable. It is not only financial, but also moral. Malaise is in the air. As a result, citizens are reverting to self-help, even in Canada. Suddenly, even nonbelievers are reminding others of their duties, as distinct from their rights. And where individuals cannot fend for themselves, self-help must again take place at the level of the community, the local community, as in the days of the pioneers.

The evidence is still building. Because Christians believe that social welfare is ultimately rooted in Christian principles and rules of conduct, expressed through Christian leadership, they are particularly conscious of the fact that, in recent memory, only Presidents Carter and Reagan of the United States, and Prime Minister Margaret Thatcher of Great Britain, have openly avowed Christian convictions. So strong was Mrs. Thatcher's last message to the Assembly of the Church of Scotland in Edinburgh, quoting liberally from the Book of Isaiah, that her address became known as "Margaret's Epistle to the Caledonians." Judging from their expressions, the church fathers ranged behind her were not pleased. Clearly the Prime Minister was confusing the civil with the ecclesiastical community. They may have been thinking of a 1954 essay by the Calvinist theologian Karl Barth on that very theme.

Canadians were fortunate to have had one Governor-General, George Vanier, who did not hide his Christian faith under a bushel, but for the rest, the pickings have been meagre. Prime Minister Mackenzie King's spiritualism was of a different kind. According to one of his spiritist companions, Lady Aberdeen, wife of yet another former Canadian Governor-General, King was much impressed by Adolf Hitler's "mystical" qualities. In a fundamental sense, he was a greater appeaser of Hitler than Neville Chamberlain. From the point of view of Christian leadership at the highest levels of public life, the Canadian record has not been outstanding. When financial and moral bankruptcy confront a nation, such leadership may very well be in demand.

Canadians and their governments have been staring a financial debacle in the face. In this they are not alone. Even though New Zealanders bit the public fiscal and monetary bullet almost ten years ago, they are still struggling with their deficits and with the painful consequences of the attempted remedies. In April of this year the Swedish national debt stood at 79 per cent of gross domestic product (GDP). Next year it is expected to exceed 100 per cent. In the United States, a bipartisan commission of senators has warned that "by the year 2010 the entire federal budget will be consumed by entitlements and by interest on the government debt."

While Americans are worried that the interest on the national debt will be eating up 14 per cent of government spending next year, Canadians are in a far worse pickle. Robert Crozier (a former federal public official) has prepared a set of graphs whose cumulative aspect has to be seen to be appreciated. The following are among the highlights. (Since they are derived from graphs, the figures are approximate.)

Those are trends of concern to all taxpayers. Of more immediate interest to our readers are the concomitant trends showing up in the domains of investment, production, and employment.

In the absence of savings and investment, production and employment soon suffer. In this, Canadians are not alone, but they are—at least not yet—as badly off as, for example, the people of Spain. There, according to the OECD, total unemployment reached around 24 per cent in 1993; in the same year, 42 per cent of the employable youth (people under 25 years of age) were out of work. In Finland and Italy, around 30 per cent of the youth were in the same boat.

But how well-protected are those who are still working? A single Canadian example suffices. In Ontario, the unfunded liability of the Workers' Compensation Board rose by nearly $1 million a day in the first six months of 1994. The total unfunded liability (to be footed from future taxes) has increased to $11.7 billion.

Little wonder that citizens in many industrial states are seriously looking to their own resources at subnational levels. Most significant is a tendency to begin to also clothe the message in a moral garb, in a form strongly reminiscent of the basic Christian message that directs each of us to the affairs of our neighbour.

In the past, Canadians in particular have seen their moral crusades in global terms. "Think globally, and act globally" was a good description of the Canadian ethos, best exemplified by a particular obsession with global peacekeeping and the transformation of "systems" on a global scale. For example, the Club of Rome, which thought and acted exclusively in global terms, relied heavily on Canadian support. Canadians were convinced that they were called (and equipped) to save the world from a litany of catastrophes.

More recently, the slogan became: "Think locally, but act globally." This was one of the favourite slogans of Canadian socialists. The slogan meant that socialist ideologies should be exported. They were supposed to work in Canada and could therefore be made to work elsewhere. Even Ontario elected a socialist government. In this crusade the multilateral agencies of the United Nations played a key role, except where Canadians saw exceptional opportunities in particular countries. One such opportunity (heavily underwritten by Canadian and Swedish taxpayers) was a disastrous socialist experiment by Prime Minister Nyerere of Tanzania. Regimes in Zimbabwe and Cuba, among others, also enjoyed substantial favours.

Now we have come full circle. The new watchword is quite different: "Think locally, and act locally." The most dramatic instance of this conversion is a recent decision by the Canadian disciples of the Club of Rome to turn away from concerns over disasters on a global scale, to the exploitation of local issues. The watchword is community.

Thus all manner of spokespersons are clamouring for "community." In the United States, unlike almost any other country, such invocations are issuing from the highest levels of government, namely, from President Clinton and Vice-President Gore. There, a typical source of influence is the writer, political scientist, and social commentator Amitai Etzioni, whose books include The Moral Dimension: Toward a New Economics (1988) and his latest, published in 1993, The Spirit of Community: Rights, Responsibilities, and the Communitarian Agenda.

From a Christian perspective, the table of contents of Etzioni's book is instructive. Chapter headings include "A New Moral, Social, Public Order" and "The Moral Voice." "The time was right to return to community and the moral order it harbored," he writes. "Bill Clinton made the spirit of community a theme of his 1992 campaign." Etzioni too talks of moral and social decay in the same breath as financial problems: "Beyond the usual ups and downs, we face an economy whose growth rate has been slowing down for decades and that has accumulated mountains of debt that it used largely to enhance consumption rather than investment....In this context it will be even more important for members of communities to reach out and help one another and those of less endowed communities."

Who then is my neighbour?

This is surely the crucial question. Etzioni seems to find communities almost everywhere, to the extent that in his hands the word begins to lose its meaning. He does, however, recognize that some would classify a labour union as a community, while others insist that there should be a distinct element of geographical proximity. Thus Ray Oldenburg, author of The Great Good Place, is quoted as asking "Can we really create a satisfactory community apart from geography?"

Indeed, evidence is accumulating from many directions that a workable spirit of community and the physical proximity of people seem to go together. In other words, a community where effective action seems possible has to be defined geographically. Karl Barth had even put the Christian community in a geographical setting when he wrote: "The Christian community is the commonality of the people in one place, region or country who are called apart and gathered together as 'Christians' by

reason of their knowledge of and belief in Jesus Christ." Granted that the Christian community has a certain exclusivity to it. Its members are, in the first place, members of the Body of Christ, which is not place-bound but universal. But for practical purposes (when Christian works are in order) the context is local and geographical.

The question for us is whether a civil community can be similarly based on a sense of exclusivity, other than the fact that the members of the community are found in tt defined place or region. Once the geographical limits of a community have been defined, however roughly, the notion of a civil community seems to require that everybody within such an area be regarded as a member. This accords well with the classic definition of democratic politics, which concerns itself with the wellbeing of the whole, not interest groups, as Sheldon S. Wolin so well explained.

In other words, we would argue that there is little room, within a specific civil community, for forms of sectarianism, including "multicultural" exclusivities. The Christian injunction is not to only "love those who are like thyself." Neighbour means those who are near.

Of even more direct interest to this readership is the notion of a community at work. In practice, most people work for organizations that are clearly bound to a particular place or region. Even cooperative networks among independent businesses are said to work best when the members in the networks are geographically close. But there is nevertheless a challenge. Are our workplaces in fact communities? Do people behave communally when they find themselves in one place?

Unfortunately, geographical proximity does not guarantee a spirit of community. It may, on occasion, reveal commonalities of interest, but is that enough? If Christians are incapable of transforming a workplace into a community where "love of neighbour" rules, is there any prospect that the people in a town or region can be transformed into a truly productive community? It is still the case that where business networks appear to function in a given area, they are typically restricted to businesses of a rather narrowly defined category. They only have narrow commonalities of interest.

Apparently, and despite their lengthy invocations, the Amitai Etzionis do not have the answer. The challenge remains. 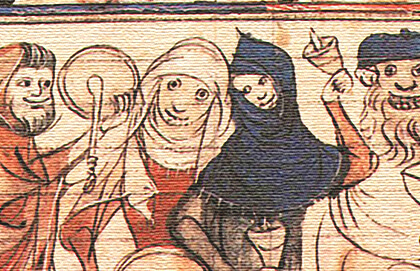 Holy disorder and hope for the world.

Canadians Expect More from Their Unions