The Quietest Painting in the Room

The way Christ's finger hangs there calling at Matthew, languorously, emphasizes the quietness in which the whole painting is framed.

I hate that line in Good Will Hunting when the counselor (Robin Williams) says to the genius janitor (Matt Damon):

So if I asked you about art, you'd probably give me the skinny on every art book ever written. Michelangelo, you know a lot about him. Life's work, political aspirations, him and the pope, sexual orientations, the whole works, right? But I'll bet you can't tell me what it smells like in the Sistine Chapel.

I hate it not because it seems to me a kind of bullying, like age condescending to youth and inexperience (though that's true), but because the Sistine Chapel doesn't have any particular smell. The Domus Aurea, sure: a bit mossy and dank, but cool, and with imaginary lavender. The Palatine smells vaguely of cats and burning wheat. Even Saint Peter's, just a stone's throw from Capella Sistina, has a scent: clay, and neoprene rope, and tourists. But the Sistine Chapel hasn't even an olfactory trace of incense, or oil paints, or sweating sixteenth century architects lying on their backs.

It may have had all those things when, in 1598, another painter named Michelangelo (Merisi da Caravaggio), from a town by whose name he was eventually known, made the first of his many visits there to see the great painting that his namesake had called forth from the abyss. We think of the Sistine ceiling as heavenly and eternal, but it helps to remember it was new once, shocking, and influential in a different sense than we mean it now.

And so, when, not 20 years later, Caravaggio unveiled The Calling of St. Matthew at San Luigi dei Francesi, the resonance would have been immediately clear, and unmistakable. The dramatic centre of the painting is the Christ's hand, pointing into the crowd, and it's the same hand, visually speaking, that hangs from the Sistine ceiling. Caravaggio had copied elements of Michelangelo's thought before—the former's Conversion of Saul in the chapel of Santa Maria del Popolo for example, features prominently the rear-end of a horse which never appears in the biblical account, but which was featured in Michelangelo's Vatican fresco of the same scene—but this copy of a gesture is so direct, and so central to both paintings, that the mimicry ought to give pause. What does it mean then, this limp wrist, the Creator's finger nearly touching Adam's, and Michelangelo Caravaggio's appropriation of Michelangelo Buonarotti's signature piece of painterly theology?

Matthew was a tax collector, and so the scene of his calling in Caravaggio is the interior of a rendering house. Though it appears to be mid-day (with a slant of light so steep, one would only actually see it in the early morning, or in northern climates) the room is all shadows, suggesting bribery, double-dealing, and the general crookedness of the Roman colonial taxation system.

The characters are dressed as renaissance Florentines, a choice which does the work of implying pre-conversion Matthew's complicity with the Roman domination system. As a Jew, he should have been working toward God's justice, which was to come to the world through his people; instead, he's helping an occupying force to exploit them.

The company's dress also suggests Caravaggio's own society's (and by extension, our own) participation in the scene of both exploitation and calling. He knew perfectly well that first-century Palestinians dressed differently than sixteenth-century Florentine-Romans, but re-dressed the characters as his neighbours (and benefactors) as way of implying the theological immediacy of the scene: not this happened, but this always happens. The addition of renaissance apparel argues not that Caravaggio was a poor historian—he put Mary and Joseph in period-typical peasant garb in Flight to Egypt, for example—but is instead a way of saying such duplicity is still afoot, and such callings are still salvific.

They're counting money at the table and so are surprised by the Christ's interruption. The shaft of sunlight I mentioned earlier is a pretty important piece of theology itself, and it cuts a diagonal in the frame. Though the gospels have Christ saying "I am the light of the world," it appears in this painting as though Caravaggio has Christ mixed up with John the Baptizer, about whom it is said, "He himself was not the light; he came only as a witness to the light," because here, Christ is in darkness and he points along the shaft of light coming from outside, from heaven, at the soon-to-be-converted disciple (John 8:12). Christ is definitely doing the pointing, Caravaggio seems to be saying, but God does the actual calling.

Some of the figures look like they'll jump from the table to take a stab at the intruder. These details shouldn't be overlooked. These are still the responses to Christ's interruptions. Matthew looks dumbfounded and incredulous. He's pointing to himself in a gesture that's part "Who? Me?" but mostly, "Who? That guy?"

Though the viewer might want to chalk up this response to timidity or to little faith on the part of O Ye, Matthew's confusion as he points between himself and the figure next to him may be warranted in this particular representation of the scene—because nothing seems to have been said.

Sometimes, Jesus says things. "Lazarus, come forth," for one (John 11:43). Even if you're dead asleep, you'll hear a voice calling at you with that directness. Or in the case of St. Peter's own actual conversion, he who was "Simon" gets a new name: a name no one has ever called him, but which has been his true name since eternity past. Again, there's little confusion there: "Hey you, I'm going to call you this," and the accompanying moment of recognition dawns.

But in Caravaggio's scene of Matthew's calling, the room is full of silence. The light of the world is standing in full darkness here, and the world stands not only mute, but seems to absorb all the sounds ever uttered.

It actually would have been full of wooden stools sliding back as toughs rose to meet the intruder: shouts of surprise, the chink of coins, the slip of daggers from sheaths, and the usual barbaric bleating men make when they feel threatened.

But not here. This is the quietest painting I've ever seen. Bowls of fruit make more noise than this crew.

If Matthew's gesture is somewhere between wavering and recognition, Christ's is listless and recognizable. But the gesture isn't new; it's an echo. How many dorm rooms are outfitted with a close-up of this moment: God's creation of Adam via the listless finger of Michelangelo's version from the Sistine Ceiling?

That's a smart piece of theology itself, of course. God the Father reaches down out of a cloud of angels to give Adam the spark of life. In the biblical account, the Creator "breathes the breath of life" into his creation, but Michelangelo chooses to emphasize how we are God's handiwork. All the rest of creation is spoken into existence, but the Adam is formed from "the dust (or clay) of the ground," meaning God got his hands dirty. We were fashioned not with words, like the great poem of the world, but from extant elements, in a way that recalls painters or—since it was Michelangelo's true calling—sculptors.

If Adam only looks half-interested in receiving the divine spark, if his gaze looks out, but not quite up, not quite at the God who made him, that's because he simply can't. Though God "walked in the cool of the garden" with him, in this exchange, Adam is as blind to the Creator's presence as any of us, but he lifts his hand out into the cloud, into the darkness, hoping to be touched—which is of course, the best any of us can do either.

When Caravaggio lifts the gesture whole-cloth—and make no mistake: he stole the rendering from a chapel that sits not a mile away, and that everyone in town had seen—he transposes the figure, again switching the roles, giving Adam's limp gesture to Christ, rather than God's active one.

Is the switch an argument about Christ's divinity on the part of the painter, who often portrayed holy subjects as commoners? I don't think so. The way Christ's finger hangs there calling at Matthew, languorously, emphasizes the quietness in which the whole painting is framed. Christ hasn't walked in and pointed at the tax collector like Uncle Sam in a war-recruiting poster. Maybe we could say it this way: a calling isn't usually a shouting. Still and small, the voice goes.

Matthew is about to get created in the exchange just the way Adam was, is about to come alive to himself and to history in a way no one, least of all this poor, pantalooned sop, had imagined a few coins ago. But here it is not God calling him (except in the sense that he is, along that slant of characteristic light) but our Second Adam, and his calling is as subtle as a scent. 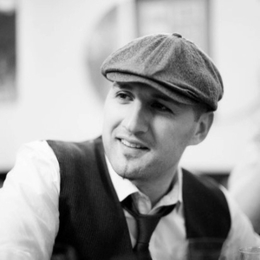 Mischa Willett is a poet and essayist whose work has recently appeared in Books and Culture, The Curator, Rio Grande Review, Basalt, and Grain Magazine. Currently, he is serving as Scholar-in-Residence at the University of Tuebingen in Baden-Wurttemberg, where he lives with his wife on a sleepy bend in the Neckar River. He is also host of the popular podcast "Poems for the People."