The root of our financial crisis

A new view of the "American Dream" was being created, including a "right" to unlimited consumption, achieved without personal responsibility. But now this unrealistic, ephemeral dream has become a nightmare, exported globally.

"Surely many houses shall be desolate, large and beautiful houses, without inhabitant.â€¦ Man is humbled, and each one is brought low, and the eyes of the haughty are brought low."
—Isaiah 5:9,15

The economist J.K. Galbraith once aptly stated that it was easier to explain the 1929 stock market crash than to explain the ten years of depression that followed it. Here I will take the easier road in attempting to explain our current financial crisis. While I focus on the economy of the U.S.A., similar events have occurred in other nations around the globe.

What caused the recent stock market crash and recession? In the U.S.A., the answer is simple—voracious consumption financed by excessive consumer debt. Indeed, the modern consumer is reminiscent of British landowners at the time of the industrial revolution, whose propensity to consume far exceeded their income.

Of course, today's excesses relied upon financial institutions as enablers. These enablers provided the fraudulent writing of subprime and other mortgages as well as consumer consumption loans (credit cards)—the latter at usurious interest rates.

Recently, the process of pooling mortgages, credit card balances, and other asset-backed loans has been the target of derision. Previous to pooling, which began in the 1970s, the bank or savings and loan that underwrote the mortgage would hold onto it for the life of the mortgage, and the consumer would make payments directly to that bank. Since the 1970s, this process of pooling these loans has worked effectively. Pooling occurs when a buyer like Fannie Mae (the Federal National Mortgage Association) purchases a thousand conventional mortgages (mortgages issued to high-credit-worthy individuals) from mortgage originators and creates a mortgage-backed security. This security is then divided into a number of different securities called "tranches."

One can think of tranches as different layers in a layer cake. Each layer is designed to meet the needs or tastes of a different class of investors. The top layer or tranche is usually the least risky, and the one that has the highest priority of receiving payment. This layer is typically sold to an insurance company or an investor that requires low risk. The next layer might be sold to a pension fund. The lowest layer, the most risky layer and the one with least priority, might be sold to a hedge fund or any investor willing to take high risk.

In the case of mortgages, the layers are paid each month from the principal and interest payments made by the home owner, so that a portion of one's monthly payment might be going to an insurance company in the U.S.A., while another portion might be going to a bank in China. As time passed, this same process of pooling was used for credit cards, auto loans, and business loans. Thus, the monthly payment an American consumer makes on their credit card is eventually divided and distributed to different investors around the globe.

This process worked well for all parties and provided liquidity to the financial system. What happened to change it? In the U.S.A., a conforming borrower—that is, a borrower who conforms to the high standards of Fannie Mae—has two basic sets of characteristics: an excellent credit history and a high verifiable monthly income relative to the monthly mortgage payment. A potential borrower who may be self-employed and have an "A" rated credit history, but may be unable to provide adequate documentation as to their monthly income, is classed as an Alt-A borrower. Borrowers with poor credit histories—"B" to "D" rated—are classified as subprime borrowers. Their poor credit histories could be due to poor debt management, defaulting in the past, or factors such as job loss or a medical crisis.

Originally, any loans made to these individuals were pooled by private poolers, as opposed to agency poolers such as Fannie Mae. Indeed, Fannie Mae initially resisted buying Alt-A and subprime mortgages. However, in recent years, Fannie Mae, pressured by the U.S. Congress, began buying these mortgages and pooling them.

The crux of the current problem began here. It is important to remember that mortgage originators do not have to live with the mortgages they write; they simply sell them to agency or private poolers. Subprime mortgages were given to individuals with seriously impaired credit history, and at high monthly payment-to-income ratios. In many cases, these facts were hidden, and, to put it bluntly, just plain lied about. The most grievous fraud was perpetrated when the originators overtly lied about a consumer's monthly income. Some consumers knew they were lies; others perhaps had suspicions but trusted the underwriters' judgment.

These loans were made at the speed of light; rating agencies in some cases were sometimes fooled, sometimes overwhelmed, and sometimes may even have turned a blind eye. These lies, of course, could be covered up for a short period by the use of low initial interest rates and interest-only loans.

Alas, the "toxic asset" germ entered the system. The availability of subprime mortgages had the added impact of increasing the demand for housing, which in turn raised housing prices, thus creating the housing price bubble. As existing home owners' housing values rose, they felt wealthier, and consequently took out more loans, including second mortgages based on the inflated values of their existing homes. The money from these loans allowed them to consume more—all of this based on the leverage created by the "toxic asset" germ released into the system.

This bubble burst when the interest-only period ended and low "teaser" interest rates expired, after which interest rates on these mortgages rose, causing the mortgage holders to default. This created a domino effect that traversed the globe, since investors throughout the world held these assets.

Moreover, struggling to make these inordinate mortgage payments meant that American consumers could not afford to buy other goods and services. This latter problem was exacerbated by the sudden jump in oil and gasoline (petrol) prices. Numerous American retailers lost sales and marginal retailers went into bankruptcy. Unemployment began to rise. Stock prices tumbled.

Tumbling stock prices meant that the value of the debt held by large banks and financial institutions around the world exceeded the value of their equity. Thus, the banks' loan-making process froze; they simply did not have the equity to support making new loans. In addition, banks that were able make loans to other, more troubled banks, refused to do so, fearing that those more troubled banks were about to fail. Moreover, tumbling stock prices wreaked havoc on retirement portfolios, and also had the effect of revealing even more devastating financial scams such as the Madoff "Ponzi" scheme.

The question arises: Why didn't anyone recognize this folly? The answer, it seems, is that many did. Some risk managers at many commercial and investment banks understood what was happening, but their warnings were not heeded because of the inordinate sales and profits that were being made. Others may have been fooled by the underlying fraud. Some, recognizing the potential problem, purchased credit default swaps from insurance companies such as AIG. The purchase of a credit default swap is simply the making of a bet that a mortgage pool or a corporation will default. If it does, you win the bet and AIG must pay you. Of course, AIG took so many of these bets that they could not pay.

In addition, rating agencies that gave these mortgage pools high ratings have a potential conflict of interest, since they are paid by the private firms that create the mortgage pools. Again, some may have recognized the problem, while others may have been fooled. Governments and government regulatory agencies seemed to have encouraged, ignored, or missed the problem.

But the fundamental root of the problem in the United States is that a new view of the "American Dream" was being created. Historically understood, the American Dream was that personal prosperity could become a reality through hard work, discipline, and integrity, in a free society. The new American Dream has become that of a "right" to unlimited consumption, achieved without personal responsibility. But now this unrealistic, ephemeral dream has become a nightmare, exported globally.

True, all the watchmen were asleep, or conveniently ignored the problem. Fraud, neglect, hubris, arrogance, idiocy and foolishness are always exposed when markets crash—as Cassius says in William Shakespeare's Julius Caesar, "The fault, dear Brutus, is not in our stars, but in ourselves!" Indeed, how the eyes of the haughty are brought low. 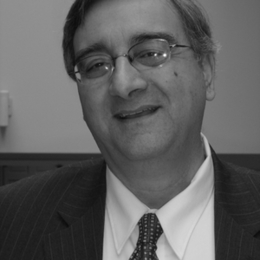 Dr. Philip Fanara, Jr., holds the Morgan Stanley Foundation Professorship as Full Professor of Finance in the Department of Finance, Insurance, and International Business at the Howard University School of Business in Washington, D.C. He currently teaches Investment Banking, Investment and Portfolio Analysis, Financial Engineering, and Corporate Finance. Formerly, he held positions as Associate Dean, and Chairperson of the Department of Finance, Insurance and International Business. Previous to his joining the faculty of Howard University, he taught at the University of Maryland, and Indiana University.

The Equality Campaign Muddles On in Ontario