Your creatures—what a fantastic number, Lord,
and You crafted all of them with such (deep) wisdom:
the earth teems with your handiwork!

Look at the far expansive reaches of the seas!
Why there is no end to the swarming number of tiny mollouscous and monstrous animals swimming there;
where the ships ply their trade,
there too is the enormous leviathan You moulded for playful frolic in the deeps.

All creatures wait expectantly for You to give them their meal at the proper time—whatever You give them, they lick it up!
When your hand is generous, they stuff themselves full—it is so good; when your face does not appear, they crisscross in dumb panic.
If You take their breath away, they die off and turn back into (their) dust.
When you breathe out your breath, creatures are created;
and You replenish afresh the face of the earth.

May the glory of the Lord Yahweh last for ever and ever and ever!
Let the Lord God Yahweh enjoy what he has made—
He who need but look at the earth, and it shivers,
who need but touch the mountains, and they are wreathed in volcanic smoke.

I am going to sing to the Lord God Yahweh as long as I live!
I am going to serenade my God with music as long as I am there!
May my poetry make him happy
—I, at least, am going to be happy, enjoy it with him, the Covenanting One!
—Would (to God) sinful men were gone from earth!
Could violent, godless men but become extinct!—
Praise! Let all of me praise the Lord! Hallelujah!

Go to the zoo

About the only way twentieth century urban people can get help to understand Psalm 104 is to go to the zoo. Perhaps out in the scrublands of New York, Tennessee, or British Columbia a person can get close to squirrels and rabbits, fish, raccoons, and a few deer, albeit with intent to kill.

But near Chicago, where I used to come from, as the blocks of city cement underneath apartment buildings inch out daily into the suburbs like one huge glacier, turning green spots of earth into a man made megalopolis stretching from Gary, Indiana, all the way up to Milwaukee, Wisconsin, about the only land animals you see, except for watchdogs, are a stray opossum or a dead skunk hit by a car on the highway. Modern man is far away from the crabs and whales, roaming buffalo, large jungle snakes, and mountain goats that Psalm 104 calls to mind.

Earthquakes, too, have been demythologized into so many Richter points on a seismograph. Earthquakes are the result of shifting rock pressures in vaults deep under the ground, not at all the earth trembling at a look from the Lord.

Clouds of fiery smoke spit out by Sicilian and southern Italian mountains have also been neatly analyzed by scientists; besides, the clouds produced by man-made bombs out-mushroom anything God's old Vesuvius ever did.

Can we hear the good news of Psalm 104 today? Who of us ever becomes agog at wild animals and sea creatures, except as tasty prime cuts on the dinner plate, or as specimens to be cut to pieces in a biology lab?

When you go with the eyes of a child to the zoo there is a chance at least to become fascinated by the fantastic variety of improbable creatures: the luminescent colours of tropical birds; the amazing mouth of a hippopotamus eating bread; the unblinking night stare of a cheetah, bewhiskered, six feet from your face; the shameless acts of ludicrous monkeys on a hill of stone.

And most revealing are the moments just before the keeper brings the food for the day. Then lions pad swiftly back and forth in the cage with an expectancy that belies their dull existence; polar bears rear and dance on their hind legs to catch a mackerel thrown to their maw; and an old fat walrus grunts and honks and flaps his hundreds of pounds of arctic fat out of the frigid water onto a slab to receive his portion, pop eyed, meekly from the hand of man. It is all so exciting, naturally wholesome, joyfully right to the eye of a child.

The point is this: we civilized Christians have got to catch the living vision of Psalm 104 again. We believers have to hear this Word of God reform our perception, let it be born again as it were, to wide eyed, childlike astonishment at the marvelous, mystifying handiwork of the Lord all around us if we are really serious about responding to his revelation aright.

To see a World in a Grain of Sand,
And a Heaven in a Wild Flower,

but so much is so: the secular logicist who x rays and reduces plants and animals to so many catalogued specimens, who turns the miraculous birth of a baby into only a statistic, who thinks an "act of God" is the kind of catastrophe insurance companies do not pay off on—such a scientistic person ruthlessly denatures the world and robs it of its glory. And Christians who have lost the overwhelming biblical sense of creation because they are so "heavenly minded," citified, or just plainly insensitive to the Old Testament soon become warped and unfaithful stewards.

Any human activity that lacks the grounding perspective of Psalm 104 will inevitably become mis focused, maimed, bizarre or idolatrous, a bastard form of culture, a far cry from the way it was in the beginning when Adam gave the animals their names and composed the first epithalamium for his bride Eve (Genesis 2:23-24).

It would be good to get that straight first: the world we inhabit is more than humans and a subhuman Nature; this world is the dazzling theatre, workshop, playground of our Father in heaven, peopled by whatever his creative Word sustains.

That means we must be humble enough to see the grass, dirt, snow, rivers and deserts, rain and sunshine, as the wall to wall carpeting of the Majestic One. America—so beautiful for spacious skies and amber waves of grain—is declaring, in a dumb sort of way, the glory of the Lord, without the help of man. And the animals, which we eat and humanize into pets, all by themselves delighted God no end before we were even on the face of the earth, says Job (38-39).

Psalm 104 means what it says: all creatures wait expectantly for the Lord Yahweh to give them their meal at the proper time. Owls and spiders and wolves testify, witness to the extraordinary, provident care of the Almighty One who judges, loves, agonizes, joys over sparrows and lilies as well as the sons of men.

This biblical insight is critical because we western Christians, impregnated by hundreds of years of influential humanism, are also wont to think more highly of ourselves and our human technological achievements than we ought to think. It puts us in our place to realize every creature is made to praise God. All things are transparent manifestations of his power and wisdom.

It is the very nature of creation that the whole world is like a burning bush even though we walk around all the time with our shoes on. This is why the Old Testament singers sang about loving the law of God (Psalm 119), taking delight in the provident order that graciously surrounds, structures and buoys up every living thing, even shining through the lowly stones.

Reprinted by permission of the author. This piece is an excerpt from Rainbows for the Fallen World: Aesthetic Life and Artistic Task (Toronto: Tuppence Press, 1980).

The Flash of a Fish Knife 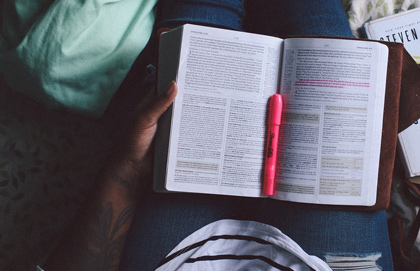 Reading the Bible's not easy. You must do it believing expectantly, on your knees. 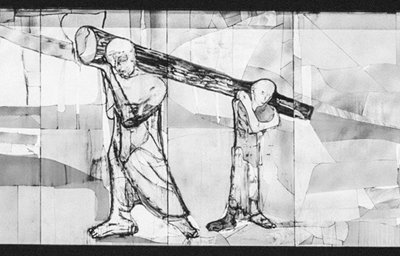 The Commons: Remembrance That Limps

Remembering and forgiving with our crooked human hearts.