There was grace in my mother's promotion, for she had learned to breathe meaning and significance well before her last breath.

My mother died on her 84th birthday. It was quite a celebration.

We don't talk much about ending well. North Americans approach death as if it is optional. It's not. It is the defining reality that frames our lives and places them in a larger context. Through years of faithful discipleship to Jesus, my mom learned to live an undying life. She ended well.

They will see his face, and his name will be on their foreheads. And night will be no more. They will need no light of lamp or sun, for the Lord God will be their light, and they will reign forever and ever. (Revelations 22:4-5)

Mom was a fighter. Thirty-eight years on the Korean mission field had taken its toil on her body: five spinal fusions, Hepatitis-C, knee and shoulder replacements and finally liver cancer. We often noted that it was a good thing that she was married to a doctor. Her husband Dave was the love of her life to the end. It was a storybook romance that had begun at age sixteen at a Florida summer church camp. Perhaps her greatest loss and personal struggle was losing him to Alzheimer's. "I'm afraid I will sin when I get to heaven," she said toward the end. "I don't know if I will run to Dave or Jesus first."

Never the victim of life's circumstances, she embraced each day with a joy and hope that touched all who were around her. She thought carefully about her ending. She wrote a will that specifically embraced all her grandchildren. Her ambition was to leave a spiritual legacy in the coming generations.

No one knows this more than Eric. Eric is my nephew who has had his share of youthful struggles and wayward friends. Last summer he came to live with his grandmother. Mom cared deeply about young people, and she particularly loved Eric. Age gave her permission to be blunt with him, but her words were always wrapped in tears of unconditional love. Somehow, by God's grace, her life and faith touched Eric. When she relapsed after treatment for her cancer, Eric slept on the floor of her room at night. His words at her funeral spoke volumes about the importance of having grandparents in one's life.

Mom was a percussionist. Not only did she play the kettledrums, she was also a renowned bones player. First made of cow's ribs, today bones are folk percussive instruments made from wood. Mom learned to play them as a girl from an Appalachian musician in western North Carolina. The bones became mom's signature instrument. Ever the sanguine, she would bring them out and start clicking a rhythm in the middle of restaurants, museums, schools and churches, and the appreciative crowds would be spellbound.

She knew her days were numbered; months shortened to weeks and days. But she was determined to join Bone Fest XIII in Louisville, Kentucky—a gathering of the best bone players in the nation. Her granddaughter, Ivy, accompanied her. Two concerts and one workshop later, she gave as if there was no tomorrow—staying up past 1:00 a.m. with musicians half her age. She sucked the marrow out of life. Two weeks later she was gone. "Our Mary," they would later affectionately remember her.

In our modern world, families gather for weddings and funerals. The Seel family gathered instead for the time of passing. Grandchildren from San Francisco to New York gathered at her bedside in the Palliative Care and Comfort Center at the University of Alabama Birmingham. On her door hung a sign: "A place where time stands still, memories linger, and friends gather." We read scripture, sang hymns, and sat quietly basking in the significance of family set against this great drama of life and death. Her faith and confidence in the Lord was a palpable apologetic to those around her. But it wasn't syrupy or sentimental. After a friend read a passage about heavenly mansions, mom was staring intently out the window. "Are you looking for your future home?" he asked piously. "No," she said, grounded in the present. "I'm watching those cranes move as they build that building over there."

Toward the end, we had a decision to make. We'd planned a big birthday party for mom. Thirty or forty invitations had already gone out. As the end approached and her liver shut down, she was increasingly jaundiced, and was in her final stages. What would mom want? A party, we decided. So everyone came to the Palliative Care Center, where we cut cake and sang "Happy Birthday." Two by two, her closest friends went into her room and said their "good-byes." Such a sweet blending of joy and sadness, celebration and impending loss. It was a birthday, a graduation day, a reuniting of lost lovers, an anticipated embrace of a hand-scarred Saviour, all wrapped into one poignant moment.

Around her bed the next morning, her family gathered. It was Monday morning, her 84th birthday. There is no more profound experience in human life than participating in the passing of a life from this world to the next. It defines transcendent. Mom ended well. For years she had lived in the shadow of my father's greatness. Not now. In her passing she marked the lives of her family in ways that I could not have imagined.

Hers was a story set in a larger context. There alone did she find meaning and significance. It's true of all stories. The meaning is largely a matter of what comes later. There was no ending here—merely the turning of a page. She is more alive than we will ever know. There was grace in her promotion, for she had learned to live the undying life well before her last breath. Her example calls us to do the same. 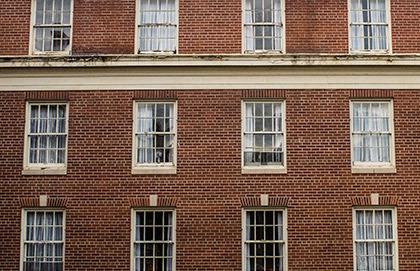 Advice to my former freshman self

A few things that I think you, my eighteen-year-old self, can stand to learn from me, your twenty-two-year-old self.

Spinning and Being Spun

Have I done the work I was made for?