The green movement, as commonly understood, embodies one idea I believe Christians should heartily endorse, and one I believe we should equally heartily reject.

Without a doubt, "green" has become a major trend in recent years. It is hard to pick up a magazine or newspaper without seeing one or more articles on global climate change, green living, or sustainability. North American Christians have seemingly been of two minds on the topic, which I will caricature broadly. One group, which we might call traditional evangelicals, believe global climate change to be another leftist excuse for world government, and tend to be dismissive of the green movement. The other group, associated with younger and "emergent" congregations, have grabbed hold of environmental stewardship as one of many important causes that the traditional church has overlooked in its singular quest to save souls.

My view is that both camps are partly right, and both partly wrong. I am going to attempt to sketch a picture of an appropriate, Christian response to the issue of environmental stewardship, recognizing that this view will seem skewed to perhaps a majority of readers. I am not going to address the issue of global climate change per se, because I am not an expert, and because even experts disagree.

The green movement, as commonly understood, embodies one idea I believe Christians should heartily endorse, and one I believe we should equally heartily reject.

The idea under which we should join hands with environmentalists everywhere is the notion that we have a responsibility to care for the planet we have been given, and the accompanying recognition that, at least since the Industrial Revolution, we have not done a very good job of this. Creation care, as it is sometimes called, is a duty given to us in Genesis, when we were called, through our first parents, to cultivate and subdue the earth. In the last few centuries, though, Western society seems to have viewed "subdue" as a license to exploit and damage our terrestrial home. In my view, this exploitation has been a grievous sin, one in which the institutional church is implicated, and one for which we should be profoundly repentant. Repentance, I should point out, involves not only feeling sorry, but changing behaviors to pursue a different course.

The writer Wendell Berry has devoted much of his fiction and nonfiction work to this problem, the non-sustainabilty of industrialized agriculture, and I think that he gets a lot of things right. We should rethink the scale and technique of not just agriculture, but manufacturing, shipping, and the gigantism of modern economics as we seek to live our lives in ways better suited to preserving a heritage for those who will follow. Christians should be leaders in this movement, based on our understanding of the early chapters of Genesis. To shrug our way to giant discount stores in gas-guzzling SUVs to buy plastic, clamshell packages of cheap products made in China as "just the way things are" is a dangerous acquiescence in cultural misguidedness.

But there is a side to the green movement I believe to be mistaken, and one that I think Christians should actively oppose, even as we support more thoughtful, sustainable ways of life. That is the Malthusian view that we are exhausting the Earth's supply of resources and rushing headlong into a world of mass starvation. This is a difficult subject, and merits a more thorough analysis than can be given here, but I will put my argument forward briefly: our God is a god of abundance. He provides abundantly for all our needs for fresh air, fresh water, nutritious foods, and natural resources from which to fashion our lives.

This is not to say that drought does not sometimes result in catastrophic crop failure, or that human agency does not sometimes result in famine. Both these things happen, sometimes at a truly tragic scale. But in the main, sound husbandry will produce crops that yield "thirty, sixty, even a hundredfold" return on our investment. The message of global scarcity is a modern invention, and is not supported by what the Bible teaches. The problem we face is not so much a lack of resources as it is a lack of wisdom in their proper use. We are not running out of fresh water: the oceans are evaporating at the same rate they always have. We may hoard, waste, misuse, or pollute fresh water to our detriment, but we are not going to run out of it. Malthus was wrong, and more recently, Paul Erlich (of The Population Bomb fame) was wrong as well. I charge both authors with a lack of faith. Christians should embrace our role as careful and thoughtful stewards of this world while rejecting the fear-mongering that leads to unwise choices.

One might then ask how ought a thoughtful Christian to lead what might be called a life of fearless sustainability, or, put another way, to be green without being yellow? I think we should start by examining our own choices, with respect to use of fossil fuels, plastics, imported goods, long-distance shipping, and transportation. We can all be more thoughtful about the degree to which we participate in the degradation of the earth, whether by a Montana copper mine or a new factory in China. At the same time, I believe we need to spread a hopeful message of God's loving provision for our needs; that his eye truly is on the sparrow, and that as long as we are wise stewards, neither the sparrow nor the humans he cares infinitely more about will starve. These two ideas, I hope you see, are complementary, not contradictory, and I think they point a way forward for thoughtful Christians. 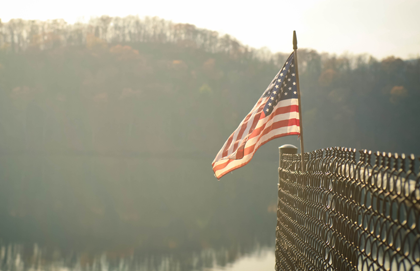 Ensuring faith is lived out by the American people, not consigned to presidential theocracy.