Jacobsen's insight into the degree to which the suburbanization of North America has been bad for church and community life is stunning—even more so if you had not previously considered the possibility. 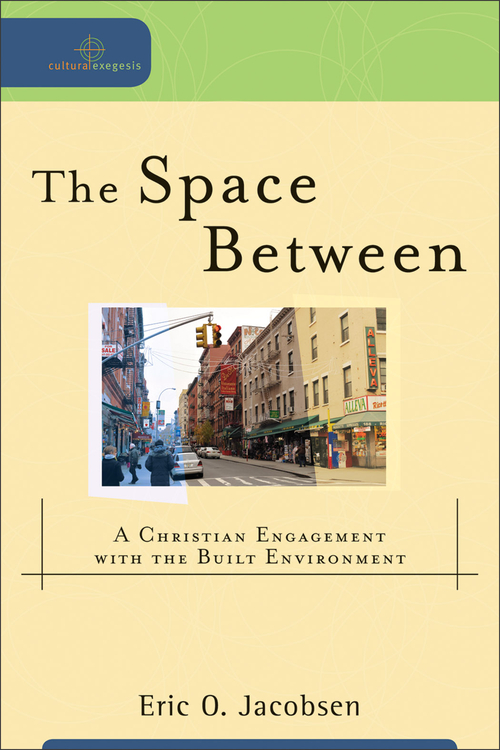 The Space Between: A Christian Engagement with the Built Environment by Eric O. Jacobsen. Baker Academic, 2012. 304pp.

Eric Jacobsen's 2003 book Sidewalks in the Kingdom: New Urbanism and the Christian Faith greeted me like a cool spring on a long hike through the desert. Here was a book—by a pastor, no less—that sought to explore urban design in a plainly Christian context, without my having to translate what was being said into theological terms. For a believer passionately convinced that the built environment mattered to both man and God, the book was a revelation. Cheerfully anecdotal and mercifully free of academic prose, it was also a pleasure to read.

But wait, it gets better. Drawing from the opportunities and challenges that followed the publication of Sidewalks in the Kingdom, Jacobsen continued to press into the theology of the built environment as a doctoral student, speaker, writer, and pastor. In the near decade since that first book, Jacobsen has refined and expanded his views on urban design, resulting in his new volume, The Space Between. For this reviewer, it's Christmas all over again.

One might characterize Jacobsen's new work as an expansion of Sidewalks in the Kingdom, but that hardly does justice to the breadth of the current volume. The Space Between uses the public realm (defined by Jacobsen as the space literally between buildings that encompasses at various times porches, yards, walks, and streets) as a point of departure for a thoughtful reconsideration of North American Christianity, and the degree to which it has been shaped by the built environment.

A casual observer might be forgiven for wondering what the development of North American Christianity has to do with urban design. Jacobsen's accomplishment is to tease out the degree to which thinking about how we design (or not) our cities has affected how we carry out the work of the church. This extends beyond the walls of the church itself—and the parking lot—to include thoughtful reconsideration of neighbourhoods, community, the family, home, church, and civic life: in short, virtually all of life. I don't mean to say that Jacobsen blames every failure of the church or the family on bad urban design—far from it—but his insight into the degree to which the suburbanization of North America has been bad for church and community life is stunning—even more so if you had not previously considered the possibility.

But rather than seizing on the easy target of suburbanization and hammering on it for nine chapters, The Space Between takes surprising turns: into the structure of families, for instance, and the delicate politics of neighbourhoods, as well as the more obvious ways that churches have too easily adapted the urban forms suggested by rapid suburbanization. Jacobsen contrasts what he calls the "embedded" church, found (prior to World War II) shoulder to shoulder with other urban buildings in central cities, with the "insular" church, found crouching behind a parking lot in the suburbs. The theological insights he is able to draw from these two prototypes are profound, and, for many a suburban parishioner, I would think unsettling.

Along with thoughtful critique, Jacobsen offers a variety of helpful ideas for the church to re-engage with the city in the space between. He praises, for example, the parish model that is still the policy (if not always the practice) of Roman Catholicism. The simple logic of the parish is that the church should be within walking distance of the home, which has any number of salutary effects, not the least of which is the possibility of walking to church, of interacting with neighbours on the way to church, and of gaining the kind of knowledge of a place that can only be gained on foot.

Another practice Jacobsen commends is the intentional pursuit of beauty in church design. While this may seem obvious, beauty is unfashionable in many quarters, and is often left off the brief for many a new church facility while "good sound system" or "comfortable seating" is left on. Calling the church to be more intentional in its pursuit of beauty is a welcome dose of good sense.

Organized in three parts, The Space Between first orients the reader in the theological context of the built environment, addressing basic questions of human identity and our location in space and time. The second section explores how the built world affects family, church, and political life in surprising ways. In the third part, Jacobsen provides practical wisdom for thoughtful disciples of Jesus to engage with the built environment, and he concludes the book, appropriately, with an inquiry into the shalom that all believers should be seeking for the city as well as their own lives and loved ones. A number of helpful illustrations by Lee Hardy help bring to life the ideas discussed throughout the book.

If I have one quibble with the book, it is when the author takes detours from his detours to unpack some methodological point that may be of interest to scholars, a category that excludes this reviewer. But these digressions are few and not long, and do little to detract from the overall excellence of the work.

As I work in architecture and urban design, it may seem as though I am the target audience for this book. And while it's true that I took to it like catnip, I think the real target audience is anyone in a position of church leadership, either clerical or lay leaders (and those who would someday become either). The themes that Jacobsen touches on are of course important to design professionals, but even more important, I think, to those entrusted with stewardship of the church in our time. Reading The Space Between could be, for church leaders, a source of godly discomfort along the lines of books like Unchristian or You Lost Me, because conventional wisdom about how we do church, and especially how we build churches, is prophetically called into question.

It is a fact that fast-growing churches in North America for the past few decades have been mostly suburban, mostly large, and mostly located on huge parcels of land surrounded by even huger parking lots. Reading The Space Between questions all these practices, from a theological as well as a practical point of view. This is a book that was needed fifty years ago or more, but as Anthony Hopkins says in The Mask of Zorro, "When the pupil is ready, the teacher will come." Perhaps in this day, in our time, the pupil, the church, is ready to hear what the teacher, Eric Jacobsen, has to say. His is a prophetic voice that needs to be heard.

So what's wrong with pragmatism in architecture? Plenty, as it turns out.