American President Barack Obama hosted Harvard professor Henry Louis Gates and Cambridge, Mass. police officer James Crowley at the White House yesterday to discuss the debacle surrounding Officer Crowley's arrest of Professor Gates over a glass of beer. This 'beer summit' intrigued Comment, but we were surprised to discover this morning that the participants came close to following what we thought were potentially controversial suggestions from Will Hinton: Pres. Obama drank Bud Light, Prof. Gates enjoyed a Jamaican Red Stripe, and Sgt. Crowley a Belgian-style witbier from the Blue Moon Brewing Co.

Never shy when it comes to beer suggestions, and aware that the right brew could have been yet another expression of Canadian soft power if it contributed to peacekeeping in the White House, our Cardus colleague Rob Joustra suggests that a better choice might have been Steamwhistle all round, "because the last time three guys got fired up like this the result was a great crisp summer beer."

Comment contributor Brian Dijkema also thought that some Canadian peacebuilding would have been a good idea, but had difficulty coming up with an appropriate beer. He writes:

"I suppose some peacebuilding activists might have suggested Molson Canadian as an assertion of soft power, but, given that Molson's merged with Coors, it wouldn't really be a Canadian beer, the name and patriotic commercials notwithstanding. I was going to recommend Lakeport from Cardus' home city, but again, Canadian beer sovereignty has been sold out to another tasteless, faceless company; some Belgian and American involvement there, I think. My last gasp was to go with Sleeman's, but they're owned by a Japanese company. I'm a Canadian beer nationalist and therefore have to go with something certifiably and purely Canadian. Go with Bytown Brown (straight from Canada's federal capital) for serious complexity and weight, or, if big brands are to be the order of the day, Moosehead."

. . . And, finally, Comment associate editor Alissa Wilkinson has spent the week in Santa Fe, New Mexico, attending IMAGE Magazine's Glen Workshop, along with at least a half dozen other Comment writers and a host of thinkers, writers, and artists. The landscape is stunning, the food is surprisingly good, the lectures and presentations have been top-notch, and attendance at next year's Glen is greatly encouraged! 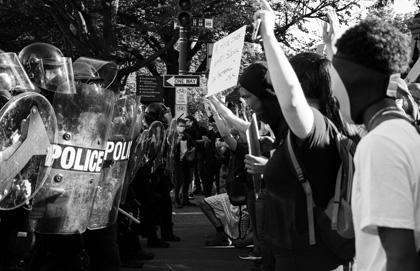 Justice and Race: What We Can and Cannot Change

The Future of Federalism