What have future generations ever done for me?

Vast segments of Western culture no longer believe that life has an eternal aspect, and without that, there is no foundation for caring about future generations.

Youth is angst-ridden, and the problem, apparently, is their parents' generation—this is breaking news for the young who are experiencing it (and a lot of other anxiety-inducing stuff) for the first time. They are worried about employment, leading meaningful lives with purpose, and taking on the responsibilities of marriage, parenthood, home-ownership, the economy, the future of the planet and, for some, the health and welfare of their immortal souls.

For those of us somewhat longer in the tooth—assuming we still have "tooth"—this revelation produces one of those grand yawns associated with the ennui of the entitled. Life, my fellow grey-haired, balding, sagging peers like to note, has ever been thus. We rebelled against the uptight values of our parents. We grew our hair, declared a barely controlled burn on the values and institutions that had sustained previous generations, liberated women from the shackles of reproductive slavery, redefined marriage, loved the one we were with, and if it felt good, we did it. And if you think jobs are scarce now because there are too many Baby Boomers continuing to suckle on the economy, you should have tried finding a job when we were all young and entering the workforce en masse in the 1970s. That, friends, was hard—even harder if you refused to move to where the work was and demanded instead that it be delivered to your door.

So, no news here? Everyone move along please, nothing to see now, folks?

It is true that certain anxieties connected with the launch of an adult life are unavoidable and, really, who ever said the world owes you a living? Jobs exist where they are (Saskatchewan, by the way, is recruiting from Ireland). If they don't exist where you are, move. This concept should not be difficult for North Americans, vast millions of whom are only one or two generations removed from those who didn't just move cross-state or to another province but across continents and cultures and languages in order to find "a better life" for themselves and their children. Young people should know this if for no other reason than that they understand that if they want to meet potential mates they won't do so unless they go to places where the opposite sex can be found in numbers sufficient to create a reasonable chance of success. If you want to sit at home playing World of Warcraft or Settlers of Catan with your geeky buddies on the weekends, you will not meet women; you will not marry; you will not have children; you will, in fact, be testament only to Darwinian theory as a Loser. Pretty much the same goes for finding work.

Yet young people today do face some matters that are unique. Whereas my generation had to worry only about trifling matters such as the remorseless advance of Communism and imminent nuclear Armageddon, today's youth has to live with the fact that their parents' generation doesn't seem all that concerned with ensuring their children and grandchildren will have a "better life"—you know, the one their grandparents came across the ocean for.

Today's money troubles have no precedent in recent history. Young adults are forced to observe as Western financial structures begin to collapse under the weight of unsustainable public debt. Fortnightly Greek bailouts seem incapable of halting Europe's demise. The United States now pays enough interest annually to China to pretty much cover the operational costs of the Red Army (who said Communism was defeated?) and while Canada is something of a bright light internationally, its largest provinces are about to hit the wall. Were it not for the resource economies of the western provinces, the story would be much worse.

Throughout history, younger generations expected that when their parents passed on to the life beyond, they would "inherit" something of value—perhaps it would be as modest as Dad's golden tie-pin, or it could be the farm, but it was something of value, something that had been created through the hard work, thrift, and sacrifice of previous generations. But today, the young are looking at a public inheritance that consists primarily of picking up the whopping tab that the forty-year-long booze-up of the Boomers has and continues to run up. While the previous generation got its money for nothing, the Millennials are doomed, it appears, to have to get by on fewer public services accompanied by a larger tax bill. Even more troubling may be the extremely high levels of personal debt that exist in North America (credit card debt in particular) that make it increasingly likely that when Ma and Pa are gone and the kids inherit the house, they'll find that it, and much of what's in it, has been re-mortgaged to the hilt.

I'm sorry, but I do not know how to fix it. It will take a reconstructed or at least a renewed social architecture to do so, because it is absurd to think that the culture that produced a problem is capable of solving it. What I do know is that vast segments of Western culture no longer believe that life has an eternal aspect, and that without that, there is no foundation for caring about future generations.

They are already saying it. But it is as destructive for them to accept a culture of temporal self-centredness as it was for Boomers to develop and embed it. All of us, sooner than we think, become someone else's previous generation.

For a Great Door is Opened 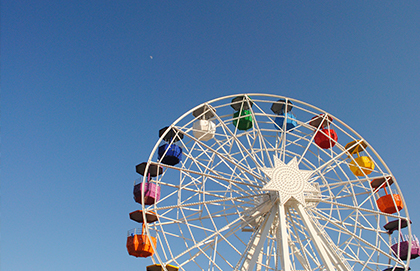 Is business the only game in life worth winning?