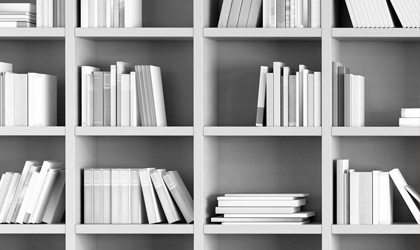 An annotated reading of your world.
by James K.A. Smith 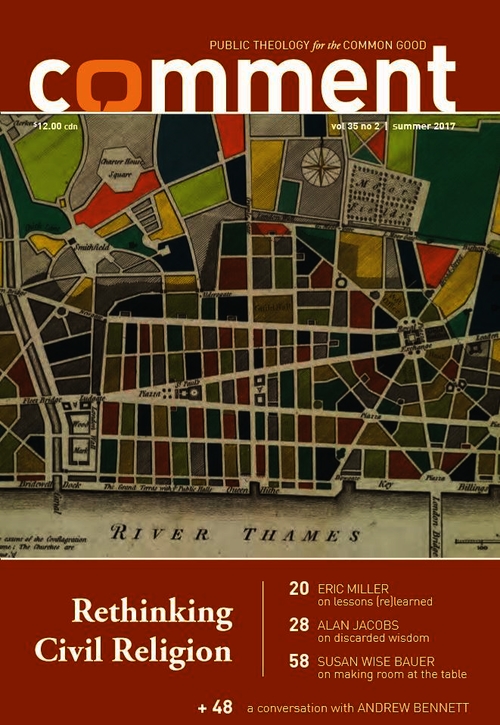 THE REFORMATION WE NEED | This year commemorates the five hundredth anniversary of the Reformation, the date pegged to the actions of an Augustinian monk named Martin Luther. Nailing his Ninety&dash;Five Theses of protest to the Wittenberg door, Luther's pen unleashed cultural currents that contemporary bloggers couldn't dream of.

On a recent trip, I had occasion to recall one of Luther's classic polemical distinctions: the difference between the theologia gloriae, the "theology of glory," and the theologia crucis, the way of the cross. Much of Luther's (Augustinian) ire was directed at the theologies of glory he saw around him that paraded human accomplishment, confident in human ability, promising what Luther's later heir Dietrich Bonhoeffer would call "cheap grace." In his sights were forms of glam Christianity that exuded power and superstition. In contrast, Luther emphasized, the gospel of grace was a theology of the cross: following Jesus would entail suffering, trial, even martyrdom. Don't confuse the way of Jesus with winning, he was saying; don't imagine that Christian faith is a path to "success."

The distinction came back to me while talking to a Roman Catholic woman newly transplanted to the American South. As we reflected on the megachurch evangelicalism that tends to be the default piety of the South, she noted how—well—"perfect" it all was. The upbeat performance was scripted to the minute with concert&dash;quality production value; everyone on stage was beautiful and slim and coiffed; the ethos exuded encouragement, hope, confidence, even cheer. As a Catholic who had spent time in the Latino parishes of Chicago, and impoverished parishes in Venezuela and Brazil, she shyly remarked: "I kept wondering: Is there any room for suffering here?"

Indeed, how ironic. The script has been flipped: so much of Protestant evangelicalism has lapsed into a theology of glory, promising a Jesufied middle&dash;class comfort. In contrast, I replied, it was Pope John Paul II who so powerfully lived the theologia crucis, showing us how to suffer and die as a follower of Jesus. Perhaps one of the ways we can honour Luther's legacy is to bring the Reformation home to Protestantism, and learn to pick up our crosses again.

TAXES AND SOCIAL ARCHITECTURE As I pen this column, many of us are staring down "tax day," as both Canadians and Americans do in April. In the popular imagination, the tax man cometh, grimreaper&dash;like, with a sickle. The image betrays a tacit stance toward government: if taxation is a kind of cancer one hopes to stave off, then the work of government is something we're trying to starve. Maybe it's because I'm a Canadian, or maybe it's because I'm a Kuyperian (or maybe it's because I'm a Canadian paying US tax rates!), but I've never been sympathetic to this libertarian hope of withering the state to nothing, which is also why I've never resented paying taxes. I imagine it as a kind of civil tithe (which doesn't preclude wanting government to be shrewd, efficient, and fiscally responsible).

But a tax code will also tell you a lot about a society and how it imagines its own citizens. Indeed, a tax code is a powerful piece of social architecture that nudges us into particular patterns by rewarding certain behaviours and penalizing others. I have been particularly struck by the way tax codes approach charitable giving, the lifeblood of a robust civil society beyond the state. Each April my Cardus colleagues in Hamilton and Ottawa remind me that giving in the range of 5 percent or higher will trigger an audit from Revenue Canada. Such tax policy looks at what, for Christians, would be a common, even expected, level of giving and effectively says, "We don't believe you." It also subtly communicates that rather than distributing our resources to the non&dash;governmental agencies of civil society, all of these resources should be gobbled up by the state, which will arrogate to itself the exclusive privilege of being caring and compassionate. The logic here is tacitly secularist and hints at a kind of totalitarian impulse: "If you have that kind of money to give away," the state is saying, "give it to us."

In contrast, US tax policy accords remarkable benefits for those who give charitably. There are limits and caps, of course, but they are almost astronomical, relatively speaking. Such tax policy says something about what it expects of its citizens, communicates a high degree of trust, and hence creates a social architecture that encourages the robust civil society that is so distinctively characteristic of the United States. There is a lot to be disheartened about here in the former colonies, but I continue to marvel at the incredible resources that citizens pour into everything from churches and community foundations to Little Leagues and horticultural societies. Tocqueville (and Kuyper) would still be astounded at the entrepreneurial energy and support that is given to let a thousand associations bloom.

CHARITY IS CONTAGIOUS | You can tell a lot about how countercultural someone's faith is by looking at their tax return and checking out the charitable&dash;giving line item. Many of us might not appreciate how remarkable it is to observe the simple Christian discipline of the tithe. If your neighbours knew you lopped off 10 percent of each paycheque for endeavours that serve the Great Commission and the cultural mandate, they would likely (1) not believe it and (2) furrow their brow with a puzzled look. You're giving away a Disney vacation and a shiny new barbecue! (Not to mention all the money you're pouring into the Christian education of your children that could be put toward the coveted time&dash;share in Cabo or a cottage on the lake.)

But many who take this counter&dash;consumerist posture don't talk about it much. This year I've been reflecting with gratitude on a feature of the corner of the kingdom I inhabit—the tribe that calls itself the Christian Reformed Church, particularly as I know it in the quasifamous (or notorious) enclave of Grand Rapids (G&dash;R&dash;usalem, as someone has said). Here, to be a tither or generous giver is common and assumed. It is not the conspicuous giving of the wealthy; it's the baseline practice of everyone across every strata. In that sense, it's also kind of contagious: being immersed in a community that gives means that you're surrounded by exemplars, unheralded local saints who nonetheless are picturing a very different version of the good life. It helps you imagine yourself that way, and over time this same posture is inculcated in you. Some of our most important countercultural stances are quietly inherited.

Perhaps this stands out to me because Deanna and I did not inherit this; it wasn't in the water for us growing up. We had to learn it. In fact, we have a cherished memory of where that education began: at a Pentecostal revival service north of Philadelphia while we were in the voluntary poverty called "grad school," with three kids and a fourth on the way. At the altar call one evening, the pastor prophetically admonished us: there were people in the congregation whom the Spirit wanted to invite into the joy of giving. In fact, he said, you are invited to the altar with your wallets. If you're a cynic (or a Presbyterian), your spider&dash;senses will be tingling here: this is how the fleecing starts. But there was no ask for an offering, no invitation to give. Instead, we brought our wallets to the altar, and the people of God laid hands on us, and on our wallets, and asked for the Spirit to initiate us into the joyful service that is giving. It was a turning point for us.

That doesn't mean we immediately became committed tithers, but we began the journey to giving. And what the Spirit has given us since then is just as important: he embedded us in a generous community whose habits and practices trained our giving muscles so that it's now natural—it's something we do without thinking about it. (It's just this hope of habit formation that animates Cardus's Give150 initiative too.) That doesn't make us special, nor is it a matter of self&dash;congratulation. It's an expression of gratitude that we're learning to fit in to this community of givers God gave us.

UNINTENDED PATRONAGE | I've been spending the last number of months immersed in the life and work of St. Augustine, doing research for my next book project, On the Road with Augustine. In an aside in one of his works, I was struck by a "social architecture" lesson about the unintended consequences of patronage.

Augustine, you might recall, was a "provincial": hailing from the North African precincts of the Roman Empire, his mother and father had high hopes for his future, endeavouring to see him manoeuvre to the centre of imperial power and prestige. This began with a sacrificial commitment to provide him with an education they really couldn't afford. When their own finances ran out, a benefactor stepped up to support Augustine's continued education. Romanianus had met the young Augustine and was singularly impressed by his keen intellect, so he invested in his future, underwriting his studies and also supporting him when he ventured to Rome and Milan.

Augustine's conversion to Christ, however, posed something of a challenge for the pagan Romanianus. After his conversion and baptism in Milan, Augustine and several friends retreated to a villa in Cassiciacum, just north of the city, to create a kind of philosophical monastery for the year, devoting themselves to contemplation and reflection. From this period we have some of Augustine's earliest works, including the dialogue Against the Academicians, which he dedicated to his old patron, Romanianus. The dedication was an opportunity to speak to his friend and, as Justo González has recently put it, "make sure that Romanianus would not think that the money invested in Augustine's studies had been a waste." But it turns into an invitation for Romanianus to follow him on the way to the One who is wisdom. Augustine writes:

That trait, that disposition of yours that has always led you to seek honesty and beauty, and which has made you to be more liberal than rich, by which you preferred to be just rather than powerful, without ever yielding to adversity or injustice, that was I know not what divine gift in you. This was buried in the lethargic dream of your life. But now the hidden providence of God has decided to awaken it with these various and shattering events.

When Romanianus invested in Augustine, he probably saw a channel to the levers of power in Rome. What he couldn't have imagined is that he was investing in someone who would reshape the world, becoming one of the preeminent doctors of the church. Romanianus's patronage of a friend of the family turned out to be a surprise investment in the kingdom of God. And there's a wonderful coda to the story: Romanianus also became a Christian in the subsequent years, and so he is no doubt grateful for God's providence guiding his patronage in such surprising ways. 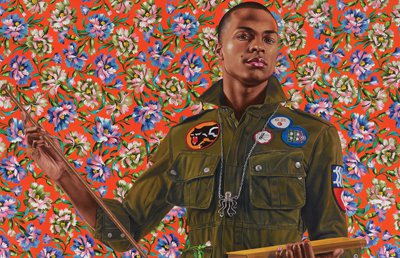 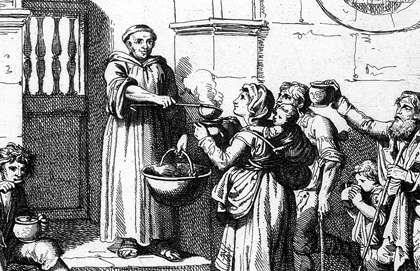