Fr. Deacon Andrew served as Canada's first Ambassador for Religious Freedom and led the Office of Religious Freedom from 2013 to 2016 in defending and championing religious freedom internationally as a core element of Canada's foreign policy. He simultaneously served as Canada's Head of Delegation to the International Holocaust Remembrance Alliance -a 31-country body which leads international efforts in Holocaust education, research, and remembrance.

As Director of the Cardus Religious Freedom Institute, Fr. Deacon Andrew works to promote religious freedom and the importance of public faith to our common life. He also leads Cardus's engagement with faith communities across Canada and Cardus's program of public theology. Fr. Deacon Andrew is a Senior Fellow at the Religious Freedom Institute (RFI) in Washington, DC - a leading independent think-tank committed to achieving broad acceptance of religious liberty as a fundamental human right for everyone, everywhere.

Fr. Deacon Andrew holds a Ph.D. in Politics (2002) from the University of Edinburgh as well as degrees in history from McGill and Dalhousie universities. When not praying, studying, or advocating, Fr. Deacon Andrew can be found with his fly rod in a stream, listening to bluegrass or Beethoven, or reading the Church Fathers. 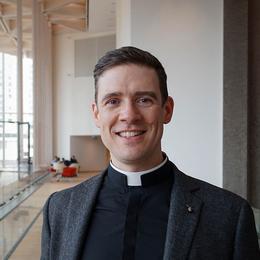