Abram Van Engen is Associate Professor of English at Washington University in St. Louis and an affiliate of the John C. Danforth Center on Religion and Politics. His work primarily involves religion and literature, focusing on Puritanism and its role or remembrance in American culture. His first book is Sympathetic Puritans: Calvinist Fellow-Feeling in Early New England (Oxford in 2015). His articles have appeared (or will appear soon) in The New England Quarterly, The Massachusetts Historical Review, J19, Early American Literature, Legacy, Pedagogy, and American Literature and the New Puritan Studies, as well as online at Religion and Politics and The Conversation.

His current project, The Meaning of America: How the United States Became the City on a Hill (under contract with Yale University Press), offers a biography of John Winthrop’s “city on a hill” sermon, A Model of Christian Charity, from 1630 to the present day. The first article from this project won the Whitehill Prize in Early American History, and it has been supported by multiple fellowships, including the National Endowment for the Humanities. 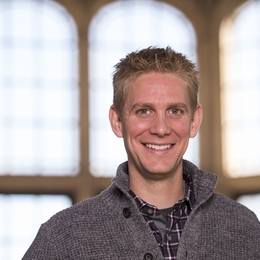