Timothy Sherratt is Professor of Political Science at Gordon College, Wenham, MA, where he teaches American politics, constitutional law and Christian political thought. Growing up in southwest England, he attended Anglican boarding schools and later received his B.A. and M.A. from Oxford University where he read Philosophy, Politics, and Economics at Hertford College, and made a profession of faith. He received his Ph.D. in political science from the University of Kentucky in 1983. He is the author, with Ronald P. Mahurin, of Saints as Citizens: A Guide to Public Responsibilities for Christians (Baker, 1995). He has authored chapters in two books, and his work has appeared in The Christian Scholar's Review, Catholic Social Science Review and The Review of Faith and International Affairs. He is a regular contributor to Capital Commentary, the online journal of the Center for Public Justice (www.cpjustice.org) based in Washington, D.C. He and Christine have four children, not to mention a voracious Labrador, and live in Rowley, MA. They worship at All Saints' Anglican Church, Amesbury, where he is Junior Warden. He is currently working on a second book on politics and Christian citizenship. 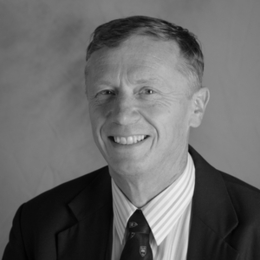