Our culture does not know how to deal with legacies. We either treat the dead with some combination of awe and fear, or we think of our forebears as unworthy of remembrance, to be cast behind our own pursuits and discoveries.

In this issue of Comment, we reject both our tendencies to ignore and to idolize the past. Instead, we seek to draw the good out of legacies, as we acknowledge that all legacies east of Eden will always be, at best, mixed.

20 Articles In this Issue

Looking graciously back on the giants before us.

06
Footprints in the Snow by Calvin Seerveld

"Men and women resist believing that they follow beaten paths. But they really become insufferably proud when they look around and think they leave no tracks."

"There's got to be something more than what I'm living for."

Her fiction occupies an odd space, resuscitating the nerve-endings of our souls.

38
Skepticism and Witching Worries: Twin Legacies of the Fifteenth Century by Richard Oosterhoff

Millennia of tension in Christian materiality can be instructive as we move past modernist narratives of science at war with religion.

His legacy holds hope for returning the Western tradition to wonder, to adventure, to anticipation.

50
To Play Well With Others: A Letter of Gratitude to Jim Henson by Jeffrey Overstreet

When did "hard-working, successful, creative" become our virtues of choice?

We cannot afford the infrastructure and living arrangements we have built to centre our lives around the automobile.

69
For a Great Door is Opened by Deani Van Pelt

75
The Liberty She Won for Others by Karen Swallow Prior

81
Something Beautiful for God: The Gift of Jean Vanier by Craig Bartholomew

86
Erasmus is an Eel: Renaissance Humanist Hero by Gregory Wolfe

His passion and networking skills could make him the patron saint of the twenty-first century.

"When I look at Warhol, what I feel is maximum redemption of lost material. He puts meaning back where there was deadness." —Wayne Koestenbaum

98
The Political Legacy of Superheroes by Adam Barkman

106
The Dignity and Priority of Labour by Micah Lott

Studying John Paul II's Laborem Exercens as not the "last word," but the "first word" on economics, human rights, and justice.

Products become obsolete; people grow. Which legacy of leadership is likely to stand the test of time?

121
The Art of Passing on Wonts by Gideon Strauss

The true measure of our legacy is the depth of our gratitude, not the shimmer of our moral and technical excellence. 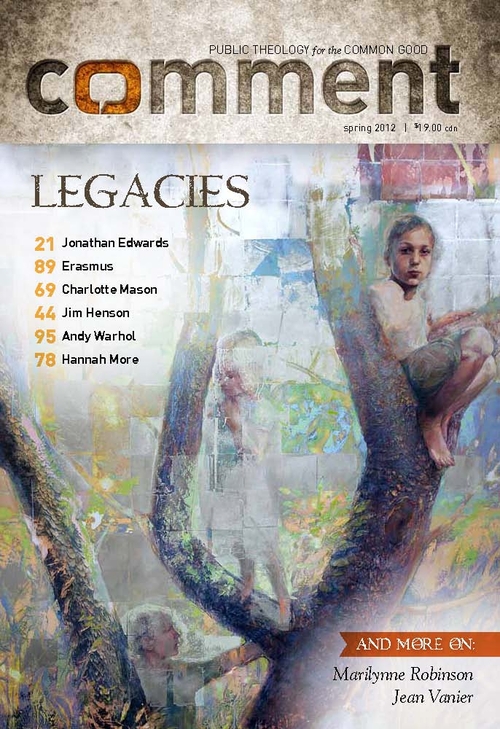