Making the most of college (fifth annual)

Making the most of grad school, of trade school, of law school, of seminary or art studio—begins when you realize where you stand: in the presence of the God who made and patterned all things slowly, according to a mysterious and often frightening design, who in Jesus Christ wrought justice upon the evil we drag around in the world, who by the Spirit offers us comfort as we work towards and await the time when "this too shall be made right."

I have my students read Calvin Seerveld, and I make them take off their shoes in class because, really: when we study God's world—the tiny creatures under our microscopes, the vast galaxies within which our sun and planet whirl, the ways of men and women selling and buying in markets, the making of love and war and law and sausages—we are in the very presence of God.

06
Muscle Memory and the Frenetic Student by Ben Bouwman

Reggie Miller's buzzer-beaters were thrilling and memorable. Less exciting: the slow, repetitive training he and we go through to thrive at the right times: at the free-throw line or in class.

Vocations of all sorts are equally important to the work of God in the world, as each one contributes to the common good, to what it is that makes our common welfare a place for more rather than less flourishing. In the life of Dave Kiersznowski and his DEMDACO Corporation, I see this become flesh in his business and life commitments.

"Suppose," the Gospel says, "one of you wants to build a tower. Will he not first sit down and estimate the cost to see if he has enough money to complete it? For if he lays the foundation and is not able to finish it, everyone who sees it will ridicule him, saying, 'This fellow began to build and was not able to finish.'" Darn good advice.

When you are sixty-five years old, going back to school is both formidable and frightening. Here's my advice for those who, like me, are returning to school later in life.

There was a prolonged period recently when the words "traditional" and "craftsy" were the kiss of death for an artist's career. One result is that in the past several decades, artists of every discipline have been trained with the primary expectation that they shall produce new and sometimes shocking objects; choreograph daring dance movements; compose provocative musical pieces or poems—and in many cases, skill has been moved to the margins or completely off-stage. But in recent decades the centrality of novelty and the demand for an art centred primarily on ideas and issues has lessened a bit—a pendulum swing away from experimentalism.

A Comment symposium on academic-borne friendships that beat the odds.

50
Inside the Second Black Box by Ray Blunt

Great leaders are driven not for their own success, but by a sense of purpose for their organization and the people in it. And they possess an all-too-rare humility.

54
Spinning and Being Spun by Nancy Nordenson

Have I done the work I was made for? 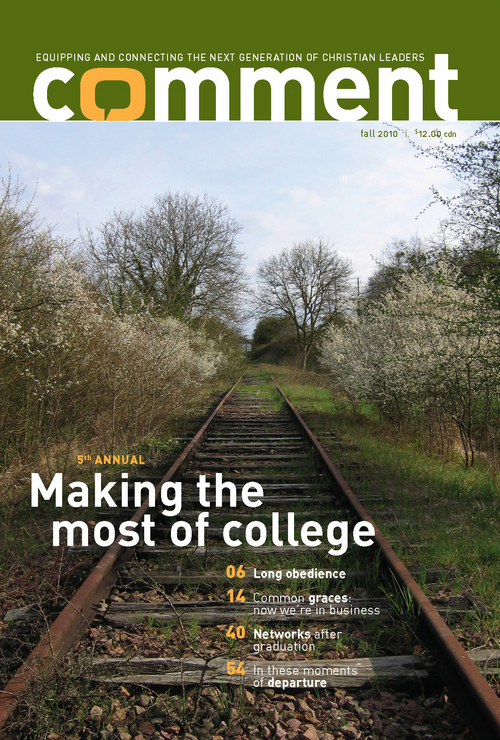