Making the most of college (first annual)

This issue of Comment explores the possibilities and challenges of college life, with an emphasis on the big questions of life. Comment is committed to cultivating the next generation of cultural leaders. It is, indeed, in the college years that most people make the decisions that will guide them as they provide leadership throughout their adult years.

9 Articles In this Issue

02
Editorial: Making the most of college by Gideon Strauss

The ancient Greek philosophers pondered life's ultimate questions: Who am I? Where did I come from? Where am I going? Why am I here? They are the questions posed to college and university students in this introductory editorial, and Comment editor Gideon Strauss adds a fifth: Who loves me and what and whom do I love? And he implies that life's ultimate questions are ultimately religious.

06
Making the most of college: learning to love good books by Byron Borger

Books or movies? Word or image? Byron Borger doesn't think it's a case of 'either or.' Instead, Borger insists that readers can approach all of life—tasks and people, classes and socializing, parking oneself in a study carrel and taking a road trip, engaging in a class discussion and a conversation on a first date, or learning how to use a library catalogue and how to cook a first meal—by reveling in the joy and discipline of reading.

12
Making the most of college: learning from history by Russ Reeves

Those who fail to learn of and from history cannot fully know who they are or the world in which they live. They diminish themselves. They are not only child-like, they are childish. Likewise, a culture that sees only itself and its time without referencing the past is incapable of growing. Because it cannot learn from the past, it is not teachable in the present.

18
Making the most of college: philosophy as schooled memory by Calvin Seerveld

Western culture runs itself by the notion that something is only good if it can "do" something—that people are to be valued on the basis of what they can do or produce. Calvin Seerveld attacks the understanding of philosophy as a "tool" with an "instrumental" value. He suggests, instead, that philosophy precedes and grounds human—including students'—thinking and talking and writing. Seerveld describes neocalvinist philosophy in these terms.

24
Making the most of college: looking at paintings by Chris Cuthill

Art is more than a weather forecast or a financial statement, which experts can interpret for us. A student of art is required to personally engage art, and Chris Cuthill suggests three interdependent methods: from one's own worldview, from dipping into the communal experience of a work through others' interpretations, and through the surface plays of colour and texture.

34
Making the most of college: making friends for life ('I want to be tangled up . . . in the thorns of love') by Greg Veltman

colÂ·lege ('kä-lij) n. [Middle English, from Old French, from Latin collegium, association. The students, faculty, and administration of such a school or institution. A society of scholars for study or instruction. A body of persons having a common purpose or shared duties. To know and be known, to consider one's life in the community that is a college.

40
Making the most of college: asking big questions by Gideon Strauss

Pop quiz: What do I love? What do I believe? Where do I belong? Who am I? What hurt needs healing in the world? What potential waits to be realized? What is to be done? Read it. And, yes, it will be on the "final."

50
Making the most of college: heavy weights, big questions, and the public square by Michael Metzger

When President George W. Bush was asked who his favourite philosopher was, and he answered, "Jesus Christ," was that "too much?" Mike Metzger offers his 'take' on how explicit students should be about faith on campus—even on campuses founded with an informing religious ethos.

54
Making the most of college: writing with purpose by Jeffry C. Davis

Where art has it over life is in the matter of editing (Larry McMurtry, "'Mary Hartman, Mary Hartman' and the Movie-Less Novelists," 1987). At its best, good writing develops good character. Today, Jeffry C. Davis suggest five ways that a faith-filled student can transform college into something worth the time, money, and effort—to the glory of God. And each of his proposals depends, to greater or lesser degrees, upon the careful use of words. 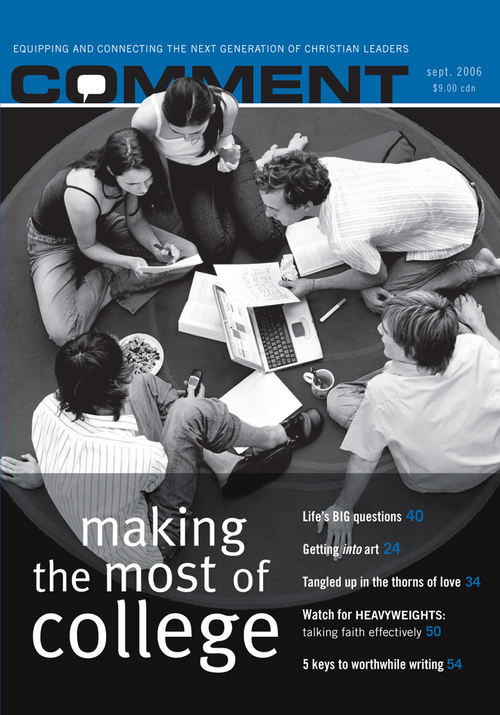