Kids in Wealthiest Provinces Most Likely to Have Married Parents 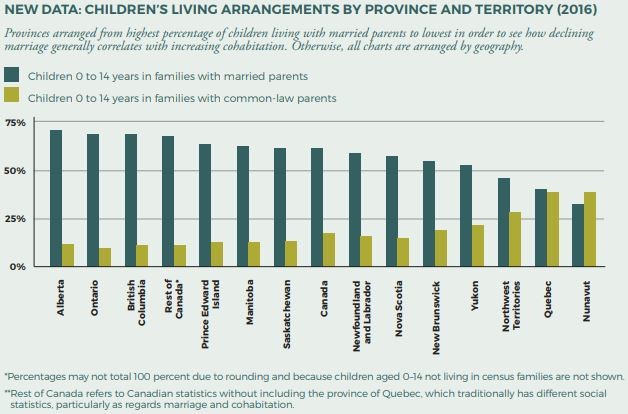 “Marriage is the gold standard for raising children, so it’s heartening to see that married parenting is still by far the norm in most of Canada,” says Andrea Mrozek, family program director at think tank Cardus. “Still, the trend in every part of the country is toward less marriage and more common-law parenting. Common-law relationships are more likely to break up than marriages are. And having married parents is also associated with more financial stability and kids doing better in school, so there are public policy implications as marriage declines.”

The 2016 Census data also show that a majority of kids in Nunavut, the Northwest Territories, and Quebec, have parents in common-law relationships or live in single-parent homes. And with the exception of Prince Edward Island, only a small majority of kids in Atlantic Canada are living with married parents.

“The research very clearly shows that marriage is more stable than cohabitation and stability matters for children,” says Mrozek. “We need to educate Canadians on this and enact public policy that reflects this reality.”

The full provincial and territorial breakdown of 2016 Census family data is available online.