A Bridge Between City and Church

This book is theologically rich and philosophically informed, yet accessible and filled with practical wisdom. Drawing on decades of study and ministry, Every Good Endeavor may soon become one of the most important contemporary books on faith and work. 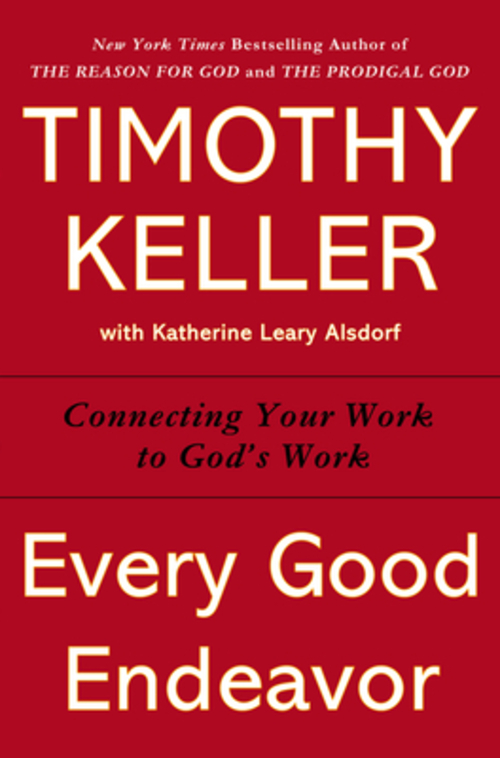 
When British missionary Lesslie Newbigin returned from the mission field in 1974, he was often asked, "What is the greatest difficulty you face in moving from India to England?" He always responded, "The disappearance of hope." During the forty years he spent in India, the West had lost a sense of direction. The idea of progress, so strong in the 1930s, now seemed clichÃ©. Adrift in a sea of pluralism, many youth became little more than isolated individuals pursuing personal gain. Ministers and academics began to question how to address this hope-starved generation. American sociologist Robert Bellah proposed a humble remedy: "To make a real difference . . . [there would have to be] a reappropriation of the idea of vocation or calling, a return to the idea of work as a contribution to the good of all and not merely as a means to one's own advancement."

Today a renaissance of the idea of vocation has planted seeds of hope throughout Western cities. There have been few more integral to this movement than Timothy Keller, pastor of Redeemer Presbyterian Church in New York City. Since 1989, Keller's writing, preaching, and teaching have impacted thousands. Now Keller, arguably the most culturally influential evangelical alive, has published his masterwork on faith, work, and culture. Every Good Endeavor: Connecting Your Work to God's Work is theologically rich and philosophically informed, yet accessible and filled with practical wisdom. Drawing on decades of study and ministry, Every Good Endeavor may soon become one of the most important contemporary books on faith and work.

In the beginning, God worked. The creation of supernovas, salamanders, and stingrays is described in Genesis as work (Genesis 2:1-3). God's work is creative, ongoing, and deeply satisfying (1:31). Human work, then, was not originally a form of punishment (as so often seems the case), but a part of paradise. We are made in the image of the Maker, and called to create and "fill the earth and subdue it" with a thriving human culture (1:28). As God's representatives, humans are charged with taking the natural world (2:15) and forming it for human flourishing.

This biblical notion that work has inherent dignity is unique. The ancient Greeks thought work was a demeaning necessity. To become like the gods, humans were to withdraw from active life and contemplate ideas—better to leave the work to the slaves. Yet the Bible tells us when God became flesh, he chose to become a carpenter. For Christians, every good endeavour has dignity because it is the means by which God provides and cares for our needs. Martin Luther writes,

God is the one quietly behind our work, providentially sustaining human life. In stark contrast to views of work as a necessary evil, the Bible views work as a gracious gift by which we serve our neighbour and show love for God.

Yet work is not as it should be. Although work itself isn't under a curse, "thorns and thistles" grow up amidst our labours (Genesis 3:17), and our aspirations often become fruitless and frustrated. Antonio Salieri in Peter Shaffer's play Amadeus desires musical greatness, but ultimately must accept his mediocrity compared to his rival Mozart. When the Teacher of Ecclesiastes realizes he will leave his estate to others who haven't earned it, he laments "I hated life, because the work that is done under the sun was grievous to me" (Ecclesiastes 2:17). Our desire for lasting, meaningful work is often thwarted by sin, and our best efforts to build, create, and achieve often evaporate into thin air.

Perhaps the thorniest effect of the Fall is to seek our identity by "making a name for ourselves," (Genesis 11:2-4). The incessant attempt to prove our worth through work leads to what Keller calls "the work under the work"—the quest for self-justification through our accomplishments. Work can be both selfish and controlled by idols. The market is often made into a god when consuming new products becomes the highest good. Even new technology, like our smartphones, can even be idols when uncritically adopted without guidance from any higher values. As Nietzsche said, "there are more idols than realities"—and they struggle for power in our nine-to-five offices.

But the gospel frees us from idols by giving us a new storyline for our work. For example, when Don Flow, owner of a car dealership, learned women and minorities were paying more for cars than white males with negotiating skills, he decided to set a flat rate on all cars. The gospel shaped his view of justice and profit was put in its proper place behind communal shalom. The gospel leads journalists to write stories of hope, artists to balance optimism with realism, and doctors to seek healing not only for flesh but lives as well. For many, work is the best place to carry out Jesus's command to "Love one another as I have loved you" (John 13:34).

One of the great benefits of the gospel is a deep, abiding rest. Christ's work on the cross is finished, and no amount of work can add to the gift of eternal life. Keller writes:

You are justified in God's sight, so you have nothing to prove. You have been saved through a dying sacrifice, so you are free to be a living one. You are loved ceaselessly, so you can work tirelessly in response to a quiet inner fullness.

It is this deep rest infused by God's grace that led jazz legend John Coltrane into the most productive era of his career. In 1957, he asked God for the privilege of bringing joy to others through music. In the liner notes to his album A Love Supreme, he wrote in gratitude, "This album is a humble offering to Him. An attempt to say 'THANK YOU GOD' through our work. . . . May He help and strengthen men in every good endeavor."

Every Good Endeavor is a sublime work of intellectual breadth and theological depth. It's a rare pastor who can extract wisdom from John Calvin and C.S. Lewis alongside of New York Times Columnist David Brooks and poet W.B Yeats to illustrate his point. Tim Keller's encyclopedic learning is indeed rare for anyone, minister or not. Yet it's not only quotes from French philosophers and Ivy League professors that give Every Good Endeavor wings; the quality of theological reflection ultimately makes the book glow with wisdom. Keller drills to the core of the creation narrative to cement his theology of work, and he laces each chapter with clear biblical exegesis. It is no wonder Keller has become the preeminent bridge between city and church in the twenty-first century.

Every Good Endeavor will soon become a classic on faith and work, not only because it's intelligent, but because it's accessible. First, Keller has a deep pastoral connection to the topic. His theories are under-girded by ten years of ministry with Katherine Leary Alsdorf at Redeemer's Center for Faith and Work, and decades more of personal experience. He knows the eighty-year-old pioneer of hedge funds who senses a declining optimism among young professionals. He's counselled twenty-year-old Andrew who's terrified of accepting a warehouse job for fear of becoming vocationally trapped. For Keller, the topic is not just intellectual; it's an intimate matter of discipleship.

Second, the book is well organized and loaded with practical wisdom. Written in clear prose, it offers practical guidelines on how to choose our work and outlines a redemptive ethical framework for both employers and employees. One page offers specific questions to help readers think about their work with a Christian worldview—it almost begs for candid small group discussion.

Third, and perhaps most importantly, Every Good Endeavor is accessible for both Christians and non-Christians. Keller is able to see issues as both a Christian and an outsider, and he solidifies his views in a robust theology of common grace. Advancements in art, technology, or management are gifts from God (James 1:17), and God uses non-believers to accomplish his purposes (Isaiah 54:1). Common grace, Keller writes, "should lead us to freely and humbly work with others who may not share our faith but can be used greatly by God to accomplish enormous good." Keller avoids the equally destructive paths of cultural disengagement or religious triumphalism, forging a distinctive middle road that has opened the ears of more than one New Yorker.

Work is about culture. This is what so many faith and work books fail to understand, and what Keller perceives with adroit clarity. If work ceased tomorrow, as author Lester DeKoster says, food would vanish from shelves, roads would deteriorate, lights would shut off, and civilized life would melt away. It may seem odd to many that the sage of Manhattan would pay such careful attention to faith and work, but Keller rightly sees that work is about creating culture. He is seizing the moment to plant seeds of cultural renewal—and it's working. He's one of the reasons why many young Christians are stirring new conversations of faith and work in their own cities.

Light for Our Secular Duty

In the mid-1980s, Lesslie Newbigin perceived that the West had become a mission field. After wrestling with the problem of how to make public witness to the gospel in a post-Enlightenment culture, he concluded,

And we need to create, above all, possibilities in every congregation for laypeople to share with one another the actual experience of their weekday work and to seek illumination from the gospel for their secular duty. Only thus shall we begin to bring together what our culture has divided—the private and the public. Only thus will the church fulfill its missionary role.

When pastors begin to see that the faith and work conversation is ultimately about mission, new initiatives will spring up in churches across North America. But for now, a good first step would be to find a friend, grab a cup of coffee, and begin to absorb the light of Every Good Endeavor. 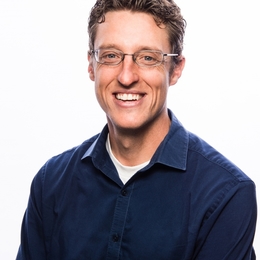 Jeff Haanen is the executive director of Denver Institute for Faith & Work and the founder of Scatter.org, a free Christian learning platform for working men and women. He’s also the author of An Uncommon Guide to Retirement: Finding God’s Purpose for the Next Season of Life.

Tenth in an expert series on must-read books. 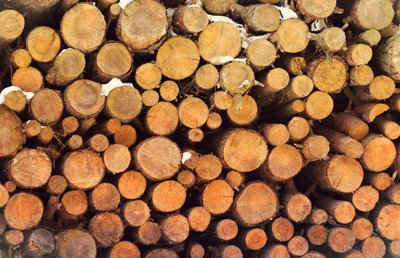 A Seamless Fusion of Beauty and Utility

It's easy to wax eloquent about woodcutting while disparaging "big" industry, but there's more to the story.