It is when I return to work that I have done in the past, to the carpentry and woodworking and published poems and books, that I see the faith that breathes in and breathes out.

How do art and workmanship flow out of faith? They flow in ways many and mysterious.

Like most artists, I have a bread-and-butter job. I support my writing of poetry and non-fiction with cabinet-making and carpentry. These and other crafts, like art, are about the handling and shaping of what you are given: your material, whatever that material is.

This January my work partner, Tim, and I took on a job in the sanctuary of a church. We tore out the two steps leading up to the dais. The choir used the two stairs as risers, and the altos and sopranos no longer wished to have their heads used as music stands by the basses and tenors. We remade the stairs deeper and wider, using the backs of a few wooden pews no longer in use. We also re-fit the pulpit into a new location and moved and re-jigged some carved wood screening.

We were hired because a few years ago, I had refurbished the kitchen cabinets in the home of a member of the committee, and he had faith that we could, and would, do the job well. When I first saw the scope of the project and its complications, I wondered if maybe his faith was misplaced.

Six months later I attended a summer worship service in that church. While sitting there, it hit home to me how our work, long since finished, was part of something much bigger. It participated in the decades of woodworking that had taken place during the building's construction and in the subsequent alterations. It was part of a continuum, a kind of crafted cloud of witness. At the time, we were so wrapped up in the demands and particularities of the job that we were hardly conscious of how new and old were knitting themselves together. As we stood back now, only he and I and the committee member could unravel it. It was new yet looked original, as though it had always been, and so was unnoticeable.

t is a kind of faith to not look up from the plough, to trust enough that you are able to lose yourself in the doing and making. And it is when I return to work that I have done in the past, to the carpentry and other woodworking projects I have done as well as to the published poems and books, that I see the faith that breathes in and breathes out—that gives me life, day by day, even as I take it for granted.

You don't always know where this faith is going to take you. I once presented a proposal to a church to provide a cross to hang on the wall behind the pulpit. I was not thinking of well-crafted beauty using exotic and domestic woods, and I wasn't thinking rough-hewn simplicity in timber, for neither of these appealed to me. My idea was to find a natural cross shape within a growing tree. I had a notion that something was going on up there within the branches.

I assumed a pine, oak, black cherry, or some other local tree could provide the shape, and until the proposal was accepted and my search began, I did not realize that no tree, at least in our bio-zone, branches in the vertical/horizontal balance I was looking for. In order to find such a tree I needed to go where trees behave in an unnatural manner, where they have been heavily pruned over many seasons. I would need to go to an orchard. Again, maybe I'm thick, but I did not then clue in to how appropriate it was that the cross-shape I sought was in the garden, the place where the offense first was committed that made the cross necessary. I was looking to fulfill a contract. This was a woodworking project, not a theological construct.

I discovered a derelict orchard slated for light industrial development in a town nearby, walked through carrying a Swede saw, found the shape I was looking for, cut it down, and started hauling it to the car. It was surprisingly heavy. A thicket of tall weeds and loped branches reached their fingers and scratched and grabbed for me like the crowd on the way to Golgotha. I was now beginning to experience the uncomfortable resonances. Who was I in this story: the betrayer or the betrayed? Or both?

In the workshop, I laid my quarry on the bench I normally used to elevate and work on furniture and began the process of peeling and stripping the bark from the trunk and two branches. This now seems almost too graphic, too forensic, to relate. I then propped its nakedness outside in order to dry.

My true turning point in recognition came over the next couple of weeks, as a crack developed on the main trunk. My initial thought upon seeing the crack was expletive. A craftsman desires to deliver perfection to the client, or something near to it, and cracks are anything but. Heedless of my desire or intent, the crack lengthened and widened daily, and I realized that I had better start thinking of it as a virtue or I might have to scrap the entire project. At last its topmost point reached the vertical/horizontal intersection of the branching, in the dead centre of the cross. It split the small knot there and stopped.

I finally saw it: the connection between the suffering of Christ and all creation. Oh, and my own place in it.

The cross still hangs in that church, and for me one commission led to another. The music director asked to have the story of the orchard, the tree, the cross, and Christ told in fourteen poems that could serve as Fourteen Stations of the Cross, to be read at a Good Friday service, for which he would write the music. He had faith that I could pull it off. I thought that maybe his faith was misplaced, but he knew me better than I knew myself.

An artist's life flows out of and through a faith that is both personal and communal. And art flows out of life.

The making of a work of art is an act of faith. An artist is as clueless about what will next happen in his work and life as any person who steps out her front door (which is also an act of faith) about what that day will bring. It may be faith in God or faith in self, it may be faith in the universe. It may be blind and unspoken, or it may become the very air your art breathes in and out. 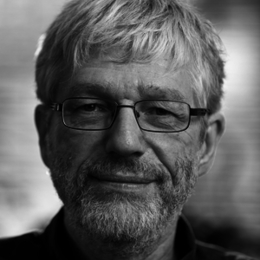 John Terpstra’s most recent work of poetry is called Mischief (Gaspereau Press 2017). An earlier work, Brilliant Falls (Gaspereau Press 2013) was shortlisted for the League of Canadian Poets Raymond Souster Award. His latest non-fiction work is The House With the Parapet Wall (Gaspereau 2014). His previous non-fiction work, The Boys, or, Waiting for the Electrician’s Daughter (Gaspereau 2005), was short listed for both the RBC Taylor Prize and the BC Award for Canadian Non-fiction. He has won the CBC Radio Literary Prize for Poetry, the Bressani Prize, and several Arts Hamilton Book Awards for both poetry and non-fiction.

The Ethics of Attention in an Age of Distraction

Why you need to get out of your own head.

Get Your Hands Dirty: The Vocational Theology of "Luther"