No one is saying that sinking a three-pointer at the buzzer is better than teaching kindergarten—at least I hope no one is. But it is more amazing.

Complaining about athletes' salaries is almost as common as complaining about the weather—and about as useful. Nearly everyone at some point has thought (or said), "Why do we pay these people so much? All they do is play silly children's games. Surely that money would be better spent on cancer research."

Probably so. But we, the people, enjoy attending sports events more than we enjoy contributing to cancer research. So, like with many things we complain about (though not the weather), the fault for these astronomical salaries lies within ourselves.

Wait—is it my fault that an average NBA player earns $4.9 million U.S. per year? Well, yes, it is, unless you avoid watching sports altogether. Player salaries are, as economists like to point out, a function of economics, and the usual argument for the rationality of these irrational wages is an economic one. But I want to make a different argument.

First, however, let's review the economic arguments, of which there are two. First, the economist would say, is the argument from scarcity. NFL quarterback Peyton Manning earns $21.2 million for sixteen days of work (actually a lot more work than that, but you know what I mean) because very few people, it turns out, are able to throw thirty touchdown passes in a season with very fast 300-pound men running toward them with their hands in the air. That particular "skill set," as human resource wonks like to call it, is exceptionally rare, despite what Uncle Rico may tell you. So rare, in fact, that if you have it, you can pull in $1.3 million a weekend if you can demonstrate it on a consistent basis.

The other economic argument is about rational markets. Peyton Manning can earn his $1.3 million for showing up at work on Sunday because he and his Indianapolis Colts teammates can generate $203 million in revenue (at least, back in 2007), making Manning's salary a costly, but quite affordable, item on the expense ledger. If the Colts were only able to generate $20 million in ticket sales and broadcast rights in a year, Manning's salary would be closer to $2 million than $22 million. Only very seldom do teams pay star players more than the team can hope to recoup in revenues, and those teams usually end up being sold for scrap.

The objection that always comes up at this point is about school teachers. Isn't a teacher who is personally shaping the young minds that will be the next generation of community and world leaders (and NFL quarterbacks) worth as much or more as an ectomorph who can throw a ball? Well of course, and of course not. We are confusing, at this point, economic value with a more philosophical idea of importance. Of course educating young minds is important—arguably much more important than avoiding the pass rush. But economics aren't interested in importance, only in relative scarcity and rational markets. And the sad fact (actually a rather happy one) is that many more people can teach kindergarten than can play in the NFL, which exerts downward pressure on teachers' salaries, and upward pressure on players' salaries.

These economic arguments—relative scarcity and rational markets—strike many as insufficient. And I do think another argument is needed. I'd like to advance a third argument for athletes' salaries: the argument from awe.

When you talk about Peyton Manning's hourly wage, you place him in the same category as puddlers and policemen, in which clearly he is not. I would argue that the main reason Mr. Manning earns $1.3 million per game is because he is amazing. And we humans, at least in wealthy societies, place a pretty high value on amazement.

Think about what you pay for a dinner in a restaurant: ten dollars? Twenty? Forty? Now what do you pay for an amazing dinner, one that sends your senses into the stratosphere? A hundred dollars? More? Granted, we do this rarely, but when your anniversary is divisible by ten, you want to be amazed. And you will pay for it—a lot.

Sports, I submit, are in the same category as anniversary dinners and Cirque shows. We don't plunk down north of a hundred dollars for an NFL ticket to see Uncle Rico throw a football through a tire. We buy the ticket (or we subscribe to the cable company or Dish Network or go to a local sports bar) to be amazed by Peyton Manning, or Ben Roethlisberger, or Drew Brees avoiding the rush, running and throwing, off balance, to a receiver twenty or thirty yards away who turns and looks at the last possible second for the incoming pass and collects it with one hand with the nonchalance of a tollbooth attendant.

Amazement—our amazement—is what makes that average NBA player worth his $4.9 million salary. No one is saying that sinking a three-pointer at the buzzer is better than teaching kindergarten—at least I hope no one is. But it is more amazing.

There is a reason that sports stars are called stars and not "sports workers." Stars—of both kinds—fill us with awe and wonder. They remind us of the infinite possibilities of imagination and creativity in the physical realm, the realm of our bodies (which, for far too many of us, are far enough from excellence to suggest a chronic vegetative state). Professional athletes' salaries are astronomical because the athletes themselves are astronomical. They operate in the very thin air of what is humanly possible. And for that, I not only tip my (extravagantly overpriced fitted wool) team ballcap to them, but I promise to stop complaining that they make too much money. At least until the next round of contract negotiations.

Racism: Does the struggle continue? 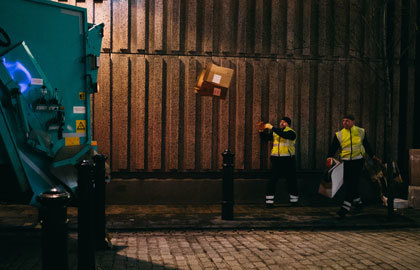 How Garbage Collectors Can Refresh Our Theology

Scraping back the veneer called "vocation."