There are good books to be written on Catholic social thought. Milburn could doubtless have written one had he stuck to his theme of Christ at the heart of the whole church's social mission. 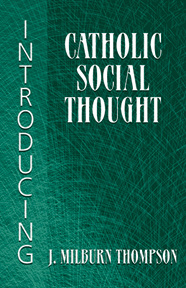 
A strength of J. Milburn Thompson's recent book on Catholic social thinking is the way it firmly establishes it as wholly Christian in character. Whatever divisions the Reformation and Counter-Reformation wrought, Thompson writes, the true measure of the Catholic Church's social thought is the degree to which it universally corresponds to Christ.

Early on, he draws from the example of a communitarian Southern Baptist group whose leader challenged his own brother to be a disciple—not merely an admirer—of Christ, and to go all the way with him to the cross. This he links with Mother Teresa's challenge to meet Christ in the distressing guise of the poor.

While scholars typically date formal Catholic social teaching from Leo XIII's 1891 encyclical Rerum Novarum, Thompson argues its essence was introduced to the world when the earliest Christian communities strove to live the Gospel message of generosity, mercy, justice, and charity. Indeed, he points out, they were renewing the Old Testament's injunction to love God by caring for widows, orphans and strangers.

The weakness of Introducing Catholic Social Thought, unfortunately, is the way its strength flags so quickly. Part of the enervation is caused by structure. Much of it (more's the pity) is the sapping power of Church politics.

The Introduction is just that. It is aimed at undergraduates, parish study groups, and those who are otherwise unfamiliar with the rich corpus of Catholic writing on social issues. Necessarily, as a primer, it must adjust its language and its intricacy to its intended audience. But there is a vast difference between simplicity, simple-mindedness, and plain silliness.

Thompson laudably seeks to provide the historic background against which Catholic social thinking emerged. Unfortunately, he had space only for a series of thumbnail sketches from the Patristic Fathers to Vatican II that fail to come anywhere close to doing justice to each period and, worse, lapse into unwitting caricature of a crib-note version of history.

Compounding the structural defect of cramming too much background into too few pages is Thompson's ill-advised decision to inject into an introductory work his personal take on Church politics. What results too often belongs to the puppy-lick school of progressivism: sloppy, sad-eyed, and ingratiating.

To take but two examples from many, we are directed to be shocked—shocked!—by the Church's "reactionary" discomfort over the French Revolution without any acknowledgment that perhaps there was good reason to be outraged by The Terror.

Whizzing through the centuries, Thompson accuses the entire Catholic Church of sparking the Reformation by "insensitively" using the money from the sale of German indulgences to build an Italian basilica (St. Peter's). He then singles out the current German pope for being insufficiently open to dialogue with Protestants.

Given Benedict's XVI's historic, triumphant visit to Britain in 2010, the latter charge is not merely wrong. It is inane. Worse, it is utterly unnecessary. It turns a first look at Catholic social thinking into factional arm waving interesting only to those ideological warriors who can't let go of 50-year-old (or even 500-year-old) feuds.

There are good books to be written on Catholic social thought. Milburn could doubtless have written one had he stuck to his theme of Christ at the heart of the whole church's social mission.

For those who don't want to wait any longer for their introduction to Catholic social thinking, the web is abundant with resources that are a great place to start. Here are a few:

In 2004, at the direction of Pope John Paul II, the Pontifical Council for Justice and Peace produced a Compendium of the Social Doctrine of the Church. It is exhaustive but well-organized and accessible. As Cardinal Sodano said in his introductory letter, the "text has been presented in such a way as to be useful not only from within (ab intra), that is among Catholics, but also from outside (ab extra). In fact, those who share the same Baptism with us, as well as the followers of other Religions and all people of good will, can find herein fruitful occasions for reflection and a common motivation for the integral development of every person and the whole person."

Those just looking for basic principles of Catholic social thought can find them laid out with clarity and brevity at a site developed by the Catholic Charities of the Archdiocese of Milwaukee. Its title says it all: Seven Principles of Catholic Social Teaching. Short and sweet.

A very bare-bones yet comprehensive source for the actual social teaching documents is also available. Those who want something more detailed, without the distraction of added personal colour commentary, can find it at a site run by the Office for Social Justice St. Paul and Minneapolis. It lays out principles but also gives the autonomy to link to quotes from the documents themselves.

For a more "directed" (read: ideological) take on Church social documents, the Catholic Labor Network is an interesting place to consider the relationship between work and faith, but it must be balanced by going directly to the site for Pope Benedict's encyclicals.

Indeed, the best introduction of all to Catholic social thinking is to start with Benedict's majestic 2009 encyclical Charity in Truth, jump all the way back to Leo XIII's Rerum Novarum, then pick and choose the gaps that need to be filled.