This study by James Eglinton represents a significant advance in Bavinck scholarship, a breakthrough that has important ramifications for those of us who find in neocalvinism a rich resource for our social-ethical vision. 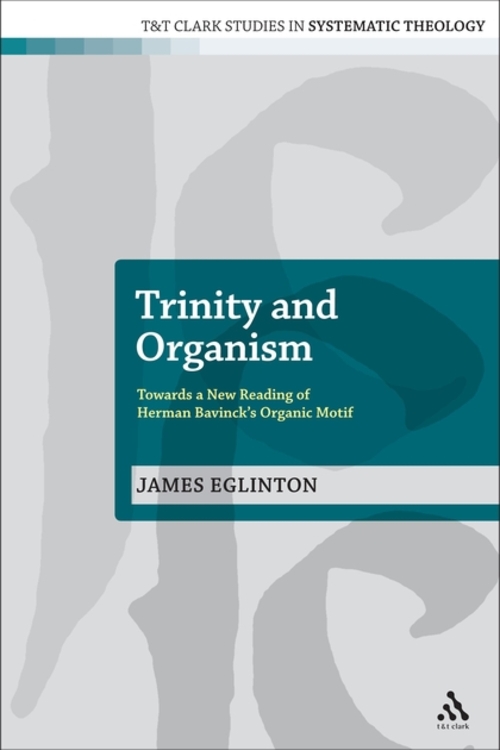 Along with Abraham Kuyper, Herman Bavinck (1854-1921) was one of the two major architects of a Reformed revival in The Netherlands in the late nineteenth century, a revival commonly known as neocalvinism. Though generally less well-known and less studied than his politically more famous fellow Dutchmen, Bavinck has, in the last several years, also received a significant amount of attention by a new and younger generation of scholars in North America as well as in Great Britain and Continental Europe. This study by James Eglinton, a revision of the author's doctoral dissertation at New College, University of Edinburgh, represents a significant advance in Bavinck scholarship, a breakthrough that has important ramifications for those of us who find in neocalvinism a rich resource for our social-ethical vision.

The notion of the "organic" plays a major role in the theology of neocalvinism, affecting the thought of both Kuyper and Bavinck, influencing their understanding of the Holy Trinity, Scripture's inspiration, Christology, ecclesiology (the institute versus organism distinction), and the normative working of human society. Until recently, scholars attributed the source of this organicism in neocalvinism to nineteenth-century movements, notably Romanticism and Idealism, with a longer pedigree going back to Aristotle. As Eglinton notes, the assumption here was that "one should define a term in relation to its etymological and conceptual history, rather than seek definition by its immediate contextual usage" (that is, the author's usage). In Bavinck's case (as well as in Kuyper's), there was an assumption by later interpreters that placed neocalvinist organicism within a semi-mystical tradition that includes Jacob Böhme and judges it to be "reminiscent of the Zeitgeist of Neo-Idealism."

Eglinton does two things that effectively discredit this portrait. First, he carefully makes use of more recent historiography that "demonstrates the failure of generic historical definitions of organicism" and insists on locating an author's meaning in the immediate context of his own writing rather than through etymology and word usage. Utilizing the recent work of another younger scholar, Brian Mattson (Restored to our Destiny: Eschatology & the Image of God in Herman Bavinck's Reformed Dogmatics, 2012), Eglinton refers here to the work done by biblical scholar James Barr (The Semantics of Biblical Language, 1961) and calls for a "substantial revision" of the way Bavinck has been interpreted. Secondly, he actually does the careful contextual-exegetical work on Bavinck's major texts, especially the Reformed Dogmatics and The Philosophy of Revelation. From this, Eglinton concludes that Bavinck's use of the organic motif arises from and expresses his "trinitarian appropriation of reality."

This conclusion not only links Bavinck's organicism to the longer Reformed theological tradition beginning with Calvin, but also to the broader Christian tradition, especially to Augustine. Eglinton effectively demonstrates that Bavinck's understanding of the organic is of one piece with his orthodox trinitarian theology. The notion of the organic is subservient to and flows from the trinitarian foundation, not the other way around. For readers of this journal, however, is there a payoff beyond the purely scholarly discussion that might seem more appropriate to a strictly theological journal? Indeed there is, and what it is will become apparent when we look more closely at the "debate about Bavinck" that serves as Eglinton's point of entry for his research.

Ever since scholarly interest in Bavinck was revived by the pioneering work of Eugene Heideman and Jan Veenhof a generation ago, there has been talk of "two Bavincks": a traditional, even pietist, Reformed believer, and a modern man. Locating the source of Bavinck's organicism in his orientation to modern, nineteenth-century thought divorced it from the classic theological system of Reformed thought. Similar moves, now in reverse, distinguishing a solid biblical component from alien philosophical aspects of his thought, are also frequently applied to Kuyper. Eglinton's careful research and persuasive argument casts this entire enterprise into serious doubt. And that has two major implications for the kind of critical socio-cultural analysis that Cardus seeks to do: a negative cautionary warning and a positive constructive tool for analysis.

First, the caution. Neocalvinist socio-cultural analysis is particularly prone to committing the genetic and etymological fallacy in the realm of ideas. Ideas are our stock-in-trade and we are pretty good at tracing them from age to age, person to person, and group to group, making associations with ease and using those associations to generate critical judgments. Thus, to identify a person's thought as "neo-Platonic" or "Thomist" or "Kantian" or "scholastic" is often all that is needed to condemn it. What Eglinton accomplished in effectively demolishing a long-held judgment about Bavinck's thought and completely revising it stands as a caution to all who are inclined to finding "false" elements in a great thinker's work and then setting his "genuine" insights at odds with these false elements. A closer look often reveals that there is a fundamental unity of thought which the interpreter missed and that the fault is with the presupposition of the interpreter who failed to find it. In the case of Bavinck's (and Kuyper's) use of the organic motif, a predisposition of suspicion about the theological tradition of Reformed orthodoxy resulted in a failure to see the unity arising out of Bavinck's classic trinitarian epistemology and ontology.

That brings me directly to the constructive lesson to be learned from Eglinton's work. The most significant appropriation of Bavinck's thought for North American neocalvinism has been the theme-called the fundamental theme in Bavinck's thought by both Heideman and Veenhof-that "grace restores nature." According to Eglinton, this is true with respect to the relation between creation and eschaton, but "grace restores nature" must not "become elevated beyond the Trinity itself. The Triune God is the literal centrepiece of Bavinck's theology." He then cites another Bavinck scholar: "The Trinity is the heart of the Reformed vision and 'grace restores nature' is subordinate to it."

Historically, Reformed thought has always sought to be properly theocentric, and making "grace restores nature" the core of one's theological vision leads one away from thinking about all reality from a trinitarian, theocentric perspective. Instead, following the lead of the social gospel, the flow of human history as the arena for God's kingdom-building often becomes central and language of "following God's mission" becomes prominent. In that context, seeing the helpful organic thinking of neocalvinism as the fruit of trinitarian theology opens up possibilities for linking contemporary socio-cultural analysis to the classic trinitarian theology of Reformed orthodoxy. This is an opening that neocalvinism has not only failed to use but in fact actively resisted. The result has been tragic in my view: neocalvinism in North America has all too often been alienated from the very church that gave it its life. It is my own firm conviction that Bavinck shows us a better way, and James Eglinton's revisionist interpretation shows us the proper way of following Bavinck's lead.

Finally, I cannot fail to call attention to the fact that the two most important dissertations in terms of revising Bavinck scholarship in recent years did not come from within the Dutch Reformed, neocalvinist worlds of The Netherlands or North America or even South Africa, but from Scotland. I have already noted that Eglinton did his work at the University of Edinburgh; Brian Mattson did his at the University of Aberdeen. For a native-born Dutchman and neocalvinist like this reviewer, that is supremely gratifying. I'm also quite confident that Bavinck, fond as he was of the seventeenth-century, University of Edinburgh-trained Erskine brothers (Ralph and Ebenezer), who like him seceded from their respective national churches, would heartily approve.