While it is indeed more than worthwhile to mine the riches of faith that we have because of Abraham's obedience to God, I have a different Abraham in mind: Abraham Kuyper. I mean no blasphemy by labelling Kuyper in a manner similar to the father of the faith, and it is true that his aim of making a place in Dutch society for the kleine luyden (the little people) made him more like a Moses figure. 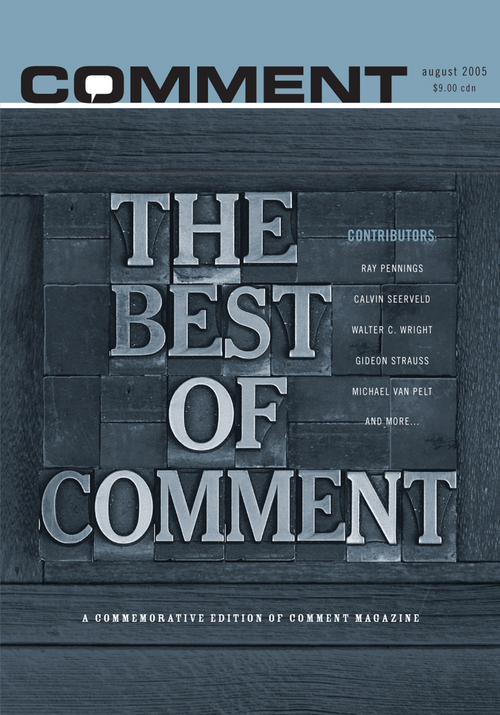 It's entirely possible that someone would look at the title of this column and think, "Is this a discussion of the many benefits of the Abrahamic covenant?" While it is indeed more than worthwhile to mine the riches of faith that we have because of Abraham's obedience to God, I have a different Abraham in mind: Abraham Kuyper. I mean no blasphemy by labelling Kuyper in a manner similar to the father of the faith, and it is true that his aim of making a place in Dutch society for the kleine luyden (the little people) made him more like a Moses figure.

Nevertheless, from the well of Kuyper and his work has sprung a tradition in and beyond the Netherlands, Canada, and the United States that bears his practical and ideological DNA, even as his "progeny" attempts to improve upon and develop his legacy. With this legacy in mind, there are two gifts I have received from Kuyper that I'd like to mention.

The first gift I received came in the early 1990s when I first read Kuyper's six lectures on Calvinism that he gave at Princeton Seminary in 1898. Anyone who wants a good picture of Kuyper's overall project in one volume will find it here. In reading the first lecture, which presents Calvinism as a "life system," I came across language describing the results of common grace that I found absolutely liberating, which I quote at length:

Thus the church receded in order to be neither more or less than the congregation of believers, and in every department the life of the world was not emancipated from God, but from the dominion of the Church. Thus domestic life regained its independence, trade and commerce realized their strength in liberty, art and science were set free from every ecclesiastical bond and restored to their own inspirations, and man began to understand the subjection of all nature with its hidden forces and treasures to himself as a holy duty, imposed upon him by the original ordinances of Paradise: "Have dominion over them." Henceforth the curse should no longer rest upon the world itself, but upon that which is sinful in it, and instead of monastic flight from the world the duty is now emphasized of serving God in the world, in every position in life.

It is no overstatement to say that when I read these words and others in Kuyper's lectures, it was as if an oxygen mask had been given to one who had long gasped for breath. You must understand that for years prior I needed direly a form of theological respiration that would bring life to my desire to be a Christian who affirmed and engaged culture. In my spiritual development, especially in college and the three years prior to seminary, I was living in a Christian world where affirmation of secular life only came if there were some kind of evangelistic payoff.

The way to understand your involvement as a Christian in various professions, political life, or secular art and music was to seek some way to be a witness in the sinful world. There was minimal significance given to the glorification of God in the actual performance of worldly tasks, apart from making sure that one is ethically upright. In this environment, I longed for a way to theologically support my view that it was perfectly fine as a Christian to be affirming of cultural engagement, and when I read Kuyper for the first time, I was given the gift of a theological breath; I finally had found a comprehensive and culturally engaged Christianity.

The second gift also came as I read Kuyper's lectures that first time. As I came near the end of the final lecture with about seven pages to go, I read the words that changed my thinking forever:

To put it concretely, if you were a plant you would rather be rose than mushroom; if insect, butterfly rather than spider; if bird, eagle rather than owl; if a higher vertebrate, lion rather than hyena; and again, being man, rich rather than poor, talented rather than dullminded, of the Aryan race rather than Hottentot or Kaffer.

When I read that last phrase, I, as an African-American, sat dumbfounded and put the book down on the desk before me. Here I was, almost at the end, and I had dismissed Kuyper's comments about Ham's progeny in the first chapter as a typical though vastly false interpretation of Genesis and a myopic view of African history. But now, I was faced with a comment that struck me as racist, regardless of its use in his argument, and I didn't know what to do, because I could not dismiss it as mere ignorance.

You have to understand here that I was totally on board with Kuyper's program by this point, and I was relishing finding out all I could about his thought because of my excitement surrounding the first gift mentioned above. Now what?

Central to my difficulty was my zero-sum thinking when it came to dealing with figures. To that point, I approached figures as either wholly good or bad, often on the recommendation of others. Now I was faced with a situation where there was so much upside with Kuyper, yet a disappointing and devastating downside revealed near the end of the book.

I admit I heard voices in my head that completely dismissed Kuyper because of his views on race, but I wanted to find another way out of the dilemma.

Then, the second gift came: critical thinking. This wrenching experience pushed me to become a thinker who looks at figures and movements and then draws from them what is good while acknowledging imperfections. I acquired nuance.

This shift in thinking enabled me to pick up the book and continue to the end and to remain excited about Kuyper's legacy while lamenting my discovery of his clay feet. Of course, the fact is that no figure apart from Jesus Christ is going to really be completely satisfactory to any of us, if we are honest, but there are many people who are more comfortable living in a zero-sum universe that lacks nuance, rather than facing the potential distress of critically engaging figures and movements. Since that day, I have been no longer a resident of that universe, thanks to this wrenching encounter.

In the years since I received these two gifts from Father Abraham, I have sought to become a gift-giver myself. My aim and desire is to take Kuyper's legacy and pass it on to others, especially certain others that Kuyper may have never had in mind while he constructed his public theology.

As with all who are stewards of legacies, I want to be faithful to what has preceded me, but I also want to make this public theology my own, which requires reworking and refining what Kuyper left us. I call this my neo-Kuyperian project. I hope many will accept it as my gift to them in years to come.

For the next generation of Christian writers of literature