How Heraclitus taught me to read

His writings are fragments—like shards of pottery, or dinosaur bones. And they are a test of who can read best. Heraclitus will elude us until we get the crucial point. Matt Colvin holds a PhD in Classics from Cornell University and teaches classical languages and humanities a Mars Hill Academy.
by Matt Colvin

I had penetrated the inner sanctum. Although I was only a sophomore at the University of Maryland, fresh out of Greek grammar, there I was, one of three students seated on a comfortable couch in a posh office in the Classics department with a book open on my lap and a small copy of Liddell & Scott Greek-English lexicon tucked under it. The office was lit by torchiere lamps; there were no windows. Across from us was one of the university's most senior professors. He wasn't being paid for this. He was an assistant to the president of the university, and a world-famous authority on the presocratic philosophers. But today, he was a mystagogue, ushering us into the presence of the ancient Greek philosopher Heraclitus. I was there to learn how to read.

When I mention ancient Greek philosophy, you probably think of Aristotle's treatises or Plato's dialogues. Their prose is continuous: Aristotle describes his topic, dices it up precisely, and tells us what he thinks. Plato is a little more coy, using discussions among his characters to explore philosophical questions, but he is still writing continuous prose, so that a given dialogue is a self-contained unit: it has a title, a beginning, middle, and end. But reading Heraclitus is not like reading Plato or Aristotle. His writings are "fragments." If that makes you think of shards of pottery, or dinosaur bones, you're on the right track. We are told that he presented "his book" as a votive offering in the temple of Artemis at Ephesus, the same shrine that caused so much mindless shouting when Paul showed up to preach the gospel in Acts 19. But unless a new papyrus turns up in the dustbins of Egypt, Heraclitus's book will have to remain in a state resembling Humpty Dumpty: it exists only in little bits quoted in the writings of others. Like archaeological remains, they are buried in strata: for instance, Heraclitus's famous saying about the river, Eusebius the church historian (4th c. AD) quotes the Alexandrian philosopher Arius Didymus (1st c. BC), who quotes the Stoic Cleanthes (2nd c. BC), who quotes Heraclitus (6th c. BC). There are no quotation marks, so it isn't always clear which author wrote what.

Today you can buy books that present you with "the text" of Heraclitus's fragments: just what he wrote, no words of Aristotle or the Stoics or the church fathers officiously intruding. How did this happen? In 1879, a German graduate student named Herman Diels presented the world with a 400-page dissertation written in Latin, entitled Doxographi Graeci: "The Greek Doxographers." His goal was to distill the ipsissima verba—the very words—of the presocratics, separating them from the "doxographers," whom he calls "peddlers of opinions" who "muddy the water" by "adulterating the pure flow" of doctrines from the ancient sources. Like a textual critic, Diels arranged his authors in a genealogical stemma, tracing everything back to a source-book, a sort of Bartlett's Quotations of philosophy, ostensibly assembled by Aristotle's student Theophrastus. Then Diels himself followed suit: his next work was itself a sourcebook, Die Fragmente der Vorsokratiker, in which he presented all the evidence for Xenophanes, Parmenides, Heraclitus, and the rest, sorting it into the quotations that he thought were exact ("B fragments"), and those that were merely reminiscences or paraphrases ("A fragments"). Like other textual technologies—computer-searchable optical discs, concordances, biblical chapter and verse divisions, page numbers, or even the codex form itself—Diels's collection changed the way the text was read. No longer was it necessary for scholars to read Heraclitus by reading Plato or Eusebius or any of the other authors who quote him. His fragments now have an independent existence of their own—an existence that they did not have when he wrote them, and that they did not have in the authors who quote them. It is now possible to talk about "fragment 10," just as one can wave a sign advertising "John 3:16" at a football game.

Such neatly numbered fragments belie the fact that we cannot know where Heraclitus's words begin and end without considering the aims of the authors who quote him. His most famous saying, "Upon those who step into the same rivers, different and still different waters flow" is followed by the words, "and souls are exhaled from moist things," without any intervening punctuation. Which words are his? The problem cannot be solved until one realizes that the sentence about souls is a doctrine of the Stoics, and that the passage is comparing Heraclitus to Zeno, the founder of Stoicism. The bit about souls is Zeno's; the bit about the river, Heraclitus's—otherwise, there is no comparison, and the point of the passage is lost. The authors who quote the Presocratic philosophers are always engaged in writing philosophy of their own. If we are to get at Heraclitus honestly, we must deal with him as he comes to us, enmeshed in the writings of other authors who use him for their own ends. Rather than trying to pare away the texts that surround the fragments like so much rind or husk, scholars are now publishing studies that attempt to understand how later writers understood and used the presocratics.

Once you've figured out which words were actually written by Heraclitus, it's time to see how they fit together. Unlike some presocratics, who wrote in dactylic hexameter verse, Heraclitus wrote in prose—artful, carefully crafted prose. He describes the Delphic oracle in terms equally applicable to himself: "He does not explain, nor does he conceal, but he indicates." Plato says that Heraclitus "shoots little enigmatic phrases that are filled with strange turns of language." He won't stand still and answer our questions. He won't debate. He isn't going to pop his head up from the ground like Plato's Protagoras, and tell us we've misunderstood him. If we want his meaning, we will have to figure it out. Squint, ponder, try out different options. Ransack the lexicon. Try to think of parallel texts in other writers. Heraclitus demands it of you: "An unapparent connection is better than an apparent one."

When we try this approach on the river saying, we find that the cocktail party version of Heraclitus as the advocate of total and ceaseless flux is actually mistaken. The river is emphatically the same; only its waters are different. Studying our Greek verbs, we find that the participle "stepping" could be understood as cursive ("those who are in the process of stepping"), or as iterative ("those who step several times"). The meaning of the saying changes completely depending on how we read that verb. On one reading, I step into a river, and as I step, different waters flow upon me, even though the river is the same: a vivid illustration of the equal ultimacy of chance and sameness, one and many. On the other reading, I step into the river once, and then step again into a different river, so that Heraclitus subverts sameness with change, and collapses oneness into "manyness."

The Greek supports the first reading of the river fragment. But when all the grunt work is done, we may still be in doubt, for Heraclitus is a master of studied ambiguity. Even the very first sentence of his book could read two ways: "Though this Logos is always men are uncomprehending..." Well, which is it? "Though this Logos is always"? Or "always men are uncomprehending"? Even Aristotle said he didn't know which reading was right.

Because Heraclitus uses imagery, his utterances can still work upon us very much as they did upon the ancient Greeks. He can sound like an eastern mystic: "It is wise to agree that all things are one." Or an irate film critic: "Homer deserves to be kicked out of the rhapsodic contests and bastinadoed." In every case, his words are crafted to grab our attention and stimulate thought: we can scarcely squeeze them too hard.

In the Hellenistic period, there was fierce competition among philosophers and grammarians to interpret Heraclitus's book. The Stoics and Skeptics wrote commentaries on him. It's clear why they did so: Heraclitus's words are a test of who can read best. They will elude us until we get the crucial point that determined his diction, and then suddenly all the words will slide into place and the entire utterance will ring.

Heraclitus taught me these lessons, but they apply beyond his fragments. When I read Paul's letters, or the narratives of the gospels and Acts, I now ask myself: Do those italicized words in my English Bible belong there? Or are they changing the meaning? Is "spiritual body" really the right translation of soma psychikon (1 Corinthians 15:44)? Am I wrongly trusting the red letters (another technology) to tell me when Jesus is talking? Is that really Paul's argument, or just the translator's? What does Jesus mean by this utterance? Does it ring true, or have I not got it yet?

Every fragment . . . every word matters. 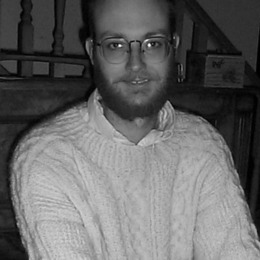 Matt Colvin holds a Ph.D. in Classics from Cornell University and teaches classical languages and humanities at Mars Hill Academy. He has driven a 65-ton quarry truck, and published articles on Heraclitus in Oxford Studies in Ancient Philosophy and The Classical Quarterly. He lives in Mason, OH with his wife and six children.

On the genius of the OED, and other idiosyncrasies of everyday English.

A remarkable portrait of one of the ugliest, most universal human phenomena: self-absorption.