New abolitionists always tell me they want to do something real. They want to get their hands dirty—but, I often find, not too dirty.

"Trafficking is the crime du jour," the ICE Agent declared, slapping her hand against the steering wheel. I nodded from the passenger's side, careful to say nothing, the eerie, sunrise-and-neon glow of the New Jersey Turnpike shuttering past. "It's important, definitely, but it's just the pretty thing getting all the attention. Hype happens. It will pass."

On this fall morning a couple of years ago, I was riding shotgun from Washington, D.C., to post-human trafficking raid proceedings in southern New Jersey. As a U.S. Department of Health and Human Services colleague dozed in the backseat of the car, our pilot, a grizzled Mama Bear of an Immigration and Customs Enforcement (ICE) official, barrelled down the lonely interstate.

We all knew law enforcement was wary of allowing federal social services staff to join post-raid victim interviews, and the Mama Bear wasn't going to let our last-minute invitation go to our heads. Jack Johnson blaring on the stereo, she piloted her sedan with speed and proclaimed what she really thought of the federal government's anti-trafficking public awareness crusade, of which our agency was a prime sponsor.

An hour after daylight, we pulled off the turnpike at a nondescript Courtyard Marriott, where a Pia Zadora-esque social worker, her sidekick nun, a troop of state and federal law enforcement agents, and several girls from Togo awaited our arrival.

The newspaper report on that morning's New Jersey hair-braiding shop bust remembers a total of twenty girls trafficked from rural West Africa to a life of first-world squalor and forced labour. I know that the hand-drawn grid tacked to the wall of ICE's operational nerve centre—a dishevelled suite half-way down the hotel's top floor—held at least that many names.

The grid itself was just a sheet of newsprint, six feet tall and scrawled with notes on the puzzle of each girl's age, nicknames, and family relations. It would decide which of the Togo girls would be sent together to their social services placements, and which would go alone. Several of the girls were children, and they would be paired according to familial ties and taken into the care of the Unaccompanied Refugee Minors program, a foster care system administered by the U.S. Department of Health and Human Services.

It was a strange day, with business and guns and badges circumscribing the fate of the Togo girls who, in the coming months, would gather with their traffickers' lawyer for a press interview in which they argued that endless weeks of never-paid salon work had been their thanksgiving to the "father" and "mommy" who saved them from their impoverished villages.

But on that day, they were victims.

I spent most of the day with the youngest Togo girl, who was seven or eight years old, our pants rolled up and our feet dangling into the shallow end of the hotel's in-door pool. She finished her interview early that morning, and after learning that the hotel had a pool, she begged to play in the water. No one knew if she could swim, so a foot soak seemed safest.

"Will you be my mother?" she asked me, my colleague, and each of the female ICE agents who joined us in the hot poolroom, its windows clouded with acrid, steamy air.

I was working a couple of the Togo girls' cases, so their paperwork and press coverage followed me back to my office cubicle in Washington, D.C. As the ICE agents' hand-drawn grid dictated, the girls had been scattered all around the country—some together and some alone. I learned that one of them had been provided her own apartment in a city not far from D.C. The luxury seemed almost cruel in its isolation. I imagined what might happen if I found her, befriended her. I wondered how long it would take her to run back to the family, however abusive, she had known in New Jersey.

I often think of that day with the Togo girls when friends or colleagues or newly minted abolitionists ask me what they can do to fight human trafficking and modern day slavery. The more grizzled I get, the more I sympathize with the Mama Bear ICE agent, and the more often grassroots enthusiasm variously strikes me as foolish or freeing. Some days, I cringe at that fire-in-the-belly, forgetting it first led me to this career. Other days, I'm grateful for the groundswell.

What always surprises me is the crush of people who feel called to tackle the issue but get stalled, almost stunned, in a push for the kind of public awareness, posters, concerts, and parades at which the Mama Bear ICE agent scoffed. New abolitionists always tell me they want to do something real. They want to get their hands dirty—but, I often find, not too dirty.

It is a peculiar disappointment to watch their faces deflate when I suggest that what would really help human trafficking survivors are loving foster parents, faithful friends, and honest employers who offer good wages and health insurance. Unfortunately, nobody gets paid very well for any of that work. Nobody gets famous for it, either.

But after watching myself and so many other people blunder through friendships with human trafficking survivors, I'm fairly convinced that what survivors need—whether they are pimped-out runaways or Filipino hotel workers abused at a South Dakota Comfort Inn—is faithful, healing families and friendships, in which we offer the kind of love we are able to give only when we confront the issues of integrity and addiction that plague our private hearts.

Only then do we begin to understand the intuitive, even personal link between pornography and sex trafficking, or the thin line between rage and exploitation, or how thoughtlessly patronizing everyday machines of consumerism and cheap food keeps labour trafficking alive. If we see ourselves more clearly, we are able to see human trafficking survivors more clearly, too, and to accept them not as victims or foreigners or trophy, token friends, but as human beings who long to meet Christ in the integrity of lives lived with joy, and in the interplay of forgiveness.

We become bored by the bald marketeering of rallies and concerts that are more navel-gazing than galvanizing. We are ready to lay down our appetites, to know that justice begins in patience and freedom in kindness, and that healing—our own and everybody else's—is a long, hard, good road. 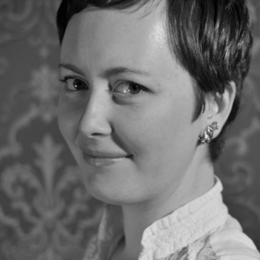 Laura Bramon Good lives in Washington, DC, where she works on human trafficking issues for international relief and development agencies. She received an MA from the Johns Hopkins University Writing Seminars and served as the 2005 Milton Center Fellow at Image. Her fiction and nonfiction has appeared in The Best Creative Non-Fiction, Vol. 3 (W.W. Norton), Image, Books & Culture, Featherproof Press, and the Image Good Letters blog.