Twenty-third in an expert series on must-read books. 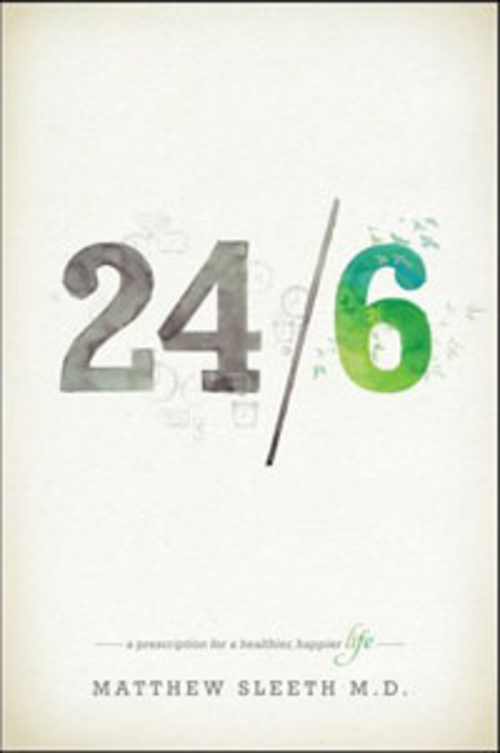 24/6: A Prescription for a Healthier, Happier Life by Matthew Sleeth (Tyndale, 2012)

First, I must note that this is a great book title, clever and yet clear, even compelling. Who hasn't fretted over the pace of our 24/7 culture—the need to be "on" nearly around the clock, seven days a week? Secondly, the subtitle is appropriate because Sleeth is, in fact, a medical doctor. He has written elsewhere (starting with Serve God, Save the Planet) how he felt called to speak out about the dangerous health effects of our polluting ways; we could, he believed, prevent much ill health if we practiced more sustainable environmental habits. It turns out (surprise, surprise) that our frenetic pace of life is also toxic. As a family doc with an eye to preventative measures, he has work cut out for him.

And so, the "prescription" for great health in the subtitle isn't mere metaphor. Sleeth shows that our tendencies to ignore God's Sabbath commands are detrimental not only to our faith, but to our bodies and our culture. Indeed, as others have shown, the lack of weekly rest, the chronic lack of sleep, and the constant multi-tasking do not lead to a happy life.

But what to do? 24/6 is not a list of simple lifestyle suggestions and it offers no particular formula for strict sabbatarianism. But it is a wonderful invitation to live out Sabbath principles, realizing that God intended days and seasons of rest for his glory and our good. As Eugene Peterson puts it in a fine forward, "Under Dr. Sleeth's pen, Sabbath, a dead word for so many, undergoes a resurrection, comes alive—not as a bare commandment, the fourth in a sequence of ten, but as a vigorous way to live in the present. This takes place in a freshly imagined (but not fanciful) recovery of the salvation and Jesus—context of Scriptures. The writer's mastery of the entire Biblical revelation raises Sabbath keeping far above an unadorned rule to be kept."

There is much for which to commend this book and the placing of Sabbath practices within the broader narrative of Scripture is a significant feature. It is also a plus that it is a book which is easy to read, interesting, and practical. I love this sweet blend of theological depth and down-to-earth common sense, of spirituality and practicality. That Sleeth writes as a Bible scholar, a medical doctor and an environmental activist (he directs Blessed Earth which focuses on Christ-centred creation care) makes this especially appealing.

Chapter titles such as "Another Brick in the Wall," "It's About Time," "Maggots in the Manna," and "The Sermon on the Amount" show his playfully colourful style. The penultimate chapter, "Let the Celebration Begin," shows his hand: attending to Sabbath is not drudgery and it isn't primarily pragmatic or medicinal. This is life as it was meant to be, multi-dimensional, full of joy and full of energetic shalom, creating space for God, honouring the limits and contours of creation. Sleeth and his wife (whose recent book Almost Amish is loaded with practical ideas about going green) are the sorts of folks you would enjoy knowing. Their walk of faith is admirable. They are wise. This new book is important, and not just because it is clever and timely. Eugene Peterson says it is "without peer." Ignore it at your own peril.

One of the things that distinguishes Comment, or so it seems to me, is its willingness to entertain and promote visions of the better ways to organize our communal lives, ways that are not obviously beholden to any of the current ideologies in play in twenty-first century social theory. That is, it seems not to be a liberal or conservative journal, really, but somehow something other. Writers for it, and thinkers for its hosting think tank, Cardus, are surprisingly fresh, drawing on insights from across the sociopolitical spectrum (and, often, constructively critical of them all as well).

Of course, the people at Comment are not the only public intellectuals who are seeking a non-aligned, "third way." One of the great voices of such an alternative worldview, a public intellectual of the highest sort, was the late social critic Christopher Lasch. Eric Miller, a professor of American history at Geneva College in Beaver Falls, Pennsylvania, is the author of the definitive book on Lasch (Hope in Scattering Time) and stands, himself, in the line of the non-aligned Mr. Lasch.

The essays here are a delightful hodgepodge with Miller eloquently sharing insights on a wide variety of topics. Many are nearly memoir pieces, most about what we might call "ordinary life." Especially if you are living your ordinary life in Western Pennsylvania, where talk about baseball, football, and hockey is necessarily a religious matter. The essays here are gathered under the headings Earth, Politics, Education, Sport, and Faith. He mentions his upbringing in Brazil with missionary parents, tells about Native American football player Knute Rockne, offers great ideas about local politics, and is often very, very touching (as in a chapter about "Vacationing with Pagans"). One clever piece is written about higher education in the voice of Screwtape (who goes after "Know-Nothing Epistemology"). One is about his discovery of the late (great) singer-songwriter Mark Heard. And several are about virtue, about Pennsylvania patriotism, about home. Often, one way or another, about home.

It is a shame, I think, that some serious readers tend to dismiss the short essay genre; it has so much to commend it. If one wants great writing, provocative scholarship, moving prose, good wisdom, and perhaps don't have large amounts of time, these thoughtful but relatively short pieces are wonderful. They hold together wonderfully, in voice and theme, and that they first appeared in places as diverse as Christianity Today and The New Pantagruel, First Things and The Philadelphia Inquirer, makes them that much more interesting. Miller's heartbreakingly beautiful last chapter, "Epiphanies of Gratitude" may be about learning to trust God, by way of planting a garden, coming to realize that all of life is a gift. But it could also describe how many of us feel for Miller's good work, and for the grace-filled gift that is this very fine book.

Borrow and buy, hold and ponder

Seventh in an expert series on must-read books.