Managing beyond our time

"We have too much to live with and too little to live for," writes Os Guinness. And it's true that more and more, leaders in business and in broader culture have no end beyond their own satisfaction, their own short-term gain at long-term expense. The next generation of Christian cultural leaders needs to look beyond today's circumstances, and learn stewardship for tomorrow. 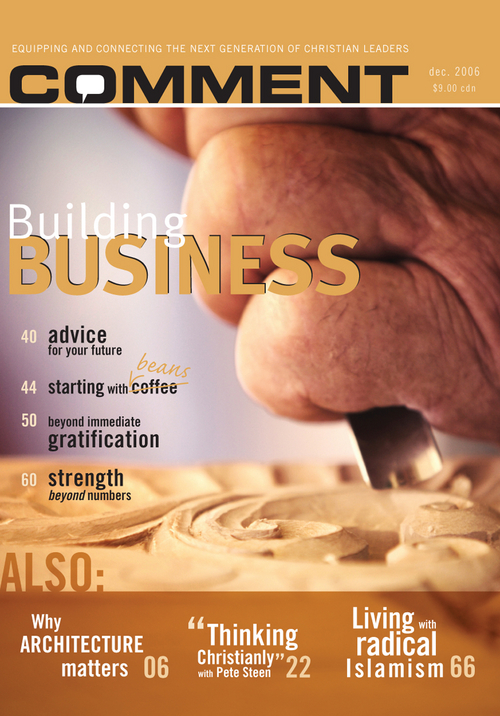 In a culture bent on pursuing its own immediate gratification, the next generation of Christian business leaders has its work cut out.

The pressure to think and act on short term results is stronger than ever before. In a culture of disbelief, the less we corporately hold on to, the more we look out only for ourselves. But you, the readers, will need to understand and lead from a sense of meaning and purpose beyond yourselves and your own generation. You must commit to managing for the long term, and making intergenerational investments.

Short-termism is the pursuit of immediate gratification at the expense of long-term thinking. Consider the following reports from the business sphere:

These results confirm what we already know: that short-termism is a major challenge to corporate integrity, risking economic decay and self-destruction. Some examples of how short-termism might play out include:

While management's number-one objective should be the creation of long-term shareholder value, it is increasingly obvious that some managers aim only for short-term earning expectations or, worse, for short-term personal gain at the expense of other stakeholders.

Short-termism should not be confused with the notion of responding quickly to new market information. Such quick responses are critical for the survival of businesses and for market efficiency. When we use the term short-termism, we are referring to what the CFA Institute identifies as

the excessive focus of some corporate leaders, investors, and analysts on short-term, quarterly earnings and a lack of attention to strategy, fundamentals, and conventional approaches to long-term value creation. An excessive short-term focus combined with insufficient regard for long-term strategy can tip the balance in value-destructive ways for market participants, undermine the market's credibility, and discourage long-term value creation and investment. Such short-term strategies are often based on accounting-driven metrics that are not fully reflective of the complexities of corporate management and investment.

The end of long-term context

Over the past several decades the preoccupation with short-term results over long-term impact seems to have intensified. We can see it in the capital markets, and we can see it in other areas of social life as well. Anyone who has followed the debates on family, education, government social and fiscal policy can draw the conclusion that short-termism" has seeped into all aspects of our culture. What is going on? Why have we become so short-sighted? Do we not know that good decisions require a long-term context? Is it because we simply do not care about the long-term anymore? Have we adopted economist John Maynard Keynes's tongue-in-cheek view, "in the long-run we are all dead"?

Our culture's short-termism should not come as a surprise to us. Just take the fact—reported by John Stapleford in a study of "Christian Ethics and the Teaching of Introductory Economics"—that nearly one million introductory economics textbooks are sold annually in the U.S., and all the best-selling texts claim to be value-free, merely presenting an intellectual framework that describes how self-interested economic agents act completely apart from any normative ethics or moral authority. Do we actually believe that economics is value-free, and that individuals are free to act as autonomous, self-interested, economic agents? If we do, why are we surprised when some managers of businesses and financial assets act in total self-interest, subordinating the needs of other participants and institutions to their own?

Let's go further and ask another question. Should we expect people to think long-term and make self-sacrificing, truly intergenerational decisions when in both the moral and philosophical realms there is very little consensus left in Western countries over the proper foundation for moral behaviour, moral authority, our theory of knowledge, and, ultimately, one's purpose for even existing? We live in a culture that has the audacity to tell us that truth does not even exist (despite the self-refuting nature of that statement), and that if truth did exist we could never know it anyway. Some refer to this as postmodernism. It is important to point out that although the nature of truth has been debated throughout the centuries, postmodernism has turned this debate on its head. While most arguments throughout history have focused on rival claims to truth, postmodernism rejects the very notion of truth as fixed, universal, objective, or absolute. As a result, we find ourselves in the midst of a culture without moral authority, or as legal scholar Stephen Carter calls it, a "culture of disbelief."

But as many astute thinkers and observers of history have pointed out, a culture that does not and cannot make moral judgements, and has jettisoned both its willingness to discern truth and its agreed answer to the question of the purpose of life, is surely living under the shadow of nihilism. There is no ultimate meaning, and ultimate reality (i.e. moral standards) is nothing more than what individuals determine it to be!

Has this become the ultimate foundation for our short-termism? I believe so! And I am not alone. In his 2005 book, The Cube and the Cathedral, George Weigel indirectly quotes Christopher Dawson and summarizes the issue in bold terms: "A secular society that has no end beyond its own satisfaction is a monstrosity—a cancerous growth which will ultimately destroy itself." Os Guinness underscores the foregoing when he writes in Entrepreneurs of Life, "the trouble is that, as modern people, we have too much to live with and too little to live for. For most of us, in the midst of material plenty, we have spiritual poverty."

What's in it for me?

Let me ask one more question which deals with the same issue. Why are we surprised by our short-termism when we are surrounded by an instant credit, mass consumption culture in which delayed gratification is ridiculed and mocked as outdated and irrelevant? Our mass media demonstrates this with their hackneyed slogans such as "What happens in Vegas stays in Vegas" and "Just Do It." Given that we (and our children) are inundated with such self-gratifying babble, why should we be surprised that, individuals, families, businesses, and governments find it hard to make long-term, intergenerational decisions? When the highest ideals we have are personal peace and prosperity, as Francis Schaeffer identifies, why should individuals make long-term sacrifices?

We need a sense of meaning and purpose beyond ourselves and the current generation. We must be rooted in that which is above the physical, and ultimately must find rest in our personal Creator. A "faithless" or disbelieving culture will over time become increasingly short-term in its views, attitudes, and actions, since the most important question eventually becomes: What's in it for me? Or, as the apostle Paul's quoting from the Old Testament prophet Isaiah so eloquently summarized secular thinking, "Let us eat and drink, for tomorrow we die."

Unfortunately, the effects of short-termism are alive and well within parts of the corporate world. While there is a large number of business people who do view themselves as long-term stewards of the next generation's wealth, the pressure to think and act based on short-term results has increased. I challenge young entrepreneurs to view your gifts and positions as callings, and to look beyond your own short-term circumstances. I encourage you as young business people to use your God-given talents and resources to be fruitful and bring added value into the world, so that you leave behind a lasting and valuable legacy.

Here are some of the issues which reflect a short-term preoccupation in our corporate board rooms, and which will demand critical thinking and fresh approaches from the next generation:

Each one of these areas is worthy of our attention for further research and work in order to help shape public policy and apply pressure on corporate boards—or to act in the future as members of boards. We must learn to protect the long-term interests of all of the business sphere's long-term stakeholders.

The Culture of Business

How will we respond to the ever-stronger pushes to envy, to discontent, to growth, to newness, to debt?