In what has been called the "most stylish and seductive work of literary theory written in the Renaissance," Sir Philip Sidney lamented that "poor Poetry" had fallen "from almost the highest estimation of learning . . . to be the laughing-stock of children" (p 81-2). Today, this sounds hyperbolic. Sidney's contemporaries, after all, included Edmund Spenser and William Shakespeare. In English alone, the preceding 200 years had witnessed Chaucer, Langland, the Pearl Poet, and many others, while on the near horizon were Pope, Donne, and Milton. Poor poetry?

Critics perennially mourn the death of poetry, though. A striking contemporary example of this was an essay published by Dana Gioia in Atlantic Monthly (May 1991) under a title that would become notorious: "Can Poetry Matter?" To many younger poets, who often feel insecure about their work, it seemed at once a breath of realism and a frustratingly conservative assessment. "Poetry has vanished as a cultural force in America," he writes. "No longer part of the mainstream of artistic and intellectual life, it has become the specialized occupation of a relatively small and isolated group. . . . Daily newspapers no longer review poetry." And so on.

Gioia later used this essay as the first chapter of a book with the same title, expanding his complaint to the professionalization of poetry, its writing programs, self-promotion, its contentedness to lurk on the periphery of American culture. Only a decade later, we sense the hyperbole, for in Gioia's own century: Hardy, Yeats, Eliot, Stein, Stevens, Auden, Frost, Moore, Bishop. Alive and writing in 1991 were Ashbery, Heaney, Ginsberg, and others who have mastered poetry in a wide aesthetic spectrum. Yet we are too close to the present to know what will stand the test of time. And who knows what lies ahead?

Although both of these poets cast their contemporary era in a negative light, Sidney is nowhere near as grim as Gioia. This is because the two writers assume profoundly different definitions of poetry. Gioia implies a formal definition, the kind of traditional poetry with line-endings, metre, often rhyme. This becomes apparent in his list of "major" contemporary poets, which includes Donald Justice, Anthony Hecht, Donald Hall, James Merrill, Louis Simpson. So Gioia's real question is, Can formal poets become famous?

Sidney goes the opposite direction, defending poetry against formalism: "There have been many most excellent poets that never versified. . . . It is not rhyming and versing that maketh a poet" (p 86). He then suggests a definition that is much older and more exciting: "Poesy therefore is an art of imitation, for so Aristotle termeth it in mimesis, that is to say, a representing, counterfeiting, or figuring forth—to speak metaphorically, a speaking picture—with this end, to teach and delight" (p 87).

For the poet there is "no law but wit" (p 87), or what today we might call imagination. The poet's subject matter and form, manner and style are open to radical invention, with the proviso that he "borrow nothing of what is, hath been, or shall be; but range only, reined with learned discretion, into the divine consideration of what may be, and should be" (p 87). For both content and form, the poet always looks to the future, the possible, the religious, the mysterious: "Among the Romans a poet was called a vates, which is . . . a diviner, foreseer, or prophet" (p 83).

Furthermore, poetry is directed by a purpose. It serves as the "first light-giver to ignorance" and the "first nurse whose milk by little and little enabled [people] to feed afterwards of tougher knowledge" (p 82). Its goal is to "teach and delight," one of the concepts Sidney is remembered for.

In other words, if wisdom is the main course, poetry is the appetizer. Poetry breaks down higher realms, more difficult realities into bite-sized pieces that are easy to remember and quote.

Using Sidney's definition, the contemporary question "Can Poetry Matter?" becomes ridiculous indeed. We have to include Dickens, Hemingway, Woolf, Tolkien, O'Connor, Atwood . . . Hitchcock, Welles, Kurosawa . . . Larry David and Jerry Seinfeld . . . even popular musicians such as Dylan, Morrissey, and Eminem. Not to mention a hundred other professional imaginers we don't yet know but are available to our curious eyes just by surfing the Web or by picking up a literary journal such as Fence or a DVD such as Amores Perros.

Much of today's art represents not only extreme formal invention, and an accordingly broad proliferation of genres, but significant moral gravitas. We find today's vates warning against the dangers of materialism and drug addiction, lamenting the curse of AIDS and urban decline, exposing political hypocrisy, and much more. Movies such as Goodfellas, Magnolia, and Requiem for a Dream do this work exceptionally well, as do books like Richard Ford's Independence Day and songs from Bob Dylan's Bringing it All Back Home.

As a writer of more traditional verse—with line-endings, sometimes even rhyme and metre—I don't feel estranged from popular culture. My creative work doesn't seem marginalized when viewed as part of a much larger project of literary art in the English language. My poetry is more than just theoretically connected to the rest of culture; it owes a profound debt to the songs of Steely Dan and Public Enemy, the monologues of Spalding Gray, the movies of the Coen Brothers and the Farrelly Brothers, and the sketches of Monty Python, as well as all the poetry of Wallace Stevens and John Ashbery, Frank O'Hara and Russell Edson. And the beautiful essays of Joseph Mitchell! And the radio comedies of Bob

It is time to experiment, time to leave the well-ordered but stuffy classroom, time to restore a vulgar vitality to poetry and unleash the energy now trapped in the subculture. There is nothing to lose. Society has already told us that poetry is dead. Let's build a funeral pyre out of the desiccated conventions piled around us and watch the ancient, spangle-feathered, unkillable phoenix rise from the ashes.

Gioia reveals his own disconnectedness. It's hard to imagine that an "ancient, spangle- feathered" anything is going to attract a lot of interest among young culturati and intellectuals.

On the other hand, Sidney is still seductive and stylish. He assumes that poetry already holds a powerful place, central in the universe, whether you know it or not. Defence of Poesy concludes:

But if (fie of such a but!) you be born so near the dull-making cataract of Nilus, that you cannot hear the planet-like music of poetry; if you have so earth-creeping a mind, that it cannot lift itself up to look to the sky of poetry, or rather, by a certain rustical disdain, will become such a Mome, as to be a Momus of poetry; then, though I will not wish unto you the ass's ears of Midas, nor to be driven by a poet's verses, as Bubonax was, to hang himself; nor to be rhymed to death, as is said to be done in Ireland; yet thus much curse I must send you in the behalf of all poets; that while you live, you live in love, and never get favour, for lacking skill of a sonnet; and when you die, your memory die from the earth for want of an epitaph.

The planet-like music of poetry! Now this is a confidence that might inspire art—and a curse for those who don't believe. 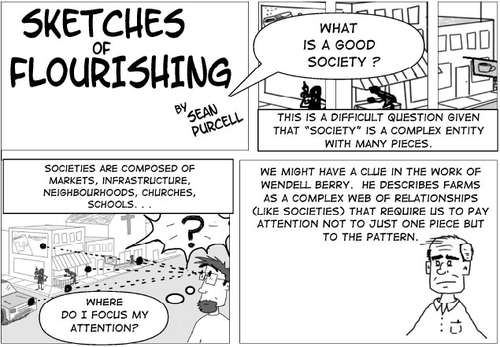