An ecopoetic restoration project, longer on passion than refinement. 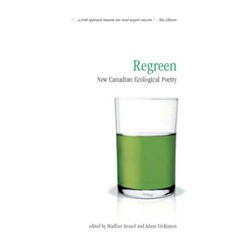 
When Canadians think of Sudbury, Ontario, they usually still think of desolate moonscapes caused by the mining and processing of nickel and copper that has been ongoing since the nineteenth century and has resulted in significant ecological damage and environmental contamination—denuded vegetation, acidified lakes, and soil eroded down to the bedrock.

But perhaps it would be more fair to think of the ambitious re-greening process, starting (really!) with a 380-metre-high "Superstack" constructed in 1972 at the largest smelter. In 1992, a major construction effort was started to clean the waste gases before pumping them up the Superstack, removing around 90% of the sulfur dioxide. Around the same time, Sudbury was given an award by the United Nations in recognition of its environmental rehabilitation programs, including the planting of over three million new trees since the Superstack was built.

Last year, one surprising sign of Sudbury's environmental sensitivity was a poetry book. Published by Your Scrivener Press, a Sudbury publisher, Regreen: New Canadian Ecological Poetry was edited by Madhur Anand and Adam Dickinson, two young poets and academics in southwest Ontario who regularly concern themselves with ecological issues both within and beyond their poetry. Initially, they had planned for the whole book to be about Sudbury and its struggles to new life, but the project developed to include ecologically-oriented poetry from other parts of Canada (the tar sands of Alberta, the Niagara escarpment, the forests of northern B.C., the coast of Nova Scotia), and indeed to embrace the concept of language itself as a kind of ecology.

Formerly teaching at Laurentian University, Anand writes poetry even as she now holds a Canada Research Chair in Global Ecological Change at the University of Guelph; Dickinson teaches poetry and literary theory at Brock University, where his research focuses on "the implications for environmental ethics of the relationship between poetry that imagines itself as science and science that imagines itself as poetry." Having heard about Regreen while it was in process, I was intrigued to see what cross-disciplinary growth might have resulted.

The first thing to mention is that this volume is the only one I've ever read that has two parallel introductions. Adam Dickinson is first, writing elegantly about "the moon: pillar of poetry and science," the moonscape of Sudbury, the scope of "ecopoetry," and the place of language as an ecology. Anand's is second, exploring the connection between her poetry and her scientific work in "ecological modeling," explaining the notion of "restoration ecology" as imaginative re-membering, and introducing the ways in which the poets in this collection do their own work of "regreening." And I'd say these introductions are worth the price of the whole book: the eloquent voices of Dickinson and Anand each have their own particular resonance in this ecopoetic restoration project, and the duet is well worth listening to.

But to the poetry itself. As with any anthology, I suspect every reader will find things to love and things to pass over. The quality is not as consistent as the passion; some of these poets are fairly new to the game, and some, getting a little indulgent in their enthusiasm, could use some firm editorial help. But there are gems here too, both from well-established poets and from some whose names were new to me.

The range is impressive: the poets are from coast to coast to coast, as we say in Canada, and write in everything from traditional to experimental forms. Section I, Dickinson tells us, is composed of the most clearly referential poetry; Section II looks at the "dream of modernity" and its expression in cities and industries; Section III considers language itself as an environment of signification, a "field of ecological relations" which enables us to see the world around us—or prevents us from seeing it. Anand reassures us that we don't have to read the poems in this order if we don't want to: whatever enables regreening of the reader, too, is good.

Particular favourites for me were Bert Almon's "A Duty of Care," about the fraught relationship between caring for wild creatures and killing them for display; Cornelia Hoogland's description of a young boy's need to "test himself / against the elements"; and Brian Bartlett's eulogy for an island that is no longer inhabited, "going back . . . to photosynthesis and moulds, / to the endless rubbing of water on immigrant glass." I was intrigued by Alanna F. Bondar's prose poetry extract that links the leaf-cutter ants of the Amazonian jungle to the Superstack of Sudbury; by Robyn Sarah's meditation on growing older and the need "to find new openings, new windows"; by a.rawlings's "Signs of Engenderment" turning to "Signs of Endangerment" turning to "Signs of Extinction"; and finally by Christian BÃ¶k's assertion that "Language / is a virus / from outer space" which "promises / a curative."

I was grateful for John Terpstra's linking of time and eternity through the history of the trees in "The Highway that Became a Footpath." I laughed at Ross Leckie's wry description of the palm-trees that make fun of your poetic aspirations on Arizona State University's campus. I smiled with sudden recognition at Don McKay's description of wilderness as the place where our creaturely blessedness and anonymity coincide; I was amazed, as always, by the way McKay taps down to the profound in such apparently effortless language—here he ponders, on a walk through a burnt forest, that "death is made up entirely of ecological niches-to-be."

Adam Dickinson cites environmentalist literary critic Lawrence Buell's conviction that the environmental crisis is also a crisis of the imagination because we live our lives by metaphors. Dickinson goes on, "The ecopoem attends to the world-building (and world-effacing) capacities of language as well as to the natural and social worlds in which the poem is situated." The aim of the book, he says, has been to "provoke us to think about the way in which the environment is not simply a nonhuman wilderness that beckons us toward weekend escapes, but is in fact a composite, plural, interactive space of competing physical, social, and conceptual frames of signification." And since "it is difficult to care about things we do not see, or that do not signify for us," what better reason for a book of poetry that reimagines the environments it describes, and thereby enables us to see anew the issues at stake and the spaces that contain them.

How to honour dead poets: P.K. Page and the glosa form