Showing Us Our Inconsistent Selves

According to The Hobbit, the twenty-first century loves pre-teen bathroom humour, absurd chase scenes, sentimental mush about home and family—and other-wordly beauty and heights of awe. Thank you, Mr. Jackson. 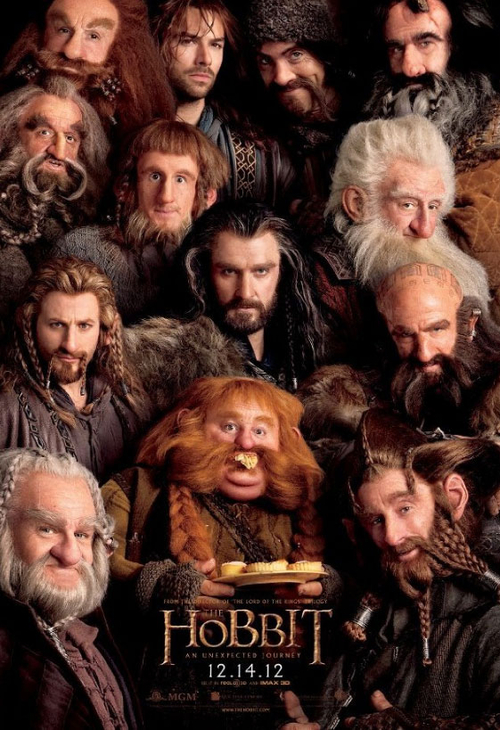 "Every good story deserves embellishment," Gandalf says at the beginning of The Hobbit: An Unexpected Journey. This could, of course, be read as Peter Jackson's justification for what Tolkien purists will see as a mutilation of their sacred story.

Or it could be read as an astute observation on the generative nature of art-making: good art breeds more art, good writing more writing, good books movies, and good movies more movies. In fact, Gandalf has said something profound about the history of literature, textual criticism, and (arguably) even something as essentially human as Biblical interpretation.

But to stay within the realm of The Film: this Hobbit is inescapably a Hobbit of the moment. Such an observation might seem simple, but consider this. The very same book adapted in two different decades, even if the exact same technology were available, the same director, perhaps even the same cast, would be a different movie, because adaptations are made to fit their times. Another way to think about this is to remind ourselves that we should not judge adaptations by their supposed fidelity to the source text, but that we should evaluate them as works of art in and of themselves, and in their contexts.

What does this theorizing mean about The Hobbit: An Unexpected Journey? It means that certain contemporary aesthetic standards are used in the casting, costuming, characterization, and tone. There are particularly twenty-first century attitudes toward diversity, war, and authority. There are gestures toward spirituality of a kind acceptable to the modern mind. These are all markers of human societies, and they are reflected in, parodied by, or rejected throughout the way any work of art is made.

In The Hobbit, the aesthetic standards are just silly. Though this movie was premised upon worthy ideas, the film is slapstick and slap-dash: a mish-mash of idiocy and epiphany. It does not know whether it is a sweeping faux-historical epic, a heartwarming tale of homecoming, or a forgettable comedy. That mixture itself is revelatory of the times in which this movie was made. Apparently, the twenty-first century loves pre-teen bathroom humour, absurd chase scenes, sentimental mush about home and family—and other-wordly beauty and heights of awe.

Jackson's Hobbit is too much of a loose string of genre clichés to deserve too much serious critique, but since it occupies an important position in the entertainment economics of our times, an examination of its themes and aesthetics can be rewarding.

For starters, ideals of male beauty have changed since Tolkien wrote the books, and are in any case different on screen than on the page, where they are an empty space only partly shaped by words, and otherwise to be filled and coloured by the reader's imagination. Unlike the symmetrically proportioned kouros of ancient Greece or the triangular torso of the Renaissance, today's poster man is slender, even gangly. Two of Jackson's dwarves, Kili and Thorin, though weighed down by armour and gear, are quintessential examples of today's lean male model—at least up close, when it is possible to forget that they are only four feet tall. The camera mostly shows them in each other's company, or in Bilbo's, where they look tall and dramatically handsome. Richard Armitage's smouldering good looks are centred, over and over, against battlefields, dragon fires, smoking skies, flaming trees, and stormy twilights. He is the stock Epic Hero. These two "hot dwarves" have come a long way from Tolkien's shapeless old caricatures.

On the other end of the spectrum of masculine attraction are the ethereal, effeminate elves. While Tolkien did go to great lengths to describe the beauty of his male elves, he always emphasized that it was a "fell," dangerous beauty. With the possible exception of Hugo Weaving's Elrond, these film elves are just a touch too metro for Middle Earth. Again, there are the long lines of slender bodies, rather than the hardened sinews of immortal warriors. Our age, then, seems to hunger for the thin, the attenuated, or the questionably sexual in its on-screen men.

Similarly, the presentation of dwarves, orcs/goblins, and hobbits is dependent upon twenty-first century taste—not just Peter Jackson's taste, but on the collective taste of movie goers. These characters would be (and indeed have been) presented differently by and for each generation. They have been mostly seen as "cute" in the past, whereas now we seem to have a craving for either the sublime or the horrible; compare Tolkien's "Tra la la lally" song in the text of The Hobbit (childish silliness) with the "Far Over the Misty Mountains" Gregorian chant in the movie, which reaches deep into the moving power of music. Then compare both to the hideous diseased flesh and awful rhymes of Jackson's Great Goblin, and that will be a study in illuminating contrasts.

These are not just academic observations of contrasts. In an age that is so much more racially sensitive than Tolkien's, treating characters of varying races is a tricky business. Jackson seems to have been torn between two approaches. On the one hand, his orcs, goblins, and wargs are much more animalistic than Tolkien's. His wargs do not speak; his Azog speaks orcish rather than the Common Tongue. But this is culturally problematic in an age of nascent post-humanism, when animal studies and even animal theology are hopping topics. On the other hand, he oversimplifies his villains down to stereotypical epic bad guys, complete with a prosthetic hand and a penchant for killing subordinates. Yet he takes this too far: his orcs and goblins are horribly mutilated and diseased, missing limbs, eaten by cancer, deformed by war and illness. Using skin disease as a visual cue of evil may be as potentially problematic in our times as using skin colour was in another.

This ambiguity is just one of many in the Hobbit hodge-podge. There are elements of lighting, music, and pacing that show Jackson does not settle on a tone any more than he settles in a genre. The glorious landscapes are often at odds with the dwarves' petty food fights. The elvish spirituality clashes with dirty trolls scratching their ugly bums. Someone making art would have unified these disparate elements in the complexity of life itself; someone who is making money just dumps them together, knowing his fans will flock to the box office for anything he dishes out.

Finally, this mixture makes it hard to read what might be called the "politics" of The Hobbit. There are political over- or undertones of our times in every thoughtful film. But this one is such an overworn rise-of-evil cliché that it is difficult to discern even the undertones. Unlike the original Lord of the Rings books, where readers immediately associated Sauron with Hitler (or Stalin), or the Ring with the atomic bomb (or original sin), this movie offers the tired old adage that evil is bad and home is good; darkness is bad and friends are good. We knew that, thank you, Mr. Jackson. What we didn't know was how you were going to tell the story of our times. Now it isn't clear that you have. I guess we'll have to wait for movie number two and movie number three—and keep giving you our money at the box office for you to show us our inconsistent selves.

This is (not) a Love Story: An Incredulity to Love in Popular Culture

Is Being Uprooted a Different Kind of Growth?

Two great films in theatres this summer have helped me consider questions of moving, value, and place.