The Age of Look and Feel

We now live in an aesthetic culture: an "age of look and feel." This new focus on the sensory nature of things—their visual, tactile and emotional character—has become a major factor (perhaps even the major factor) influencing the design of the things we buy and the environment we build.
by David Bruce Hegeman

We now live in an aesthetic culture: an "age of look and feel." This new focus on the sensory nature of things—their visual, tactile and emotional character—has become a major factor (perhaps even the major factor) influencing the design of the things we buy and the environment we build. Aesthetics has become big business in North America, and it in turn has spawned a new creative class of design professionals who are key contributors to our economic vitality.

This alleged emergence of a new culture is explored in two recent books: Virginia Postrel's The Substance of Style: How the Rise of Aesthetic Value Is Remaking Commerce, Culture, and Consciousness (HarperCollins, 2003) and Richard Florida's The Rise of the Creative Class and How It's Transforming Work, Leisure, Community and Everyday Life (Basic Books, 2002). In this column, I will examine Postrel's aesthetic vision. In my next column, I will interact with Florida's controversial theses on the growth of the creative class.

As a former editor of Reason magazine and an ardent libertarian and defender of the free market, Virginia Postrel brings a fresh point of view to the analysis of aesthetics and the role of design in contemporary culture. Throughout her (bright red!) book, she endeavours to demonstrate that aesthetics has, in and of itself, real economic value and that its value is as legitimate as cost, comfort, and convenience—factors that few would deny are valid measures of value.

For Postrel, aesthetics is a market phenomenon: something is aesthetic if it appeals to a consumer's sensual nature and sense of delight ("I like it") and in turn influences him or her to purchase something—often at a premium. She has no shortage of well-chosen anecdotes to bolster her claim.

Yet for Postrel, aesthetic value is not objective. Rather it is subject to the often fickle taste of consumers which, she admits, seem to be in constant flux. How is it that aesthetics has legitimate economic value when it is so (seemingly) arbitrary and/or transitory?

This question is the central focus of the chapter titled "Surface and Substance." Postrel opens with the story in the early 1990s of the bright green Motorola pagers introduced to replace the earlier black model. The new flashy green number was an instant hit with consumers. She quotes the former head of the pager division "that all the fancy-ass technological engineering in the world couldn't get us a nickel more for the product. . . . But squirt-gun green plastic, which actually cost us nothing, could get us fifteen bucks extra per unit."

Now the obvious question is whether spending an extra $15 for a pager is worth the added expense simply because it is a more pleasing colour. A wide range of critics have answered a resounding "No!" to the basic question of whether mere surface enhancements warrant a higher price.

Postrel interacts with several of them, including sociologist Daniel Bell, Marxist philosopher Theodor Adorno, and even conservative Presbyterian minister Sinclair Ferguson (strange bedfellows indeed!). All these critics question the morality of charging more for an item just because it has a different shape or colour (or, in the case of fashion, of deliberately changing the style in order to sell additional items).

Is it right to charge more for something merely because it is more appealing to the senses? Prostrel's basic answer to these critics is that if the market supports it—if people are willing to pay more for something because they like the way it looks or feels—then it must be okay. Who are we to judge another's taste in clothes, toasters, architecture ... or pagers?

A market-based approach might work if all aesthetic choices are equal or if aesthetics is somehow morally or ideologically neutral. But if there are in fact non-subjective standards or laws that govern or at least shape aesthetic choices (and I believe that there are), then some aesthetic solutions should be avoided, and aesthetic value should be reconsidered given the existence of these norms. Selling unaesthetic goods to people who have warped or poor taste looks a lot like economic abuse or exploitation. Selling goods at a premium that have at best marginal aesthetic superiority would seem to be wrong, even if consumers are willing to pay more.

Is a green pager really $15 more stylish than a black pager? It is easy to imagine a world of green pagers where a newly introduced back pager is sold at a premium. What does this say about the legitimacy of aesthetic value, especially if it is determined by the market alone?

Having said this, I agree that there is such a thing as aesthetic value. Aesthetic value is possible precisely because it is based on aesthetic standards which, like ethical standards, are grounded in the personal character of the Triune God. Moreover, the style of a designed thing (the total expressive effect of its distinct aesthetic qualities) is itself a powerful carrier of meaning.

Postrel does not deny this. In another chapter titled "Meaningful Looks," she explores how aesthetics has a powerful effect on shaping one's personal identity (the principle of "I like that" gradually turning into " I'm like that"), which operates in large part on the basis of connotations that "surfaces" inspire. It is no doubt true that aesthetic meaning is based largely on historical and cultural context. The varied meanings associated with a given colour in different cultures make this all too clear. But even this interaction with aesthetic context is subject to the laws that govern aesthetics.

It appears that Postrel fails to appreciate how style is inescapably based on the values of a culture's prevailing worldview. As Henry Van Til observed in The Calvinistic Concept of Culture, "culture is religion externalized." This applies equally to the content and the style of the stuff that makes up any given culture. Style indeed has substance because it inescapably embodies the ideology of its maker(s).

The question is: what are the designers saying in the style they choose for a given object? Is there an implied sense of sadomasochistic violence? A Zen sense of calm? A Childish silliness? A whimsical sense of irony? An air of sobriety? Are we really expected to treat each of these different design solutions the same, simply because there are consumers who want to buy them?

Please note that I am not saying that we should (necessarily) ban or censor certain styles because of the aesthetic connotations embedded in them. But rather than blindly celebrate the aesthetic exuberance we find all around us today, we should ask ourselves what the aesthetic aspect of our culture says about us. (One frustrating omission in Postrel's approach is her failure to adequately explore the nature of aesthetics: why it is that one design is more beautiful or appealing than another?) Much of what passes as design excellence is really an indictment against our society.

Virginia Postrel's book should be a true eye-opener to every cultural activist within the church: an open invitation to a higher degree of aesthetic self-consciousness. Aesthetics really matters because we are creatures made to respond personally to the beauty of God and the delights of His creation. We have no choice but to live in a world that has been very deliberately designed to look and feel a certain way.

Are we aware of the messages that the styles of our cultural environment contain? Do we follow the prevailing stylistic conventions thoughtlessly? Or do we exercise discernment in our aesthetic choices, taking reasonable care in our decisions about clothing, household goods, personal looks, and dwellings?

As Christians, we should not allow ourselves to be tossed to and fro by every whim of fashion. Our minds are being transformed and renewed so that we will no longer be conformed to this world—including its aesthetic milieu. Our aesthetic sensibilities need to be trained in what is truly beautiful, elegant, harmonious, imaginative, noble, and so forth. (This should be a central goal of the education we give our children.)

This does not mean that we will reject everything that is in the marketplace. By common grace much of what is designed and made is truly worth taking delight in. But we cannot escape responsibility for the aesthetic choices we have to make. And, to state the obvious, we need more Christians who understand and live the biblical vision of beauty in every design field.

The prospect of a truly aesthetic culture is a bright one: a vision that every Christian should applaud. For too long in the United States, at least, a pervasively utilitarian outlook has governed the making of things. This in part is due to the no-nonsense attitude of the Puritan fathers, who ironically, for all their sobriety, enjoyed a visually rich culture. (See Leland Ryken's Worldly Saints: the Puritans as They Really Were for the real scoop on Puritan culture.)

The result of this substance-over-style approach to design has been an aesthetically impoverished North American culture—in spite of ours being of the richest nations in the world. Many of us have been jealous of other societies such as Japan with its highly nuanced, detail-oriented culture and wondered, why can't we have that here?

The Substance of Style demonstrates that there is a renewed interest—maybe even a dominant interest—in aesthetics in North American culture today. But will this interest result in a genuinely aesthetic culture—or a mere chimera which goes by that name?

Dave Hegeman is a librarian and writer in Newberg, Oregon, and does watercolours whenever he can. He is the author of Plowing In Hope: Toward a Biblical Theology of Culture (Canon Press, 1999). 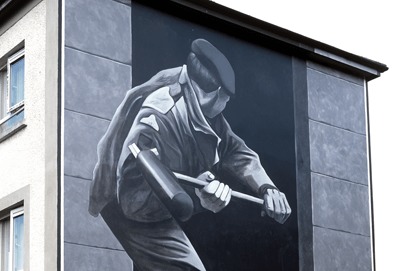