The city and its renewal

Late, long-time U.S. Speaker of the House Tip O'Neil thought "all politics is local." David Koyzis doesn't think either urban or rural life is normative, but points to how cities could be nurtured to become more livable and sustainable over the long-term. 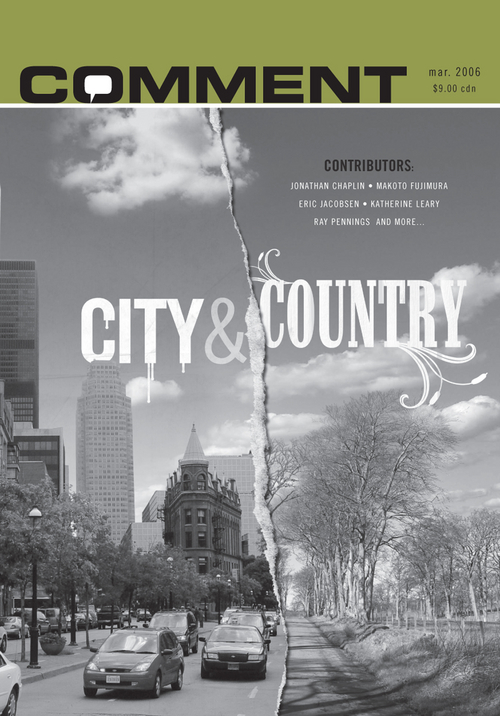 The ancient Greeks were famously attached to their cities and tried against long odds to preserve their independence in the face of both the menacing Persian superpower across the Aegean and their potentially rapacious neighbours closer to home. This brought them almost continual warfare during the 5th century BC, yet the defence of the city and the advancement of its interests was embedded in a worldview in which urban centres played a pivotal role. Sir Ernest Barker points out that for the Greeks the city was more than simply a collection of people who just happened to be living at close quarters in the same place. It was, rather, "a moral being, with a set character of its own," "an ethical association for the attainment of virtue." Aristotle went so far as to assert that man is a "political animal"—that is, a being meant to live in the polis or city—expressly doubting that one could genuinely retain one's humanity outside of that context. Given that the aim of human nature is the virtuous life and that virtue requires community, he believed that the city played a central role in moving people towards the fulfilment of this end.

While he deeply distrusted Athenian democracy, Plato could nonetheless hardly imagine living life apart from the city. In his celebrated account in The Republic of the lengthy discussion between Socrates and his friends, it seemed natural that the quest for justice should lead to the building of a hypothetical city. For Plato and Aristotle alike the city was a community characterized by complementarity of function and mutual interdependence, even if they disagreed on the nature of its unity.

Although the self-sufficient polis was soon to be eclipsed by more territorially-extensive empires, the ideal of the self-governing city-state continued to haunt western political philosophy and practice alike for more than two millennia. To a great extent, the Swiss revolt against the Holy Roman Empire must be seen as a reassertion of local self-rule against the pretensions of centralized political authority. Genevan-born Jean-Jacques Rousseau's Social Contract presupposes the possibility of a small-scale community—perhaps a Swiss-style canton—in which the general will of a sovereign people animates and validates the laws. Of course, not every counter-cosmopolitan argument necessarily favours urban life. Aleksandr Solzhenitsyn, for instance, is a localist with a pronounced affection for the 19th-century Russian zemstvo, or rural commune.

Yet even with the dawn of empires and unified nation-states the city continued to play a central role. Characteristically, the Roman Empire was named for a city. Well after the fall of Constantinople, Greek Orthodox Christians continued to style themselves Romans, as did their Ottoman conquerors. Turning from "Athens" to "Jerusalem"—using Tertullian's well-worn city-based metaphors—we see a similar prominence given to the urban centre. One of the decisive events in the early Old Testament narrative was the capture of Jerusalem from the pagan Jebusites by King David, who subsequently made it his dynasty's headquarters. The beginning of the second exile was marked by the destruction of Jerusalem by the Babylonians in 587/6 BC. So attached were the exiled Jews to this holy city, once home to King Solomon's Temple, that the psalmist could write: "If I forget you, O Jerusalem, let my right hand wither! Let my tongue cleave to the roof of my mouth, if I do not remember you, if I do not set Jerusalem above my highest joy! (Psalm 137:5-6).

For some five millennia, from the rise of the first cities in the fertile crescent, cities have been an inevitable consequence of an historically developed communal life—of a civilized life in the company of our fellow human beings. Cities are, furthermore, intimately connected with the extension of political authority, along with the uniform standards of justice it brings, over large territories, whether these be styled kingdoms, empires, republics or nation-states. The task of governing requires, among other things, an administrative apparatus, including public service personnel to staff the requisite offices. In most of the world's countries the various institutions of government are concentrated in a single capital city, which is often a centre for other cultural and economic activities as well. Would-be conquerors inevitably head for the capital of a coveted territory, since capturing the heart of the political system usually brings the rest of the country with it. Similarly, when we speak of the actions of the Canadian federal government, we often observe that Ottawa did such and such.

Of course, in the literature of both "Jerusalem" and "Athens" cities are also seats of wickedness. In much of the Bible, the name Babylon is synonymous with rebellion against God, as are Sodom and Gomorrah. For the Athenians, Sparta conjured up negative connotations, to say the least, due to the intense rivalry between these two cities. In more recent decades a country's urbanization coincided with its secularization, as seen in much of the western world. These tell us, not that there is something intrinsically evil about cities, but that, like all manifestations of human cultural formation, they too are subject to sin. Indeed, if the larger society develops in an unbalanced, distorted fashion, its cities will hardly be exempt from this.

What exactly is a city?

Two possible definitions present themselves. The first is a political definition: a municipality, a differentiated, explicitly political subcommunity within the larger body politic. As such it is governed by a constitution of its own, consisting perhaps of a mayor, city manager, city council, and a variety of related institutions, including police and fire protection. Education, garbage collection, water supply and sewage treatment may fall under the jurisdiction of the municipal or another government, or some of these services may be provided by the private sector. The late, long-time U.S. Speaker of the House Tip O'Neil once said that "all politics is local," possibly recognizing that personal involvement in local dimensions of politics will likely yield more tangible results than involvement on the provincial/state or federal political stages.

There is a second definition of city which is more apropos to our purposes here. A city, like a nation, is a multifaceted network of local, differentiated communities—a community of communities—defying easy identification along social, economic, political or religious lines. I am tempted to label it a cultural phenomenon, as long as we understand culture in the broadest possible sense. Like a nation, a city tends to have its own peculiar ethos, enabling people to distinguish between Toronto and Montreal or between Chicago and New York. Aristotle's error was in conflating these two definitions, ascribing to the city a totalistic character.

I myself was born and raised near Chicago, which at the time was the second largest city in the United States. We were suburbanites and called the entire metropolitan area "Chicagoland." Republicans all, we abhorred the thought of being ruled by then-Mayor Richard J. Daley's Democratic machine in Chicago proper. Every one of the hundreds of suburban communities valued its relative political independence, yet we all defined ourselves in terms of that great city on the shores of Lake Michigan. We visited its museums, frequented its ethnic restaurants, shopped in "The Loop," and possibly even commuted by rail to work in the city. Many of us had roots in Chicago itself, but our parents or grandparents had migrated outwards after the end of the Second World War, filling in much of the open space in the surrounding counties.

Sadly, that same era saw the steady deterioration of the inner city, especially the south and west sides, indicating that the development of Chicagoland was occurring in dangerously lopsided fashion. As crime rose steeply after the mid-1960s, we assiduously avoided certain parts of the city, restricting our visits to "The Loop" and the near north side. In the meantime our property tax revenues went to suburban Evanston, Oak Park and Elmhurst, even as we continued to draw economic and cultural sustenance from a Chicago whose municipal services were deteriorating along with the diminishing tax base. Many of the older neighbourhoods which had once made the city distinctive, such as Roseland and Englewood, gave way to decaying buildings and fearful residents caught in a cycle of poverty and despair. Even efforts at urban renewal, based as they were on paternalistic models, only exacerbated these growing problems.

North of the border, Canadian cities are notably safer and arguably more vibrant and livable than their American counterparts. Yet even here all is not well and forces are at work that are effectively attenuating the long-term health and well-being of our urban communities. I lived in Toronto for two years in the late 1970s and came to love every corner of this world-class city. Yet the skyrocketing cost of living has severely curtailed the ability of people with ordinary means to live there, making it difficult to maintain community over more than a single generation. Moreover, although Toronto may have a fraction of the crime seen in Chicago, law-breaking is definitely part of life there.

What is the way forward in renewing urban life? Several possibilities are worth considering: