The Ethics of Attention in an Age of Distraction

Why you need to get out of your own head.
by Brian Dijkema 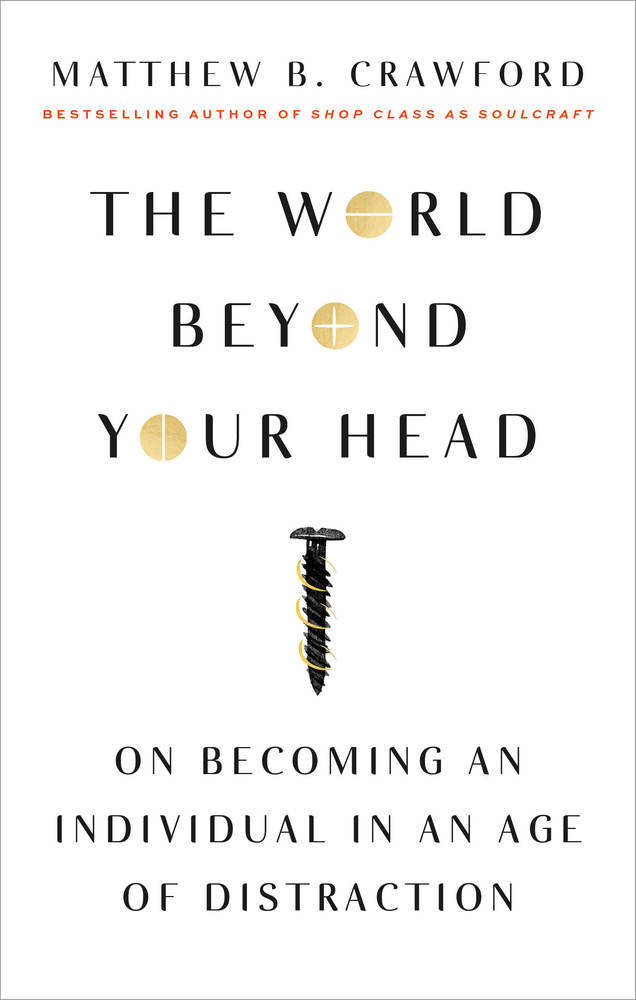 The World Beyond Your Head: On Becoming an Individual in an Age of Distractionby Matthew Crawford. Farrar, Straus and Giroux, April 2015.


Most of us think of distraction as a mere annoyance—a mild humming in the background while you work, a fly landing on your book while you read. We don't usually think of it carrying the weight of a serious moral problem. In his new book, The World Beyond Your Head, Matthew Crawford argues that our inability to pay attention does carry such moral weight, and he argues this precisely because it dissolves our individuality and our freedom.

Crawford is not the first to note the challenge of attention in our day. Nor is he the first to equate our liberal age with the fading of the individual into a nondescript mass. What makes his book so valuable is his connection of the two. Distraction and the dissolution of the individual are related problems that arise as a result of a loss of connection to material reality, the world of flesh, blood, wire, and mud.

Crawford resists the temptation to simply scapegoat "technology," arguing instead that blame for this loss should be directed at our cultural assumptions about what it means to be rational and free. In short, it's not only our phones that are killing us with distraction, it's our epistemology and our anthropology, our understanding of how we know and who we are.

Crawford argues that the modern notion of rationality proposed by Descartes, Locke, and Kant is premised on a deep suspicion of the sort of knowledge gained through interaction with objects or people in the world. This understanding of rationality constituted a philosophical revolution:

The standard for truth is relocated: it is no longer found out in the world, but inside our own head. . . . Attention is therefore demoted. Or rather, it is redirected. Not by fastening on objects in the world does it help us grasp reality, but by being directed to our own processes of thinking, and making them the object of scrutiny.

There is an ominous consequence to this: if we have no basis other than our own minds for confirming this reality—either in the physical world or in community—we become vulnerable to mediated presentations of the world. Using advertising and casinos as case studies, Crawford shows that very sophisticated people are keenly aware that attention has a basis in the real world, and they have invested considerably in learning how to monopolize our attention. Far from empowering us, our commitment to rational autonomy and choice has left us susceptible to "hyper-palatable stimuli" that others use to own as much of our limited attention as possible. And monopolized attention, like a monopoly in the economy, leads to sameness and the loss of individuality. Ironically, the project intended to free individuals from dogma, superstition, and political control ends with conformity.

Crawford, like a steampunk Alasdair MacIntyre, argues that we need a different rationality if we want to be free. We need to go into the world beyond our heads. To show us what that rationality looks like, he takes us on a tour of Taylor and Boody, an organ-makers' shop in Virginia. The picture that emerges from the sawdust and stacks of organ pipes is a type of rationality he calls "an ecology of attention." An organ cannot be made simply by studying paper representations of organs in books. Organ makers must work within a tradition handed down by previous generations of organ makers. These traditions enable us to pay attention to both material constraints (e.g., certain woods produce better or worse music) and how such constraints can help achieve the purpose of the instrument: the making of church music. Yet these constraints are not meant to choke or bind. "Those who work within a craft tradition cannot identify the good with the old," notes Crawford. Organ making, like philosophy, is "a living tradition," "a living conversation, concretely expressed in action."

To be educated, notes Crawford, is to "be led out of oneself." He beautifully captures the communal and historical nature of learning when he cites Iris Murdoch's meditation on learning Russian: "Love of Russian leads me away from myself towards something alien to me, something which my consciousness cannot take over, swallow up, deny or make unreal." Being educated requires submitting to authoritative structures—to competent authorities—which serve as a check on your subjectivity.

These structures are found in what Crawford calls communities of skilled practice, where "competence rests on an apprehension of real features of the world, as refracted through some set of human needs/desires and corresponding technologies." In short, says Crawford, "we think through the body."

Crawford's book is intended to be more than a self-help manual. It is an encouragement to discover or recover what makes us human in the first place, and so to become fully human. Given this focus, you might expect him to discuss religion. But religion, at least insofar as it's typically understood, doesn't play much of a role in his book. Why is this?

Crawford tacitly assumes that religion focuses on the immaterial and on things beyond this world. We see this assumption in a passage where Crawford speaks most clearly about the deeper impulse guiding his work on attention:

Indeed the transcendent can be experienced in this world. In a sense, surfing is magical. The same is true within the bounds of other material practices. Sex is transcendent. This is true whether you believe in God or not. And someone who believes in God can—indeed should—support those who want to recognize beauty and the sublime in the material world.

But will a "this-worldly ethic of attention" do all the work that Crawford wants it to do?

Crawford wants to move beyond the relativism that results from living in our heads and to reestablish both the self and the commons. But I'm not certain that this can be done without getting behind an ethics of attention to what we might call a hermeneutics of attention. How does one go about deciding what is worthy of our attention, even if we agree that it should be something concrete? While it is certainly possible to shape what Crawford calls the "attentional commons" without providing a definitive answer to ultimate questions, I'm less certain that we can achieve it without robust discussion of them. Communities of practice are important, but without guidance on how they fit together or political authorities to address and shape law to accommodate or encourage them—we're likely to end up with relativism again. A better relativism, perhaps, but relativism nonetheless. If we are to understand with Crawford that life itself is an act of craftsmanship, we need the same tools that any craftsman needs: authoritative structures, disciplines, habits, and masters who can help us craft good lives. Alan Jacobs notes that Crawford doesn't tell us enough about how "philosophy is far more a product of existing social and economic structures than it is an independent entity." My question for Crawford is similar: Who, or which community, is competent to guide us in crafting good lives?

His failure to address this issue, however, doesn't diminish the quality of his book. In fact it is instructive for those of us who find in the church—which also knows through the body—the community most competent to help us become truly human. While reading this book I found it helpful to pause occasionally and consider to what extent the church is living up to its confession, not of the "mind" or "conscience," but of the "body" of Christ, who is very much, by definition, "this worldly."

Crawford's attempt to find meaning within the world is a case study in what Charles Taylor has called in A Secular Age the "nova effect," which he describes as "the felt dissatisfaction at this immanent order," which "motivates not only new forms of religion, but also different readings of immanence." Taylor goes on to note,

So the need for meaning can be met by a recovery of transcendence, but we can also try to define the "one thing needful" in purely immanent terms. ... Without appeal to religion, we can seek to give resonance to the everyday, to nature and the things around use, by calling on our own depth sense.

Christian worship, by definition, calls us out of our head to attend to God and neighbour. And if we take Crawford's words at face value, this is erotic attention. Which leads me to think that Christianity is particularly well suited to meet the anxieties of our age. Christianity is, after all, a religion of transcendence made immanent. After all, who is Jesus but Immanuel? Our God wore diapers and was breastfed. Rather than asking Crawford and any number of others in our haunted age who don't find themselves gripped by these questions to be persuaded of this intellectually, perhaps the church could concentrate—not only in our Sunday-morning liturgies but also in those we practice Monday through Saturday—on showing that it is the body of the God who came in the flesh, the arch-community of concrete human practice.

Perhaps what our anxious age is waiting for are fewer saints like Benedict, and more saints like Joseph.

Twenty-fourth in an expert series on must-read books.