An annotated reading of your world, including poetry, sledgehammers, and the Religious Right.
by James K.A. Smith 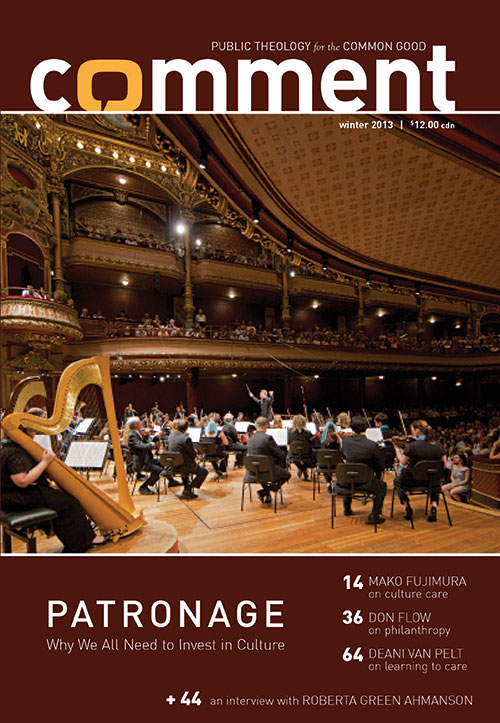 Tending the Ruins | We believe in creation—that as God’s image bearers, we’ve been commissioned to be what Tolkien once called “sub-creators.” It’s why we spend time celebrating creativity and culture-making. We love to share stories of founders and startups, people who use their gifts to give the world cultural goods like art and apps, building companies and launching organizations.

But there is another side to being creatures, too. We’re finite. We’re mortal. We age. We die. We start things, but we ourselves will come to an end. Because we live between the Fall and kingdom come, we do well to remember that things wind down, wear out, and waste away. Our best intentions, even our Gospel-centred efforts, cannot overcome finitude and fallenness. So, as those deputized to care for God’s creation, we should not only be infatuated with starting and launching, we should be equally careful about how we tend the end of things. Cultural stewardship this side of the kingdom includes a kind of cosmic hospice as well.

I was recently struck by the good, hard work of dismantling while enjoying a poem in The Best Canadian Poetry in English 2009. The poem, by Anita Lahey and simply entitled, “Man Tearing Down a Chimney,” is a meditation on the care it sometimes takes to destroy something well. Oddly, good destruction is something of a gift:

The chimney and the man have both reached
their thirties, but he is limber, lithe. Each
day he better fits his torso;his arms and legs
become like tools, gleaming—they beg
to be used fully, without restraint, and in
moments such as this, when an ending
must be ushered in before it collapses
onto a child, a dog, a car, or crashes

We do well to remember that the cultural mandate entrusts to us a tender creation, in all its fragility and finitude, beset by brokenness. You’d think we’d spend more time thinking about how to tend the ruins. Sometimes culture making requires a sledgehammer. But how to wield it well? What does it look like to use our creative gifts to dismantle what needs to come down, like the poem’s crumbling chimney?

They sit in the kitchen, a bottle each, solemn.
Every brick and chunk of brick has fallen.
A blue tarp blankets the gable hole and thin wall,
and just in time, too: rain runs down it, and all
her thoughts run alike: Here’s a man who
broke a chimney’s back because he knew
where to hit and how hard. But no. I think
his secret was merely to start, and at the brink
of defeat, hit harder. Like a woman who’s just
given birth, he has earned silence.

This, too, is good work.

Renovations of the Heart | Speaking of good, hard work: I spent our twenty-third wedding anniversary demolishing a bathroom. On the one hand, this was pretty much the worst anniversary ever. On the other hand, it ended up being a spiritual discipline and illuminating allegory all rolled into one.

The work was unexpectedly gruelling, and not just for someone whose only calluses are from excessive typing. What I thought would be a straightforward process of removing a layer of tiles—a few hours’ worth of work, tops—turned out to something much more involved. As soon as I peeled back the layer of tile I discovered a bedrock of cement, two inches thick. And woven throughout this cement was a thick wire screen that functioned like a veritable rebar. And here I was in a 3’ x 3’ space with no room to swing a proper sledgehammer. The labour was both tedious and exhausting, carried out in the heat of a late summer day. I periodically emerged as a dusted, zombie-like creature and could only sprawl out on the cement patio at the back of the house, dead-still. At one point my neighbour came by to make sure I was still breathing.

But more than once in the process I was struck by the parallel between this gruelling work and the good, hard work that is a marriage. All too often we enter the adventure thinking it will be relatively easy, only to peel back a first layer and realize that there is a mire of cement laced with wire that has to be undone. Deanna and I married as children, almost: I was nineteen, she was twenty-one. While we came into this with eyes wide open, and an unconditional commitment to the covenant, it would take a little time—peeling back a layer—before we really realized what we were up against. We were both the products of broken homes, multiple times over, and probably didn’t realize that we first had to dig ourselves out of a hole. We were working without exemplars, and without a net. We couldn’t have known the demons lurking beneath the surface, or the generational inheritances we’d have to roll back. Sometimes building a life together also requires disarming the powers and principalities.

And yet we weren’t alone. We were never alone. Christ, the bridegroom of the church, made a promise even before our promises. Even as good Protestants, we have always believed two things: that marriage is a sacrament and a friendship. It’s a friendship in an Augustinian and Aristotelian sense: the calling of a friend is to call me to my full humanity, to foster my flourishing. The good friend is the one who calls me to the mat and leads me toward the Good. This is also what makes it a sacrament: for those of us called to be married (which isn’t all of us), our spouse is a conduit of grace given for our discipleship. Deanna has always been that friend and sacrament to me. When some people (rightly!) complain about my rough edges, I sometimes reply with a Chestertonian quip: “Heavens, imagine the monster I’d be if I wasn’t married!” I’ve always identified with Jack Nicholson’s simple confession to Helen Hunt in As Good As It Gets: “You make me wanna be a better man.”

The sometimes-gruelling, always-graced work of marriage is not unlike so much of our cultural labours, whether fostering friendships, sustaining a congregation, or building institutions for the common good. It’s never as easy at it looks. And we never begin from a blank slate. All of our culture-making is some kind of renovation that requires both undoing and construction. It’s why we need to attend to the renovations of our heart in preparation for such good, hard work.

Has It Come To This? | I think there are quite a few of us who are surprised to find ourselves worrying about “religious freedom.” We probably thought of it as a “conservative” issue, the sort of alarmist fear-mongering we associated with the Religious Right, including the annual handwringing about the alleged “war on Christmas.” In short, threats to religious freedom seemed to be just the sorts of fictional bogeyman people whip up in order to consolidate their “base.” (Exhibit A: see Sarah Palin’s latest book, Good Tidings and Great Joy: Protecting the Heart of Christmas.)

But then I heard Cardus Senior Fellow Stanley Carlson-Thies present his 2013 Kuyper Lecture on religious freedom (which we later reprinted in Comment).

Carlson-Thies calmly but critically pointed out a creeping “individualization” of religious freedom. While freedom of religion is enshrined in Canada’s Charter of Rights and Freedoms as well as the U.S. Constitution, this has been increasingly interpreted as merely a personal, individual right. The same freedom of expression has been steadily eroded when it comes to institutions—most recently in health care law and policy. His analysis and case history was sobering.

As is often the case on such issues, Canada is actually ahead of the American curve here, and no place more so than Quebec. In the name of the state’s “religious neutrality,” the province’s Charter of Values reads like a creation of the Ministry of Truth in Orwell’s 1984, complete with the patronizing, paternalistic assurance that this will benefit everyone—“including newcomers,” an icky, euphemistic way to talk about Sikhs and Muslims. The best thing we can do to ensure freedom of religion, the Charter tells us, is to secure the “neutrality” of the state. When someone assures you they’re “neutral,” you should start getting nervous. The Quebec Charter shows their hand already. It’s not “neutral” at all; instead, under the banner of “neutrality” it serves up “Quebec Values”— which turn out to be a very particular, substantive, liberal vision of how to be human. This, too, is religious.

This is why I’m surprised to count myself among the number who see religious freedom as one of the central issues for the next generation—not because we want to win a culture war, but because we want room to bear witness to another kingdom. Stanley Carlson-Thies’s concluding comments in his Kuyper Lecture are prescient in this respect:

We don’t need religious freedom at all if we have assimilated so much to our culture that we are no different than anyone else, our organizations little different than other organizations. But if we do love God with all of our hearts, minds, souls, and also strength, then we will have distinctive convictions and practices about what is good and about how best to serve others. And then we will require a robust institutional as well as individual freedom to be different— exactly so that we can make our best uncommon contribution to the common good.

Learning to Hope Again | In the face of such shifts and challenges, one of the great temptations for Christians engaging culture is to lapse into despair. But we do well to remember that, according to a long Christian tradition, despair isn’t a matter of indifference, or merely an emotion we lapse into. In fact, it is nothing less than a vice. It is the abandonment of hope.

Fortunately, our gracious Redeemer remembers our feeble frame, that we are but mortal, and meets us where we are. The solution to our despair is not personal willpower or heroic resolve. Hope is not our accomplishment but Christ’s gift. And so the Spirit meets us where we are and invites unto into rhythms and practices that counter our despair. You will receive this issue of Comment as the body of Christ moves through the season of Advent, on the way to that Christmas joy that takes twelve days to properly celebrate, leading to the resplendent light of Epiphany. It is the season in which the people of God learn to hope again, even as we remember how to pray, with holy impatience, Maranatha!—Come, Lord Jesus! May the Christmas Vespers prayer of the Western Rite reposition all of our frustrations and disappointments:

While all things were in quiet silence, and night was in the midst of her swift course, thine Almighty Word, O Lord, leaped down out of thy royal throne. Alleluia! 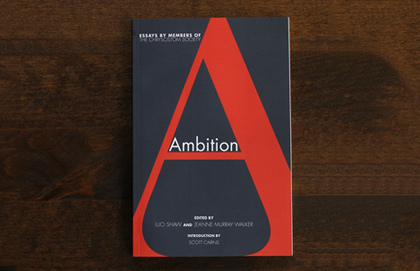