An annotated reading of your world. Topics this issue include small cities and the pursuit of virtue, tiny sabbaths at work, and the faces and names of Comment readers.
by James K.A. Smith 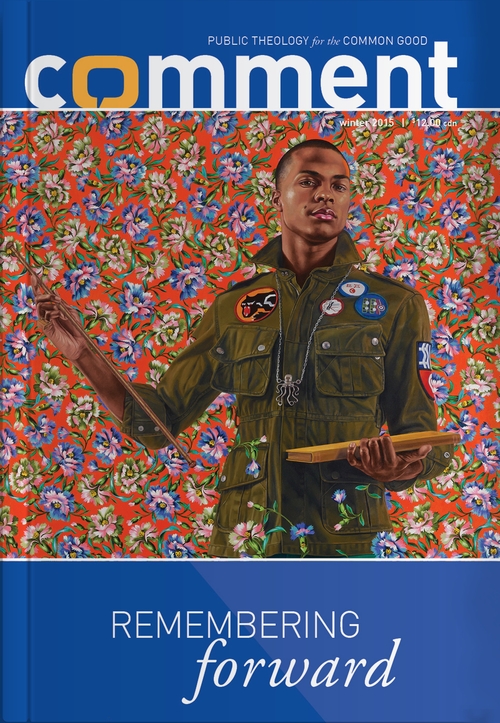 IN PRAISE OF SMALL CITIES | A friend who recently moved to Grand Rapids from Los Angeles is struck by how often, in our circle of friends, we talk about the latest development happening in the city. We share a curiosity about long-abandoned buildings experiencing rebirth, vacant lots becoming canvases for new neighbors renewed energy at the local public school. Just as often, admittedly, we worry about the effects of gentrification, the crumbling of old inner-ring suburbs, the continued block-by-block segregation that plagues us. None of us are urban planners or developers; we're just neighbors invested in where we've been planted.

Having lived in a metropolis or two, this seems to stand in contrast to the anonymity of construction in megacities like Toronto and Chicago, where buildings fall and rise at the whim of some distant power. In midsize and smaller cities like a Grand Rapids or a Louisville or a Hamilton, interest in development and renewal is democratized—no one is ever that far from the machinations of power. There might be something about communal scale here: in our midsize cities and small towns there seems to be a sense that we're all in this together. The local newspapers eagerly track even the tiniest happenings; everyone drives past the same busy corners; neighborhood associations draw us together and focus our attention. The ripple effects of construction touch almost everyone.

Though I'm sure it's also just as easy to inhabit these small cities oblivious to the bustling hope carried in cement trucks and hoisted by cranes, that would seem to be a diminished life. At the very least, it seems like a diminished way of being a neighbor. But we are enjoined not just to see neighbors but be neighbors (Luke 10:36-37). So dive into where you are and become aware of what's around you. It's easy enough to do: Read your local newspaper; attend a charette or town hall meeting; follow the mayor on Twitter; "like" the city's Facebook page; stop and read the posters on the fences and telephone poles; join your neighborhood board association. Open the windows and doors of your home and let the city in.

HOW TO LOVE YOUR HOMETOWN | The sentimental tug of the hometown is ancient. You can get a glimpse of this in an epistolary exchange dating from AD 408—409. The correspondents are Nectarius, a high-ranking imperial official in northern Africa, and our man St. Augustine, bishop of Hippo (in what would be contemporary Algeria). Nectarius, a curious pagan, has written Augustine about a legal matter, concerned about his hometown of Calama, not far from Hippo. While his age and approaching death might seem to excuse Nectarius from concern, in fact the opposite is true: "On the contrary," he writes, "one's affection and gratitude for one's city grows as each day passes; and the nearer life approaches to its end, the more one desires to leave one's country flourishing and secure."

Augustine understands completely. "I am not surprised that your heart still glows with such warm love for your hometown,"; he replies, "even though your limbs are now starting to be chilled by old age, and I praise you for this." But then Augustine doesn't shrink from setting the hook, so to speak: "That is why we should love to count you too as a citizen of a certain country beyond; it is because we love that country with a holy love—as far as we can—that we accept hard work and danger among the people we hope to benefit by helping them reach it."

So Augustine presses Nectarius: If you really love Calama, you should hope its citizens learn to love another City. If you want to leave your hometown flourishing, you need to consider: What counts as "flourishing"? In a brilliant apologetic move, Augustine invokes the pagan Cicero to persuade the pagan Nectarius of what is ultimately a Christian vision. "Think a little about those volumes On the Republic," Augustine urges:

Notice how they proclaim as praiseworthy simplicity and restraint, along with faithfulness to the marriage bond, and behaviour that is chaste and honourable and upright. When a city is strong in virtues such as these, then it can truly be said to be "flourishing." In fact, though, such behaviour is being taught and learnt in the churches that are springing up all over the globe, like sacred lecture halls for the peoples of the world.

If you really want to see your hometown flourish, Augustine says to Nectarius, you should hope it becomes a city that pursues virtue. And if you really believe that, then you, a pagan, should be honest enough to realize that it is the churches doing this work in Calama. Could there be a more contemporary message from the ancient world?

LEISURE AT WORK | It is a special joy for me that one of my former teachers, Calvin Seerveld, has penned our closing column in this issue. Seerveld holds a prominent place in the Reformational communion of saints that has shaped Comment, alongside figures like Groen van Prinsterer and Al Wolters and Nick Wolterstorff and Jonathan Chaplin and many others. Theirs are the "footprints in the snow" we're trying to follow.

Over the past year I've been spending time in the new six-volume set of Seerveld's collected writings, recently published by our friends at Dordt College Press. (My set was a kind gift from my colleagues Dan Postma and Brian Dijkema.) Only Cal Seerveld could leave a legacy of academic writings that double as a devotional treasure chest. The singular cadence of Seerveld's voice, steeped in the Scriptures and charged with passion, stretches the imagination and gives birth to hope. Every page has a gem.

Let me highlight just one. In an essay titled "Ordinary Aesthetic Life," Seerveld identifies two different forces that rob us of aesthetic shalom: a "pragmatistic" culture bent on efficiency and bottom lines and a dualistic, pietistic "Agent no. 666" (!) spirit that demonizes delight and play. Both conspire to "squeeze leisure out of ordinary daily life." But what I found both insightful and convicting was Seerveld's point about daily leisure. It's not just that these principalities and powers have us "working for the weekend"; it's that they squeeze leisure and play and aesthetic delight out of our everyday rhythms.

Here's where the conviction kicked in: a faithful, flourishing life of faithful aesthetic obedience to the Lord is a life that makes time to play and rest at work. While my work might be in service to the Lord, how I work can be captive to rival spirits. "A biblical conception of leisure,'' Seerveld observes, "is that ample time becomes a coefficient of one's daily work activity. In the gospel story I read, the apostles, through the pressure of their kingdom work, did not have enough time to sit down for a meal; 'Let's take a break,' said Jesus."

Can you sense the force of Seerveld's point? If my workdays don't have time for tiny sabbaths of receiving a friend or enjoying a surprise, then some other spirit has become my boss. "When you have enough time in what you are humanly doing," Seerveld continues, "you have leisure. When there is time for you to move around in unpremeditatedly, you experience leisure. When it is possible for you to enter into an unexpected opportunity that arises, you are blessed with leisure."

What idols are driving me to structure my workday otherwise? What pride is buried in my hurried sense that I need to do every thing? It's humbling to realize one is still just catching up to one's teachers.

I think this also means we need to reinstall the ping-pong table in the Cardus offices.

FACES AND NAMES | One of the great joys of my travels "out and about" ("oot and aboot"; in Canadian) is the opportunity to meet Comment readers in person. It's heartening for me to hear their testimonies, receive their encouragement, and get a glimpse into pockets of the Comment movement often hidden in plain sight.

Social media can lull us into assuming that all conversations happen on either Facebook or Twitter. But when I encounter flesh-and-blood people, putting faces to names, I'm reminded of a different kind of "silent majority" that still exists—those enthusiastic readers and thoughtful Christians who aren't broadcasting their thoughts daily on social media feeds. Instead, they are faithfully taking up vocations in concrete locales, loving their neighbors and changing their worlds without having to advertise it. It's deeply humbling for me to meet these comrades. These aren't lives documented on Instagram, but they are written in the Lamb's Book of Life.

Your encouragement is a wellspring of motivation for our team as we take up the labour of love that is Comment. I hope, dear readers, that you've had some time to explore the latest incarnation of that work: the brand new, long-time-coming Comment website we recently launched. (Visit cardus.ca/comment if you haven't already.) Our goal was to create a website that mirrors the aesthetic grammar of our print magazine, and I think our team has nailed it. In addition, the new site has lots of new functionality and capacity, allowing subscribers, for instance, to access the entire Comment archive online. I'm especially grateful to Dan Postma and Rej Aydalla for long hours of tedious work, responding to editors' requests and chasing squirrels out of the old wiring. Think of the website as the place where Comment lives between our quarterly issues. See you there!