A remarkable portrait of one of the ugliest, most universal human phenomena: self-absorption. 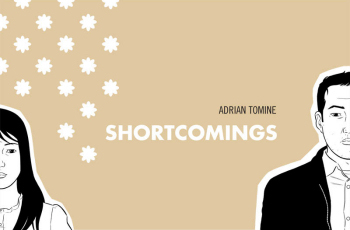 Ben Tanaka is a loser. He's a hypocritical jerk. He's climbing a career ladder to nowhere as a movie theatre manager. His best pick-up line: "Come see a movie for free sometime." When his girlfriend who, like him, is Japanese-American, accuses him of gawking at other—and non-Asian—women, he offers this winning line: "Okay, so I'm brainwashed by some insidious media conspiracy into thinking that blonde-haired, blue-eyed women are attractive. What am I supposed to do?"

This charmer is the protagonist in cartoonist Adrian Tomine's graphic novel, Shortcomings, which traces an especially awful period in Ben's pathetic, peripatetic love-and-lust life. Ben is one glum guy. In 108 pages, he manages something approximating a smile maybe three times. Certainly, he's unlucky, too. One near-smile targets a hot girl at a house party, but she, like almost everyone else there except for Ben, is a lesbian. He's basically unlike anyone you'd ever want to spend time with in real life, yet in the pages of this book, you cannot abandon him.

Much of Shortcomings is spent exploring identity: Asian vs. non-Asian; gay vs. straight; Brooklyn, New York vs. Berkeley, California (the two communities that are the backdrop to Ben's torment). Tomine's depictions—geographical, cultural, emotional—draw considerably on his own experiences and observations as an Asian American who also happened to move from Berkeley to Brooklyn while working on the book. If you're not on the minority end of any of these, well, lucky you. But this isn't just a missive from (or for) the marginalized. There's a bit of Ben in all of us, since the biggest identity issue he's wrestling with is a classic struggle: "me" v. the world. What makes Shortcomings so compelling—and what makes Ben as irresistible on page as he'd be repugnant in person—is the remarkable portrait of one of the ugliest, most universal human phenomena: self-absorption.

Three unspoken words lurk behind everything that Ben vocalizes: "You don't understand." This is the most powerfully alienating sentence in human communication—defiant, barrier-building—and it's pretty much what I thought all through junior high and high school . . . and college, too, and if we're going to be totally truthful here, not a few moments of my alleged adulthood. In my mind, I was incomprehensible—to others, of course, but also to myself. I may have been reared on a Psalm of David—"O Lord, you have searched me and know me"—but the song in my heart sounded more like Green Day—"Do you have the time/ To listen to me whine?" No? I didn't think so.

After I moved to Brooklyn three years ago, one of my first acquisitions, following overpriced real estate, was a shrink. (To be able to drop, "So my shrink says . . ." into conversation is code for "I am a true New Yorker"). So my shrink says, often: "You know, you're not the only one who has been through this." I never want to hear that. The unspoken coda to "You don't understand" is "because I won't let you understand." I felt a sense of conviction as I spent time in Ben Tanaka's world because I do understand what it's like not to want people to understand, to entertain a sense of personal exceptionalism so grand that it's almost, well, French. I suspect we all do. I think 95% of us would admit to having wallowed in what John Bunyan might have called the Trough of Self-Pity, a special zone of the Slough of Despond. The rest are still too absorbed in the muck to acknowledge it.

Tomine couldn't have picked a better title since Ben's prime shortcoming, self-absorption to a degree I haven't seen since The Picture of Dorian Gray, is so universal. Not that he offers any solution or resolution. He ends his book (spoiler alert!) with a series of frames that seem annoyingly bleak. Ben is on a plane back to California, alone. His girlfriend is now his "ex-," having traded up for a photo-taking, clothes-designing, Japanese-speaking white guy. His best friend has chosen Brooklyn over Berkeley and Ben. He looks out the airplane window and sees some clouds passing. And then nothing.

In real life, it doesn't end like that. It's never nothing. Sometimes it gets messier. Sometimes you get over yourself. Usually, you ping-pong between. Always, you hope to find someone who has the right words, and while Ben may think that person should be a sexy blonde, build and hair color and even gender are ultimately irrelevant as long as the words are right. For me, those words are simple. They'd fill my blank frame with hope. "You don't understand," Ben would say, pressing his automatic, personal, wall-erector button. I like to imagine the followers of Jesus replying, in the most tender, most barrier-breaking way, "Just try me." 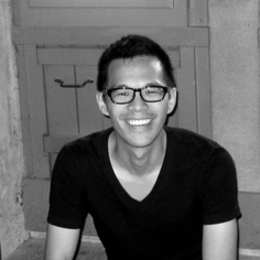 Jeff Chu is an articles editor at the business magazine Fast Company. A former staffer at Time and Conde Nast Portfolio, he has reported from some two dozen countries on a wildly incongruous range of topics, including Norwegian raisin buns, the prosperity gospel in America, and the innovative thinking of the Chairman of the Joint Chiefs of Staff. He won the Deadline Club's 2010 award for best business feature writing for his investigation of misdeeds at the retailer Design Within Reach.

Talking About God in Public

Rowan Williams offers an indispensable aid for anyone struggling to talk about God publicly.