OTTAWA, ON – A three-country comparison of school outcomes confirms Christian independent schools fulfill their intended purpose and perform at similar levels in the United States, Canada, and Australia. Many Educational Systems, A Common Good compared Cardus Education Survey (CES) results in all three countries. While there is some national variation in the results, the most striking finding is the similarity of Christian schools in the three countries. 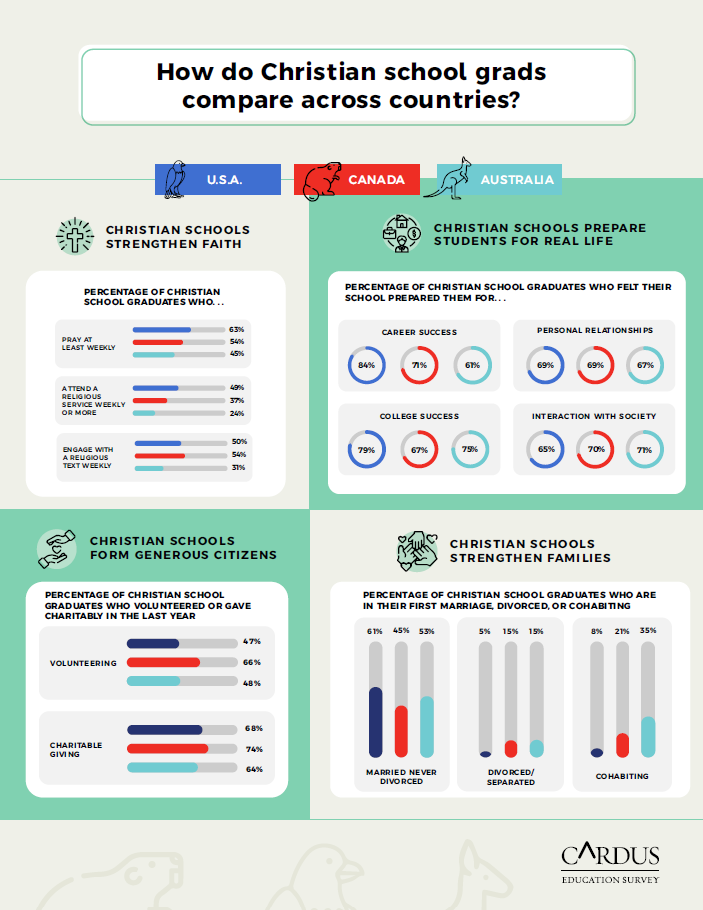 “It’s more important than ever to understand the Christian school community,” says David Hunt, Cardus Education program director and report co-author. “Before 2020’s worldwide school closures, independent school enrolment was steadily rising in the US, Canada, and Australia. This trend has only accelerated recently because of the extraordinary contrast between Christian schools’ innovative pivot and other school sectors’ unresponsiveness to student needs. Parents, educators, and politicians ought to be aware of the positive and constructive role these schools play in building the common good.”

Since 2011, Cardus has regularly surveyed secondary-school graduates of government, Catholic, Protestant, and secular independent schools across the Canada, the US, and most recently Australia. The CES is the largest representative, reliable non-government dataset of graduate outcomes in those countries. It has been administered to nationally representative samples of 14- to 39-year olds in each country to measure them on a variety of educational and life outcomes—for a combined sample size of 18,001 respondents.

“Doubtless, there are areas to improve in Christian schools in the United States, Canada, and Australia,” says Dr. Albert Cheng, a Cardus senior fellow, assistant professor in the Department of Education Reform at the University of Arkansas, and a report co-author. “But the findings also show there is a reservoir of strength in these schools in all three countries. I hope this report sparks an international discussion that leads to improving education generally and Christian schools specifically.”

Many Educational Systems, A Common Good is freely available at cardus.ca.

About Cardus
Cardus is a non-partisan think tank dedicated to clarifying and strengthening, through research and dialogue, the ways in which society’s institutions can work together for the common good.