Reducing carbon emissions is the right thing to do, but goals and plans must not be developed abstractly 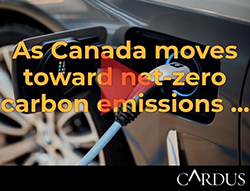 OTTAWA, ON – As the federal government develops net-zero carbon emissions plans, it needs to consider the people and places those plans would most affect: blue-collar, oil and gas workers concentrated in Alberta and Saskatchewan.

“Policy-makers must place the people and places affected at the centre of the policy-making process. They must ensure that the burden of climate action is broadly distributed and that the focus should be on lowering the emission intensity of the sector rather than abandoning resource development altogether,” concludes the new Cardus report, Fuelling Canada’s Middle Class. Sean Speer, a senior fellow at the University of Toronto’s School of Public Policy and Governance, and Brian Dijkema, vice-president of external affairs at Cardus, co-authored the report.

Fuelling Canada’s Middle Class makes clear that reducing carbon emissions is the right thing to do, but that policy-makers should not develop goals and plans abstractly. Meeting emissions goals will necessarily have implications for the natural-resources sector in general, and oil and gas in particular. Canada can’t afford the social and economic costs of blithely “transitioning” away from this sector.

According to Department of Natural Resources, the broader energy sector (including coal, utilities, and pipelines) directly employed almost 270,000 people and indirectly supported over 550,000 jobs in 2018. Total employment in the sector was almost 820,000 jobs.

The oil and gas sector is one of the few industries in which workers with no more than a high school diploma – representing a third of working-age Canadians – can access jobs with above-average incomes. When resource-sector industries lose jobs, the burden falls disproportionately on low and mid-skilled workers, affecting them at a rate nearly five times higher than workers in white-collar jobs. Emissions reduction policies that don’t account for this are fundamentally unjust.