This report from the 2018 Cardus Education Survey examines the school sector effect on how graduates of nongovernmental and public schools in the U.S think about their experiences in high school, including an assessment of their high school’s quality and climate, the relationships they formed there, and how well they felt prepared for key dimensions of adulthood, including university, career, and personal relationships. It is based on a representative survey of 1500 randomly selected American high school graduates (ages 24-39). The Cardus Education Survey includes a large number of controls for many factors in student development such as parental education, religion, and income, to isolate a school sector's particular impact.

The 2018 Cardus Education Survey (CES) marks nearly a decade’s worth of research into the effects of various school sectors on the academic, social, religious, and civic development of graduates in the United States. The Survey is now considered one of the most significant measures of nongovernment school outcomes. Cardus Education Survey reports capture the views from a representative sample of 1,500 randomly selected American high school graduates ages twenty-four to thirty-nine who were asked to complete a thirty-five- to forty-five-minute survey. The assessment comes at an important time—far enough away for these graduates to have had experiences in other educational institutions, in family and relationships, and in the workplace, and yet close enough to allow for some maturity, reflection, and recollection. The CES instrument includes a large number of controls for many factors in graduate development, such as parental education, religion, and income, in order to isolate a school sector’s particular impact (“the schooling effect”).1 Five smaller reports summarize the results of the 2018 survey.

They focus on particular outcomes and themes of interest, including the following: (1) education and career pathways; (2) faith and spirituality; (3) civic, political, and community involvement and engagement; (4) social ties and relationships; and (5) perceptions of high school.

One of the important contributions of the 2018 CES is to report on how graduates think about their experiences in high school, including an assessment of their high school’s quality and climate, the relationships they formed there, and how well they felt prepared for key dimensions of adulthood, including university, career, and personal relationships. Parents and graduates seem especially interested in understanding how graduates perceive their high school years, reflecting perhaps the concern with deeper aspects of happiness and well-being as an equally important dimension to academics of the high school years. These are often difficult and complicated years in the life of the student, sparking deep interest by parents and education researchers alike to better understand the connections between school culture and the wellbeing of students. For these reasons, the following measures of graduate perceptions form an important public barometer for the influence of the different school sectors. 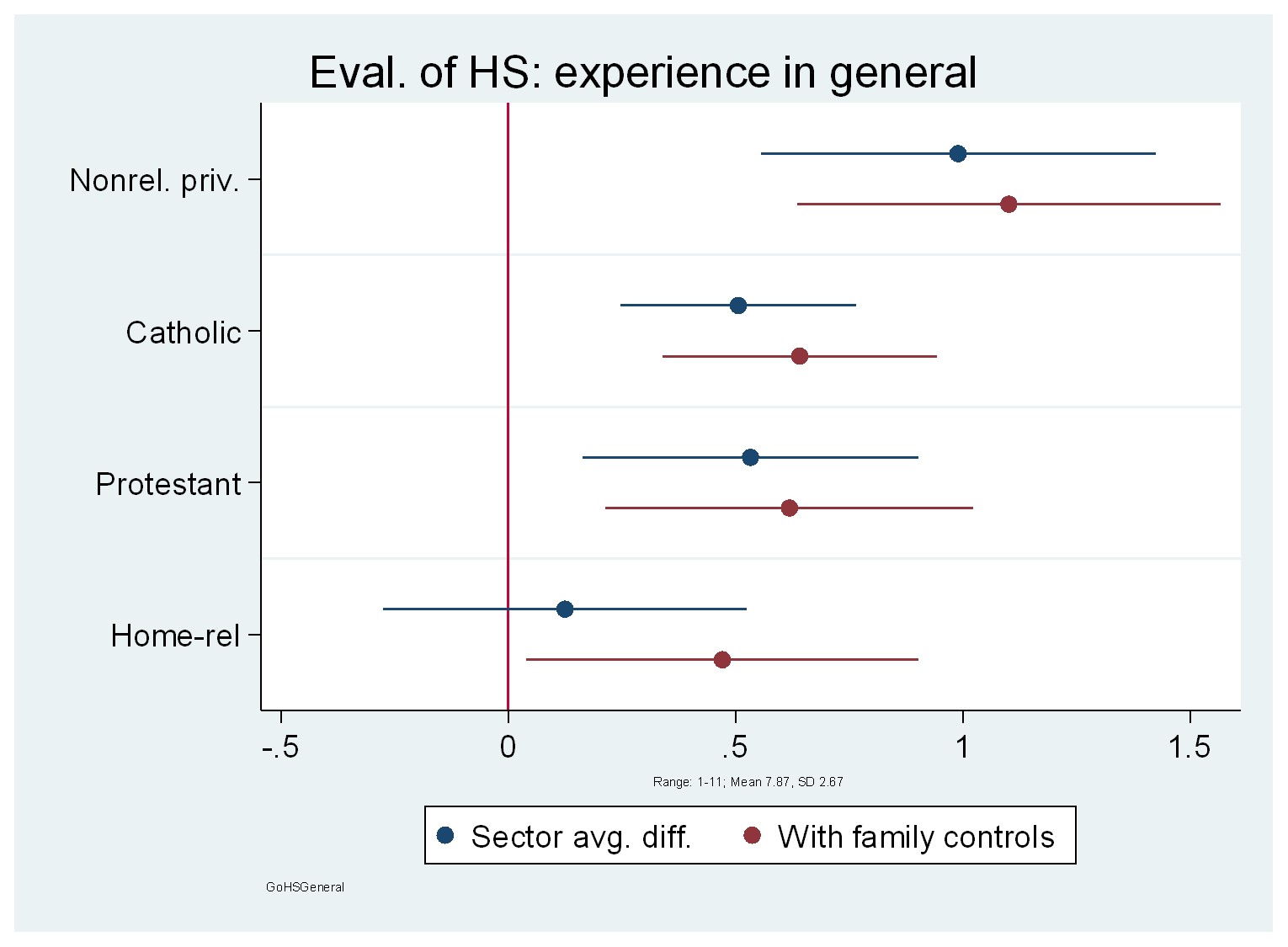 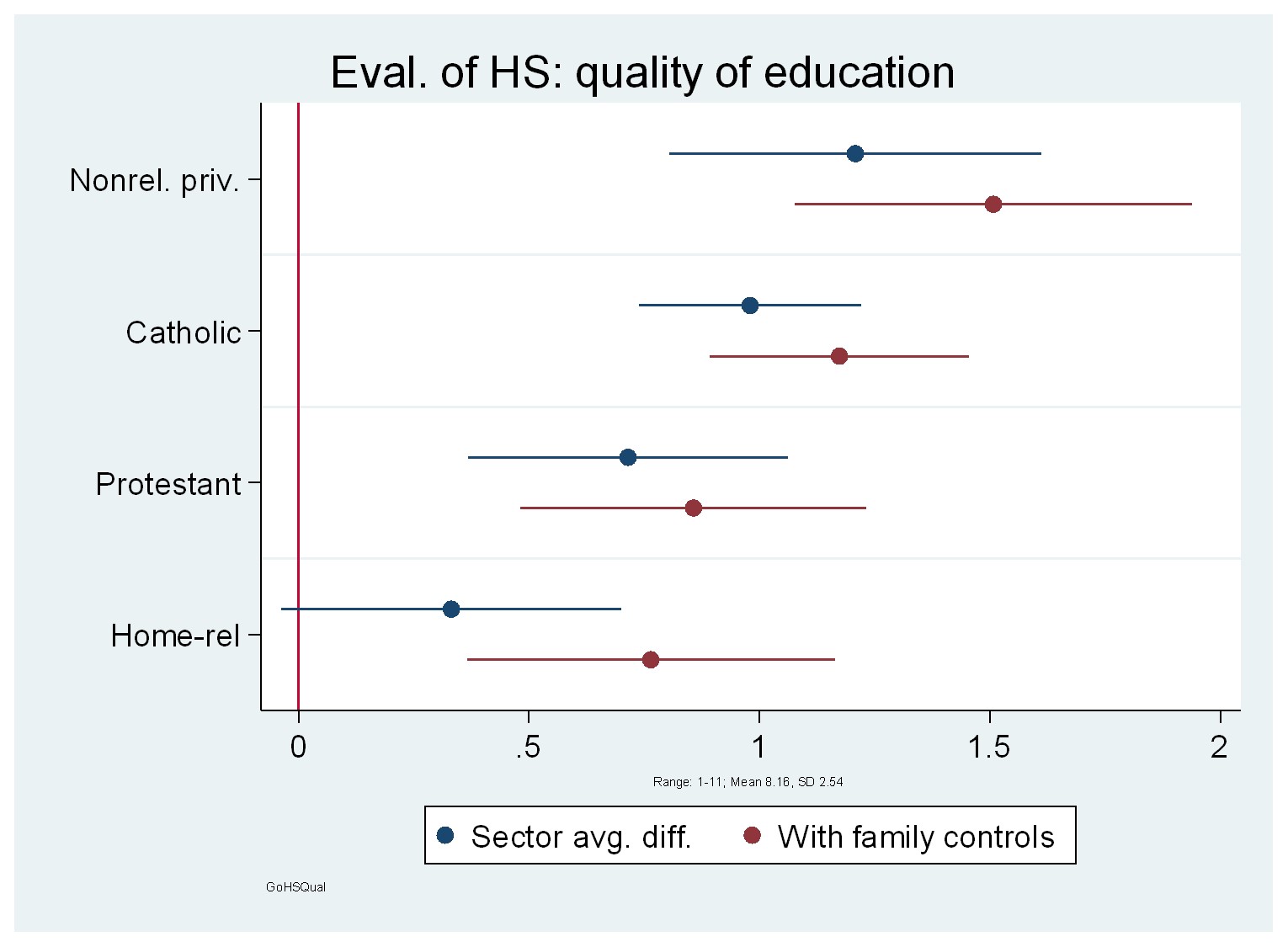 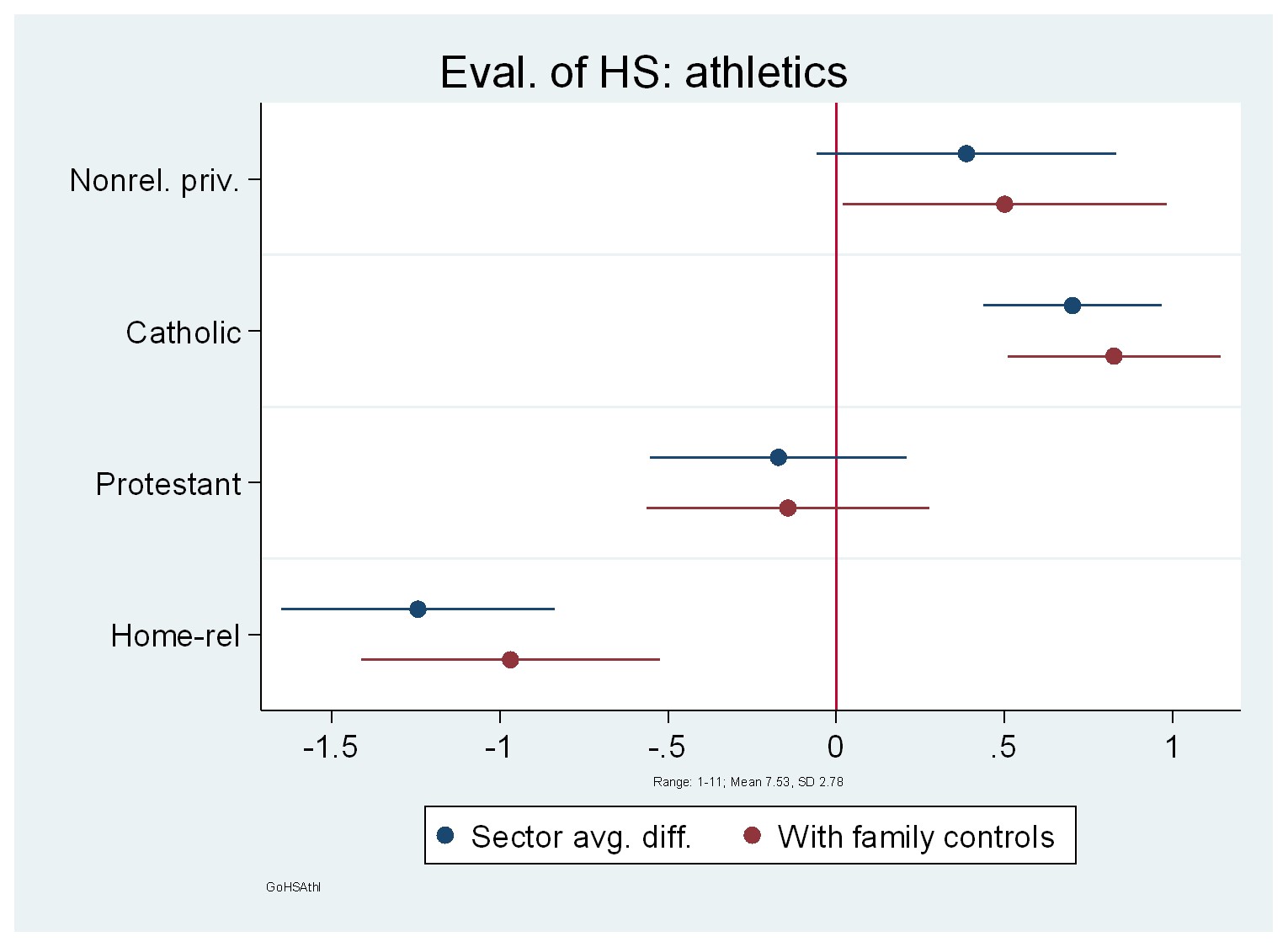 Relationships with Teachers, Other Students, and Preparation for the "Real World" 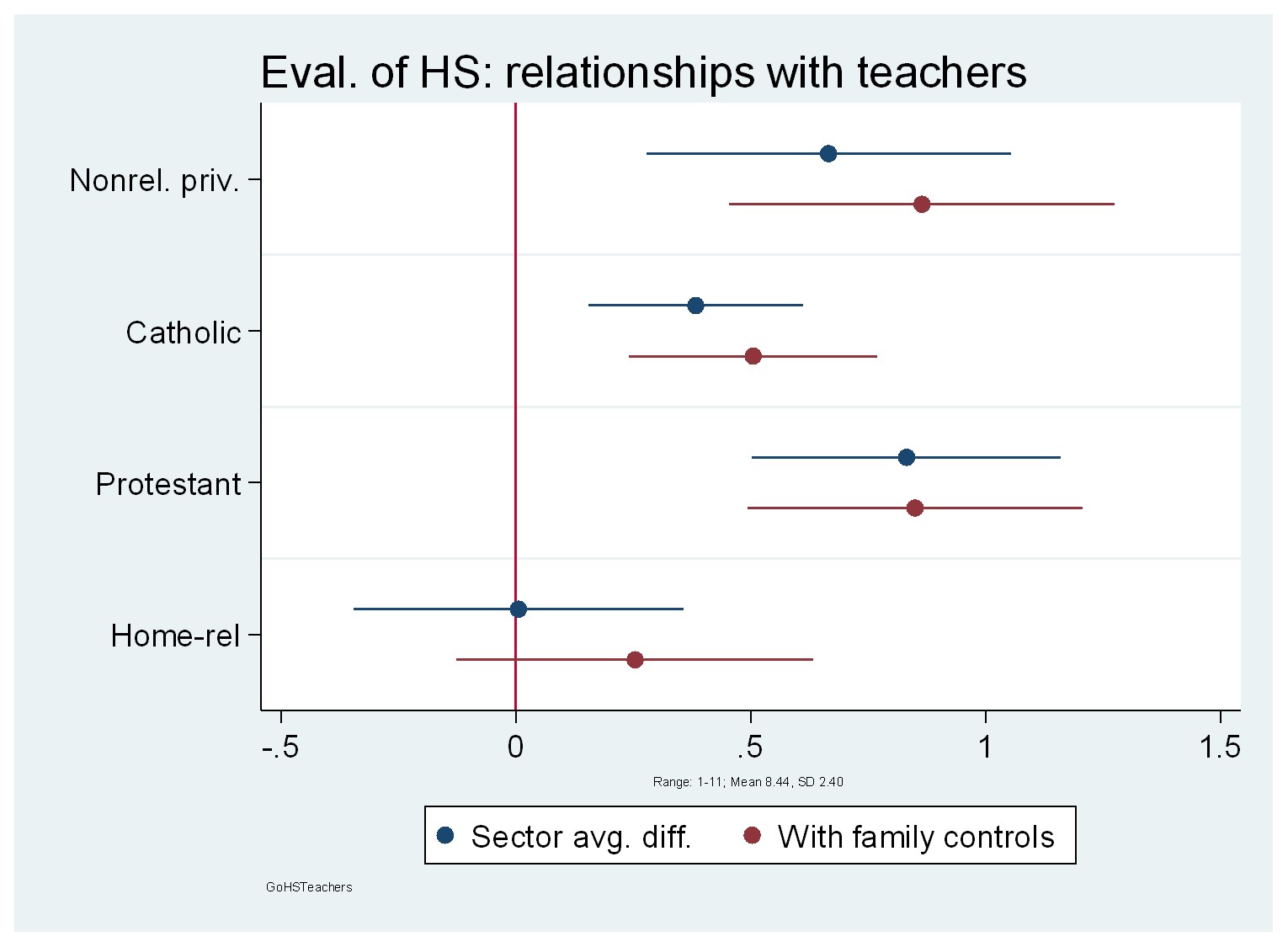 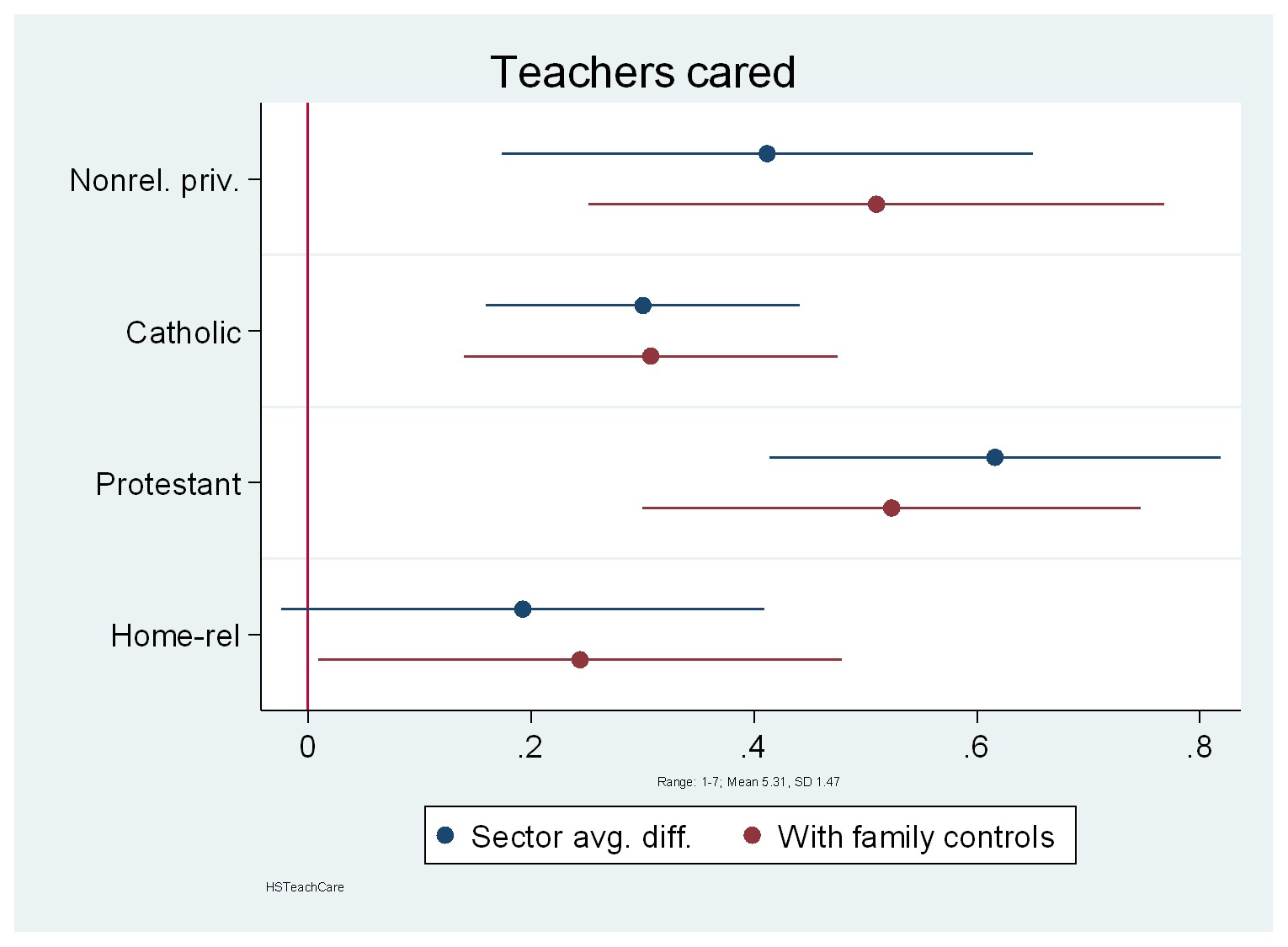 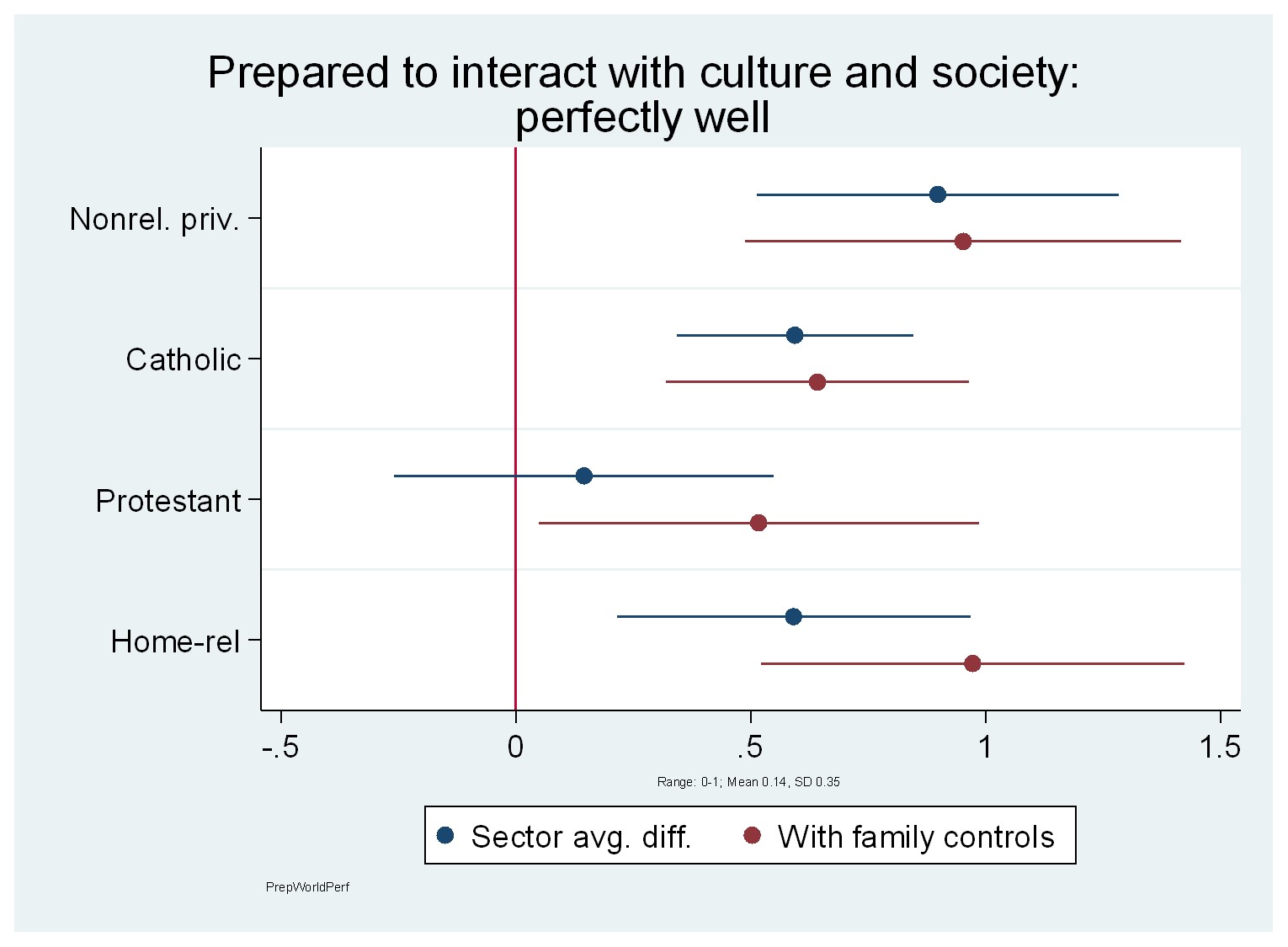 Relationships with other students are also reported to be very positive in private high schools. Similarly, private school graduates express much stronger agreement with the statement that their high school was “close-knit” than do public school graduates. The private school effects here are similarly high across all private school sectors, and well over half a standard deviation. The claim that students got along is also higher in the private school sectors, and while the Protestant and non-religious sectors appear to be most in agreement on this score, the private-school-sector differences are not significant.

Perceptions of Preparedness for University and Employment

Private schools—both religious and non-religious—take the lead in terms of how well perceived they are by graduates in a number of areas. Reflecting on their high school years, young adults who attended private schools have a much more favourable assessment of these years than do public school graduates—a finding with important public implications and worthy of deeper exploration in future research. They also feel better prepared for university or the job market. The relationship between school culture and outcome measures of success—not only on the academic end but also in other areas of well-being—is an area of increasing interest to parents, school administrators, and researchers alike.

Public school graduates have, on average, the least favourable perceptions of the quality of their schools and of the relationships within it. What are the conditions within the public school context that might be influencing these perceptions? Do these conditions spark the need for new approaches within the public school? And what does this suggest for the role of private schools in contributing to well-being and social and mental health outcomes? Certainly, the contrast of private-school- and public-school-graduate responses on many of these measures points to a number of important areas for future research. What we do know with some certainty at this point is that private school graduates are, on average, feeling much more positive about their high school experience than are public school graduates.

1) The 2018 CES respondents include 904 graduates who primarily attended public high schools, 83 respondents
who primarily attended non-religious private schools, 303 graduates of a Catholic high school, 136 graduates of an
evangelical Protestant school, and 124 who were homeschooled. In order to isolate the school effect for each of these sectors, the analysis includes a large number of control variables for basic demographics (gender, race and
ethnicity, age and region of residence), family structure (not living with each biological parent for at least sixteen
years, parents divorced or separated, not growing up with two biological parents), parent variables (educational level
of mother and father figure, whether parents pushed the respondent academically, the extent to which the respondent felt close to each parent figure), and the religious tradition of parents when the respondent was growing
up (mother or father was Catholic, conservative Protestant, conservative or traditional Catholic). A control was also
included for the number of years a private school graduate spent in public school. Despite our efforts to construct a
plausible control group, because families who send their children to religious schools or non-religious independent
schools make a choice, they may differ from those who do not exercise school choice in unobservable ways that are
therefore not accounted for in our study. Despite this, the CES use of an extensive survey instrument, together with
its comprehensive application of control variables and resulting patterns of outcomes, assures us with a 90 percentile confidence interval for each coefficient of the accuracy of our school sectoral outcomes.