The Niagara Region Council is planning to remove the exemption from developmental charges (D.C.) for places of worship under By-law 2017-98.

Cardus is a non-partisan think tank dedicated to clarifying and strengthening, through research and dialogue, the ways in which society’s institutions can work together for the common good.

The Niagara Region Council is planning to remove the exemption from developmental charges (D.C.) for places of worship under By-law 2017-98.1The current by-law exempts from development charges “that portion of a place of worship which is used exclusively as a place of worship for religious services and any reception and meeting areas used in connection with, or integral to the worship space.” The new proposed D.C. by-law contains no such exemption.2

The Niagara Region Council should maintain the current discretionary exemption for places of worship in the by-law for the following reasons:

The purpose of development charges is to help offset the capital costs that increase as a consequence of a new development or redevelopment. These capital costs serve the increased demands on municipal services such as policing and emergency services, healthcare, water, wastewater, and other services.

Useful comparisons to the development charge exemption are federal and provincial tax exemptions for places of worship and religious organizations. Under the federal Income Tax Act, registered religious charities are exempt from paying income tax. For the federal government, a permitted charitable purpose for religious charities includes “establishing and maintaining buildings for religious worship and other religious use”.3Provincially, Ontario’s Assessment Act (s. 3) exempts religious organizations from property taxes on land that is used in connection with worship. 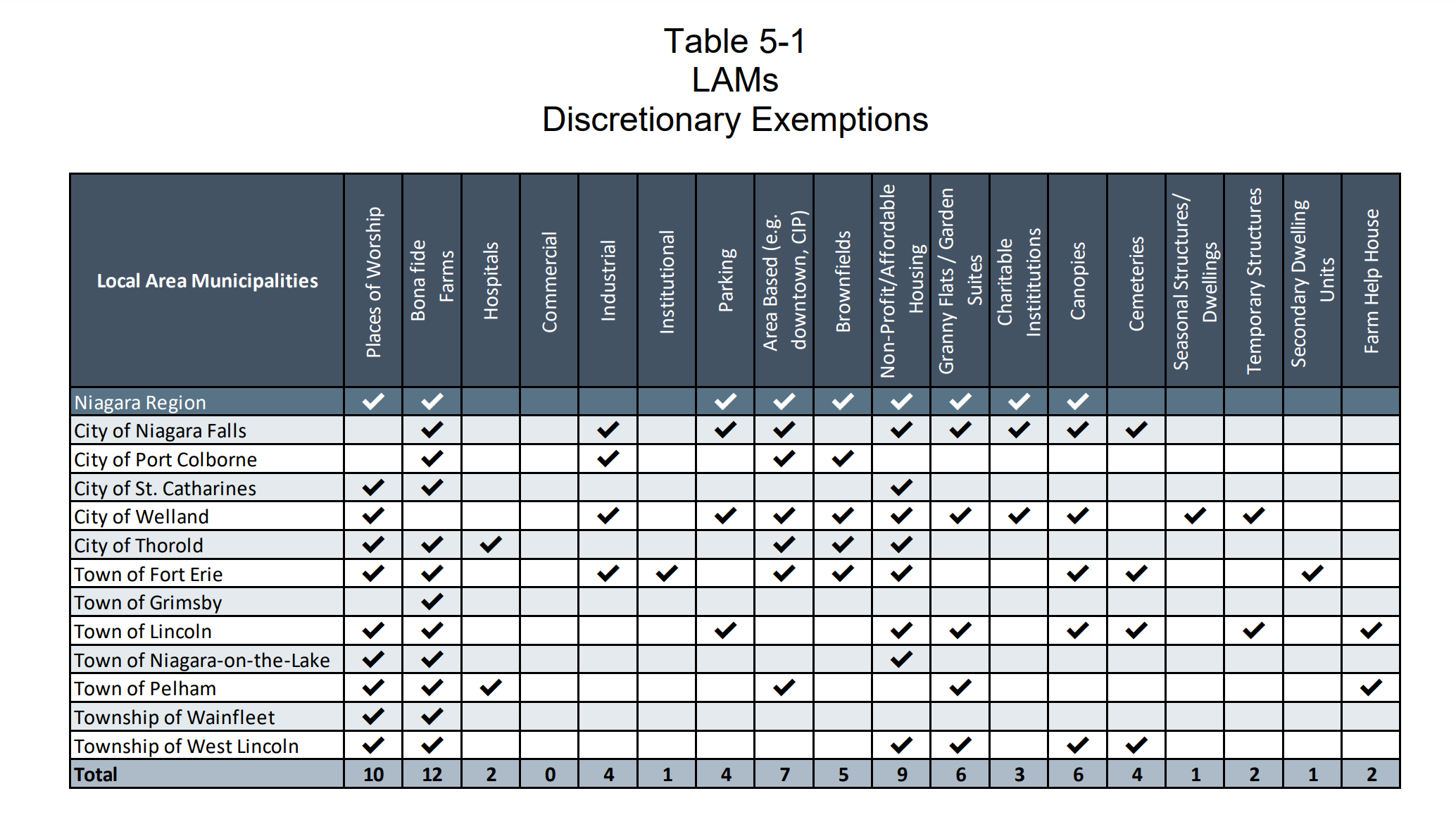 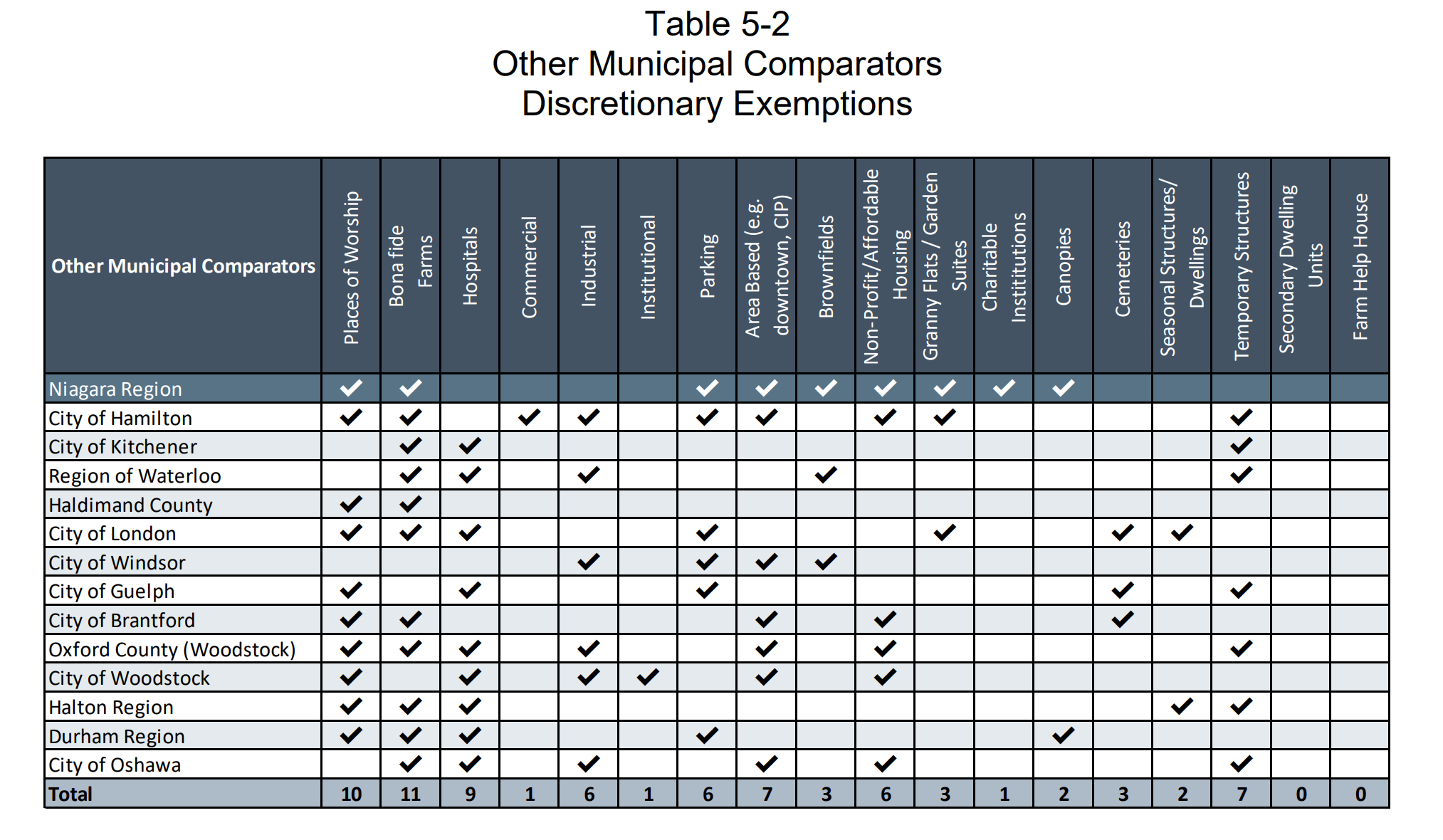 The approaches of other jurisdictions noted above recognizes the reality that religious organizations provide a public benefit. In fact, the federal income tax exemption for religious charitable organizations requires these groups to meet a public benefit test before qualifying.5Available data from March 2018 shows that 33,020 religious charities in Canada met the federal test. The Religious charitable category also contained the largest number of charities compared to other categories.6Looking at the charitable sector as a whole (which includes religious charities), Canada Helps reports that 11% of Canadians are dependent on charities to meet their basic needs including food and shelter. Charities spend 90% of their funds on programs and services, and the majority (58%) are run entirely by volunteers.7

Cardus has conducted research (the Halo Project8) to measure the socio-economic benefit that a religious congregation contributes to its local community. The value matrix quantifies a congregation’s economic contribution according to 41 variables grouped into seven broad areas:

Places of worship are not commercial institutions and do not generate a profit. Their outsized contributions to the common good are more than offset by the lost revenue that comes from these exemptions. According to the Halo Project calculations, for every $1.00 in a religious congregation's annual budget, a city gets an estimated $3.39 of benefits. Based on the available data, the total Halo Effect for municipalities in the Niagara Region is $141 million.

The lost (deferred) revenue of Niagara Region’s exemption for places of worship is a tiny fraction of the total spending on exemptions. Based on the available data, of the $31 million spent on discretionary and/or mandatory exemptions in the past seven years, only 1.2% was spent on places of worship.

This data show that the exemption for religious buildings is concentrated and sporadic. This means that removing the discretionary exemption for places of worship from the by-law will have a negligible impact on the Region’s finances on an annualized basis. However, the cost savings to a local place of worship (e.g. $384,000) would be significant for those congregants. This is especially true when considering that religious congregants bear the cost of financing new builds or redevelopments, often for years after the building is completed.

The takeaway is this: the cost of discretionary exemptions for places of worship are insubstantial for the Region’s balance sheet, but are a major additional cost on religious communities’ balance sheets. And that cost will have disproportionate, negative effects on the most vulnerable in your Region.

The Watson and Associates 2022 Development Charge Policy Report states that an “alternate approach to an exemption is to provide a grant program outside of the D.C. by-law.”15This suggests that if a discretionary exemption is removed for places of worship, Council could introduce a targeted grant program instead. Elsewhere, the Region notes that, “The majority of the grant programs…are not application based, meaning that they are automatic reductions that are available to a developer as long as they meet the definition of each development type.”16Given that the institutional structures for administering this exemption already exist, it would be duplicative and cost-intensive for the Region to create a granting program that is effectively identical.

Further, the default provision of an exemption to places of worship accomplishes two other goals. First, it provides stability and predictability to faith communities as they plan new capital projects. Communities can move ahead to meet new or growing needs without worrying about, or expending limited resources on grant applications. For members of Council, the default exemption de-politicizes the process. Members are not forced to choose between various faith communities (ex. exempting this mosque over that church), effectively picking winners and losers. Removing the standing exemption, with the intention of introducing a grant risks politicizing the exemption program and perpetuating inequities for minority religious communities.

Recommendation: Niagara Region Council should maintain the development charge exemption in the by-law for places of worship.