Cardus Education Survey 2018: From the Classroom to the Workplace

This report from the 2018 Cardus Education Survey examines the school sector effect on education and career outcomes for graduates of nongovernmental and public schools in the U.S. It is based on a representative survey of 1500 randomly selected American high school graduates (ages 24-39). The Cardus Education Survey includes a large number of controls for many factors in student development such as parental education, religion, and income, to isolate a school sector's particular impact.

The 2018 Cardus Education Survey (CES) marks nearly a decade’s worth of research into the effects of various school sectors on the academic, social, religious, and civic development of graduates in the United States. The Survey is now considered one of the most significant measures of nongovernment school outcomes. CES reports capture the views from a representative sample of 1,500 randomly selected American high school graduates ages twenty-four to thirty-nine who were asked to complete a thirty-five to forty-five-minute survey. The assessment comes at an important time—far enough away for these graduates to have had experiences in other educational institutions, in family and relationships, and in the workplace, and yet close enough to allow for some maturity, reflection, and recollection. The CES instrument includes a large number of controls for many factors in graduate development, such as parental education, religion, and income, in order to isolate a school sector’s particular impact (“the schooling effect”).1

Five smaller reports summarize the results of the 2018 survey. They focus on particular outcomes and themes of interest, including the following: (1) education and career pathways; (2) faith and spirituality; (3) civic, political, and community involvement and engagement; (4) social ties and relationships; and (5) perceptions of high school. In this report, we consider the educational and life pathways of students, beginning with course selection in high school and moving from there to educational choices after high school as well as employment and income outcomes and the occupational goals and life orientations of graduates. It is important to note that while this report focuses on academic and career outcomes, these varying pathways also demonstrate, to some extent, a variation of values and life orientations, and should not necessarily reflect a hierarchy of success. Indeed, increasingly there is evidence in society and in research literature alike of the negative effects of pursuing individual aims and goals when these are not balanced with communal values and responsibilities. The different life-pathways may reflect how different groups choose to balance these often-competing priorities, especially as they become older and weigh the needs of family life. Therefore, while reporting on these school-sector outcomes is helpful in uncovering patterns and trends, these outcomes should not necessarily be linked to normative ideas of success or happiness. Nevertheless, there is little denying that education and employment are important to providing stability, flexibility, and opportunity—and that these, in turn, are important to human flourishing within society.

The 2018 CES asks graduates a series of questions about the types of courses taken in high school, and whether these included advanced courses. Respondents were asked whether they took a math or science course, and whether they took Advanced Placement (AP) or International Baccalaureate (IB), as well as “dual credit” courses, which serve as both a college and high school credit. Of course, there are a number of factors, including school mission, curricular tracking, and resource constraints, as well as student interest, that may ultimately influence the likelihood that students take advanced courses. Averages for each school sector on course-taking therefore reflect the available offerings in schools as well as school encouragement, student guidance, and the percentage of students in a particular school that are able and willing to take these courses. 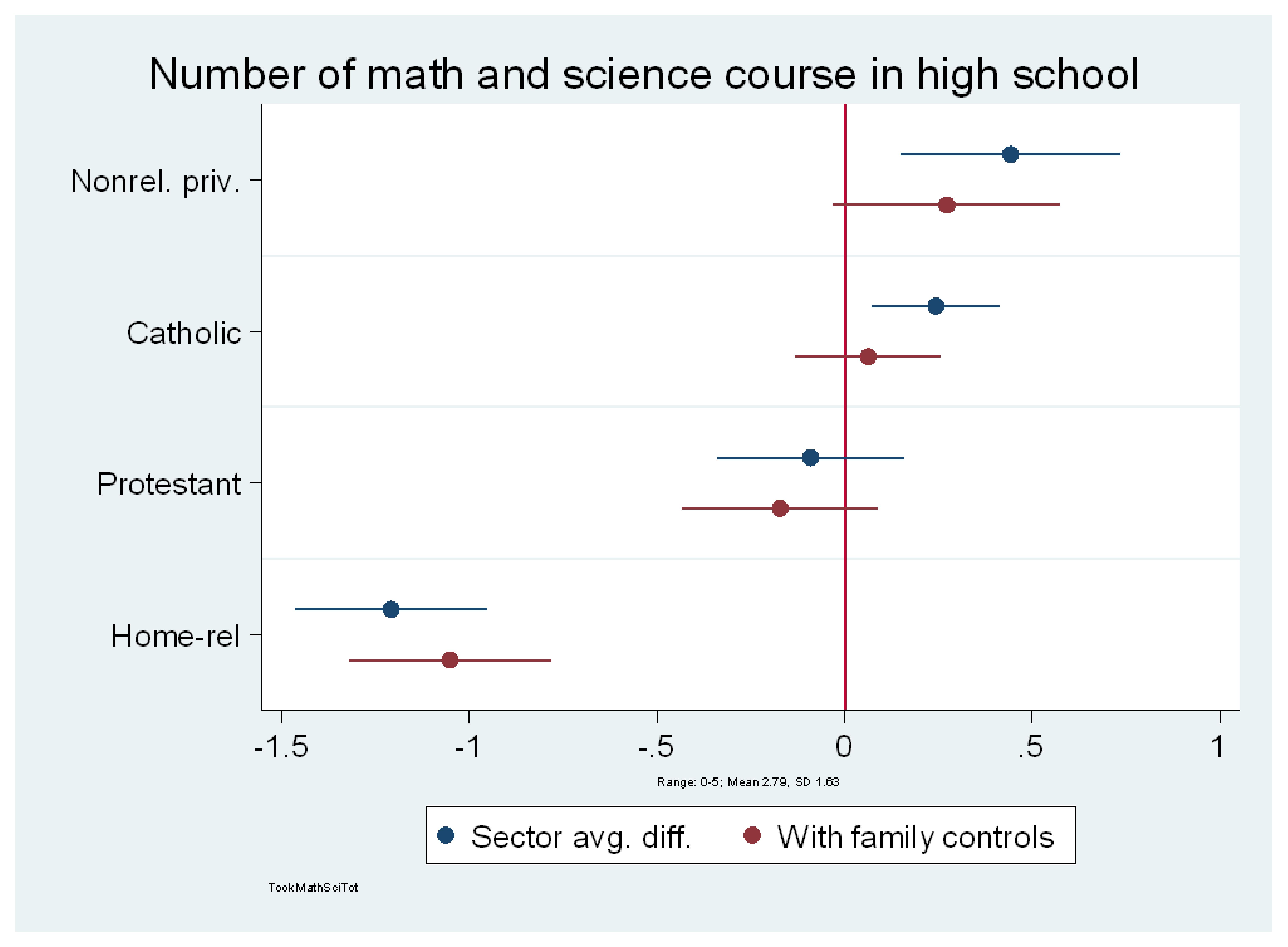 It is difficult to accurately measure the homeschool curriculum, but the findings seem plausible, if not definitive. Religious homeschool graduates are less likely to report taking any of the classes offered on the survey, including physics, calculus, and chemistry. The total number of math and science courses is over one less among homeschool graduates relative to public school graduates. 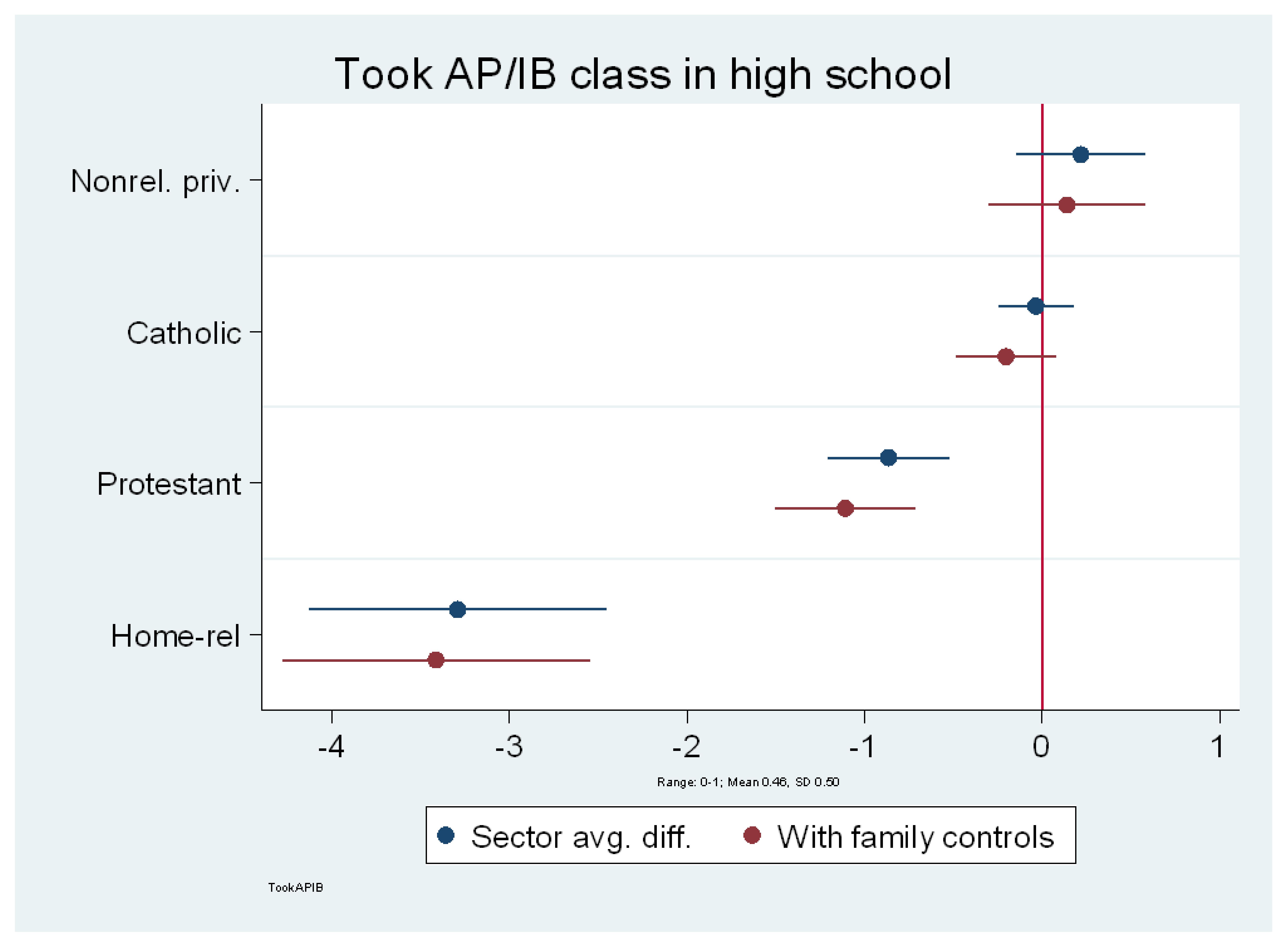 Similar to 2014 CES outcomes, the 2018 CES data reveal a relatively clear school sector hierarchy in terms of educational attainment with non-religious private schooling at the top, followed by the Catholic school sector, and then the public, Protestant, and religious home education sectors, though there are a number of important nuances to consider. 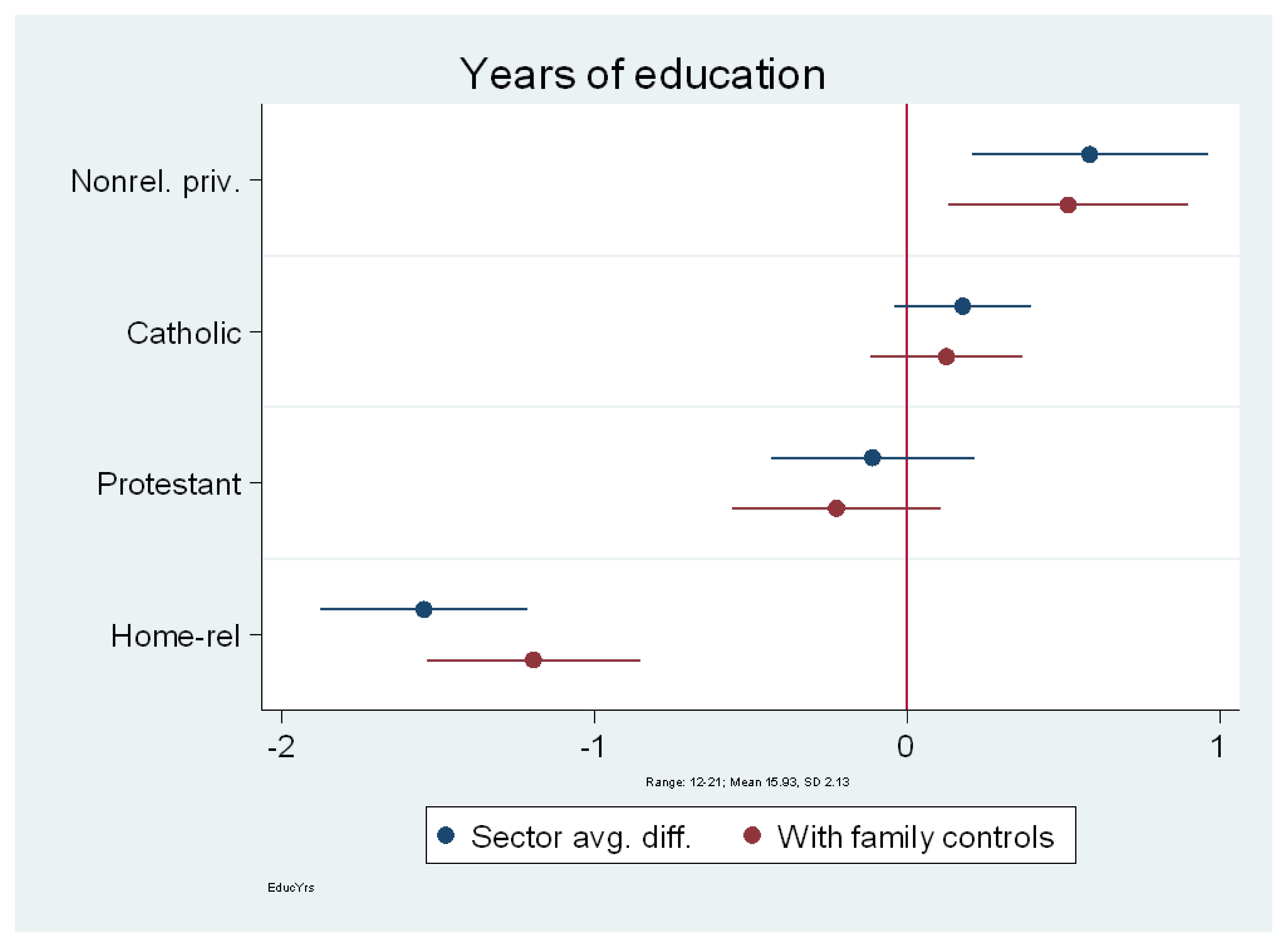 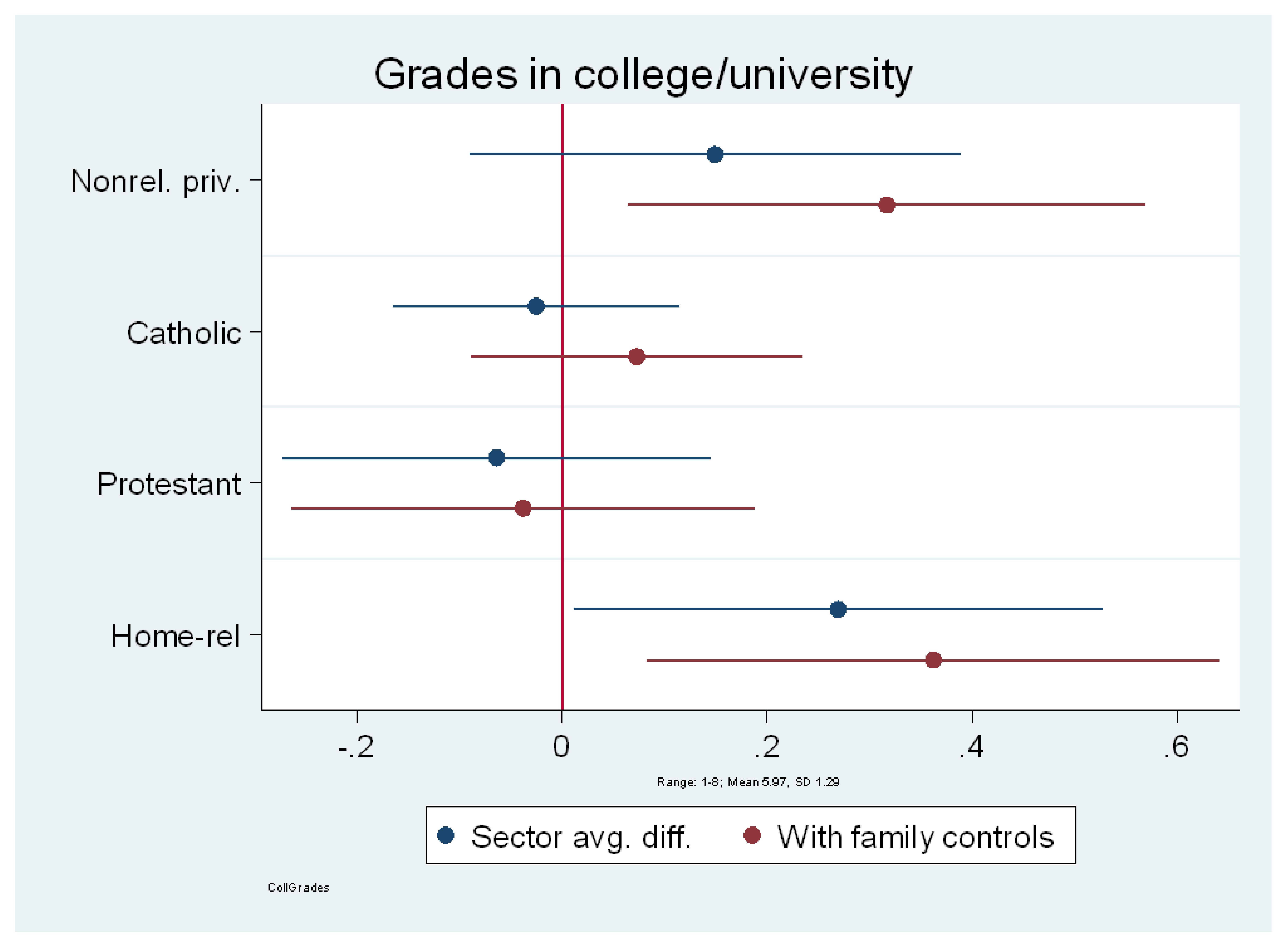 The 2018 CES asks respondents to report on their initial selection of a university major. The first major taken up in university may reflect the directions and goals that were fostered in high school, though the evidence for this relationship is mixed. Nevertheless, our survey findings hint at different orientations to occupation and career depending on school sector. For example, we do not find significant sectoral differences in the likelihood of choosing a business major, but education first majors are much less likely to have been chosen by Catholic school students and religious homeschool students, while Catholic and non-religious private school graduates are more likely to begin university studies in health care. In fact, non-religious private school graduates are about twice as likely as public school graduates to major in a health-care field when first starting out in university, and Catholic school graduates are not far behind. 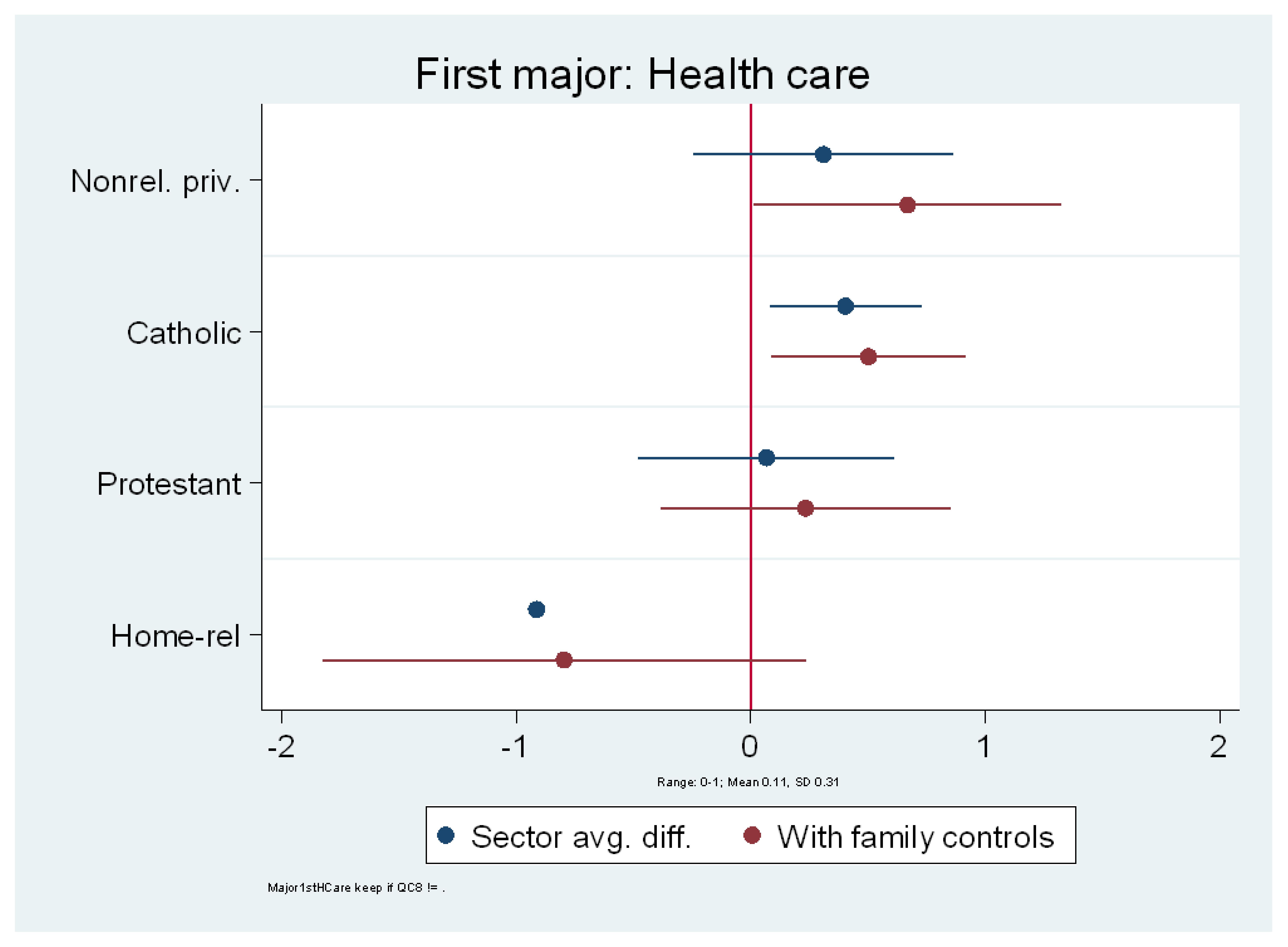 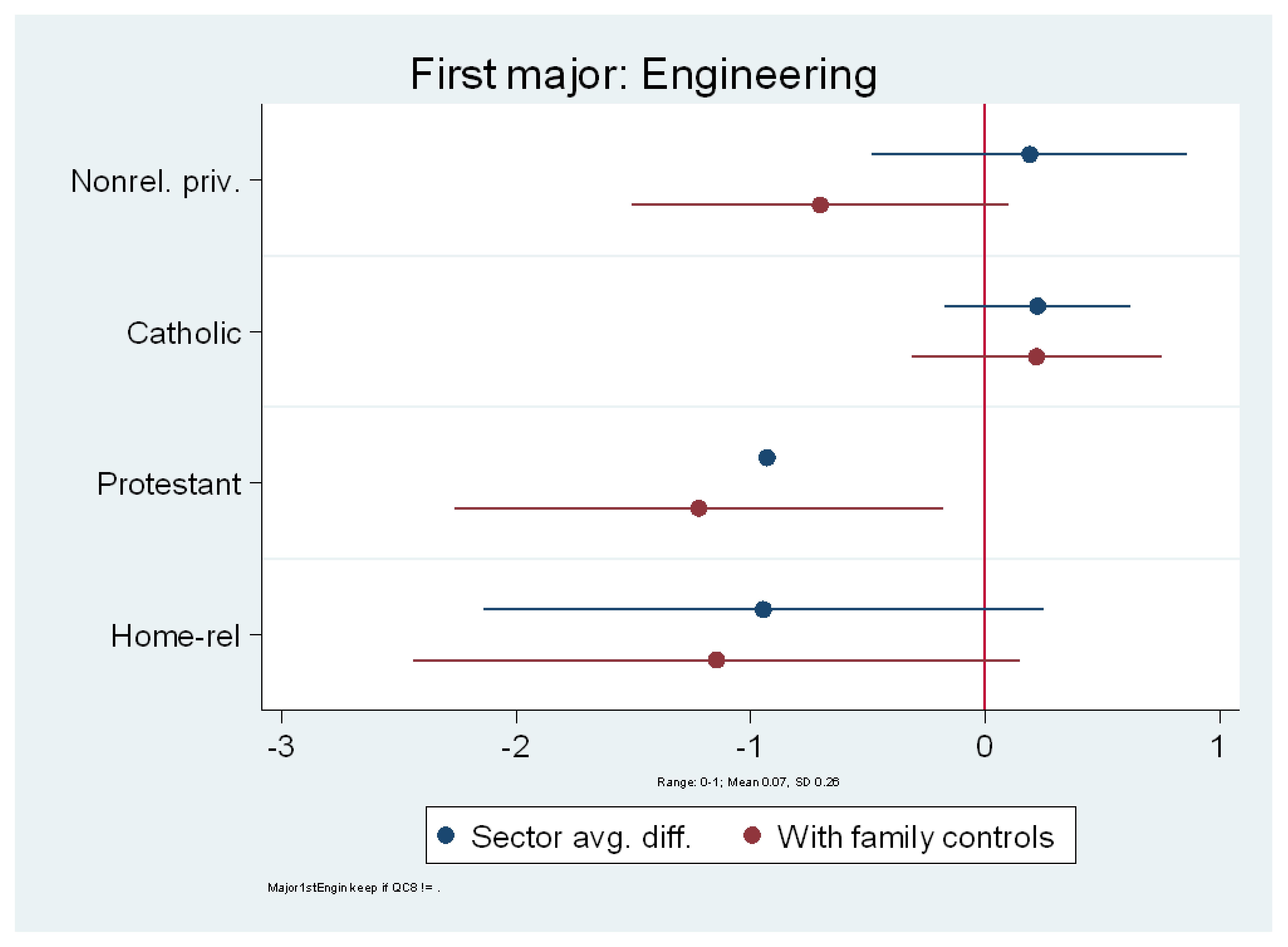 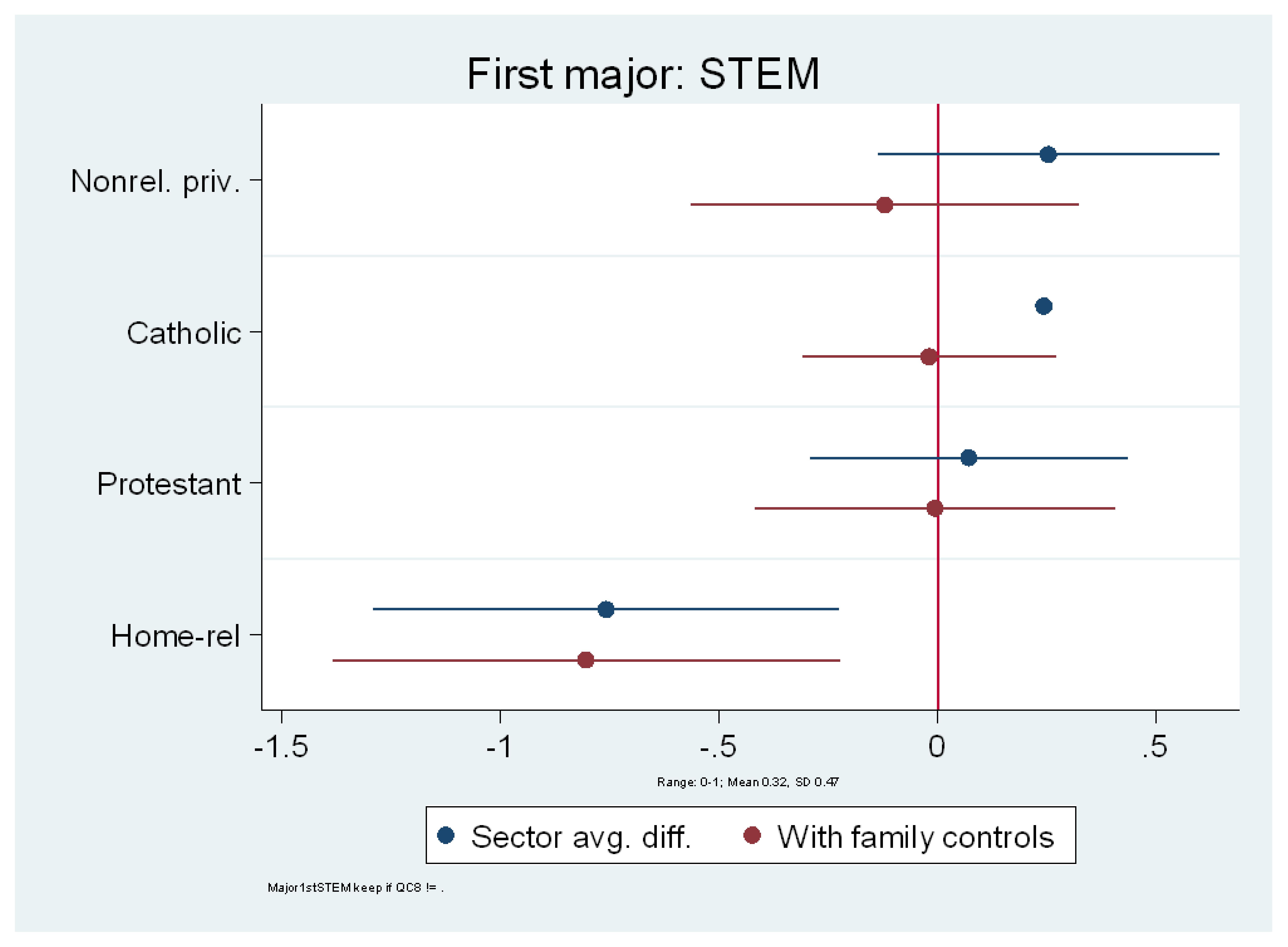 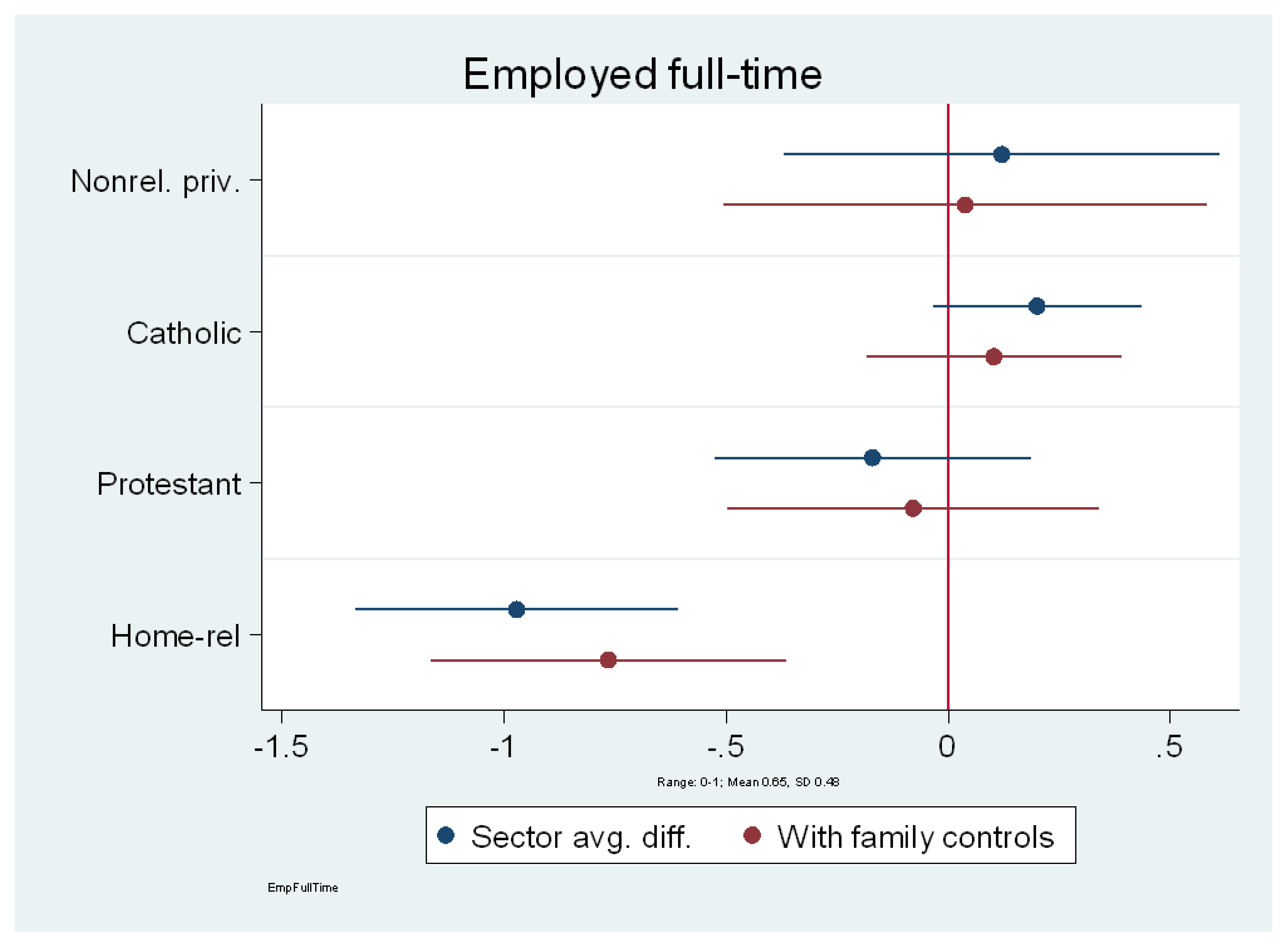 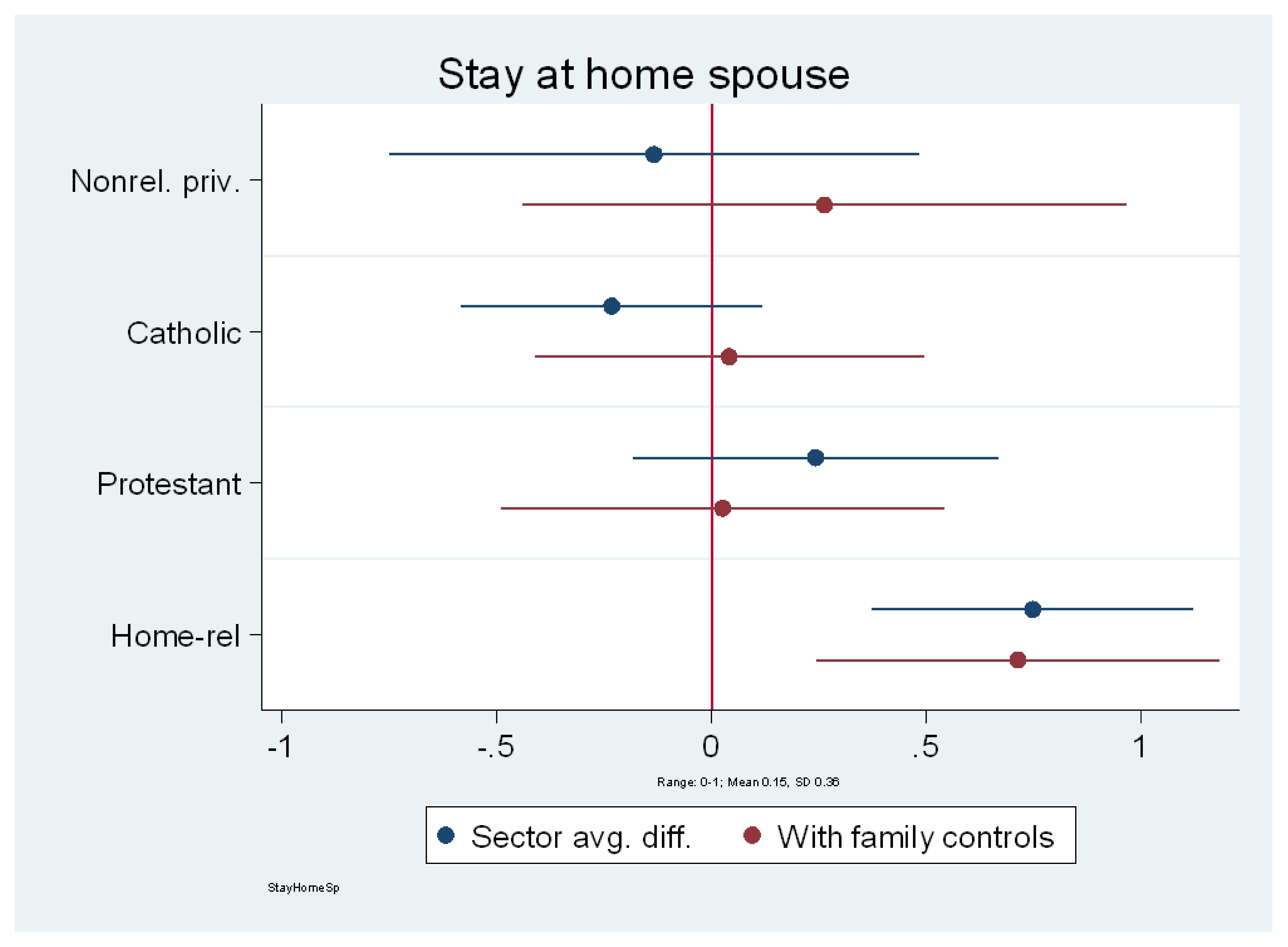 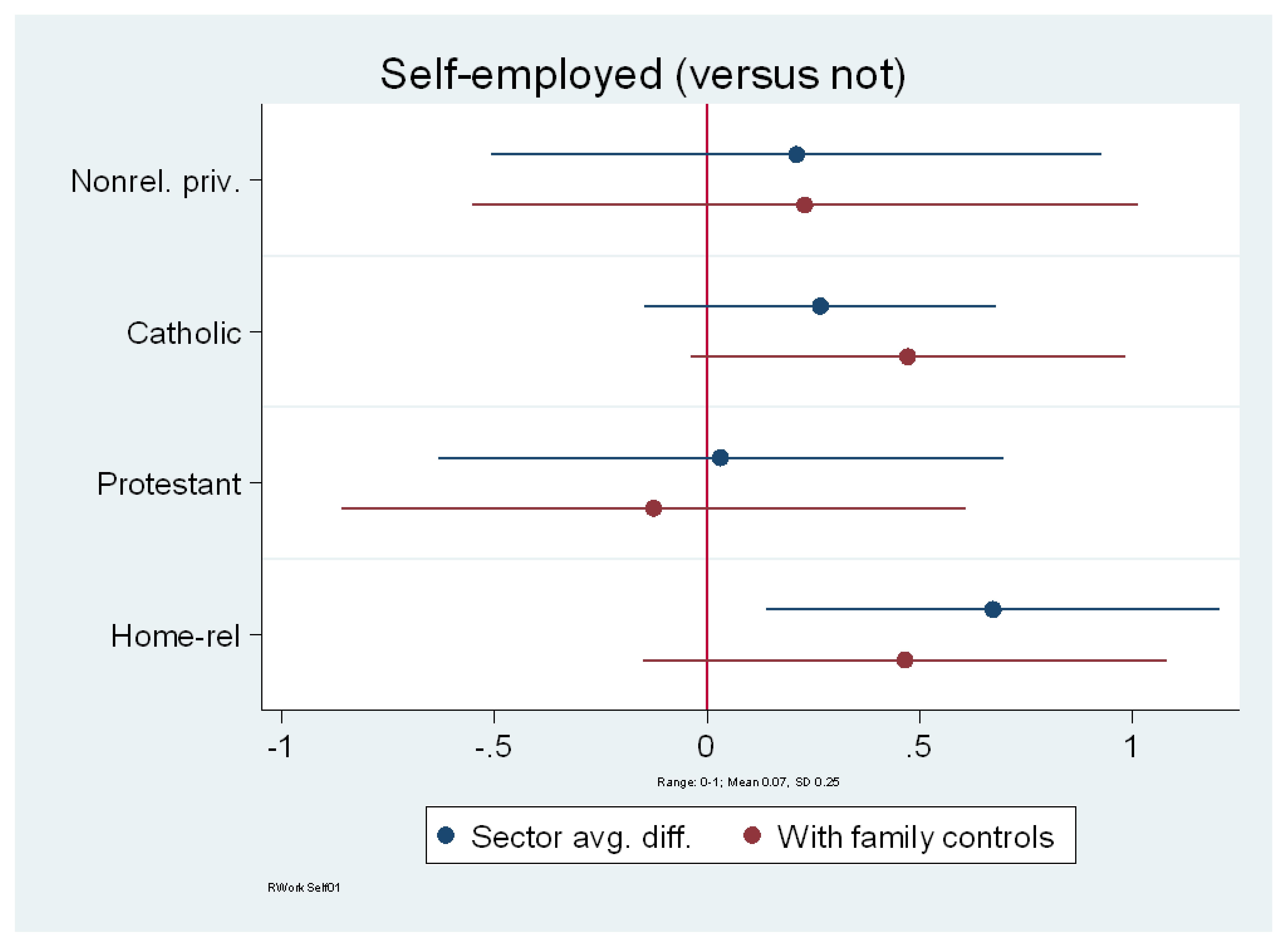 The 2018 CES next investigates the association between school sector and some of the major occupational classifications including business, education, health care, engineering, professional or scientific, and STEM fields. Non-religious private school graduates do not tend to cluster in any particular industry, but clear differences emerge between this school sector and others in terms of level of employment. Non-religious private school graduates are much more likely to hold a position as a manager, supervisor of staff, director, or executive. In fact, they are twice as likely as public school graduates to report this type of employment than they are to report being an “experienced/ non-manager employee.” Surprisingly, they are also more likely to report occupying an “entry-level” position rather than an experienced non-manager position. This may reflect the kind of jobs taken up by non-religious private school graduates, which could include entry-level positions in companies and occupations with steep internal career ladders (e.g., a corporate law firm or an investment banking company). Still, the important finding is that private non-religious school graduates are likely in executive and managerial positions rather than any of the alternatives, which is not the case for any of the other school sectors. 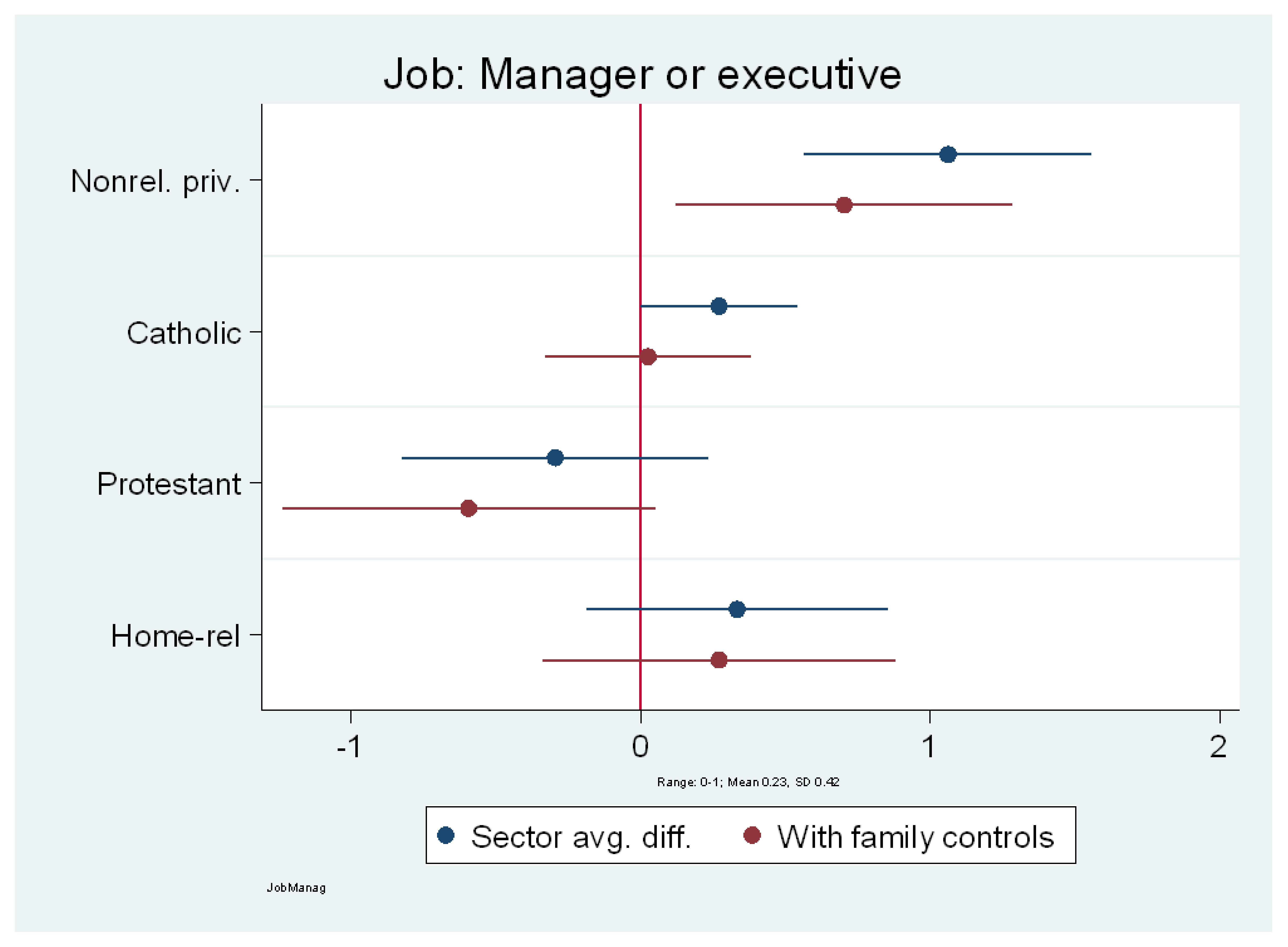 The homeschooling sector is marked by a lot of variation. Religious homeschool graduates are likely to be found in entry-level as well as managerial or executive positions. These effects are not statistically significant after controls, but are highly suggestive of homeschooling effects. Though we do not have detailed information on various types of entry-level positions, it is reasonable to assume that homeschool graduates are nearly bifurcated in their relation to the job market—some holding relatively low-paying jobs with fewer opportunities for advancement while many others are in managerial roles. 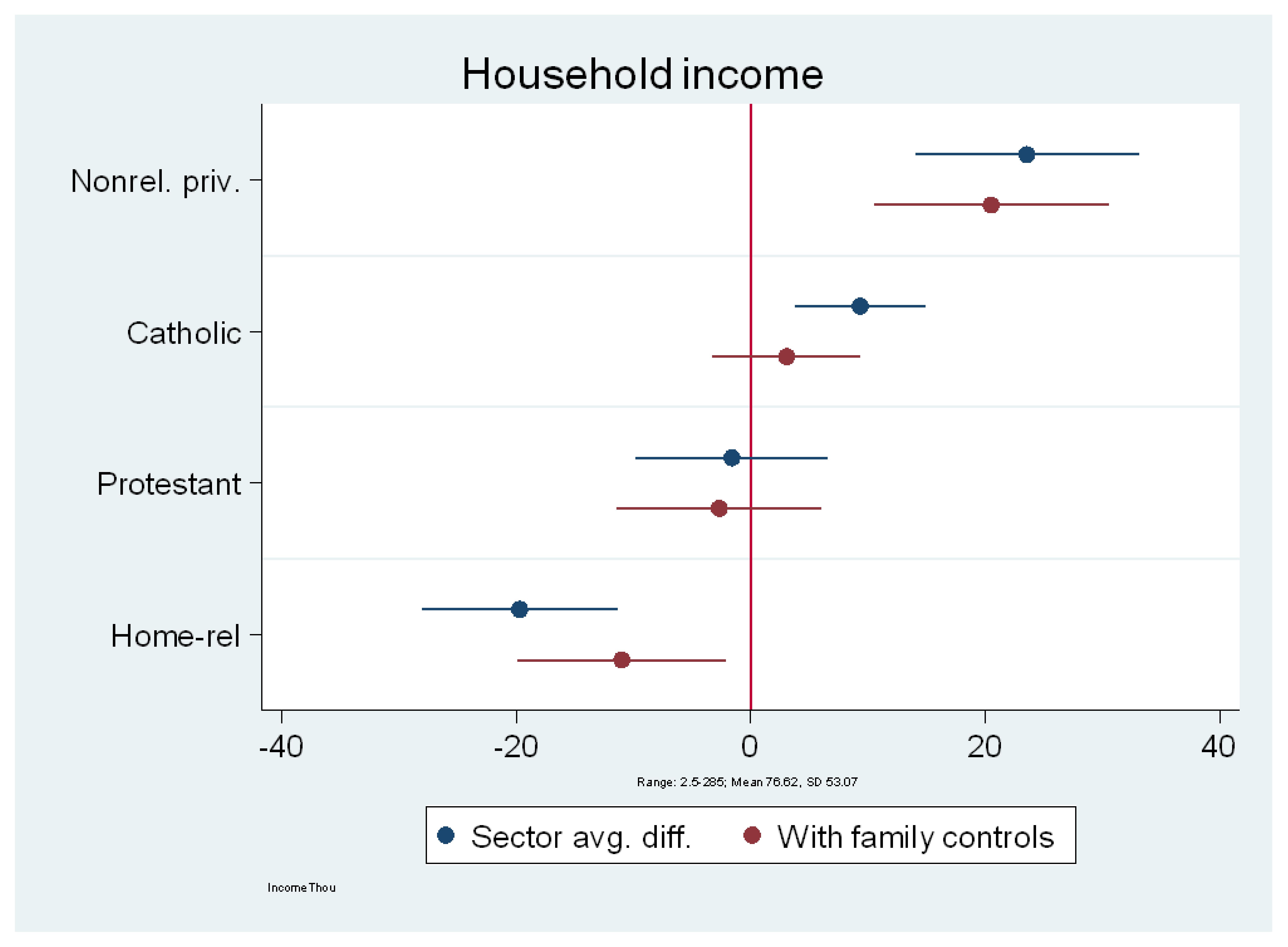 The 2018 CES data demonstrates that school sector has an important relationship to life pathways and the choices being made by graduates. In terms of educational attainment, occupation, and income, our analysis of the data reveals substantial school-sector effects. The association between non-religious private schooling and social stratification is evident in the CES findings; this school sector is associated with greater educational attainment, managerial or executive positions, and much higher income. Though this sector represents a relatively small portion of the private school population, they continue to carry the torch on these measures. Catholic school graduates also attain higher educational and occupational outcomes than do public school graduates. Protestant school graduates are not as likely to pursue advanced degrees relative to public school graduates and are more likely to pursue occupations in health care. Religious homeschool graduates have substantially lower levels of education and appear to have a more tenuous relationship to the job market, though there seems to be wide variation here. This likely reflects a life orientation that focuses on practical outcomes, such as preparing for a job while keeping costs reasonable and attending a local postsecondary institution.

While the 2018 CES data shows some strong connections between school sector and educational and occupational outcomes, it is also important to note that the school sectors themselves are not bounded and stuck in time, but rather understood as part of a community, and are constantly in flux as they seek improvement and adjust to the changing conditions that surround them. For example, declining enrollment in Catholic schooling may tilt this sector more strongly toward the college prep model of the private non-religious schools. The homeschooling sector continues to grow, which could change the average orientation of the homeschooling sector toward education and work. The evangelical Protestant sector has witnessed recent efforts to improve academic outcomes. With the possible exception of the Christian Reformed schools, evangelical Protestant schools have been more strongly oriented to religious community and spiritual formation, but in the recession of 2008, many smaller and likely more conservative evangelical Protestant schools closed down. This shift in the composition of the Protestant sector may have longer-term consequences on the educational outcomes of its graduates. While meaningfulness, happiness, and success should not be measured by educational, occupational, and income outcomes alone, the CES nevertheless provides important insight into the life pathways commonly pursued by graduates of the various school sectors.

1) The 2018 CES respondents include 904 graduates who primarily attended public high school, 83 respondents who primarily attended non-religious private school, 303 graduates of a Catholic high school, 136 graduates of an evangelical Protestant school, and 124 who were homeschooled. In order to isolate the school effect for each of
these sectors, the analysis includes a large number of control variables for basic demographics (gender, race and ethnicity, age, and region of residence), family structure (not living with each biological parent for at least sixteen years, parents divorced or separated, not growing up with two biological parents), parent variables (educational level of mother and father figure, whether parents pushed the respondent academically, the extent to which the respondent felt close to each parent figure), and the religious tradition of parents when the respondent was growing up (mother or father was Catholic, conservative Protestant, conservative or traditional Catholic). A control was also included for the number of years a private school graduate spent in public school. Despite our efforts to construct a plausible control group, because families who send their children to religious schools or non-religious independent schools make a choice, they may differ from those who do not exercise school choice in unobservable
ways that are therefore not accounted for in our study. Despite this, the CES use of an extensive survey instrument, together with its comprehensive application of control variables and resulting patterns of outcomes, assures us with some confidence of the accuracy of our school sectoral outcomes.