This report from the 2018 Cardus Education Survey examines the school sector effect on civic and political participation for graduates of nongovernmental and public schools in the U.S. It is based on a representative survey of 1500 randomly selected American high school graduates (ages 24-39). The Cardus Education Survey includes a large number of controls for many factors in student development such as parental education, religion, and income, to isolate a school sector's particular impact.

The 2018 Cardus Education Survey (CES) marks nearly a decade’s worth of research into the effects of various school sectors on the academic, social, religious, and civic development of graduates in the United States. The Survey is now considered one of the most significant measures of nongovernment school outcomes. CES reports capture the views from a representative sample of 1,500 randomly selected American high school graduates ages twenty-four to thirty-nine who were asked to complete a thirty-five to forty-five-minute survey. The assessment comes at an important time—far enough away for these graduates to have had experiences in other educational institutions, in family and relationships, and in the workplace, and yet close enough to allow for some maturity, reflection, and recollection. The CES instrument includes a large number of controls for many factors in graduate development, such as parental education, religion, and income, in order to isolate a school sector’s particular impact (“the schooling effect”).1

Five smaller reports summarize the results of the 2018 survey. They focus on particular outcomes and themes of interest, including the following: (1) education and career pathways; (2) faith and spirituality; (3) civic, political, and community involvement and engagement; (4) social ties and relationships; and (5) perceptions of high school.

One of the important contributions of the 2018 CES is to report on how graduates from the various school sectors are participating in public life. The following report summarizes these findings into five categories: trust, political views and orientations, political engagement, civic views, and civic engagement and volunteerism. These findings provide significant nuance to our understanding of how graduates contribute to public life, citizenship, and the common good by offering a deeper understanding of how graduates from the various school sectors consider and balance obligations to their community and the nation. These measures also get at something beyond politics; they say something about how graduates live within a shared civil society and how they are involved in the life of their community, how they work toward the common good, and their capacity to love their neighbours.

Citizenship, volunteerism, and civic and political engagement is about building the social infrastructure of society; the middle layers between the state and the individual. These activities occur in public spaces where families worship and gather and children go to school, as well as the community centres and local youth shelters. These are the spaces where “civicness” is strengthened and thick community is built, where people come together regardless of their possible divisions and work toward something in common. The 2018 CES seeks to understand how the various school sectors influence these important civic virtues and orientations, and includes a number of questions on trust, political and civic orientation, civic engagement, and volunteerism.

The precipitous decline in trust is a recent and troubling trend in the United States. Richard Edelman, president and CEO of the Edelman firm, which conducts the international “Edelman Trust Barometer,” notes that the steep decline in trust was “happening at a time of prosperity, with the stock market and employment rates in the U.S. at record highs.”2 This is unusual. Increased distrust usually follows calamities of foreign policy or economic recession. Nevertheless, today only one-third of Americans trust their government to do what is right, which is a 14 percent decline from last year. Only 42 percent trust the media, and the general trust in business and in NGOs has decreased by nearly 10 percentage points each.3 New York Times columnist David Brooks writes, “The pervasive atmosphere of distrust undermines actual intimacy, which involves progressive self-disclosure, vulnerability, emotional risk and spontaneous and unpredictable face-to-face conversations.”4 The lack of trust is part of the path to social isolation, and the path of social isolation leads to ill health for individuals and societies. 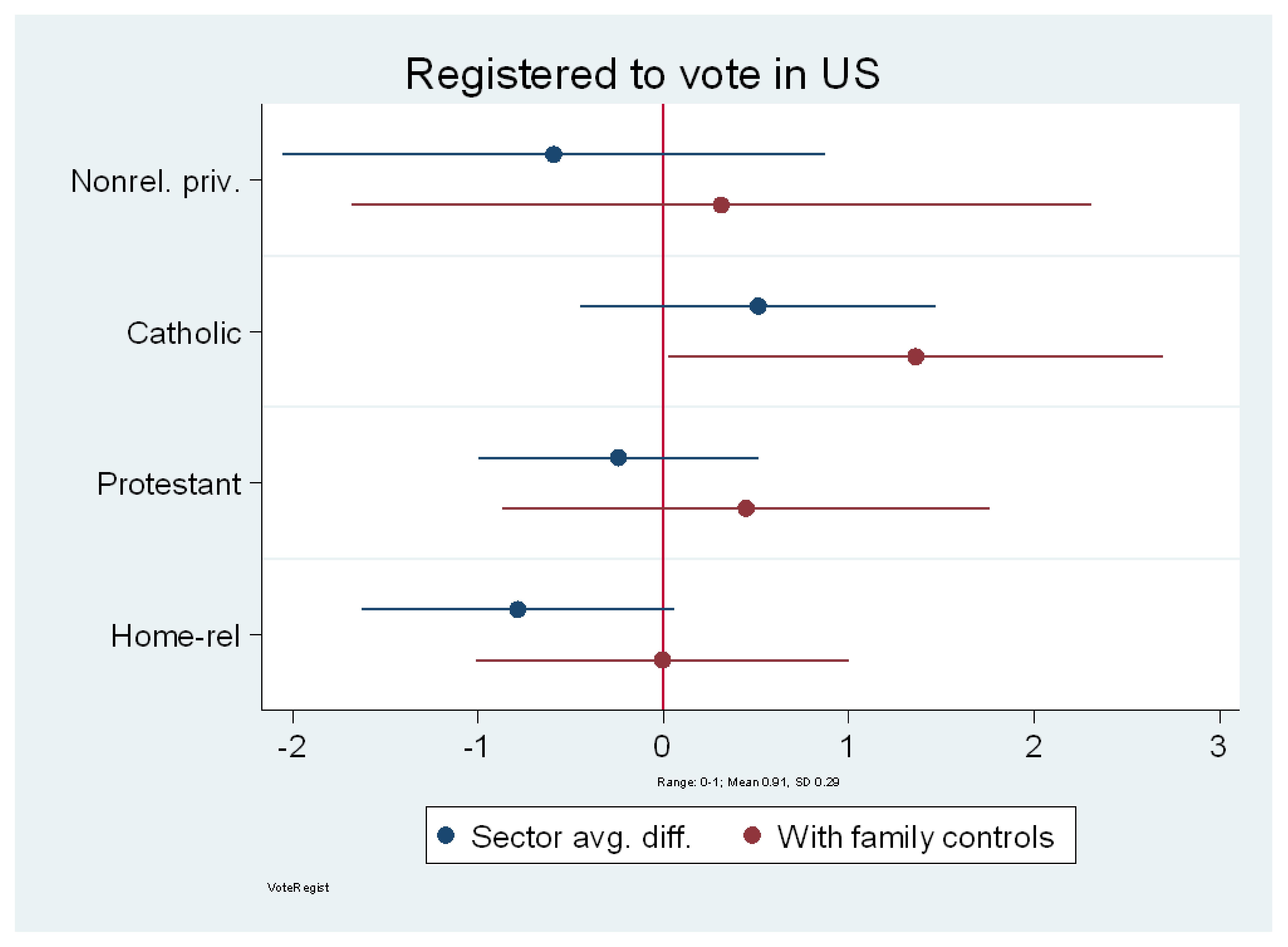 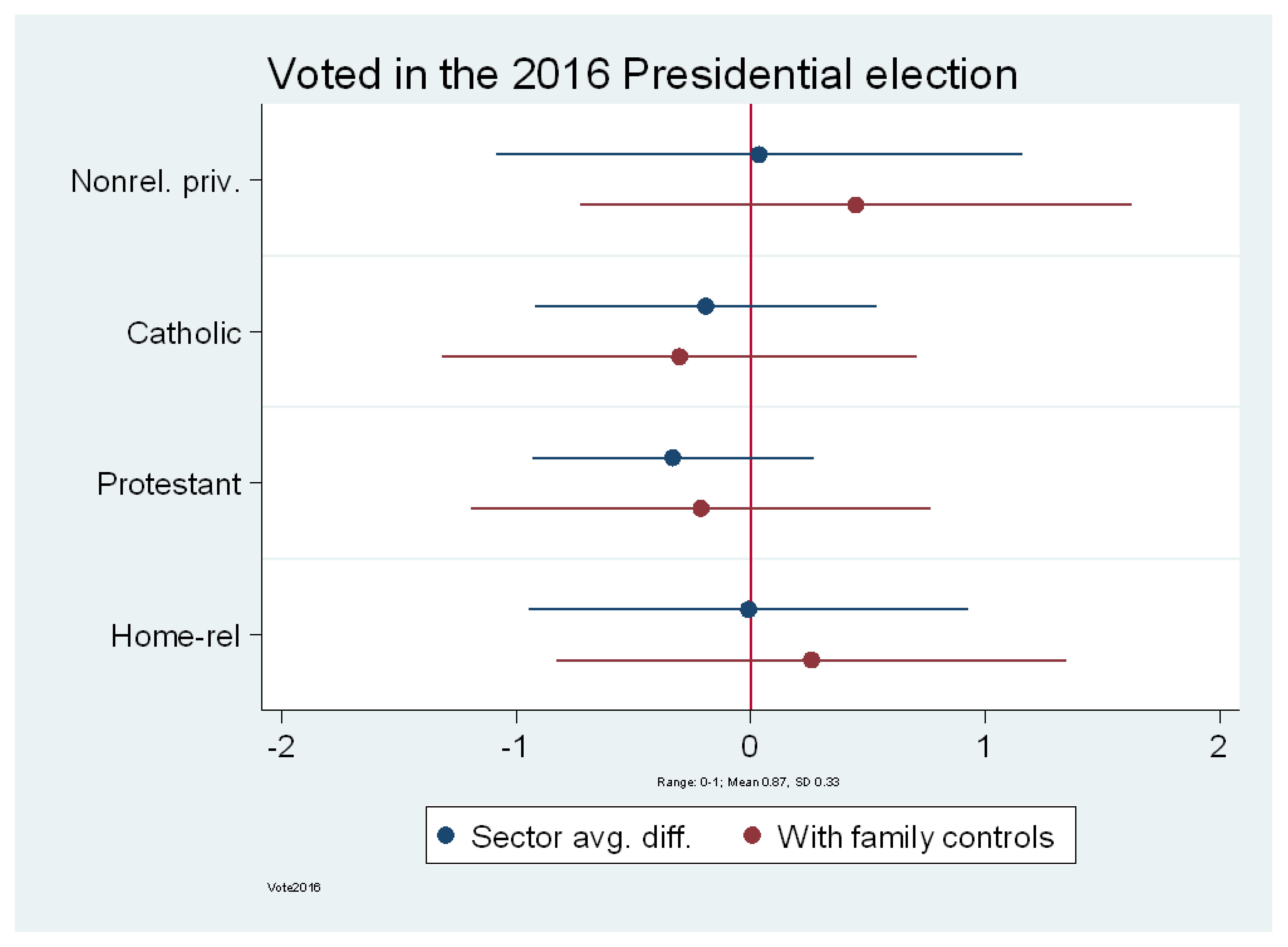 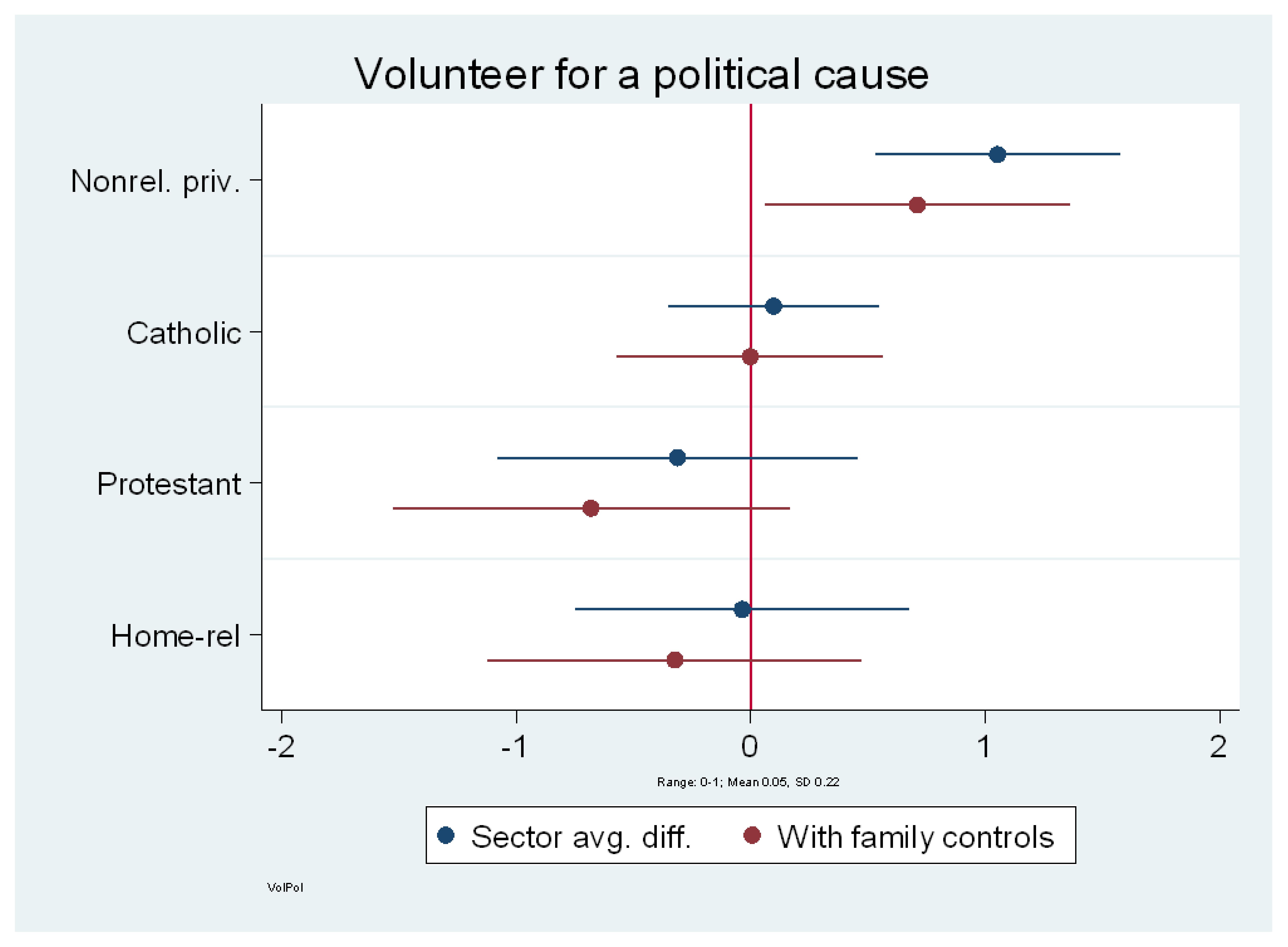 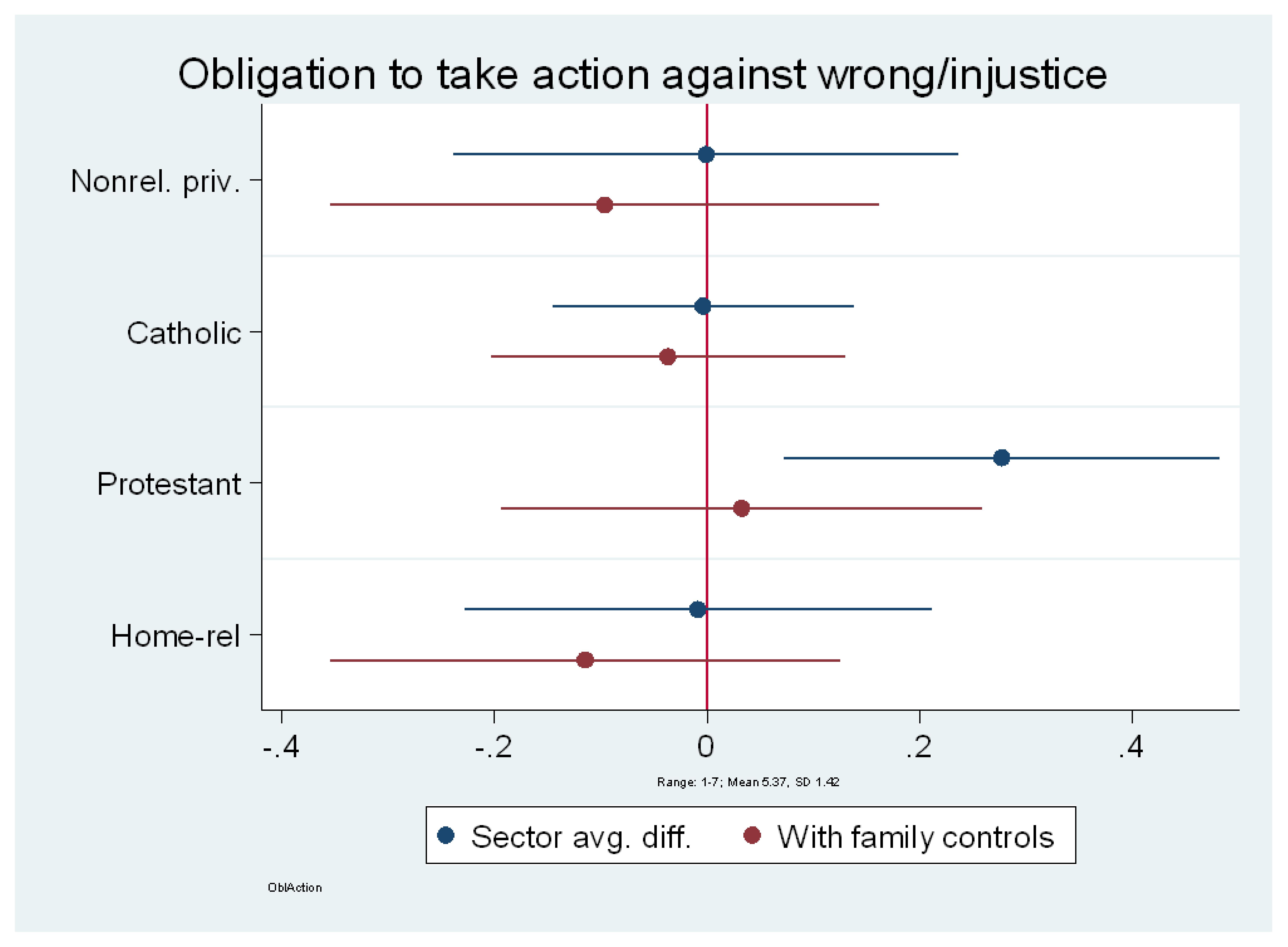 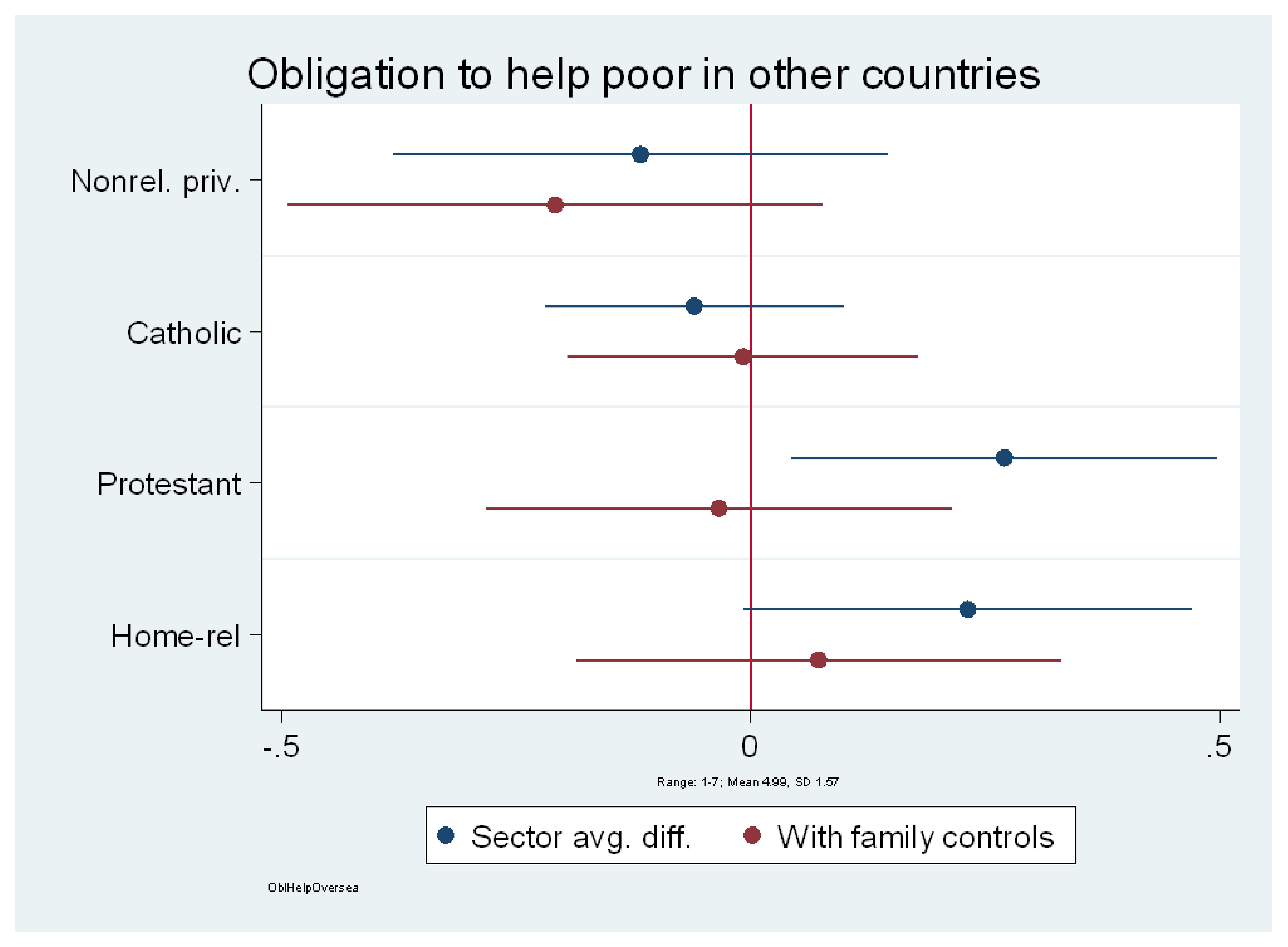 The 2018 CES data collects data on civic engagement by looking at activities both within and outside of a congregational setting, recognizing that church activities are not separate from the public good and that activities in these spaces are also contributing to the good of society. Churches have for long been involved in different kinds of public ministries, including working with the poor, the elderly, the socially isolated, new immigrants, and those suffering from various forms of addictions. In this way, churches play a crucial role in contributing to the public good of society. The CES data is clear in highlighting some important nuances in terms of the differently lived norms and patterns of civic involvement depending on school sector. 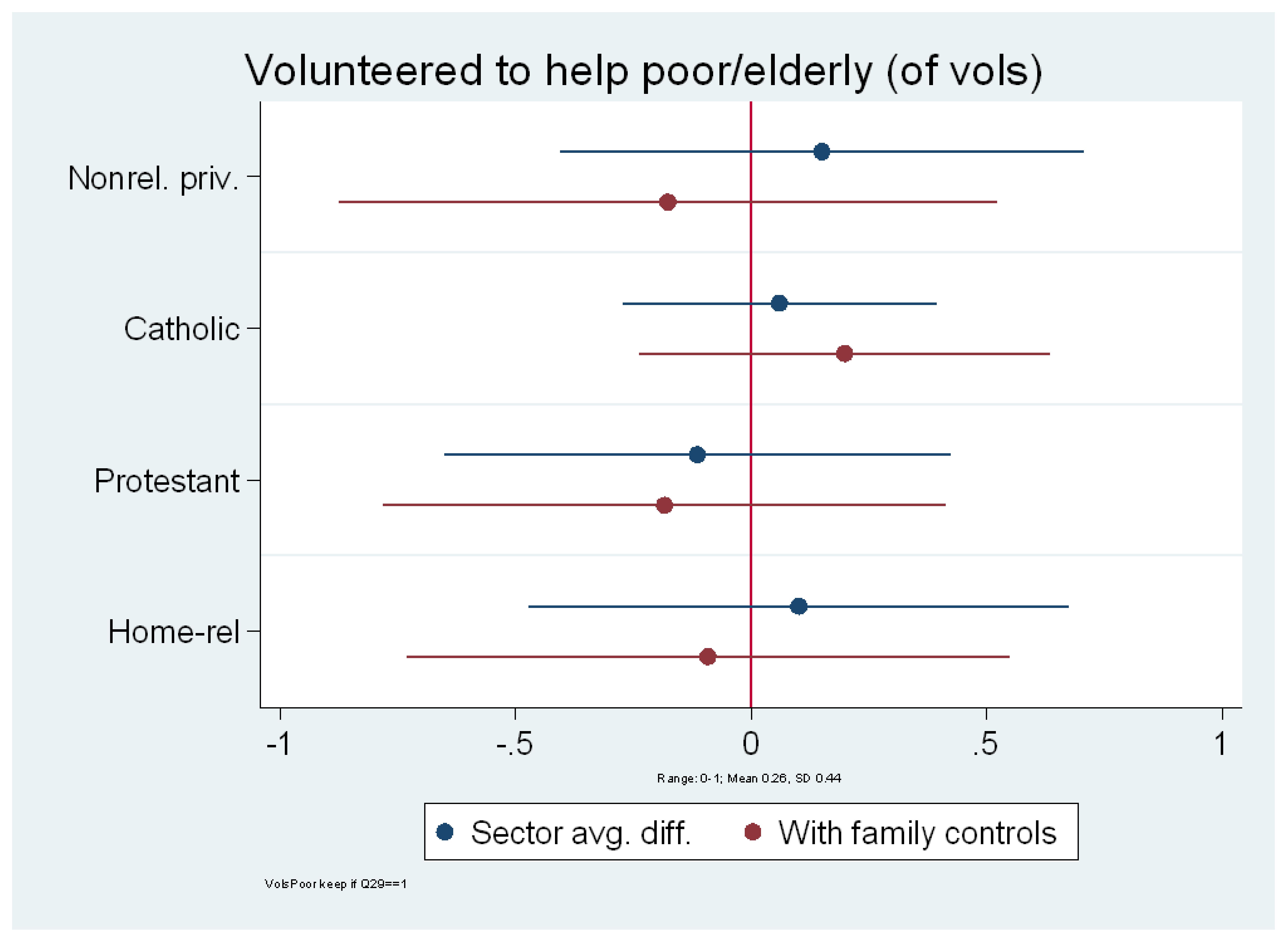 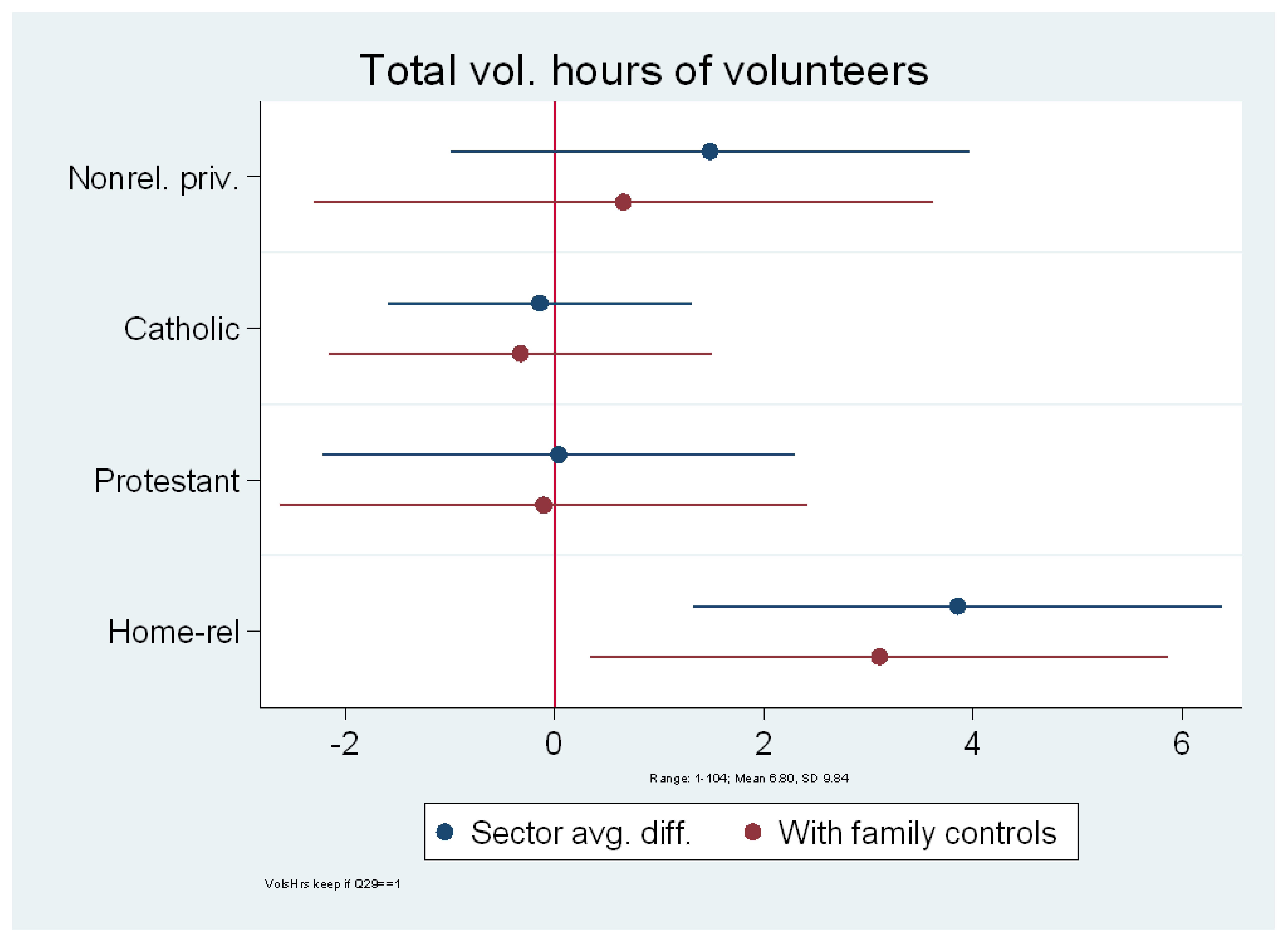 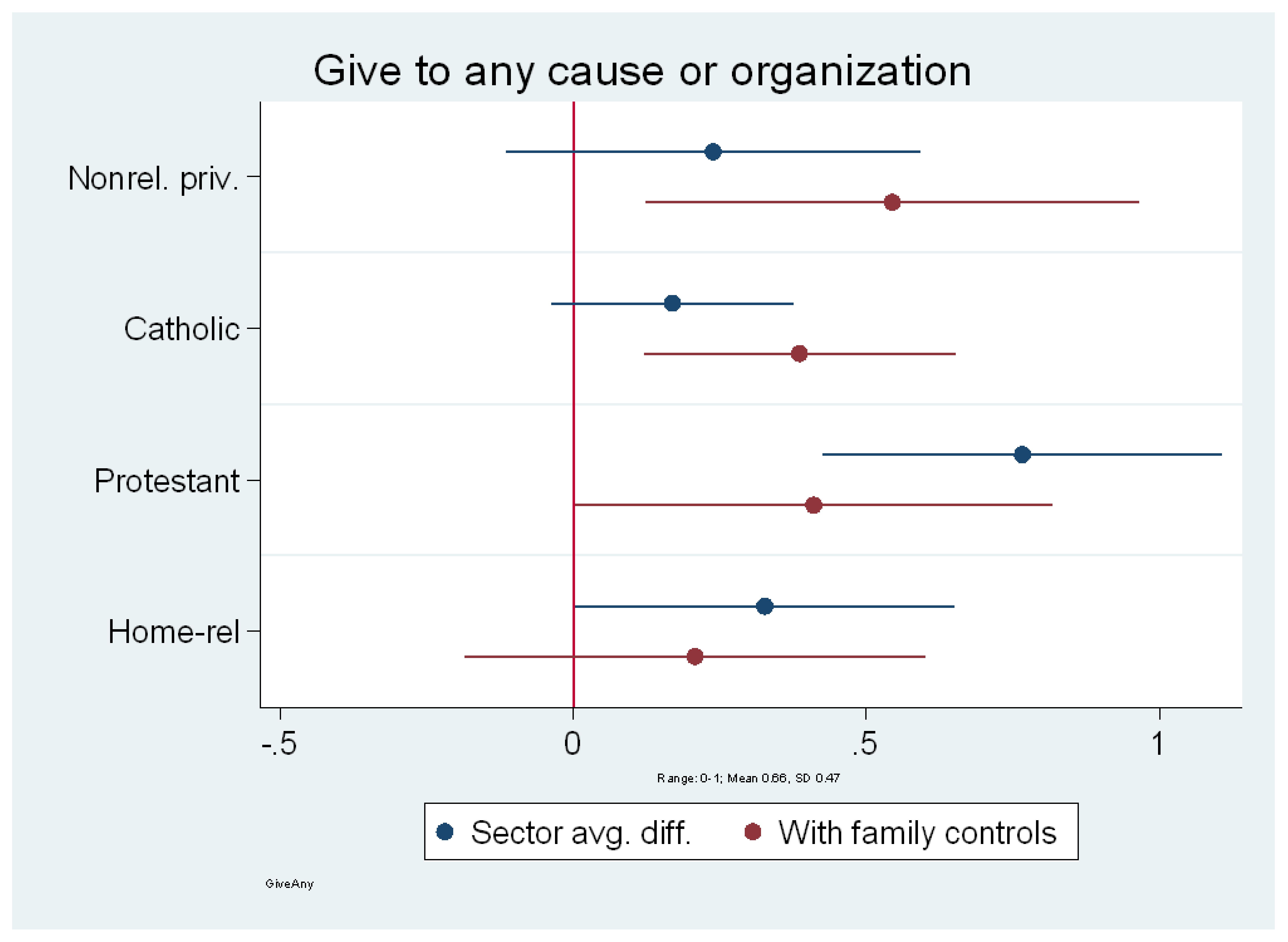 The story of the 2018 CES findings requires some nuance, but a number of patterns emerge in relation to trust, as well as political and civic engagement, when we analyze outcomes across the various school sectors. In terms of trust, we see that Protestant and religious homeschool graduates express lower levels of trust in politicians and the media. This may have important implications for how these groups engage both civically and politically and provides an important finding that is worthy of further analysis in the future. Importantly, however, we see that these groups remain very much engaged—indeed, offering higher levels of volunteer hours than public school graduates— but these efforts are taking place in particular areas. Protestant school graduates are highly involved in giving and volunteering in and for religious congregations and organizations, but this doesn’t preclude other forms of volunteering and giving. Mission and social-service trips are a strong suit of Protestant-school-graduate engagement, and many of these trips involve relief and development activities.

The 2018 Cardus Education Survey collects data on civic engagement by looking at activities both within and outside of a congregational setting, recognizing that church activities are not separate from the public good and that churches play a crucial role in contributing to the public good of society. Our analysis of this data highlights some important nuances in terms of the differently lived norms and patterns of civic involvement depending on school sector. Overall, religious school graduates are very active in giving and volunteering in their young adulthood years. Catholic school graduates are the most consistently positive on giving and volunteering, showing a higher likelihood of volunteering outside the congregation and donating to charity, including secular and political causes. In addition, Catholic school graduates are somewhat more likely to participate in mission and social-service trips than are public school graduates, and these graduates tend to be involved in a wide variety and number of volunteer causes and organizations, including health care, poverty, and the elderly and youth. Non-religious private school graduates are more likely than public school graduates to donate to charity and volunteer in the areas of health care, arts and culture, and political and international causes and organizations.

1) The 2018 CES respondents include 904 graduates who primarily attended public high school, 83 respondents
who primarily attended non-religious private school, 303 graduates of a Catholic high school, 136 graduates of an
evangelical Protestant school, and 124 who were homeschooled. In order to isolate the school effect for each of
these sectors, the analysis includes a large number of control variables for basic demographics (gender, race and
ethnicity, age, and region of residence), family structure (not living with each biological parent for at least sixteen
years, parents divorced or separated, not growing up with two biological parents), parent variables (educational
level of mother and father figure, whether parents pushed the respondent academically, the extent to which
the respondent felt close to each parent figure), and the religious tradition of parents when the respondent was
growing up (mother or father was Catholic, conservative Protestant, conservative or traditional Catholic). A control was also included for the number of years a private school graduate spent in public school. Despite our efforts to
construct a plausible control group, because families who send their children to religious schools or non-religious
independent schools make a choice, they may differ from those who do not exercise school choice in unobservable
ways that are therefore not accounted for in our study. Despite this, the CES use of an extensive survey instrument,
together with its comprehensive application of control variables and resulting patterns of outcomes, assures us with
some confidence of the accuracy of our school sectoral outcomes.