In 2016 Cardus Education delivered its second report on the Cardus Education Survey for Canada. Those reports—and this—present findings from surveys examining outcomes for secondary-school graduates of independent schools and public schools. The Cardus Education Survey makes a significant methodological, theoretical, and empirical contribution to the research into religious schools in Canada and the United States and is the only study that uses repeated measures to report on the outcome of religious non-government schooling and compares it to public-school outcomes. One of the main problems with existing data is the lack of attention to diversity within the independent school sector. In addition, regional differences in the impact of independent schools on students’ lives have not been carefully considered.

This report concentrates on Ontario graduates in 2018, drawing on graduates between twenty-four and thirty-nine years old who attended one of the following sectors in Ontario: public, separate Catholic, independent Catholic, evangelical protestant, and non-religious independent.

IN 2016 WE DELIVERED our second report on the Cardus Education Survey for Canada.1 Those reports—and this—present findings from surveys examining outcomes for secondary-school graduates of independent schools and public schools. The Cardus Education Survey makes a significant methodological, theoretical, and empirical contribution to the research into religious schools in Canada and the United States and is the only study that uses repeated measures to report on the outcome of religious non-government schooling and compares it to public-school outcomes.2 One of the main problems with existing data is the lack of attention to diversity within the independent school sector. In addition, regional differences in the impact of independent schools on students’ lives have not been carefully considered.

This report concentrates on Ontario graduates in 2018, drawing on graduates between twenty-four and thirty-nine years old who attended one of the following sectors in Ontario: public, separate Catholic, independent Catholic, evangelical protestant, and non-religious independent. The data for Ontario was conducted in April through June of 2018. The total number of respondents screened across all survey research firms was just over 38,000, and the final working sample of respondents who primarily attended high school in Ontario was 1,240. For this report, we classified each case according to the high school that the respondent primarily attended. Of the 1,240 cases, we had 599 non-religious public schoolers, 370 separate Catholic schoolers, 106 non-religious private schoolers, 63 independent Catholic schoolers, and 85 Protestant schoolers.3

Since they are the most common type of graduate, the public school graduates set the “benchmark” against which other sector graduates are compared and contrasted. Therefore, when you read “more likely” and “less likely” it will always imply the clause “than the graduates from public school.” Furthermore, it is good to keep in mind that public and non-religious independent speaks to the sector but is not synonymous with “non-religious” graduates. Religious Canadians attend public schools and non-religious independent schools; in fact, the majority of religious people in Ontario do. What we are looking at, rather, is how school sector has shaped that graduate into the adult they are today, independent of all other variables.

Our Cardus Education Survey report is undergirded by a set of assumptions about what type of people are needed for our shared life to flourish. These are people who are not only gainfully employed, intelligent, and capable of developing various skills. Such things are good, but our common life also needs people whose disposition is one of service, who give of their time, resources, and skills; who get involved with their churches and local political groups, and are committed to their families and their communities; who, ultimately, are capable of loving their neighbours. Our findings in Ontario largely support the findings of our 2016 Canadian report that independent schools do not create a socially elite enclave of detached and uninterested individuals. Rather, graduates from such school are as—if not more—civic-minded, public-facing members of society.

Cardus Education is publishing bulletins for Ontario and British Columbia in 2018. Don’t miss the other provinces’ reports: carduseducationsurvey.com

ONTARIO IS CANADA’S MOST populous province and thus has the most school-aged children enrolled in English-speaking non-government schools (although it does not have the highest percentage of children enrolled in such schools).4 Apart from degree-granting non-governmental secondary schools, the province has very little to do with curriculum compliance for many of these schools.

Unlike all other provinces except those east of Quebec, independent schools in Ontario do not receive any public funding. As in Alberta and Saskatchewan, however, Ontario fully funds Roman Catholic separate schools. This is a legacy of political compromises codified in the Constitution Act, 1867, section 93, which protects the educational freedom of the then-religious minorities in Quebec and Ontario.5 Consequently, all of Ontario’s more than one thousand independent schools must cover their operating and capital costs through tuition fees and other contributions made by supporters. This creates obvious barriers in making such schools a viable option for most Ontarians. Even so, independent enrolments have steadily, albeit slowly, increased in the province, rising from 1.85 percent of total public, separate, and independent enrolments in 1960 to 6.3 percent in 2016, about half of which are estimated to be religious schools.6 Ontarians, it seems, want a diversity of educational options.

The problem, though, is that such a decision assumes these independent schools do not provide significant public goods. And there is often an assumption that graduates from such schools are part of homogenous enclaves that, while strongly bonded within their communities, do little for the common good. As our past surveys have revealed, however, these assumptions are not borne out in reality. Graduates of independent schools have networks as diverse (or more so) than public school graduates, and are often much more engaged in all types of civic activities. In addition, graduates from independent schools—particularly religious schools—give more of their time and resources to a wide range of public institutions. Time and again we have seen that the assumptions about independent school graduates could not be further from the case. And in this Ontario report our findings are similar.

THE ONTARIO DATA REVEALS a continuation of trends regarding family noted in earlier reports:

Our findings reveal that Ontarians are just as likely or more likely to get a university degree if they went to an independent school.

How one views work changes based on the school sector; however, the types of work and likelihood of (un)employment remains similar across all sectors. 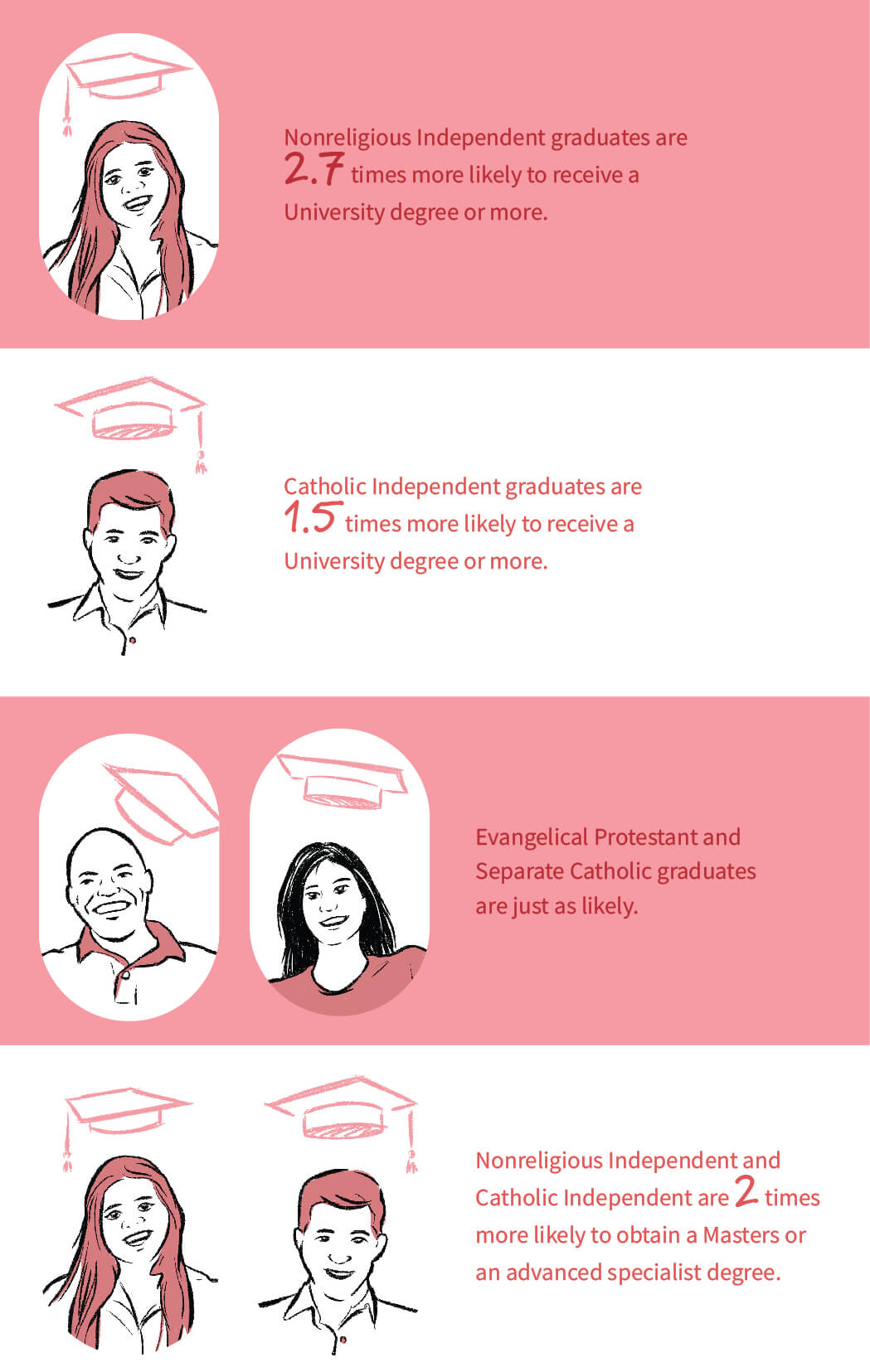 TRUST IS THE BEDROCK of a shared life together. Without it, we cannot live with one another for long. In terms of graduates’ civic orientations, our surveys have sought to find in what (or in whom) people trust. What we find is that graduates from religiously oriented schools have been prepared for a robust civic life.

Want to learn more about this?

Comment Magazine, Cardus’s flagship journal, dedicated an entire issue to TRUST: “This issue analyzes the social dynamics of trust from different angles and constructively considers how to reweave the web. Generating a diagnosis is important, so woven throughout this issue are multidisciplinary accounts that give us insight into the sources of our cynicism—from fake news to ubiquitous surveillance to the broken realities of racism.”

IF TRUST IS THE CONDITION in which civic, shared life is made possible, the development of social bonds is the visible manifestation of our views of others. As we argued in 2016, it is hard for one to love their neighbour if they are not in any form of meaningful relation. And as we showed in 2016, the non-public school graduates have a diverse range of social ties. 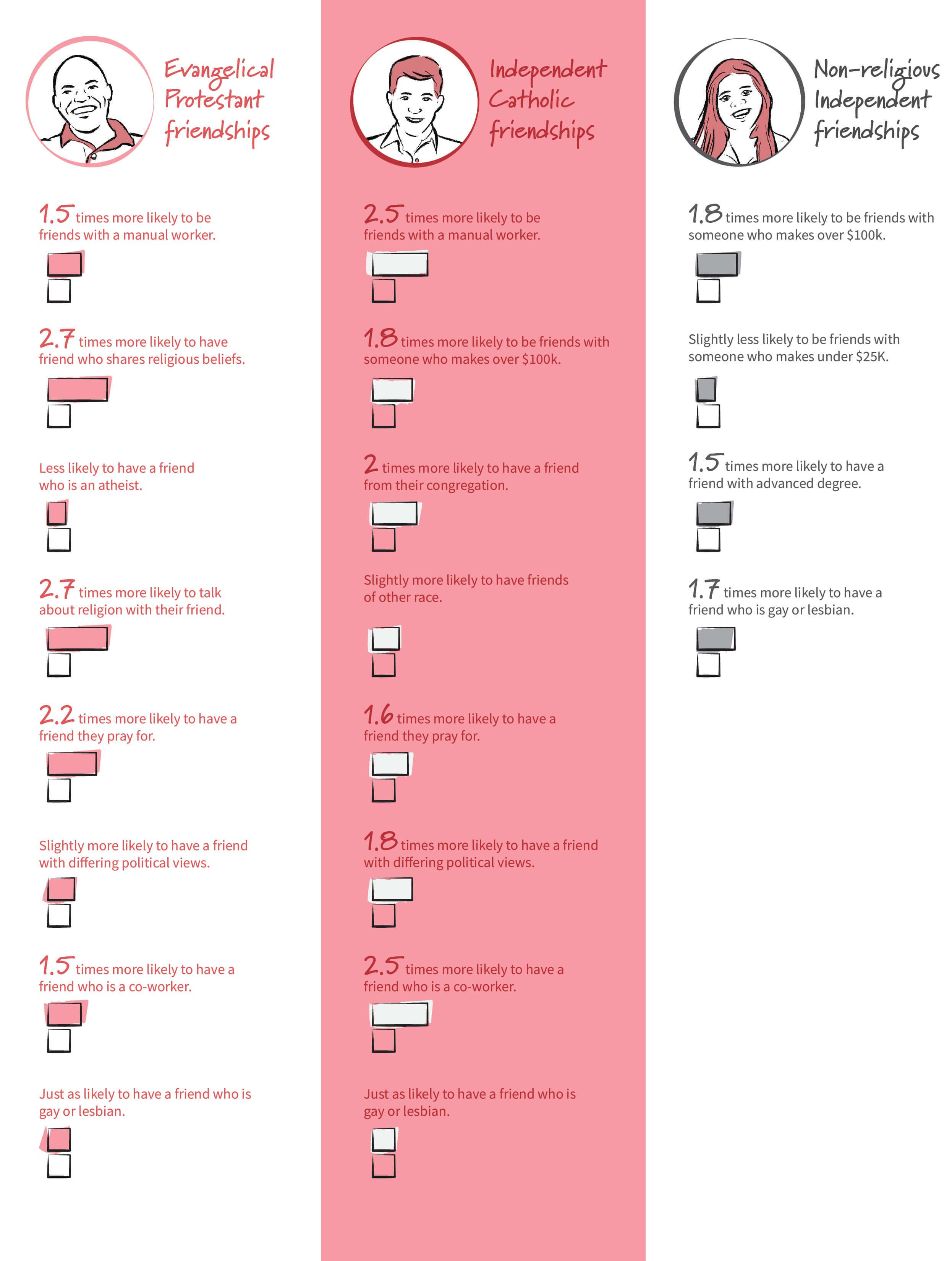 One of the true measures of publicly minded graduates is in their desire and ability to give of their resources and time and skills in service to the common good. Our findings in Ontario reveal that independent religious school graduates are just as, if not more, prepared to create an adult life marked by a capacity to give. The categories for volunteering and giving you will find below were largely derived from the most recent Statistics Canada survey.

It is one thing to give and volunteer as ways of being publicly active. However, political involvement is perhaps the most explicit way to measure how involved graduates are in the shared life of their province.

A unique aspect of our education reports is that we are intrigued by how education shapes one’s adult beliefs and their behaviours in the home, long after students have graduated and created their own routines and rituals. And while eating meals as a family, for instance, might seem a bit far afield from relevant graduate-outcome data, such findings are significant markers of social connection and resilience. 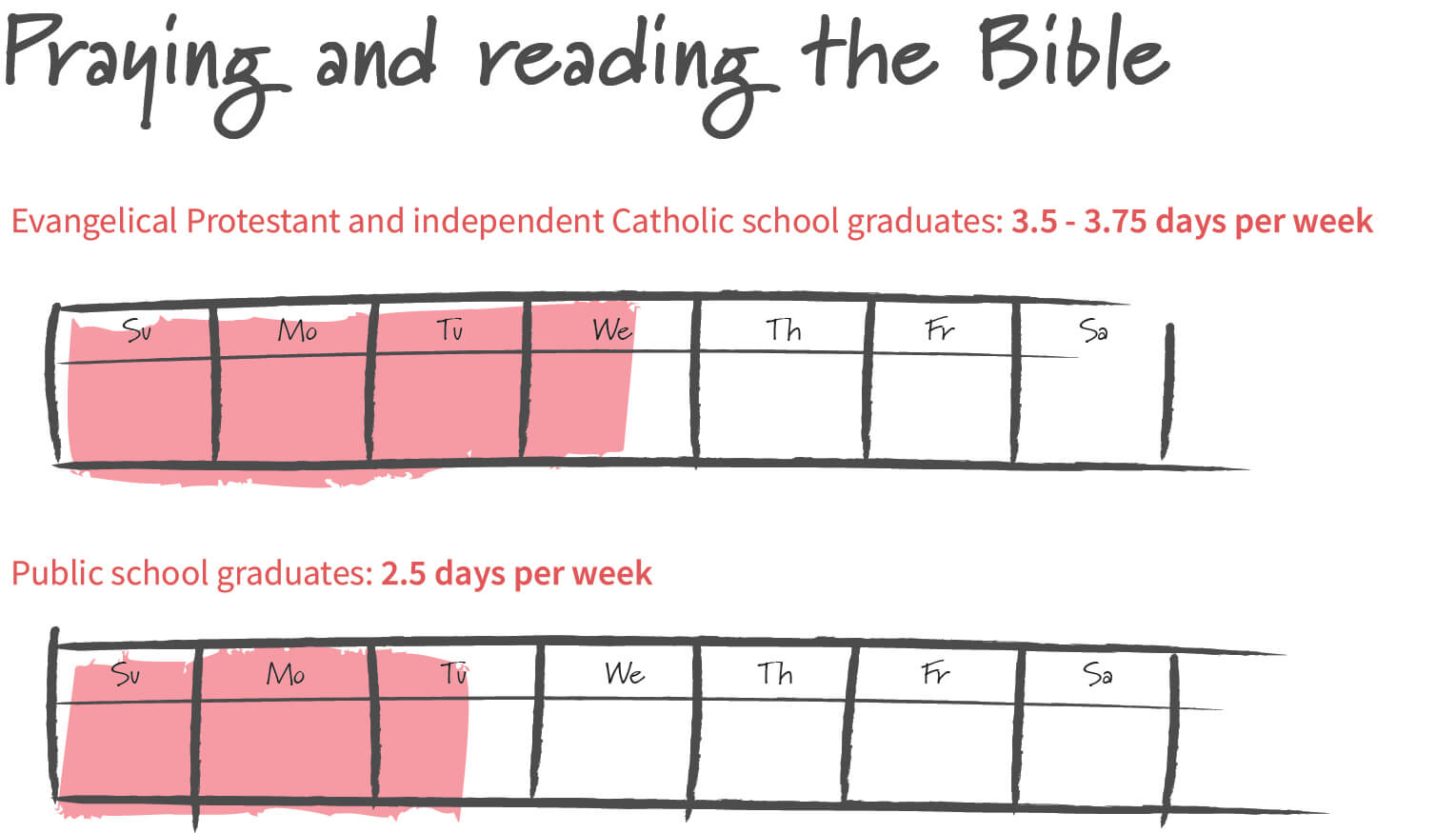 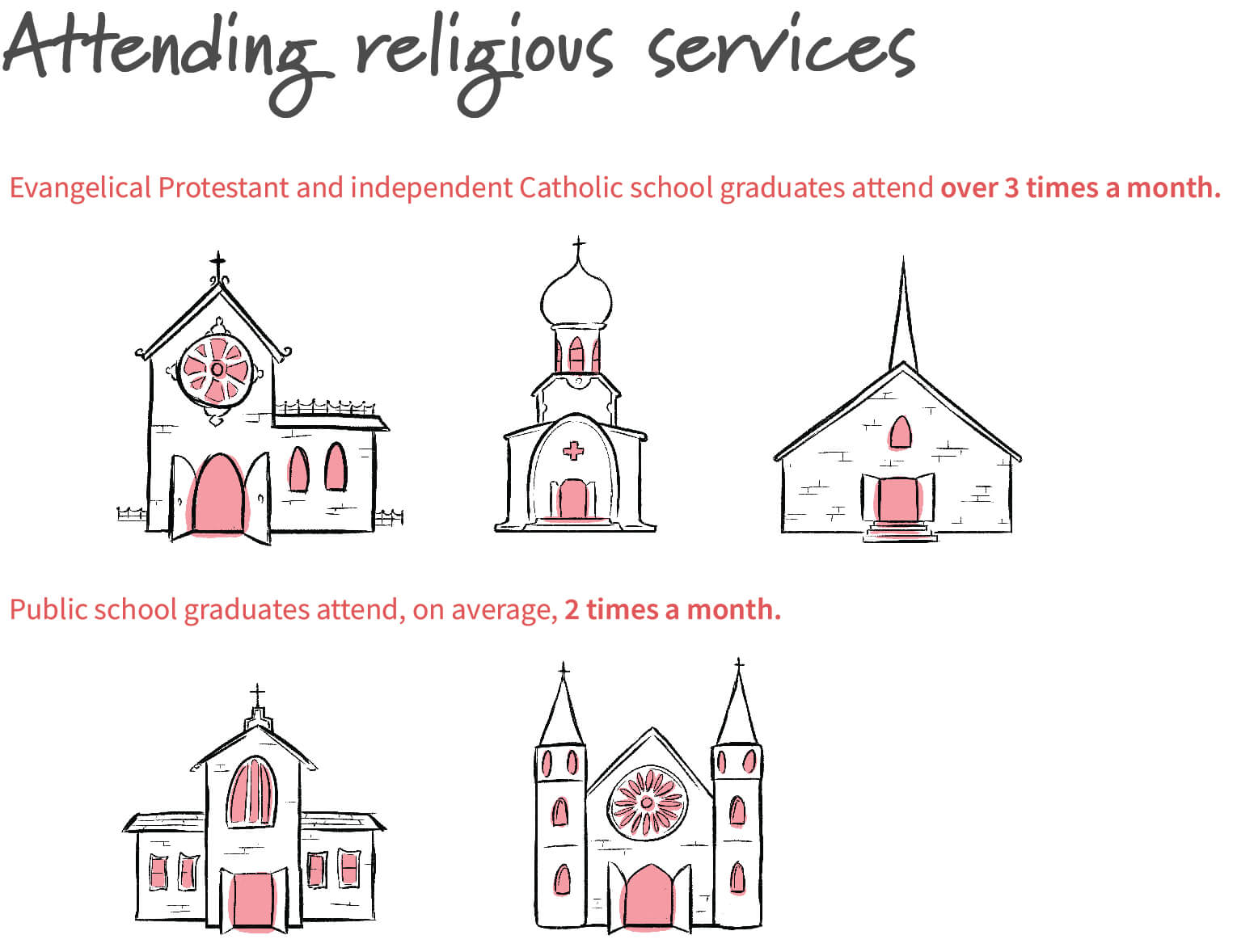 FINALLY, HOW GRADUATES look back on their experiences is important. With a little experience, one can look back and have a better sense of whether their school really prepared them for life beyond its walls. In Ontario, the following is what we found when it comes to how graduates assess their school sector:

In sum, the Ontario findings largely corroborate the narrative told in our previous reports: private education is a public good. Graduates from such schools are just as likely (and often more likely) than their peers in the non-religious public sector to cultivate diverse social ties and be active and engaged members of their communities, committed to the well-being of their neighbours, and ready to give of both time and resources.

3) There are also seventeen religious homeschoolers; however, due to the limited nature of this sample size, we have not reported on our findings for this group in the following report.

5) This protection no longer applies in Quebec, but it was extended to Alberta and Saskatchewan when they became provinces.