Canada’s charitable sector will prove essential in helping those in need through the economic, social, and emotional hardships of the pandemic. But the sector is reeling from the effects of COVID-19 on its revenues, and this is why government partnership is needed. Cardus has proposed an innovative matching-funds initiative to help sustain charities through these times. Such a program need not be viewed as entirely new spending by the federal government.

The COVID-19 pandemic is exacting a devastating economic and emotional toll on individuals, households, and businesses alike. Charities have also not been spared these hardships, and yet it is charities that offer an essential safety net during such times. Food banks, shelters, and other charitable organizations are often best placed to provide relief and front-line support to those in need.

“...The Charitable Donation Tax Credit will be $521 million to $1,042 million lower than the federal government projected for 2020. Up to 80 percent of the cost of the proposed matching donations program can be covered by those savings.”

To support these essential organizations, Cardus has issued a Call to Action for the federal government and civil society to work together, with Ottawa matching citizens’ donations dollar for dollar (Speer and Dijkema 2020). The estimated cost for this four-month matching initiative is $1.25 billion in federal funds, which would be spread among the provinces and territories based on their share of the national population.

Some may question whether the government should be further increasing spending when the Parliamentary Budget Office estimates that the federal government’s current response to the pandemic will cost $145 billion in the 2020–21 fiscal year (PBO 2020). Our response is twofold. First, it is important to recognize the critical role of the charitable sector in assisting Canadians through these difficult times. And second, these funds will not necessarily represent new spending, since the federal government is expected to lose less revenue from its Charitable Donation Tax Credit because of the economic decline associated with the pandemic.

But how much less revenue are we talking about? This paper seeks to estimate the change in the cost of the Charitable Donation Tax Credit to the federal government and thus how much of the spending on the proposed matching program should not be thought of as new spending.

The history of the Charitable Donation Tax Credit in Canada dates back over one hundred years. When the credit was first introduced in 1917, during the First World War, it acted as a deduction “for amounts paid during the year to the Patriotic and Red Cross Funds, and other patriotic and war funds approved by the minister” (Department of Finance 2020). Since then, the scope of the credit has been greatly enlarged, and it is currently a non-refundable tax credit for donations to registered charities, registered amateur athletic associations, and other qualified organizations.1 In 2019, the value of the credit is based on the lowest, second highest, and highest federal personal income-tax rates. The credit rate is 15 percent on the first $200 of annual donations and 29 percent on annual donations over $200. If an individual has taxable income over $210,371, then they receive a 33 percent credit on annual donations over $200.

The Charitable Donation Tax Credit serves a social purpose; it is aimed at inducing increased support for the critical work done by the Canadian charitable sector.2 In 2017, approximately 5.4 million individuals and 2,700 trusts claimed the credit. The cost of the credit to the government in terms of forgone revenue is displayed in table 1. It is projected that the cost to federal government revenues from use of the credit would have been almost $3.2 billion in 2020 (Department of Finance 2020). Based on past instances of the effect that economic downturns have had on use of the credit, however, this use, and thus the cost to the government, will decline this year.

Reduced Use of the Credit

The 2008–9 Great Recession serves as the starting point for our analysis of the effect that the pandemic may have on the use of the Charitable Donation Tax Credit. During the 2008–9 recession, the cost of the credit to the government fell by 11 percent (Department of Finance 2014). Yet the economic impact of the COVID-19 pandemic will be much greater than that of the recession, from which Canada was relatively spared, compared to other advanced industrialized countries.

For a sense of the differing scale of economic effects, consider a comparison of the unemployment rate and the decline in GDP between the Great Recession and the current pandemic. During the Great Recession, the unemployment rate peaked in the summer of 2009 at 8.7 percent; in April 2020, Canada’s unemployment rate reached 13 percent, one and a half times greater than it had been during the 2008–9 financial crisis (Statistics Canada 2020b). The comparison of the fall in GDP is even starker. In total, Canada’s GDP during the Great Recession declined by 3.3 percent between the fall of 2008 and summer of 2009 (CBC News 2010). During this period, month-over-month declines in GDP were never higher than a little over 1 percent. From February to March 2020, Statistics Canada estimated that Canada’s GDP fell by 9 percent, almost three times greater than the total decline during the 2008–9 financial crisis (Statistics Canada 2020a).

While it is also not clear at this point how much Canada’s national income will fall over the course of the pandemic, it is clear that given the disparity in the economic damage between the pandemic and the Great Recession, use of the Charitable Donation Tax Credit will likely fall by a greater magnitude.

Using the Great Recession as a starting point, we have scaled up the decline in the use of the tax credit by a factor of 1.5 and 3, based on the comparison of unemployment rates and GDP declines discussed above. This indicates that the almost $3.2 billion estimated cost of the credit will fall by 16.5 to 33 percent.3 Table 2 presents the results of our analysis, providing a range of estimates that can be used to assess savings to the government from lower claims of the credit. 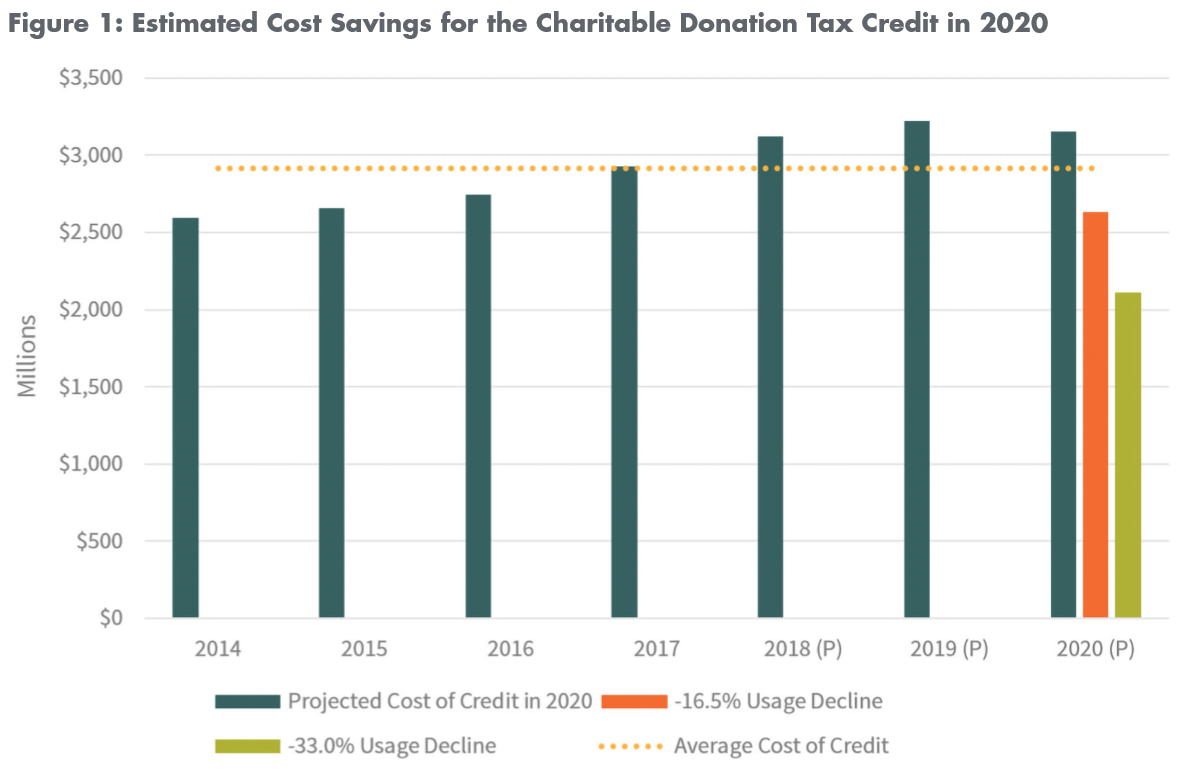 The results suggest that claims of the Charitable Donation Tax Credit will be $521 million to $1,042 million lower than the federal government originally projected.4 When we compare this with the estimated cost of the match program outlined by Speer and Dijkema (2020) at $1.25 billion, we conclude that much of this cost would not be new—in the sense that the government had already budgeted for lower revenues based on the anticipated use of the credit. In the higher-end scenario, over 80 percent of the cost in the match program can be thought of as coming from the additional revenue that the government will realize from lower use of the credit. 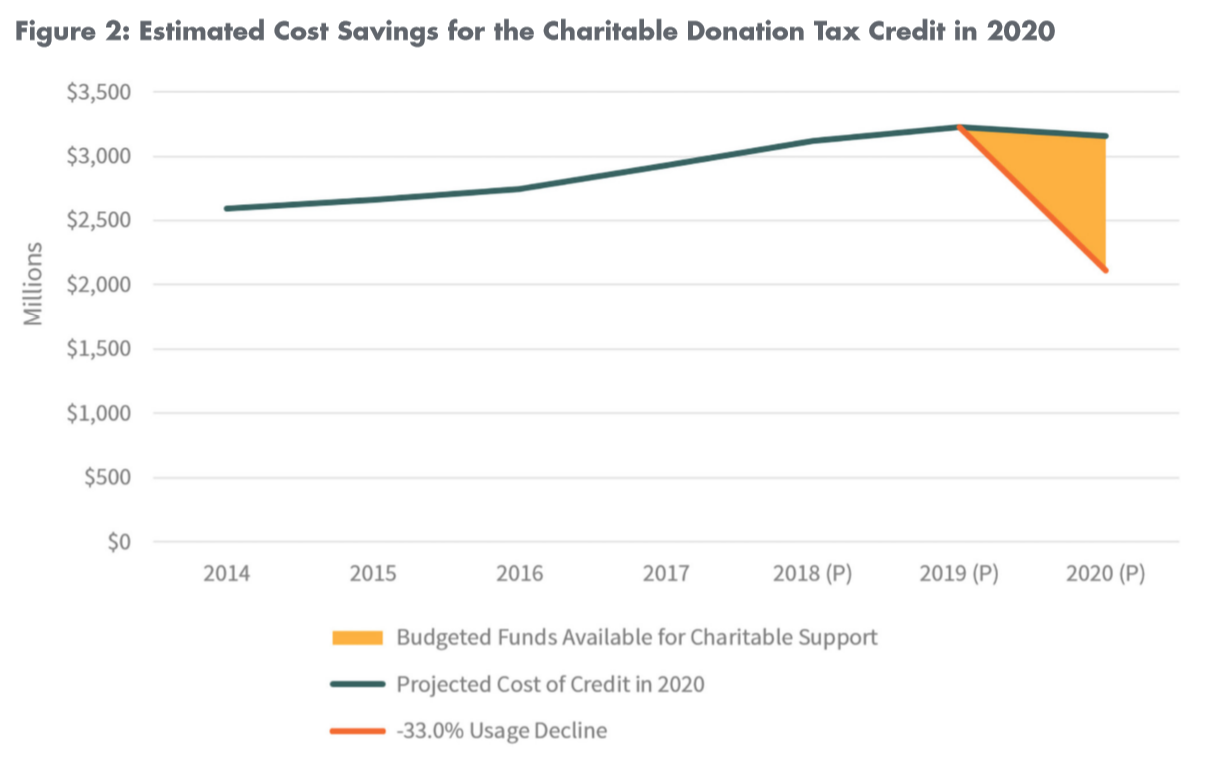 Canada’s charitable sector will prove essential in helping those in need through the economic, social, and emotional hardships of the pandemic. But the sector is reeling from the effects of COVID-19 on its revenues, and this is why government partnership is needed. Cardus has proposed an innovative matching-funds initiative to help sustain charities through these times. Such a program need not be viewed as entirely new spending by the federal government. The federal government indirectly supports Canada’s charitable sector every year by forgoing revenue as part of the Charitable Donation Tax Credit. Past data demonstrates that during economic downturns, use of this credit falls and thus the loss to government revenues is not as large as projected. The federal government could use this unexpected additional revenue to fund part of the matching program, and, in this sense, this expenditure need not be considered as new spending. It could, however, prove to be a crucial lifeboat for keeping Canadian charities afloat in the near future.

2) There is some evidence to suggest that the tax credit has been successful in supporting charitable giving. See Department of Finance (2015).

3) While the 33 percent figure is an upper-end estimate, there are a number of points that support its plausibility. First, Lasby (2020) has found that charitable organizations have already seen their revenues fall by 30 percent on average, and these declines may continue as the economic disruption from the pandemic continues. Second, it is expected that the COVID-19 virus will experience a resurgence in the fall and winter, and this will also weaken economic activity and affect the yearly claims of the credit.

4) By way of comparison, if the use of the credit fell by the 11 percent that it did during the Great Recession, the cost of the tax expenditure would be almost $350 million lower.